Bad days, not so bad days.  It's a crap shoot.  I have to play it by ear.  Every day.
There's something to learn here.
I know it.


The other day, L put her first sectional warp on....ALONE.

It had to happen.
Usually, we do them together, and they are pretty uneventful.
But I decided it was time.  She needed to do a solo. 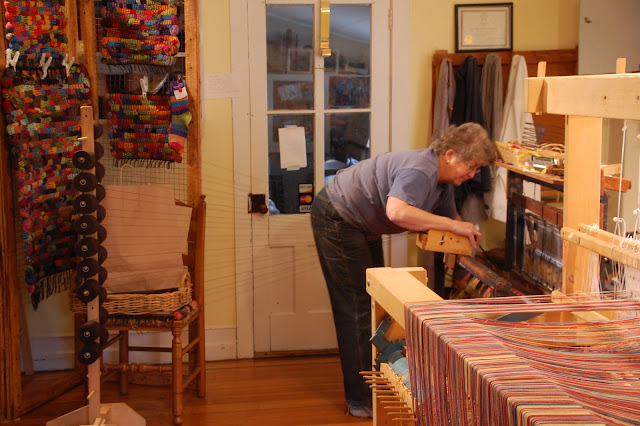 Back in the day, I had to teach myself how to sectionally warp.  My first attempt wasn't pretty.
Subsequent attempts became easier, but I made a lot of mistakes.  And I learned.
Nothing teaches quite as well as experience. 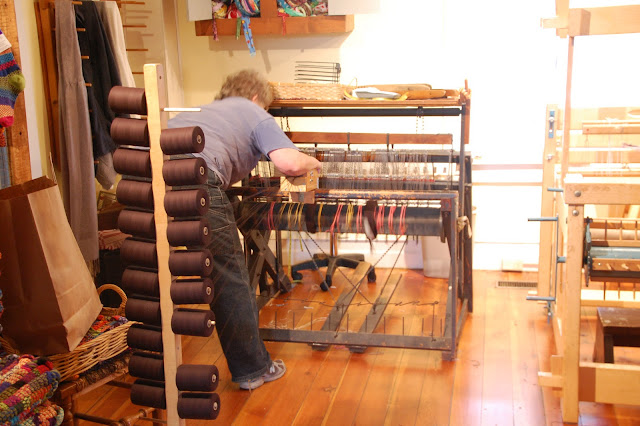 Even though I was in the room with her, I stayed out of it.  And she got it done.
She threaded the heddles, and then the reed.  It looked pretty good.
Today, when she was weaving on it, she had a couple of issues.....a thread that kept breaking, and some tension problems.  Nothing that she couldn't compensate for, just enough to annoy.
But that annoyance is a great teacher.
She'll do it better next time.
And if she is anything like me, she will still make mistakes WAY down the road.
And she'll keep on learning from them.

Another day of quitting early.  I had no plans of accomplishing anything else, but I promised Roy a walk.
No matter what.

Somehow the sound of this water, and the sun glinting off it, made me feel good. 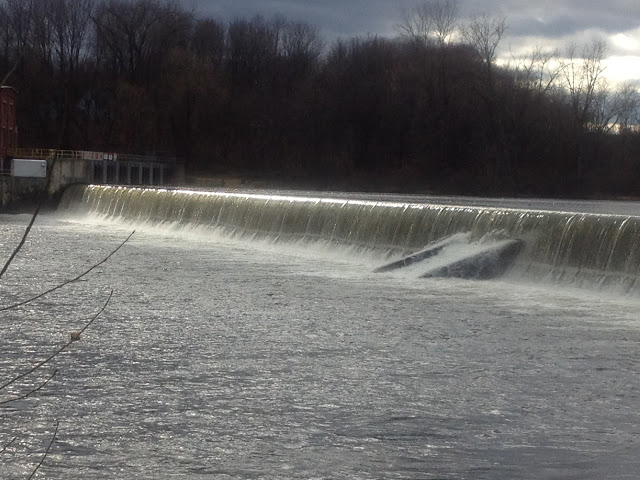 Roy would rather pee on trees, than  sit still while I admire the falls. 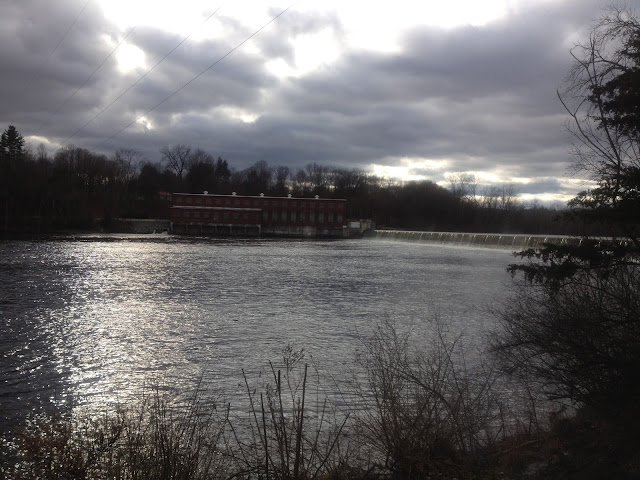 Good for L!!! And yeah, still making mistakes after 20 years! :-D Wishing you peaceful moments and pain free days...that is such a wonderful place to walk!

Such an incredible place to walk. And to pee on trees:-)

I read about your latest diagnosis and it said that the symptoms generally go away on their own. If that's true, I hope they hurry up and get on outta your life. In the meantime, can they change your pain medication?

Good for L!! She has been such a trooper and so dedicated to learning. Good job, Teacher.

I really like the way you are looking at things, and so glad you have Roy to spur you on to getting out and away for a little bit each day. and GREAT job on the warping for L!!!

Thinking of you often... are you having the surgery to correct the brain realignment? I also read that it can correct itself, meaning symptoms, over time in some cases, but I don't know if the circumstances are different.

Congratulations L!! I would not have the patience, it's just the truth.

You'll be back in Maine before you know it... how times flies and all that... MINUS the headache. Look forward to those days.

I'm not a super religious person, but I am praying for you, Hilary. I think about what you are going through, and I can't imagine. Yet, I read your positive spirit and I know that soon, relief will come. Sometimes it's the smallest things that give us the most joy...and yet the small things, can also cause the most pain...who'd have thought such pain could come from a fall? Courage, my friend...and remember, Christmas is a time for miracles...big and small...it's in our perspective, you know... Hang in there.

Maine is thinking about you, too, Hilary. ;o)

I'm no expert, but it seems that if you've had the condition all your life, that the pain you are now experiencing really could be from the fall you had a while back. My oldest daughter has cardiogenic syncopy which has caused her to faint on many occasions. She has had multiple concussions and began experiencing bad headaches a while after the last head injury. She has now been diagnosed with epilepsy (the silent kind) because of the traumatic brain injury. As for now she cannot drive, is pregnant (a surprise!!!) and suffering from hyperemesis--had to go off all her heart and antiseizure medications. She's also suffered sepsis from the iv pic line and a blood clot during this pregnancy. It's a little overwhelming to say the least!
I hope you can discern which doctor to stay with. It's disconcerting to get a totally different opinion--but you know surgery is never without risks. Praying you get some relief and can enjoy the peace of the season!
V

I was thinking of you today - you have so many things on your plate at one time besides the headaches. So glad Roy found you :)

All I can say from reading your blog is that you are one stubborn woman....Kudos to you for not caving to the pain and just doing it....whatever it is for today. Your attitude is amazing and if nothing else, *I* am learning that pain does not have to make your world stop. Thanks for letting me observe that. It has given me something to think about. L.is doing fabulously...and does that waterfall freeze up when winter freezes you over? Prayin for better days ahead...

Oh, God. Sometimes it's so hard to come here because I can imagine the pain, and to live it, it breaks my heart.