My little boy Roy is hurt.   We don't know exactly how......but he doesn't want to jump up on the couch, and he really isn't liking stairs.  So something is bruised, or sore, or just plain hurts when he tries.
He went for a little walk this morning, and seemed fine, as long as he was trotting along, on a flat surface.

What I think may have happened, is that he injured himself with his mad dash to the back door.  When he is done in the back yard, and he is ready to come in, he FLIES across from the back corner to the porch, and when he gets to the porch, he LEAPS through the air, missing all the stairs, making a crash landing.  It's frightening.

He is eating, and drinking, and doing all the other things you want him to do, but it is clear he is having a pain issue.
Ah, I get that.

This morning, L and I finished up an order that we have been working on, TWO 5'x7' rugs.  The customer was adamant, they had to be BRIGHT.     She repeated it:  BRIGHT.
We think we got it just right.
What do you think? 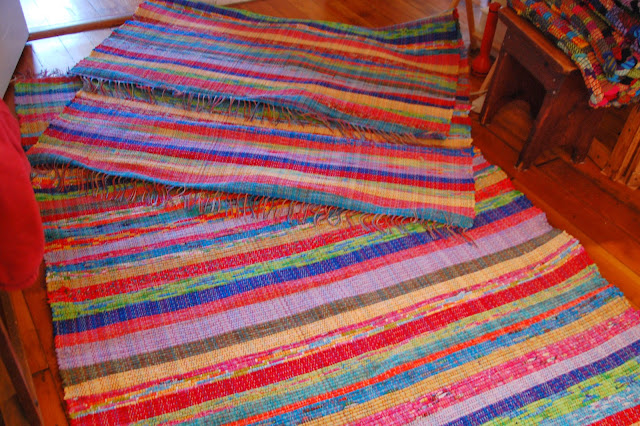 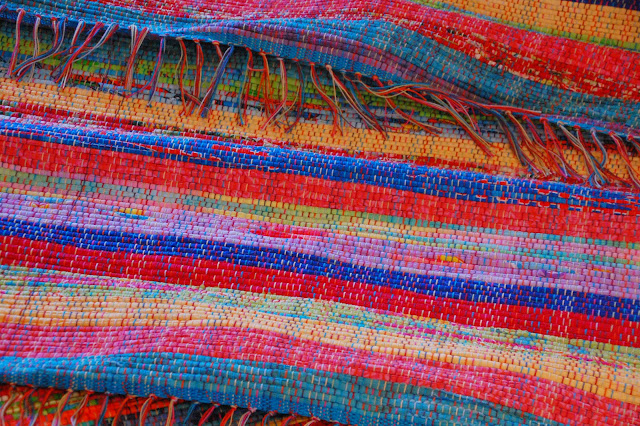 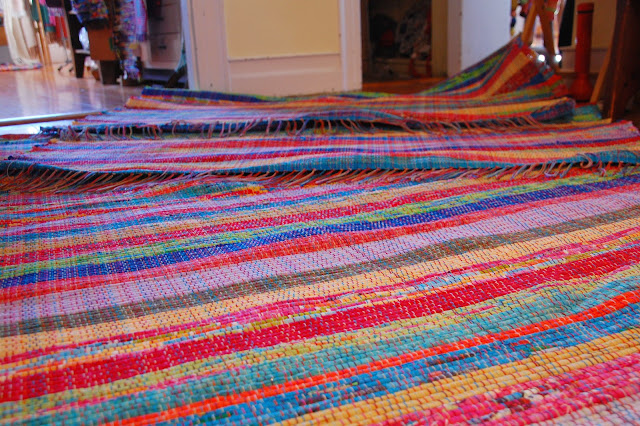 But by 12:30, I was ready to throw in the towel.  A girl can just take so much pain.
So I headed home.
The couch was bathed in sun, and Roy was ready to keep me company.
Then my mother came around the corner, waving her grocery list.
You're kidding, right?

I took a deep breath, and we headed to Hannaford, the nearest supermarket.  It was either that, or go myself with her list, and hope I got it right.

Taking my mother to the grocery store, and putting her on a motorized cart, is like  putting a 6 year old on one, with a list, credit card, and a sweet tooth. As awful as it seems, I try to avoid her while we are in the store, because if she sees me, she will send me hither and yon, to get this or that.  My reasoning is that she takes very little responsibility for anything, and as long as she is capable, it is a good thing to encourage her to keep doing it.
She buys mostly candy, cookies, ice cream, magazines, potato chips, with an occasional head of Boston lettuce and some teabags thrown in.  Or maybe a package of HAM.
She eats with us every night, so dinner is not her main concern.
But hey, if I want to know what's going on in Hollywood....OR, if I want a snack........I know where to go.
And the shopping is done, and that's a good thing.

So if you'll excuse me now, Roy and I want to check out the backs of our eyelids, right Roy???

If I hired you to weave a rug for me, there is no way I would be able to put it on the floor.

They're just too gorgeous.

My little Obe has acted just like that and I found out from the vet that he hurts his back. There were times when he would go to jump on a chair and hit the arm and fall back. That was enough to injure him and he wouldn't jump up on the couch and acted very meek...The last time he hurt himself he was running up stairs and bonked into the riser. Bed rest for 10 days. really. In his kennel for 10 days. Carried out the kennel for him to do his business, carried it back in. Feel down his spine gently with thumb on one side and forefinger on the other and squeeze...he should tell you by wincing where it hurts! Good luck, Hilary. Sorry you are both in pain! But the colors are bright and beautiful!

wishing you and Roy better times with your pain. Goodness... he sounds like a wild man! LOL

Your rugs are so cheerful!!! I'm sure the new owner will love them.
Hope you had a good time checking the insides of your eye lids and Roy is feeling better.

I need to give the inside of my eyelids a thorough going over too. That will have to wait til a little later.
Sorry that Roy is feeling poorly too. He's sympathizing with you in his own way.
I hope you both get to feeling better SOON!
Love the colors of those rugs. I am sure the new owner is going to be extremely pleased. They are beautifully bright!

This rug reminds me of the sun, love, life, and joy. It is lovely. You put a lot of yourself in these rugs for you clients. You and Roy rest, recharge, heal and rejuvenate on day at a time. 2012 will be a good year.

Awww poor you and Roy.. you can each commiserate. Your rugs are so beautiful and cheery and the photos of your granddaughters and Roy are absolutely adorable.

I have a chocolate lab (Bryan) and he has been feeling the exact same way the last 3 days. I even used pavers to make a short step to the porch so he didn't have to lift his leg as high. I wish you both well and I hope you find relief soon. Blessings to you and Roy.

Buy some Dog Gone Pain for Roy. And have you thought about Acupuncture or Chiropractic for Him. I work for a Vet in NJ and that is all she does....
Betty Gonter
bettygon@ptd.net

My friend's pit had the same symptoms.. turned out to be a bruised back from playing around somehow. You're probably right.

Oh.. and.. THOSE RUGS ARE GORGEOUS!!! LOve the choice of colors.

You and Roy are well suited in so many ways! But you knew that...

I like you, I do!
Your posts are simple and to the point. That's a compliment by the way. At least from me it is.
Take care of your poor puppy. My 14 year old is not long for this world. It's going to be a sad day when that happens. My kids don't know life without him.
And your Mother is a trip. I would totally die for some Grandma Uts about now. If I weren't so "tipsy", I run to the store and buy a bag.
Oh listen, I'm curious about these migraines of yours. Did you mention, in the "tenth week". I couldn't handle that. Mine last for three days at a time and I down Zomig ZMT like it's candy.
Take care of yourself.
Your Friend, m.

Hoping that Roy Boy is feeling better soon, I'm with some of the other folks and think that it is back related. Maxine (our older Wheaten) was diagnosed about 12 days ago with a slipped disc. Bed rest since then, minimal activity and no stairs! She is doing better, and we hope Roy starts feeling better too!