We all wanted to hike the Great Head Trail, but someone had to watch the kids on the beach, so we took turns.
Holly and I went first. 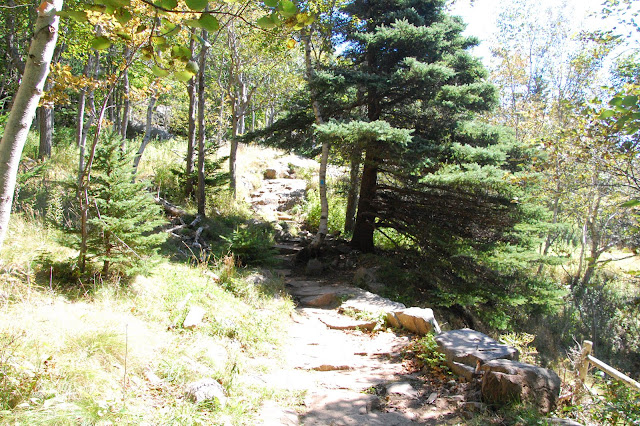 If I had paid attention, I would have remembered that Kate over at Chronicles of a Country Girl said in her post about this, that to go from Sand Beach was not conducive to happy knees.
And you know I have the FTK, right?
But I didn't, and so we took the hard way.
Don't tell me you're surprised. 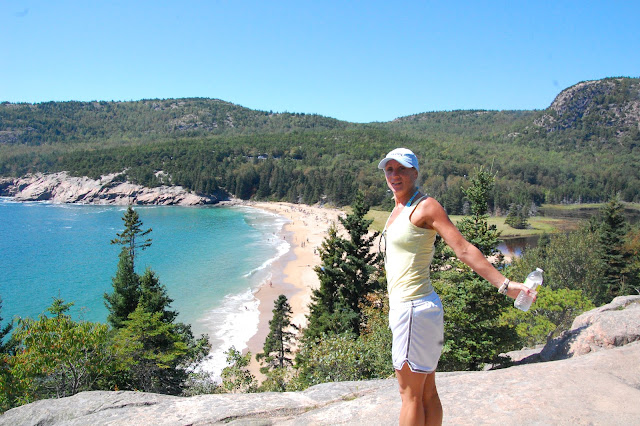 The climb was short, but steep, and so worth it. 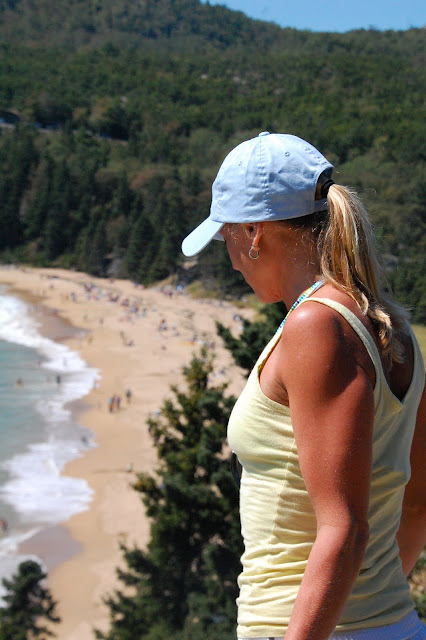 I was guarding my camera with the new lens like a newborn baby, at the same time, being oh so careful not to fall.
Had my fall for this summer, thanks.
And not in any hurry to spend time in an ER in Maine. 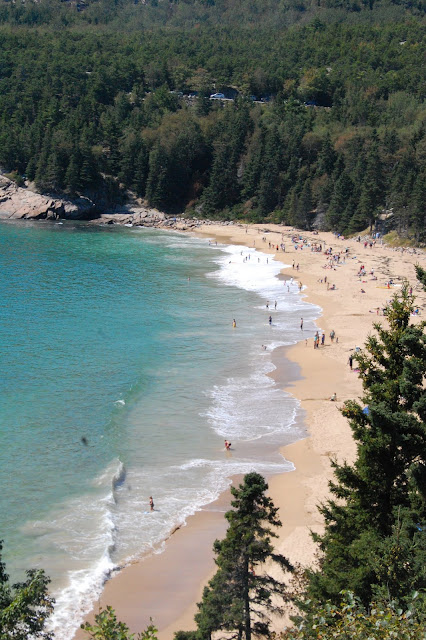 My new lens is marvelous though.......everything I need in ONE lens.......heart be still.  Yes, it is a little bigger, a little heavier, but the trade off is one I can live with. 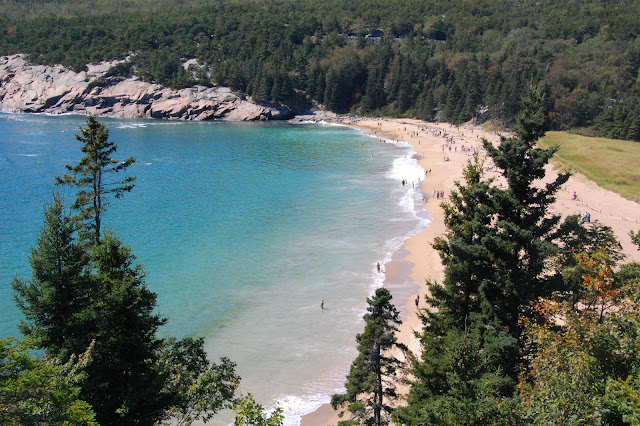 Feel free to take this picture for your desktop.  I did, and every time I open my lap top, I sigh.
Honest. 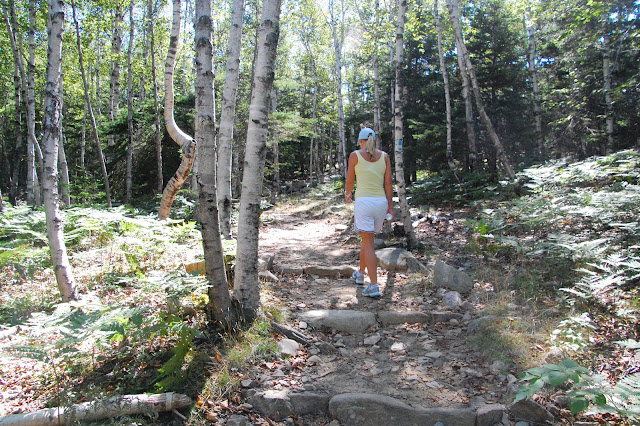 Now if all the trail could look like this one, it would have been sweet. 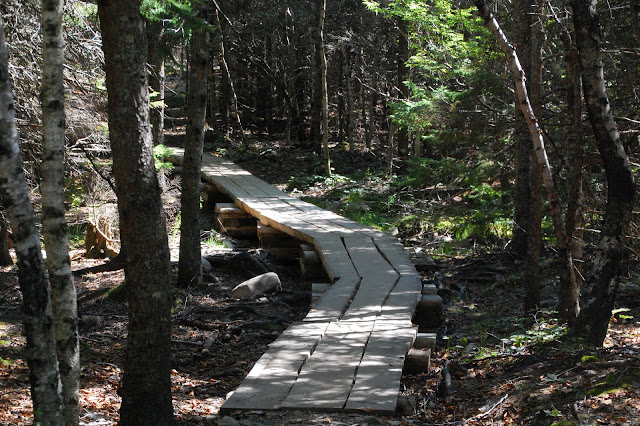 Or even this.
We decided to do the circle at the top, and this was just the teaser.
It got harder.
My daughter had not one moment's problem, but with age comes, alas, loss of limberness, spryness, confidence on rocks, you name it. 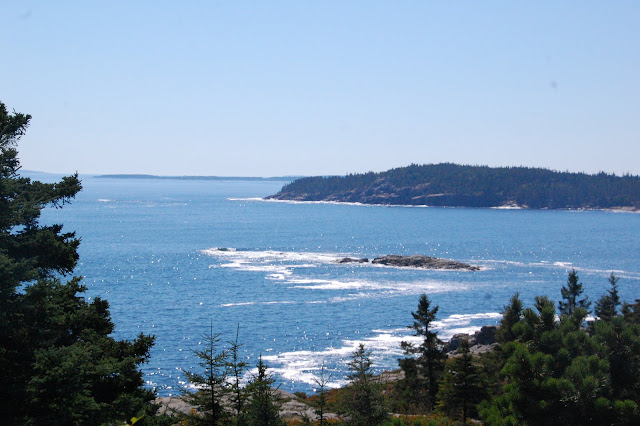 But what a view. 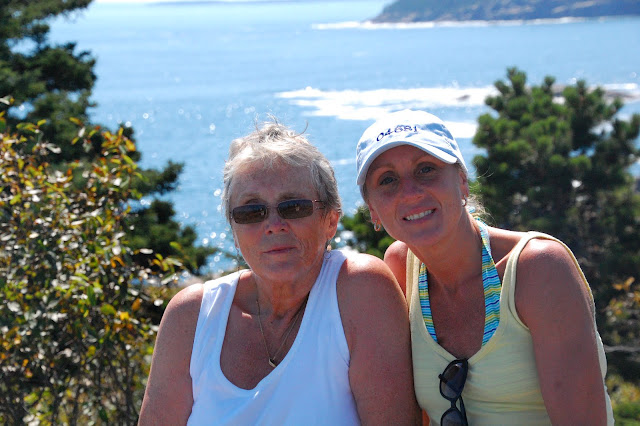 Met a couple from England, who were kind enough to take our picture.  I think he coveted my lens.
I'm sure he did. 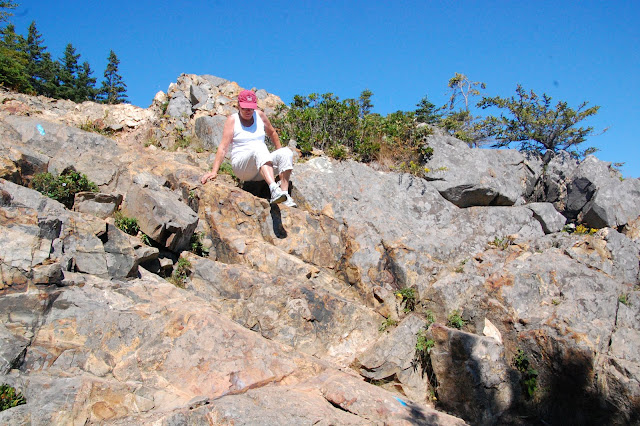 Ah, yes, the trip down.  Visions of smacking my head on that rock several weeks ago kept me steady.
And because my knee does not bend as much as it should/could, I had to make a concerted effort to lead with it every step.
To lead with my good knee, and have my bad knee behind me and unable to make the bend.........well, let's just say that is an attention getter. 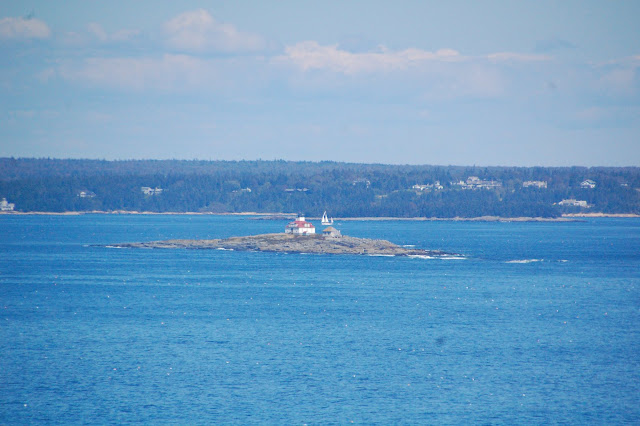 I could have stayed up here all day. 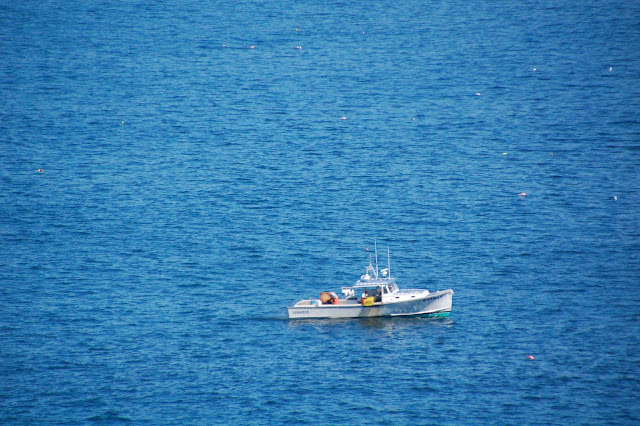 And it was good exercise.  Huff.  Puff.
It made the 27 years between me and my daughter seem like 100, if the truth be told. 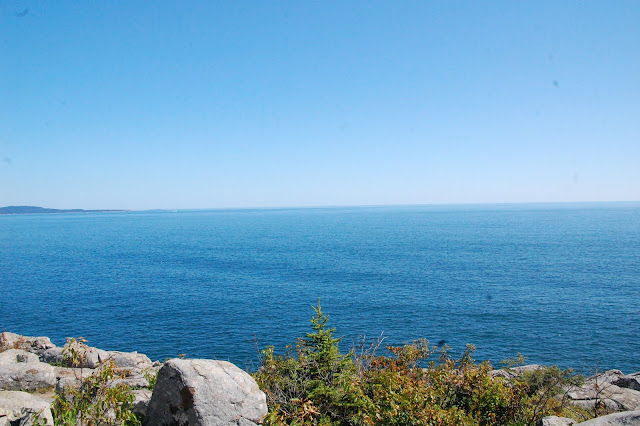 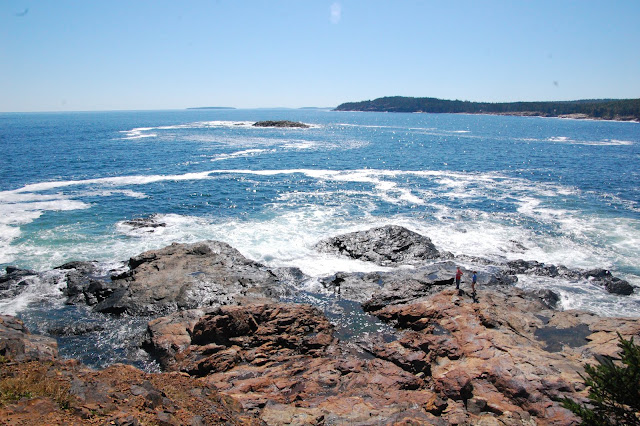 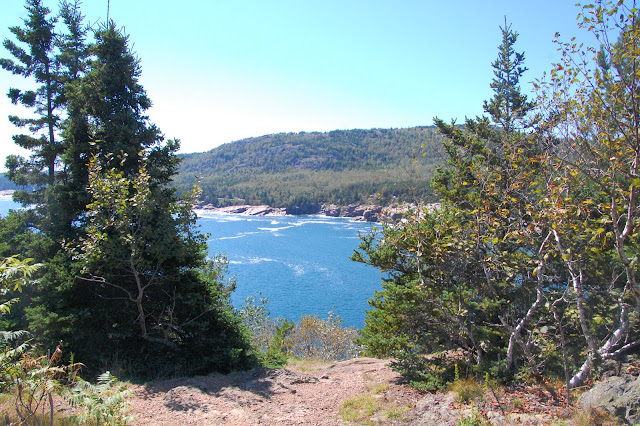 Finally coming around the other side,  I am anticipating the trip down those rocks that were pretty tough in the beginning.
Praying.  DO NOT FALL.
(you dope) 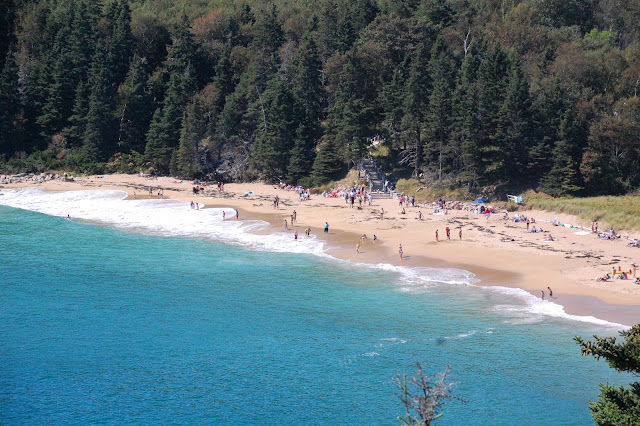 My daughter had the camera at this point.......since I was concentrating so hard on staying upright, I thought it a wise idea.   Which is why you see pictures of me coming down the mountain.
Oh, you aren't seeing all of them......she was having a good time with that camera....documenting my descent.
But I am the BOSS of that camera, and what's in it. And some of them were just plain embarrassing. 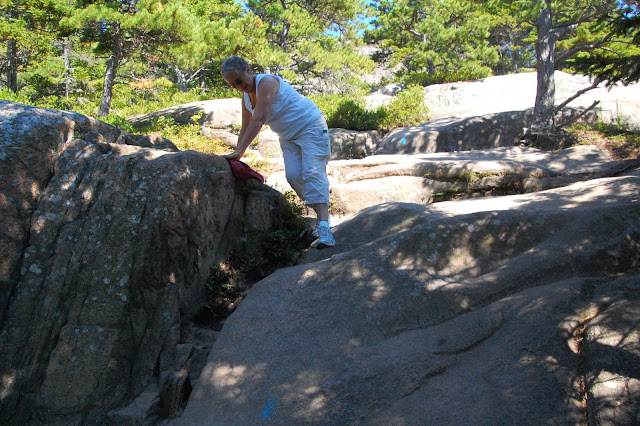 It doesn't seem that long ago, that I was jumping down off rocks like this,  totally comfortable with it.
When did that change??? 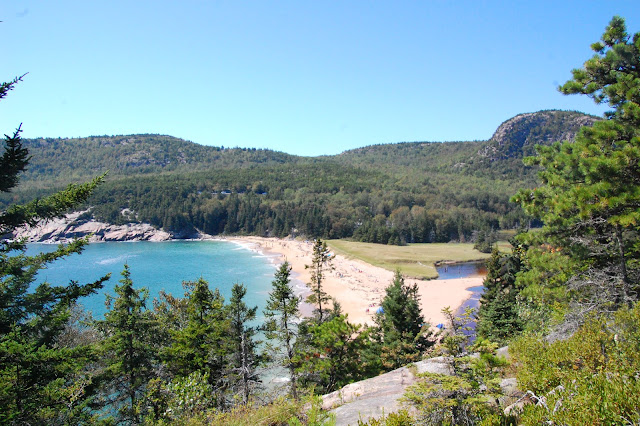 Ah, the end is in sight, and the feeling of accomplishment makes the pain in my knee(S) so worth it.

When we got back, my other two daughters hiked to the top........and with my zoom lens, I took a picture of one of them posing for the other. 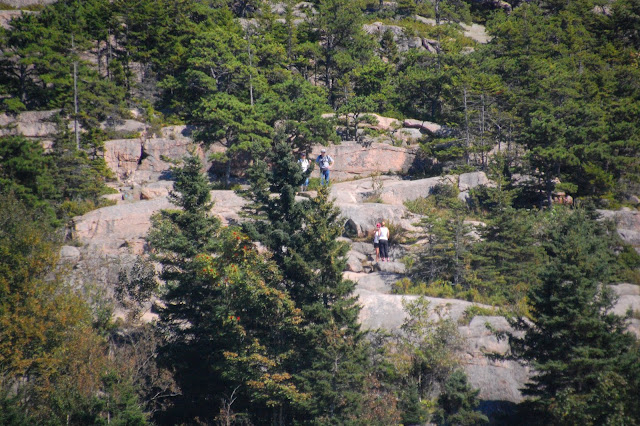 It was incredible, and I am glad I did it, but I guess I am happier now with my decision to give up my dream of doing the Adirondack High Peaks.
There are other fish to fry.

We just HAVE to meet someday! I saw some folks our age climbing the Adirondaks...I want to be a 46er, too. (Or maybe climb just a few of them...that would be OK, too) Before I die, I want to get over my fear of heights. There is just too much good stuff up there to see! I can't wait to go back to Acadia! Have you been to Lubec? We were there, too...and I want to go back!

Oh I am so pining for Acadia and those pictures!! sigh...Hope your knee is recovering as well as husband!

I had no idea that Maine waters could be that aqua color...until you started sharing your Maine pictures. Just beautiful!

From one bum-knee-er to another, kudos to you for making that climb/descent!

I suspect the gorgeous pictures have more to do with the photographer than the lens, but could you tell us what kind of new lens you have - so I can covet one too?!

Those pictures are absolutely gorgeous. Love the angle you shot them from, you have inspired me to try to capture more of this place. (Personally, I think some of those rocks on that trail are still growing.) ~Lili

Wow! What a beautiful place to hike and spend the day. The water colors are incredible!

Wonderful photos!!!!! No wonder you are loving that lens!
Such blue water!!

Oh I LOVE sand beach and the Great Head hike. I knew right away from your beautiful pictures where you were without even reading! What a great trip.