Ah, Father's Day.  When my Dad was alive, it was always a challenge to get him anything that he
would actually use.  He didn't play golf.  He didn't read.  His wardrobe consisted of gray pants, and a white tee shirt for as long as he lived.  Except when he got older, then he would turn the heat up to about 88, and lay in his recliner in his blue jockey shorts, watching Jerry Springer.  I think it was his version of lounging at the beach, with entertainment.
My father was one of a kind, there is no debate about it.
Our relationship was mostly rocky, with him trying to tell me what to do, and me doing what I wanted to do anyway.  This went on pretty much my whole life.   He never "got" that I was grown up,  making my own decisions.
He didn't have any tolerance for nonsense, or drama.
He worked, every day, all day.
I know, you're shocked.
I was his only child, and he did the best he could with the fact that I was a 'girl'.  He called me Tom.
And he dragged me around everywhere with him, and surprise, surprise, I worked.
He could do anything.  In my eyes.  He was strong, and he would live forever.  And I wouldn't miss him when he was gone.  Oh, no.  I wouldn't. Said it more than once when we were feuding with each other.

But in the end, he wasn't that strong, and he didn't live forever, and oh Lord, I do miss him, terribly.
And right before he left for new horizons, he told me that I was a "good daughter".  I had waited my whole life for him to say that.
Happy Father's Day, Dad, wherever you are.

But today, I am taking my mother to the Salvation Army church service.  She hasn't gone since she broke her shoulder, so I have had a reprieve, at her expense.
But today, I offered.  I can't do anything for my father today, so I will do it for her.
Who knows, they may convert me.
Unlikely, I know.
DH wants to know why I just can't take the day off, or the morning even, and just sit.  Read, he says.  Watch TV.  (I shudder here)
While waiting to take my mother to church, I scrub bathroom including walls and window and shade, and anything else in my way.

Miss Puss says: (because Sydney has nothing to add) 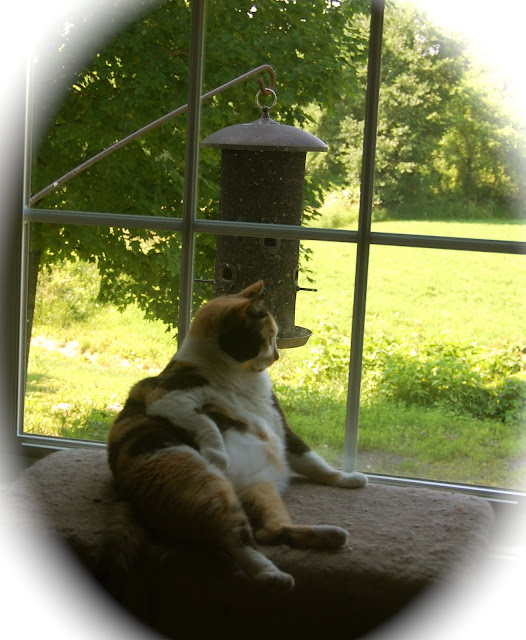 oh, you are a good daughter. I know your mom will appreciate it.

Dear Tom,
When you come to visit me, I'll let you clean and I'll watch tv.

I'm kidding. I'd read a book instead.

You are a good daughter. And now I'm not kidding.

What a loving tribute to your father ... and what a good daughter you are to your mother!

And doesn't Miss Puss just have the perfect place to wile away the hours on this fine Father's Day.

I love hearing about your Dad. Isn't it funny what we consider their best qualities now????

My son traveled past the shop and saw all the yellow loopers hanging out to dry. What a sight to see, and after visiting your shop a few months back he knew what they were! Deb from Cobleskill.

Nothing wrong with just the way you are.

Well.. I'm not concerned until I see you wearing only grey pants and white t-shirts :-)

Great Post, Hilary.. I love your honest take on life and family.