Well, first of all, let me say that it is not YOU ALL that are crazy.
It's me.
I apologize.  I thought I HAD told you that Next and Enough found a home......what I thought would be their forever home.
You know that they showed up pretty wild, and L and I financed their vet bill, got them neutered.
They both took off, taking offense to their new status, apparently, but Next came back after a month.
He got very friendly, disgustingly so, quite soon.
Then a couple of months later Enough came back, and he took longer to warm up, but when he did, he was over the top.
I worried about them, being outdoor cats.  True, they have a place in the barn, sheltered.  They don't seem to venture out the front of the house towards the road at all.  But still, I wanted them to be able to curl up by a warm fire in the winter, and decided that SIX cats inside was overkill.
So when my best customer, and neighbor, said that her old cat had died, and she was looking for another, and then she said she wanted both of them.....well, I thought it was just about perfect.
She is a mile and a half from the studio, and she said she would keep them in for a while, and then they would be inside/outside cats.
That was on the 3rd.  What I didn't know was that after a week, she decided she could safely let them out.
Next left immediately, bound for HOME.  His forever home, the one he decided was his.   I just didn't realize.
Enough hung around for a bit, but she hasn't seen him in two days.
She stopped at the studio today, and I am not sure who feels worse, or more guilty.
Next saw her, and ran for my legs.
Silly rabbit.
I get it now. 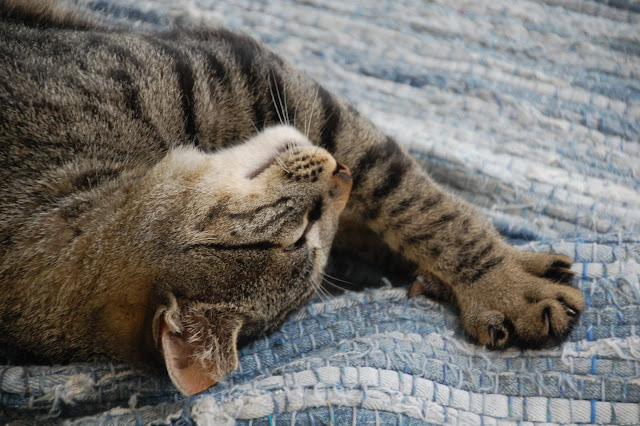 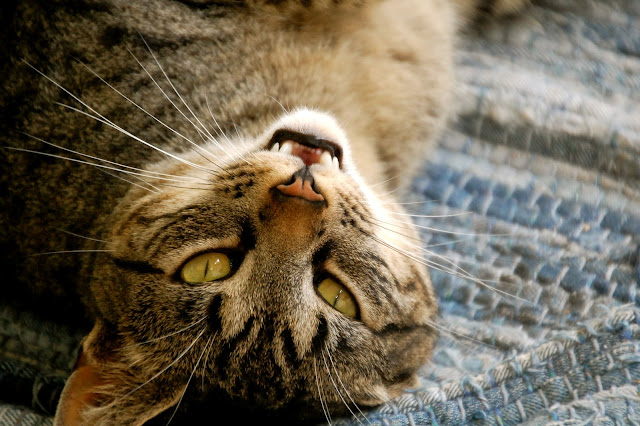 I rode around the back roads in either direction, since I have no idea which way Enough is headed.
Then back at the studio, Next and I went out into the field along the hedge row, with me yelling and Next meowing.
No Enough.
So now we wait, and hope he get his dopey self back here.
I promise, I won't make him leave again.
I feel so stupid.


It was too hot today to do much....but I started a type of rug that has been brewing inside my head.
Not sure what to call it.
It's a bit of this, and a bit of that.
Which to me  is the best kind. 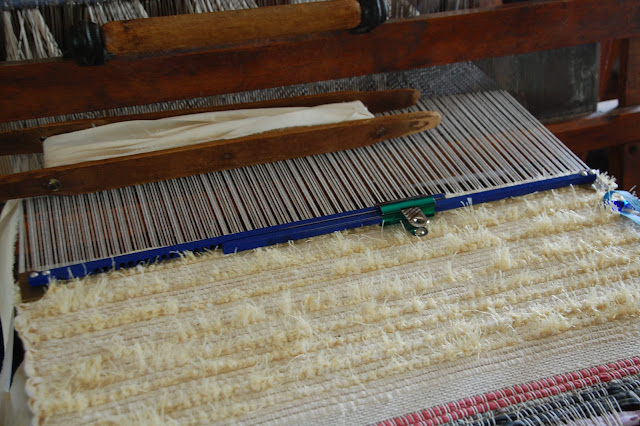 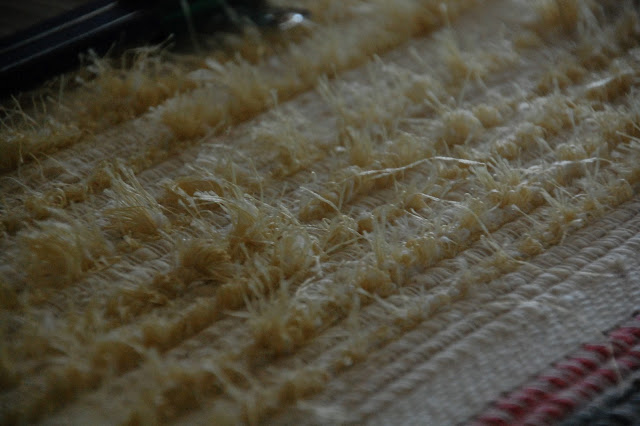 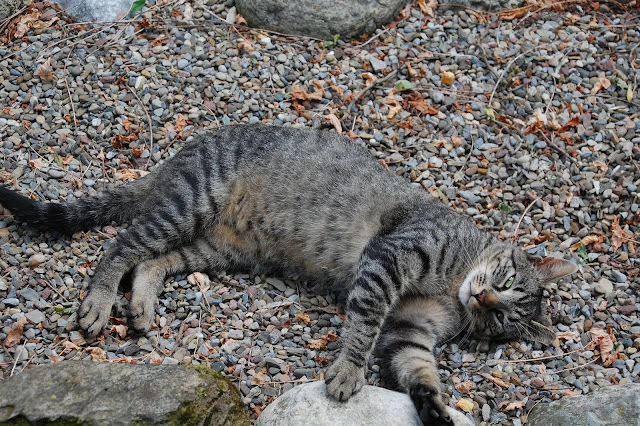 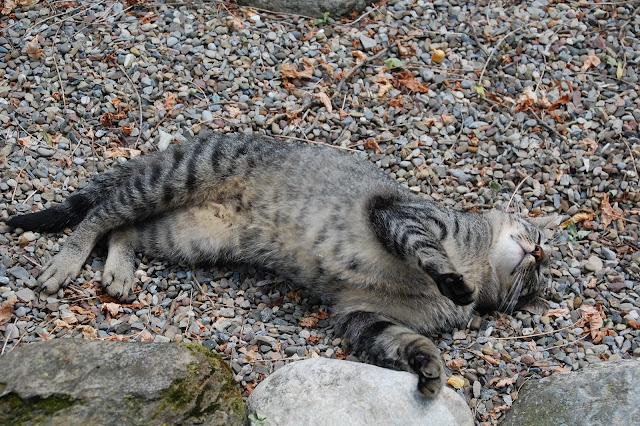 Wait, wait, here's my BEST side. 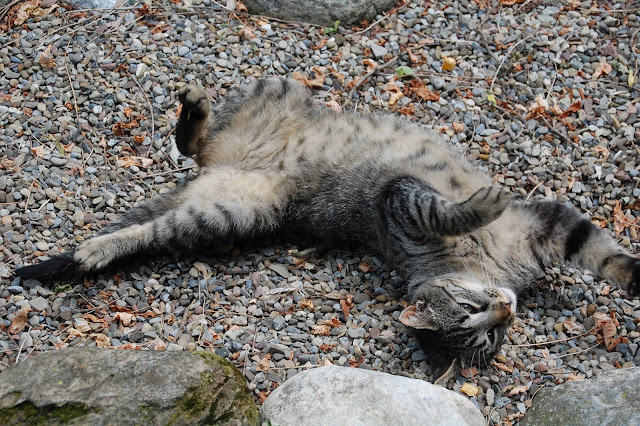 He's such a beautiful boy.. and all yours.

Are there shelters you can try in case Enough shows up there?

I can't tell you how relieved I am to know that YOU are crazy and I am not:-) LOL!
He is a gorgeous kitty and looks like he's right where he belongs. I bet Enough will be along very soon.

He knows where he belongs. He chose YOU as his human and you really don't have much say about it, do you now? He's beautiful, too...

I thought I had missed something reading the post about Next and Enough. That Next sure is a lover. And neither of you should feel guilty......Enough just may show up soon, or maybe he's found a new home......

Next looks so happy and relieved to be home with his Mama. Inside or out he will stay forever now. I am worrying about Enough. I hope he is alright.

He's so much like Sierra. Love the wild tabby look. I would call the closest shelter just to have them have a record of him if someone brings him in. If he's friendly and hungry he will go to someone who just may not know what to do but load him off to the pound. I've also gone to neighbours and given a description of a missing cat so they can at least let you know if they have seen him close by. These cats are enough to drive ya nuts, right. Good luck and hope he shows up.

I'm glad the happy boy is home and hope that Enough comes home soon, too. You are needed. ;)

So busy thinking about the cats, I overlooked the rug. Smashing, just smashing!
Trish

Sometimes you just get chosen to be part of the family and it appears you are well suited for each other. I am sure Syd will adjust to sharing her box once in a while.

Love the rug..It is fun!

I am thinking that Enough is punishing you ..

Sounds to me like these guys know exactly where they're supposed to be, where they're most comfortable. How nice for everybody, all around.

I love their names. Next and Enough.

I had a cat disappear for a MONTH and return home. SO... give it time.

And guess what STUPID ME did today... I went out with my barstool to take a picture of the baby birds not yet out of the nest over the kitchen slider. THIS time.. they were so frightened they FLEW OUT!!!!... four of the five were apparently OK with that because they flew into the field. The fifth needed a few more days and flopped to the floor. SIGH!!!... I picked him up and put him back in the nest... and now his mother comes to the nest but won't feed him, as trying to make him fly away. He's not ready... and the others probably would have waiting longer too if I hadn't scared them. UGH!!!!!!!!!!!