The other night, I was amusing myself on the internet.  I decided to find the video of my mother arriving in this country.
I knew it was out there, because I've seen it before, and it occurred to me that I should find it, and try to procure it to keep.
My mother, for those of you who don't know, was a war bride.  She was on the first boat load of war brides to arrive in the USA from England, in February 1946.
The video shows several of the young women waving to the camera, and smiling, as they boarded the ship on their way to their new lives.  My 21 year old mother is front and center.

They  were struck by a vicious storm on the Atlantic, and most of the passengers suffered from violent seasickness.

While I was searching for the video, I came across a newsreel, about the brides when they landed in New York.  So, interested, I watched it.
I found out later, talking to my mother, that the husbands were ordered NOT to meet the Argentina at the pier, but rather to go to the lobby of some hotel, where they would be reunited with their wives.

As I watched the video, suddenly I was shocked to recognize my father walking towards the camera.
There was no doubt in my mind, that I was watching my 23 year old father, waiting to meet my mother. 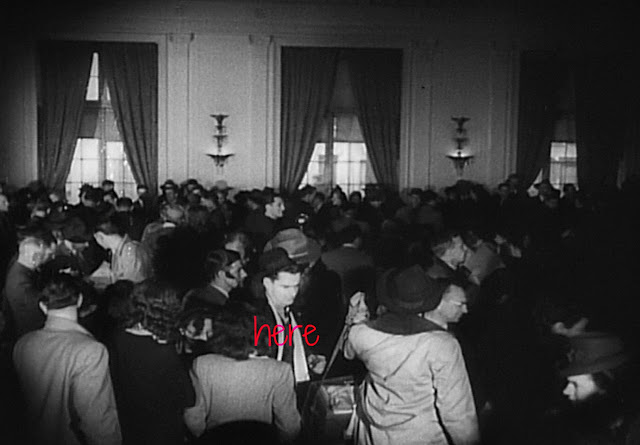 I have seen many pictures of my father in that coat, and that hat, taken in the first few years of my parents' marriage. 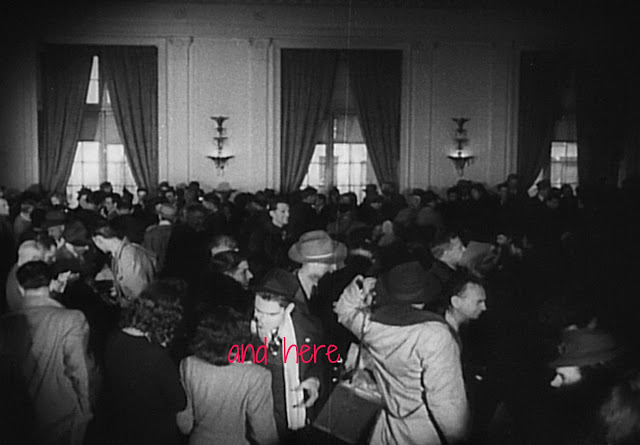 I showed the film to my mother.......and she knew immediately, that it was him.
As short as the film was, I could see that he was chewing gum.
And knowing my father, I know that it was Juicy Fruit.  No doubt in my mind.

My father has been gone for 7 years now.  Somehow, I just got him back, for an instant. 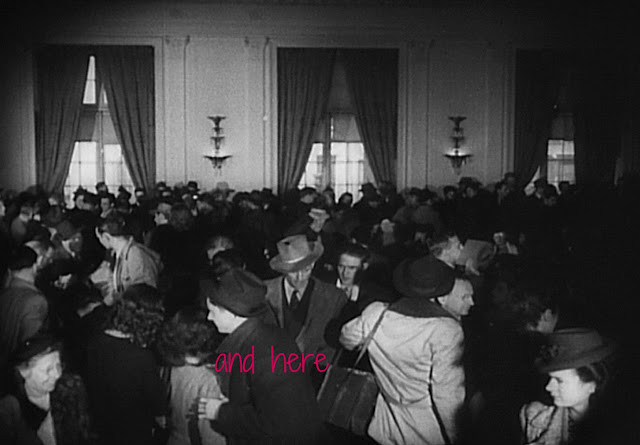 It is amazing how much love, and longing, you can feel in an instant.

Wow.. that must have just blown you away. What an incredible gift for you and for your mother. I can't begin to imagine how you feel. I'm so glad you found this. And shared.

That is an amazing story...such a sacred moment. Our lives are so precious. Candace

That is just the sweetest story! Wow! It blew me away, I can only imagine how you and your Mom feel.

omg, Hilary, this is a TREASURE...the lump in your throat must have been huge...your father, waiting to meet your mother? and you, but a *twinkle* ???

All of this: PRICELESS.

Love. And longing. That's all there is really.

That would have felt like a blow to the body to have such a moment like that come at you out off the screen.

A most precious gift.
No doubt there were tears...

Thank you for sharing with us all..
Susan

Oh, how wonderful! ... and oh, how I wish it was me... seeing my father just once again..I'm so happy for you to have experienced that. Still crying here.. :) Thanks for sharing, and yes, it's all about love.

What a priceless gift you found! How I would adore to have footage of my dad. I have photos, but a movie? WOW.

What a find! It's a treasure you never knew was out there.

How wonderful!! Gave me super case of goosebumps, you did. This short little newsreel is a real family treasure.

That is just incredible. What a find for you. As they would say in England, you must have been gobsmacked.

What an amazing story!

I got "goosies" (goosebumps) reading this. Beautiful!

congrats on POTW lady
this is a lovely touching post

hilary, this was wonderful! congratulations on your POTW! well-deserved. thanks for sharing this.

This an eerie and beautiful story. Congrats on your well-deserved potw!

very nice, I bet you watched this a few times

That was really lovely and surreal...all of you brought together again, by glimpses of your family's beginning. Very touching.

I read this the other day, after Hilary posted about your monkeys. It was touching then and equally touching today. What a treasure, and well-deserving of a POTW!

What a heartwarming story! Wow.

Visiting from The Smitten Image. :)

Oh, this one made my hand go to my heart.

This touched me so that I forgot why I came here...congrats on your well-deserved POTW!