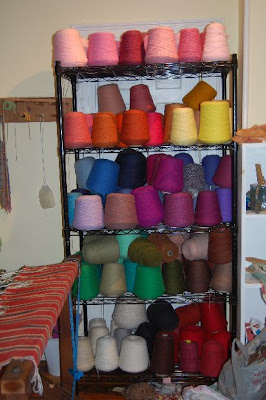 I am finally feeling more like myself. I gave in and went to the doctor on Saturday, and had someone tell me what I already pretty much knew: You have a sinus infection.
And I have been on an antibiotic since, and I am feeling better every day.
Today is the first day that I really had some energy.
So I moved all these cones of wool to this shelving unit.
Basically, I am trying to get a little organized, and ready for the Christmas in the Country tour, which is the first weekend in December. 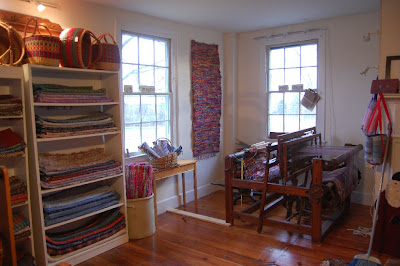 I have struggled with the balance between retail space, and working space. The bottom line is that since most of my business in online based, retail space is not my highest priority. I get some walk in customers, but it is rare, except for this weekend in December, and then I am mobbed.

The old living room, which I call the 'front room' or the 'shop', was originally the part of the house that I designated to retail. But then I continued to acquire more looms, and now this is working space, as well as shop space.
I have decided to maintain Crazy as a Loom as a working weaving studio. And even though I have some nice retail displays, having an actual store isn't the most important thing to me.
Of course, keeping the studio clean and generally picked up, so that it looks nice if people do come in, well, that is a challenge.
I have tried throwing that "creative muse" thing out there, but you can only take that so far.

I moved some stuff around today, put the big Weaver's Friend loom over in the corner between two windows. It seemed to be less of a presence in the room over there. And it is a really nice place to weave, with all that light. 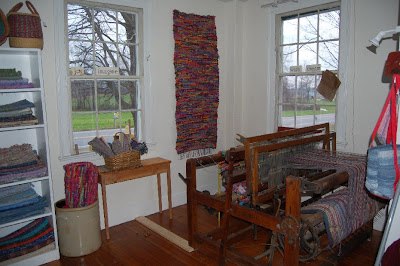 See the boards on the floor behind the loom? The action of beating the weft in makes the loom walk towards me, and next thing you know I am trapped in the corner. These boards will prevent that, and I won't have to be pushing it away from me every five minutes.
My DH would say,"that's OK, I don't need to know, I already know more than I wanted to."
You're not saying that, are you?? 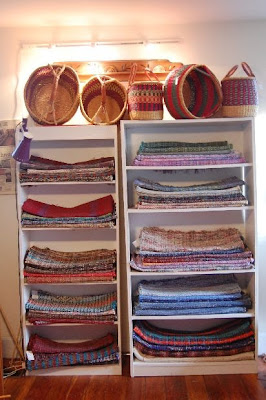 And these two shelves were in the corner where I moved the loom, so I had to find a place for them. And it is good sometimes to get behind things and clean on occasion. I found some serious dust bunnies behind them.
I am so looking forward to having a better week. It is such a relief to feel better.
So it was a quiet day.
Oh, yeah, one big excitement.....I need a new roof. They will be pounding over my head tomorrow, and I will be hoping for some orders to pay for it.

I'm grateful anyway. I know that sounds odd, but I am.

This morning, I took my mother to get her hair done. When we were leaving, and she was gabbing and joking with the girls at the counter, one of them said to me, "she's something".....I said, "yeah, you ought to live with her"...........and another girl piped up and said...."try living without her"..................my mother was still gabbing, and heard nothing.
But as I was walking her to the car, something got in my eye. Must have been some dust or maybe the wind.
Can you believe that??
Posted by Hilary at 6:14 PM

Well, I'm not saying that I already know more than I need to know. And watch that dust getting in your eyes.
Really glad you're feeling better, Hilary.

That's a wise girl who piped up. Glad that you're on the mend. :)

Love the room , so inviting, and the creeping loom solution is great! My grandma was a pip to live with, too, but we still miss her and it has been 25 years.........

You just sent some dust my way, that made me remember my mom and how she never met a stranger ... that girl was right ... not so easy

and I love Ottmar Liebert ...he was playing when I got here

Glad you are feeling better... sinus infections REALLY are the pits. Used to get them a lot when I was a smoker, but I quit that habit in '94. What a difference no smoke makes!

so very true, I have never heard that saying.

Sure glad you're feeling better!!

After trying everything else I do the same thing from my loom from walking toward me.

I glad you feel better, and it's true enjoy the time you have with her, even though it maybe tiring at times, I know I have grandparents that drive my mom nuts, but she would have it any other way. {{hugs}} I love the pictures of your studio, gives me hope for mine someday.