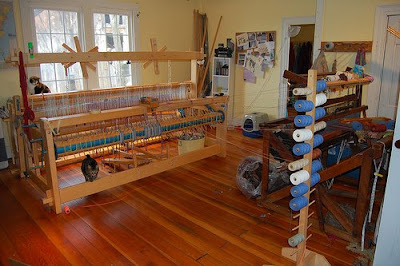 This is the beginning of a custom rug. the warp on the spool rack, waiting to be wound on the 7 ft Toika. The order is a 10x12 blue jean rug. It will be made in two 5 ft wide sections, each 12 ft long.
The warp is interesting, mostly blue, but with some cream, some variegated beige, and a touch of rust. 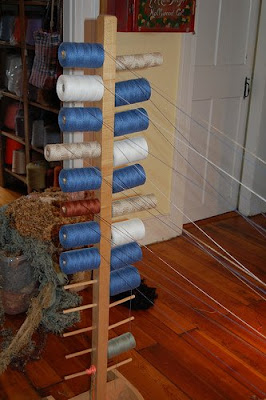 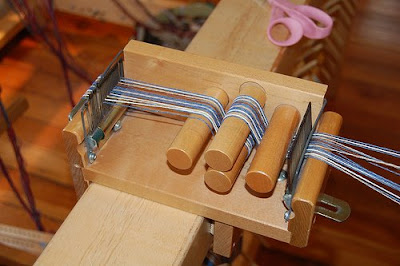 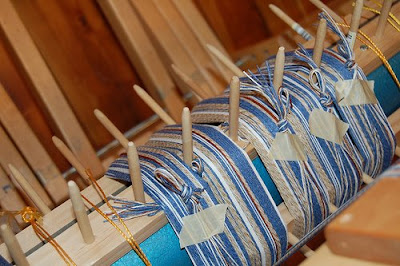 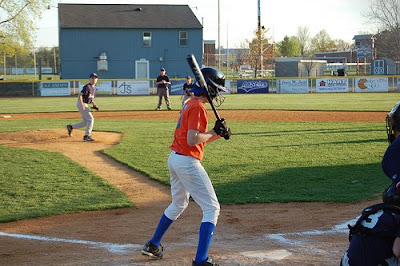 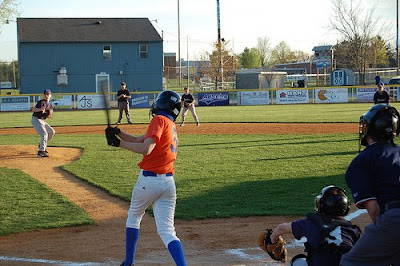 I personally have marked each and every loom I own with an arrow on the side. I am often asked why.
The truth is that some of the warp beams are wound towards the loom, and some of them are wound away from the loom. Winding the warp on backwards is a disaster. You usually only do it once. I did it on the first Union 36 I bought, and as soon as I realized what I had done, I talked my husband into turning the back beam around.
I then proceeded to put arrows on my looms near the crank, and on every other loom that I have acquired.
Here is the tension box, doing its job.
I have intended to buy a counter, so that every section is exactly the same, but I continue to rely on my counting skills, and every time I finish a warp, I am amazed at how really bad I am at it.
I put a little masking tape on each section when I'm done with it.
The warp is on, all 5ft of it, and now all I have to do is tie it on to the old warp that was on the loom, carefully pull the knots through, and tie it onto the front beam.
Then we're ready to weave blue jeans.
Got a chance to see my grandson play baseball last night. He is SO serious. And hard on himself, a family trait I'm afraid.

He is only 11, but very tall, like his Dad.
While we were watching, he had a hit.
Which his attentive Mimi caught with her new camera.
It was a chance for us to connect, spend a little time together. I have the best family.......I can't imagine my life without them.

We used to live two hours apart, and that was difficult. When they came to visit for the day, they had to factor in 4 hours of driving. With little kids in tow, that is tough. So five years ago, I moved an hour closer. We still moan and groan about the distance, but then we remember what it USED to be like, and we are grateful. I don't know how people manage when their kids live across the country. I would be flying back and forth all the time, and I would rather have a root canal than fly in an airplane. I would rather sprout wings and fly solo. 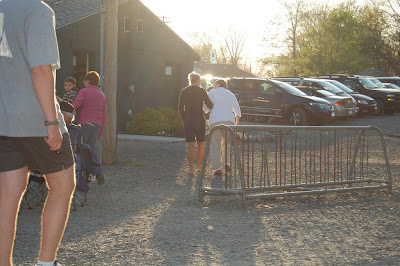 I love this picture. It isn't a great photograph, but I love the hazy look of the late day sun, and the way my mother and my daughter are looking at each other, in conversation, on their way to the rest rooms.
It says a lot to me.
My mother has been very close to all three of my daughters since they were born. Now at 84, she is getting to spend time with their children, and loving every minute of it.
So that is what I have been up to. A relief after all that dyeing.

Just another day in paradise.
Posted by Hilary at 5:33 PM

I love to hear about your weaving.
Loved your photos.
Don't know that I've ever seen a Loom before.

Your weaving looks fascinating, yet is pretty much a foreign language to me. Family though, I understand fully. Yours sounds wonderful. :)

Always good to see photos of a Toika!!!

I, too, was once totally clueless about weaving. In fact, I was so intimidated, that I put off learning for a lot of years, even though I desperately wanted to do it. Now I wonder why, because it seems so simple. When I am teaching basic weaving in the studio, I tell students that this is NOT rocket science, it is simply keeping (warp) threads under tension, so you can pass (weft) threads through them. It is a step by step process to me, like a recipe. And when you are done, it didn't seem that hard at all.

I love your photos! Especially the kitties hiding here and there!

Funny - "just another day in paradise" is the phrase our POA attaches to the association name. It takes some getting used to seeing the high desert as paradise.

I look forward to Little League games after my retirement in six weeks - I only get to see them as video posted to Facebook. We're an hour away as well and I'm with you - "only" an hour away. Life is good.

I have idea how to wind a monster warp! I think I need to know more about a tension box.

What a wonderful life you have. Yep..getting older probably does help me more determined to do it right! I loved the photo's of your loom room. The family pictures are always priceless.

You have such a great looking place to do your craft. The floors are gorgeous... it must give you great pleasure to spend time there.

Sharon.....any time you want to talk about a tension box, just drop me a line.
Di....the floors are gorgeous, aren't they? when I bought the house, they were all old, crusty paint, and someone said I shouldn't touch them because I would ruin them...and now they are spectacular, and everyone who comes in, says so.....sometimes it is best to go with your gut.

Hilary, I can't find your email link. I would *love* to drop you a line about tension boxes. Help!

I don't know a thing about weaving but am so impressed and amamzed at what you do. Just beautiful.