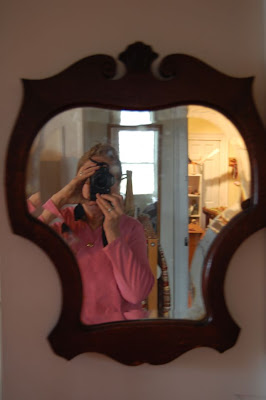 I love this mirror, and when I took the photo, I forgot that there was a mirror behind me, so you get a glimpse of the window in the room to the right, in front of me, and the room behind me. Having this new camera, I am like a kid with a new toy. 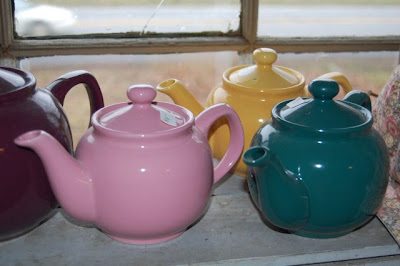 How about a cuppa tea????
Because my mother is from England, we make tea in the pot. With a tea cozy. And the water has to be boiling......really boiling.....before you pour it on the tea in the pot.
I tend to drink too much tea. But I guess I could do worse things. I could use too much salt.
:) 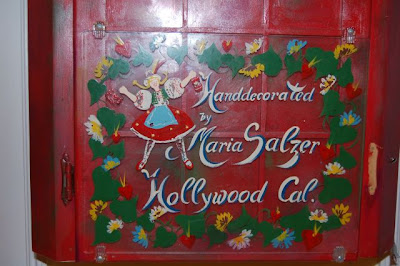 A few years ago, when my husband and I were in Maine for a little getaway, we were driving up the coast one afternoon, and we happened on this garage sale. The house was quite nice, and the sale was set up in the attached garage. We wandered through some very interesting stuff, and we exchanged horrified looks when we looked at some of the prices on things......$250, $500, etc.
Then I saw this little cupboard, and I was intrigued. I looked at the price a couple of times. I blinked. I thought it said $1500, then no, $150........but no, it said $15..........FIFTEEN DOLLARS.
I didn't quite get it. I picked it up, and took it to the door, opened my purse to pay for it, fulling expecting to be told that $15 was a mistake. But nope, it was the right price, and I loaded it in the car. I don't really know who Maria Salzer was, but I keep lots of pieces parts in this little cupboard, it is very useful, and I like it a lot. I like to think that Maria Salzer would approve.

Yesterday, I was weaving a rug that had to be 108" long. I was using a 60" tape measure, and I got distracted, and measured it wrong. It turned out to be about 30" too long.
So today, I took it apart, row by row.
I imagined I heard my late friend, Shirley Simms, chuckle and say, "Idiot work."
Shirley was a weaver I met online several years ago. We became good friends, and emailed often. Sometimes we talked on the phone. She was a wealth of information about weaving, selling rugs, cooking, and life, in general. I went to Kentucky, and met her, and later she came to Kingsbury, and stayed for a week. We did a lot of weaving, talking, and laughing. She encouraged me along the way. She told me once that I was a better weaver than she was, and I was very touched by that. She told me to call her Flossie, because that was what her very best friends called her.
She died last year of bone cancer. I still miss talking to her, and every now and then, for no particular reason, I feel her presence, and imagine she is watching me, smiling, staying connected in her own way. Or perhaps it is just in my mind, but whatever, I just say out loud, "Hey Flossie, what's up, girl? I miss talking to you."

Which brings me to something that has occurred to me of late. Old friends. Everyone has them. People who you knew once, were close to once, and then lost touch with over the years.
Is it just me as I get older, or is this a common occurrence? That suddenly you wish you could just see an old friend, maybe just over a cuppa coffee, or a drink. Just to chat for a few. How are you? Are you happy? Where have you been all this time? Every now and then, I remember someone I knew in high school, in college, my first job, and I want to find them, call them, say......hey, do you remember me, because I remember you. And I want to touch base with you one last time. Maybe it is getting older, and there is the thought that you might not get to ever lay eyes on those old friends, if in fact you don't do it soon. Maybe it is just that, fear that you don't have forever, after all.
Posted by Hilary at 6:38 PM

What a steal on the cupboard! ;)

You are so 'right on' about friends! I've been taking special time to spend with my friends too.....time is so prescious;)