I wish I could say that life had calmed down at my house.
But the very next night after my last post, my daughter and I spend half the night in the ER with my mother.
She is back in the hospital, and things seem under control once again.
But it seems to be indicative of more to come.

We are lucky to have a great hospital nearby. 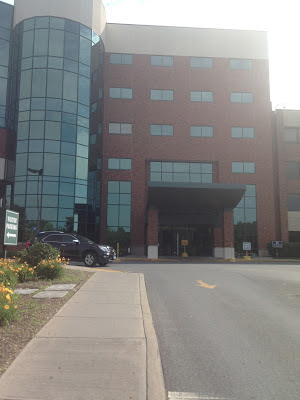 My two other daughters spent the morning with her, so I got to go to the studio for a while.

L and I had a finished rug on the Toika, but we had enough warp for another one.  We had the fabric all wound and ready, so the rug went quickly.

Here is the rug we wove on Monday. 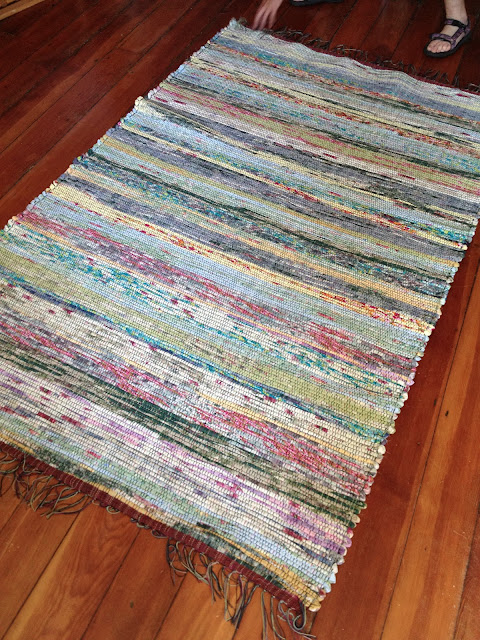 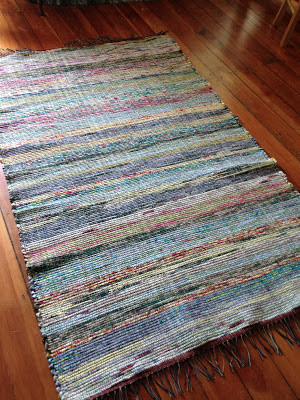 We had two fans blowing directly at us, but it was still hot. 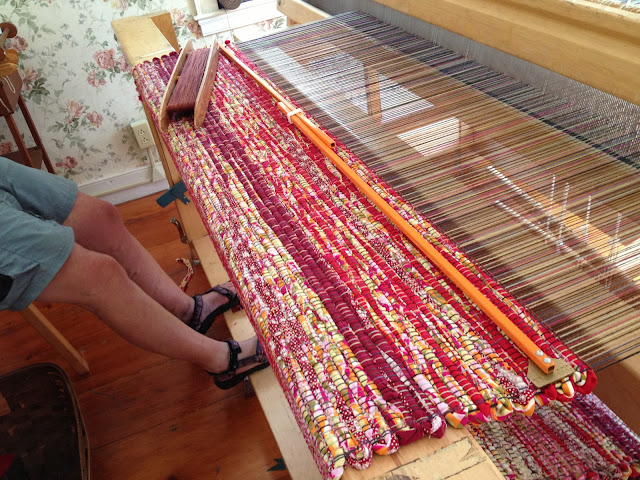 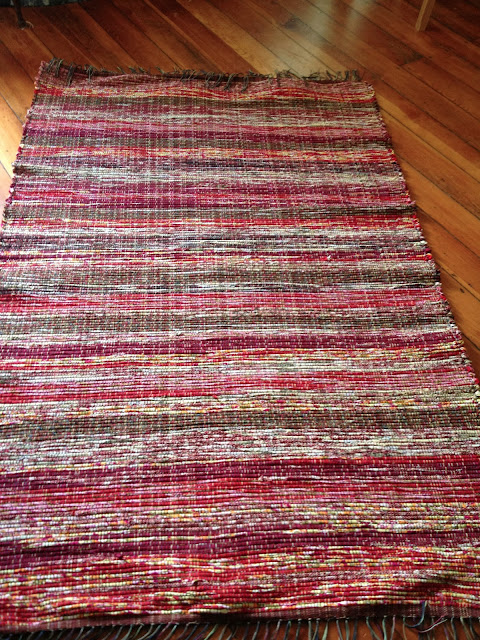 They are both 4'x6' approximately.
Which one do you like better? 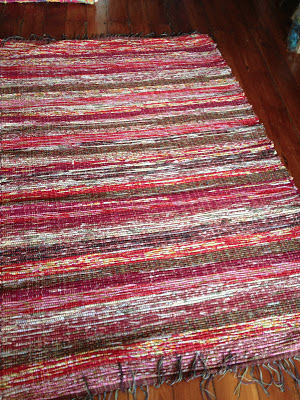 By noon time, we had wrapped it up.   It was really too hot, and I had responsibilities.

sorry about your mom. i like the red rug a lot. :)

I like the blue but the red sure is nice too. Sorry about the hospital stuff. Oy vey.

Sorry to hear about your mom. It is hard, I know. I like both rugs a lot, but am leaning toward the red which is unusual for me.

Sorry to hear about your mom. It is hard, I know. I like both rugs a lot, but am leaning toward the red which is unusual for me.

Also sorry about the double post...no idea how that happened.

Thinking of you and your mom, Hilary. Love the red one. Hugs

I like both rugs, but I never was one to be able to make up my mind.

Your poor mama. Glad the girls are there to help out and give you a much needed break.

I keep telling my hubby, "the heat is going to be unbearable compared to our beautiful days here in the Pacific Northwest." He keeps say, "it's for the grands!" Both rugs are just exquisite, but I think my eye is drawn to the red one. Keep cool, XOXO

I love the red. My mom had a couple of times in and out of the hospital until they finally figured out atrial fillibration and the correct dosage of meds to keep her pulse lower...so there is hope. Hopefully they can keep her until they figure out what is causing her problems.

Sorry about your Mom. Hope things calm down a bit soon for all of you.
I like both rugs!

So sorry your Mom is back in the hospital, it's tough on everyone spending so much time in a hospital with a loved one - so glad there are many of you to give others a break. Both rugs are great - good therapy break for you to get to the studio

So sorry to hear your Mom went back in to the ?ER. My Dad is still at the hospital since the third and I am now on an extended vacation waiting to hear when they will release him. I called my work and told them I had to do what I have to do and my Dad comes first. They understand.
I hope things get better for all of you out there. I'm hearing you with the heat. We finally just got to around ninety degrees.

I meant to say too, I like both the rugs but the re is really pleasing my eyes!

I love them both equally, truth be told. Great color pallete, but then, you never really do screw that up :-)

i think it is pretty...i like the colors...
sorry on your mom. its no fun at all seeing a parent in the hospital...

love them both, but i am partial to the red

i am sorry to hear your mom is having these recurring issues, its not easy for any of you .. hugs!

These are both beautiful and it would be hard to choose. The blue one would be perfect in my bedroom but I also love the brightness of the pink!

I am sorry about your mom.

I hope all will b are well.

Your rugs are beautiful.

So sorry to hear that your mom is doing poorly. I hope she is able to get more comfortable soon. That's so hard on everyone.

The colours of the first one appeals to my senses. I'm not too much of a red person.

Sorry about your mom. That road is filled with work, reward and surprises. hang in there. xoxo