But I love to watch a daughter find hers. 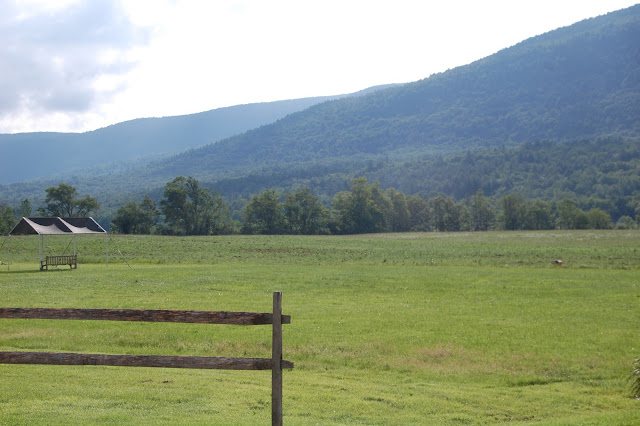 The weather held for the falconry lesson that was a birthday gift from her fam. 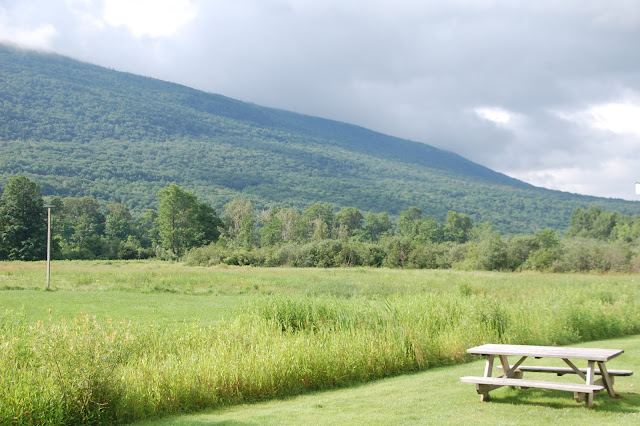 The British School of Falconry is in Manchester, Vermont, about an hour and 15 minute drive for us. 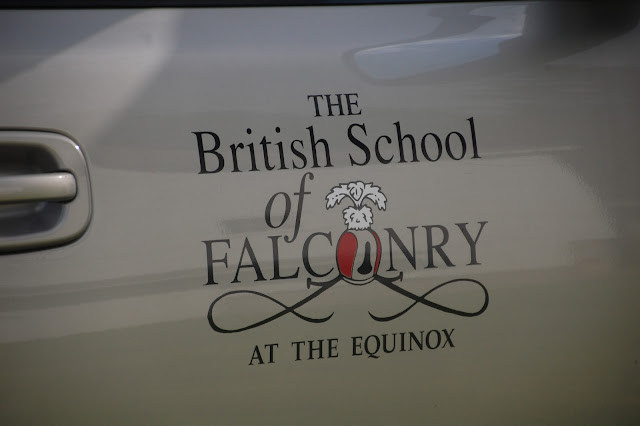 It was incredibly educational.  As the one guest allowed, I got to listen, and of course, I was the photographer (using that term loosely)
My daughter loves birds. We affectionately call her the "bird lady".
When that hawk first lighted on her glove, her face was radiant. 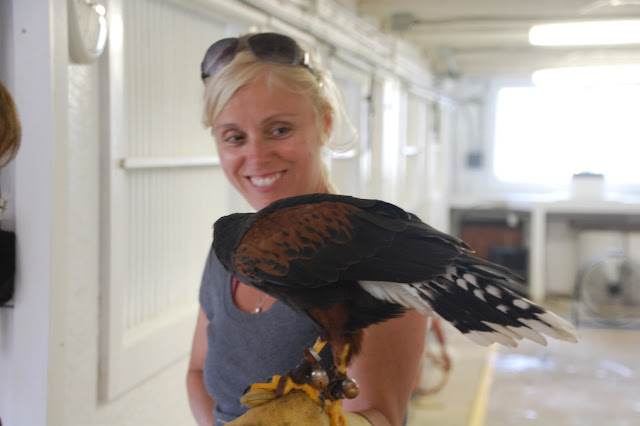 And it stayed that way for the two hours we were there.

This is Sprint.   They use Harris hawks, as they are more social, and will allow strangers to handle them.  They are found in the southwest, like Arizona. 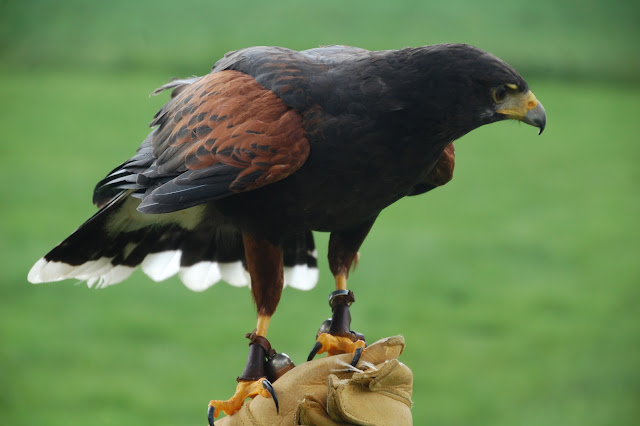 As opposed to the red tailed hawk that is common in this area.  They are much more a one person kind of bird. 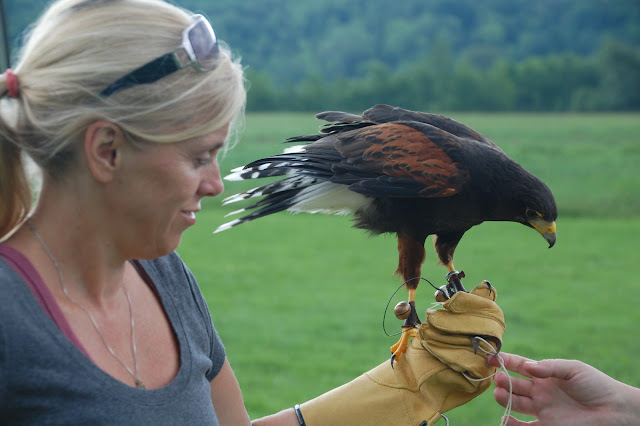 I was amazed at all of it.
She took to it like she'd been doing it all her life. 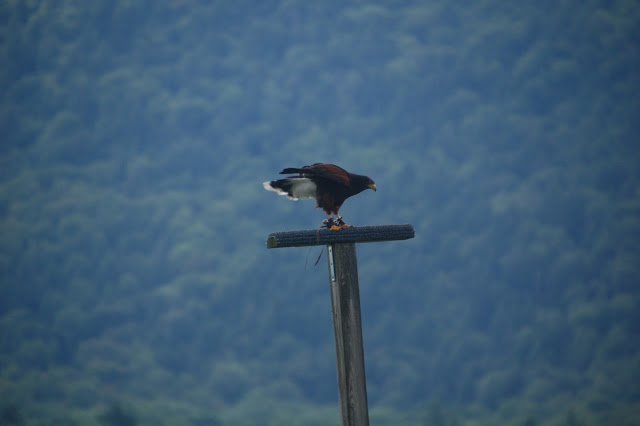 I lost count of how many times she had hawks landing on her hand. 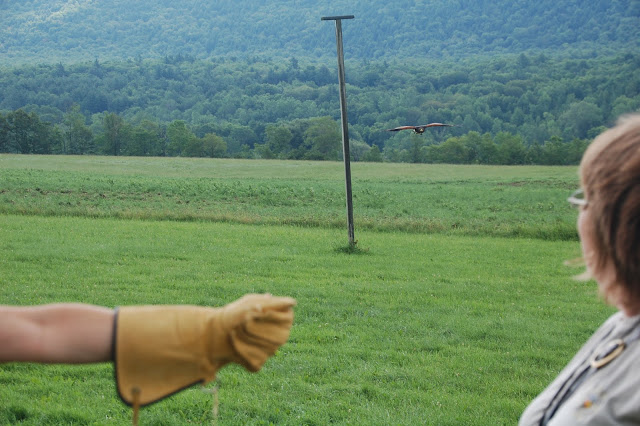 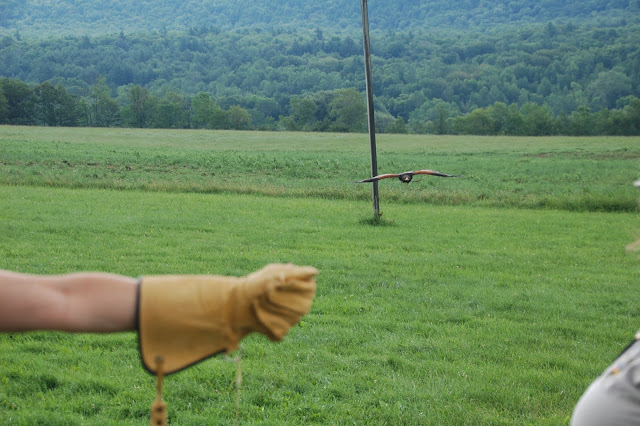 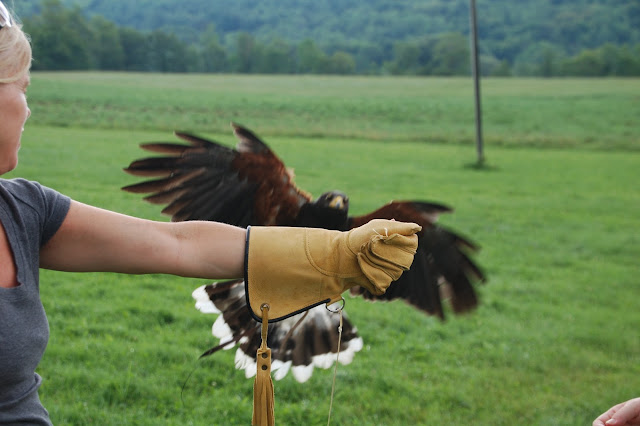 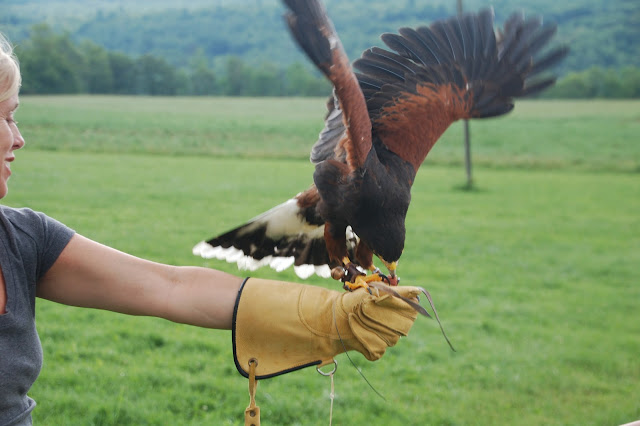 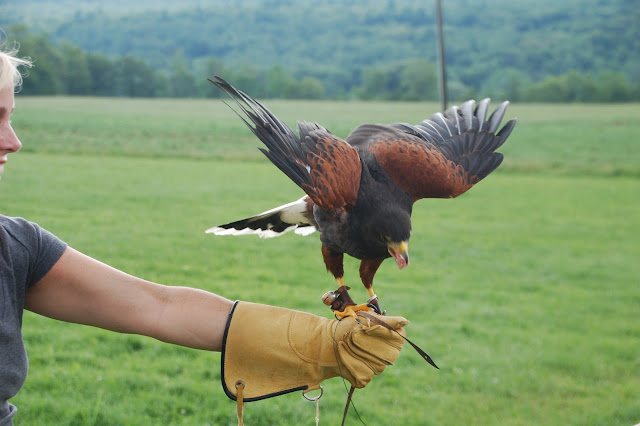 After the lesson, we went on the "hawk walk".
Dawn, the instructor, is amazing.  She knows falconry, and teaches it with such enthusiasm. 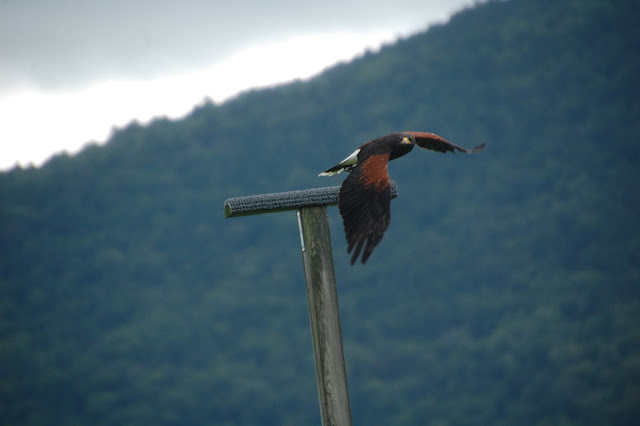 It was interesting, listening to one woman talking about her passion, and the student eagerly taking it all it,  two "bird ladies" chatting it up. 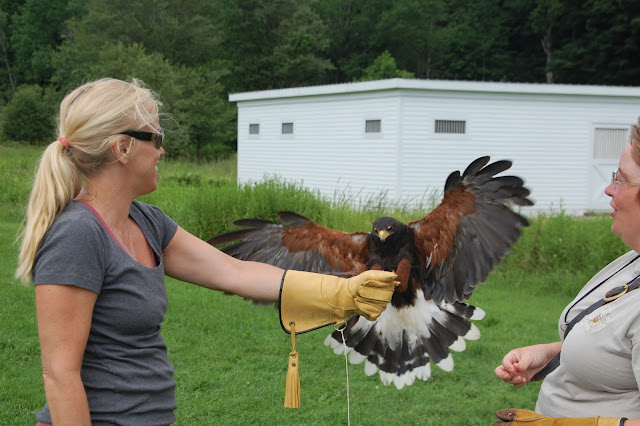 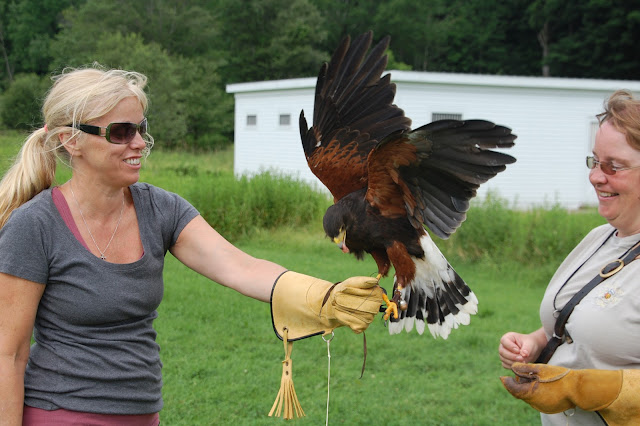 All you have to do is look at their smiles.  Says it all. 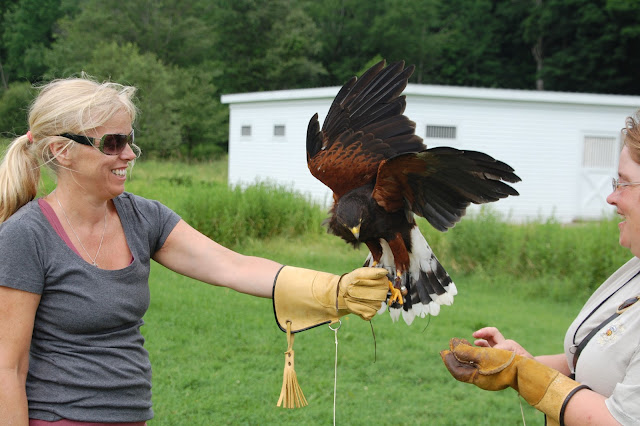 The hawk walk was amazing.
The two hawks, one male and one female, followed us through the woods, from tree to tree, landing every couple of minutes. 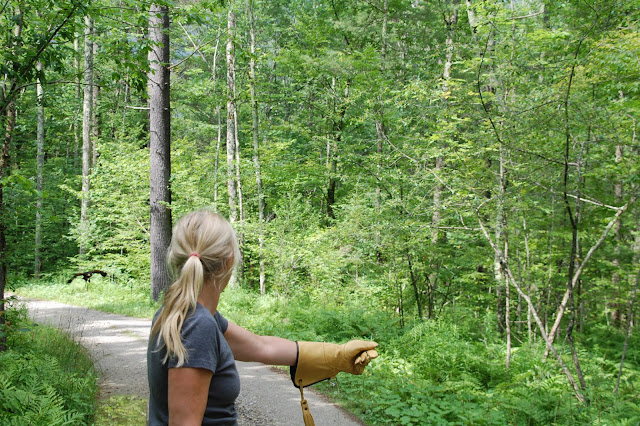 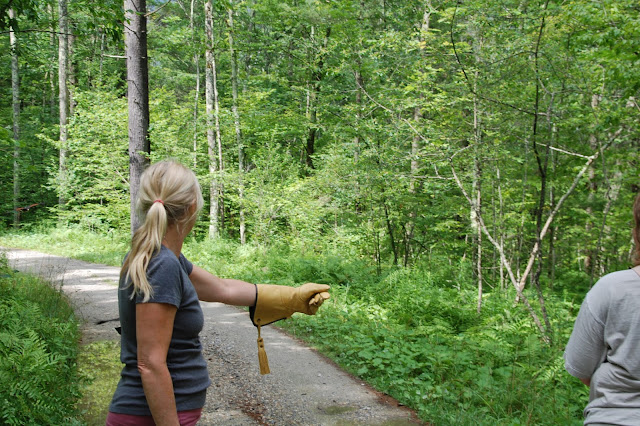 They actually live much longer in captivity.
It's a tough world for a hawk out there.
Most of them don't make the first year. 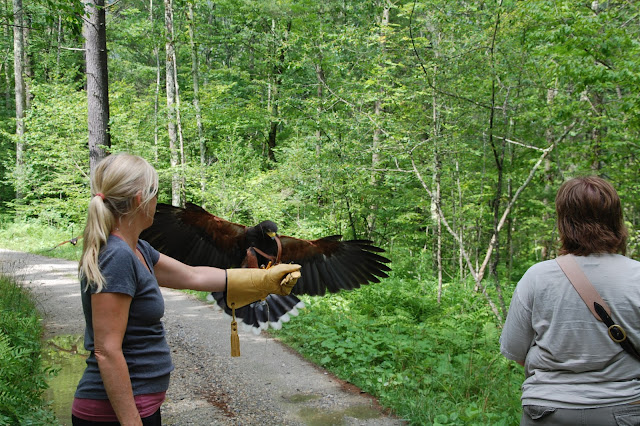 I also didn't know that to have a hawk, one must go through some incredible steps.  There is a lot of study and two years of following a mentor, and being tested.
And then trapping your own hawk, a red tailed hawk. 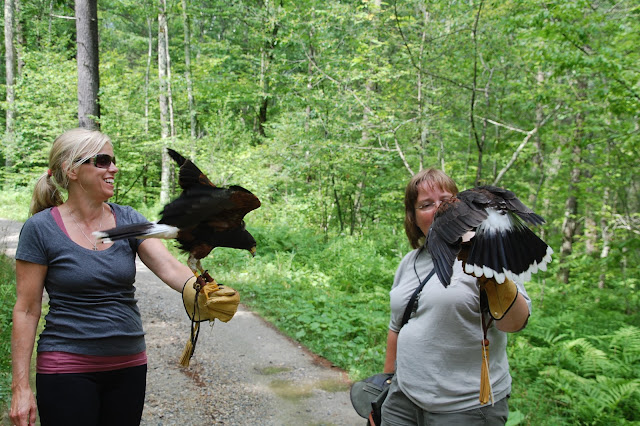 And even then, the state will come to inspect his housing.
This is very well regulated to protect the birds. 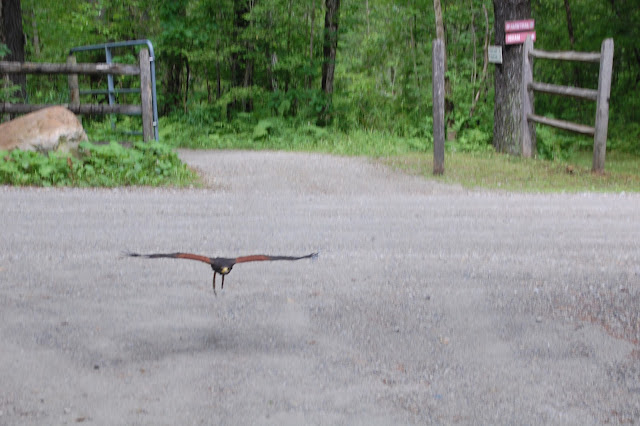 Then after you've taught the bird to hunt, and had him for a few years, most people release them into the wild, where as an adult bird, he has a better chance. 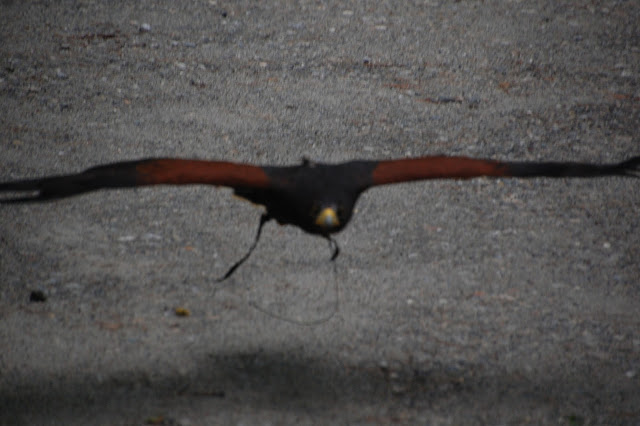 With all that's going on in our family right now, with my mother, we needed this day. 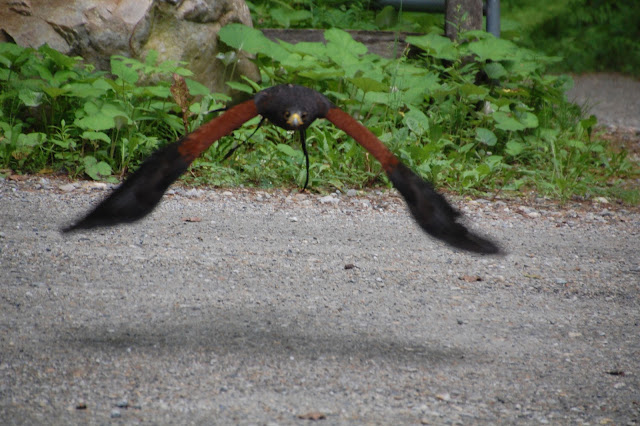 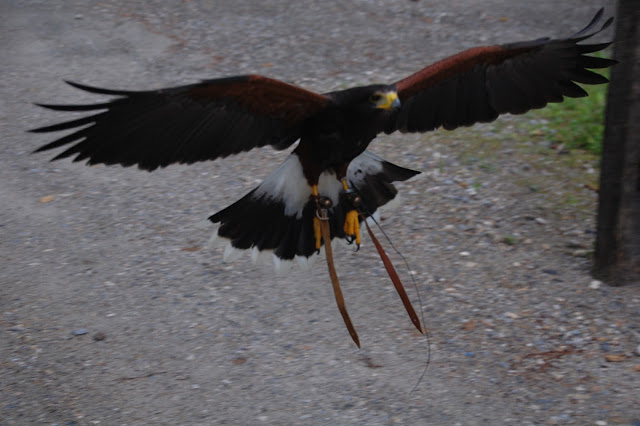 It was a such a special day, as any day is where you get to watch your child, grown or otherwise, shine their light. 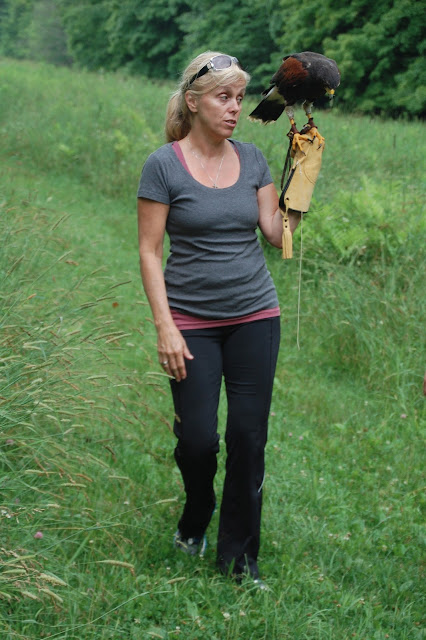 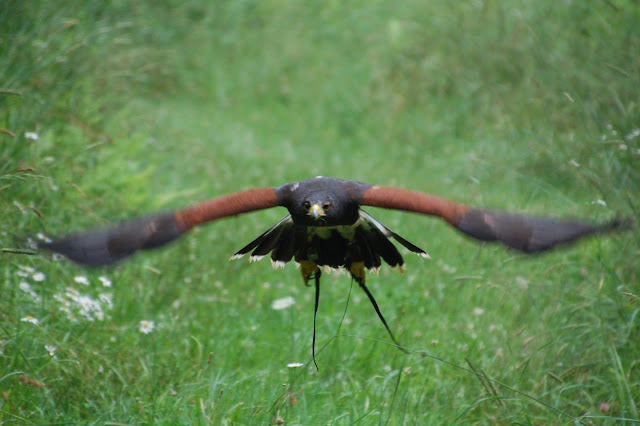 And believe me, this girl's got some light to shine.
I could not love her more. 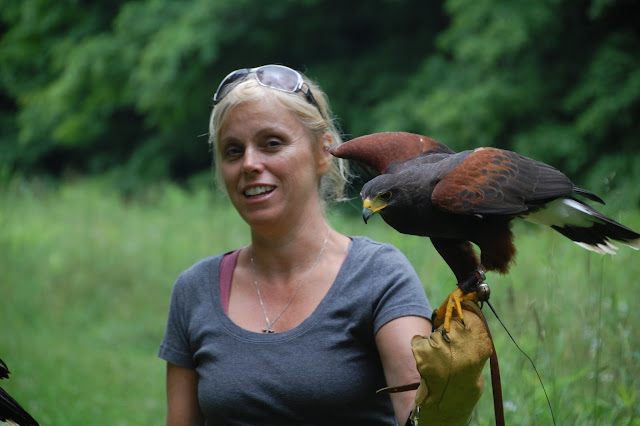 And, what an awesome experience. Such beautiful hawks.. we have many redtails around here, but I've never seen one of these.

Thanks for the information, I did not know most of what I just read in your post about the hawks.

Oh wow!! The sparkle in your daughter's eyes is beautiful; you captured some amazing images.

Wow- Hilary, these photos are amazing. I'm going back to read this again. I love to see someone find their passion. Hugs

I slowly scrolled through your photos, taking in every detail. What an amazing day and your love for your daughter brought tears to my eyes. Yes, you both needed this and what a wonderful day to share in her passion. XOXO

Fantastic! What a day you two had! I am totally jealous, but then I wouldn't get it like your daughter does. Obviously, she is a "bird lady".
Good for you guys!

That's awesome! We have a birds of prey lecture every year at our daughter's school and I just love the raptors. Also, if she hasn't already, you're daughter might enjoy seeing the 1969 film, Kes, about a young English boy obsessed with taming Kestrels.

what a fabulous experience - for both of you.

Wow! I wish I was closer; I would so add this to my wish list for Christmas!

Back in high school I was all set to become a falconer. I had the written test in hand, knew where my mews would be built, even had the nest picked out to take my hawk from. It never came to pass, but I have always loved watching the birds of prey that share my little corner of the world.

What an amazing day! Is it your daughter's plan to follow this woman, this teacher. and one day have her own hawk? That would be wonderful!

Oh, this is absolutely wonderful, Hilary! I loved every single bit of it and your photos are great. Thank you so much and please thank your daughter for letting you share it with us. I have a smile a mile wide!

WOW! Amazing and encouraging. I love the photo of her having a conversation with the hawk.

Your photography,especially of that hawk, was as awesome as your daughter's smile and enthusiasm. Thanks so much for sharing.

what gorgeous creatures they are and what a fabulous experience that had to be .. your photos are wonderful .. thank you for sharing all of it with us

Wonderful. I really enjoyed the pictures and the story. I didn't even realize there were falconantry schools. Thanks for sharing.

Wow! That is just fabulous! Everyone needs a passion!! Ours just seems to be seeing how many looms we can fit into our houses...hahaha! Off to see my Mom this weekend. She is getting very, very senile and unhappy and lonely. sigh. Glad you enjoyed your day off, Hilary!

what a beautiful bird. such an awesome chance to be one with nature.

What a great experience. Your wonderful photos capture it so well. And your beautiful daughter looks just like you.