Breathing a sigh of relief.

I know one thing, I am too old to stay up all night.
Good grief.
It wasn't my plan, but my mother was short of breath all night, and couldn't get comfortable.  I positioned myself downstairs, on the couch, and every time she moaned or got up or tried to find a better position, I heard her, and was up, too.
Made for about 3 hours sleep, interrupted.
Reminded me of those nights from hell when I had to work the midnight shift, and hated every single minute of it.  When I gave up nursing after 30 years, the thought that I would NEVER EVER EVER have to work the night shift, was priceless.

Yesterday, my goal in life was to get my mother  oxygen to use at home.  They should have discharged her from the hospital with it, but didn't.
Medicare, however, will not pay for it unless the patient has an oxygen saturation of 88% or less.  Never mind that they are gasping for air, look gray, and are frightened out of their mind with the feeling that they are slowly suffocating.
Nope.  Let's go for the number.

My doctor's office is the best.  It's hers, too.  The staff there are exceptional.  They have seen me through two brain surgeries, and in fact, the PA there is the one who sent all my paperwork to the Chiari Institute and said, "Can you see her?"

And they've seen a lot of my mother lately.
The goal yesterday was to see that magical 88.  We were there for two hours.   They tried walking her up and down the hall, she just hyperventilated and almost passsed out.
Finally, they said, "Just sit."
My mother said it was mind over matter.
Maybe she was right. 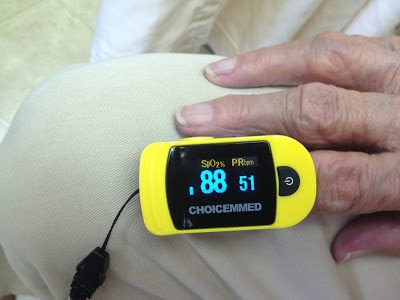 By 4pm, Lincare had been and gone, and we were equipped. 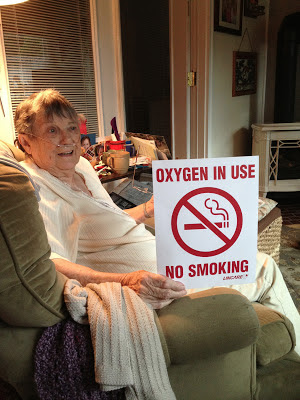 In no time, she was smiling.  That look of a "deer in the headlights" was gone.
In fact, for the first time in weeks, she sat and talked nonstop for about an hour and a half.
Relief. 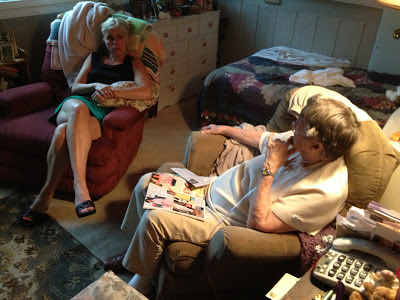 I know that the oxygen won't cure her congestive heart failure.  I know it won't save her from the inevitable.
But it WILL make her comfortable, and that's all that matters. 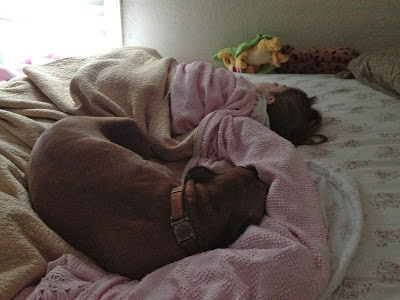 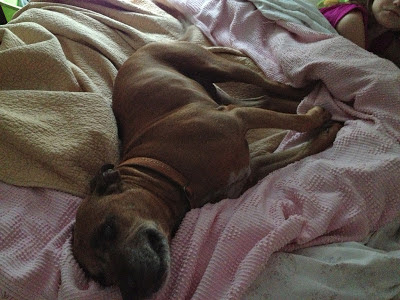 Aw - your poor mom. That must have been so frightening. I'm glad things have stabilized for now. She does look comfortable. I understand what you mean about not getting your sleep. At one time we could do it..now it feels like a truck hit us. Hugs to the whole family, Deb

Your mom is really lucky to have you looking out for her now. Hope you get some rest.

You should collect a calendar's worth of photos of Roy sleeping. They'd be a hoot.

I hope you can get some rest now. Looks like Roy has a spot next to him that might work.


I'm so glad she got what she OBVIOUSLY NEEDED!!.. and that you can rest assured knowing she is comfortable again.

Being comfortable is a truly big deal for people who are that ill. Take a nap today and keep your energy level up as best you can. Hugs to you and mostly to your mama.

So glad that you have a willing and understanding doctor. That picture of your mom says it all - she is much more comfortable. Sleep well tonite!

Oh my gosh- the things we go through just to prove we need intervention! Oh my word- I just feel for her and for YOU. Thankful for great medical providers that go above and beyond. Hope you can rest and relax now. Thinking of you!

Breathing is underrated! So glad the magic number was reached (!?) and that your mom is so much more comfortable. And that you have the power to help her. AND that you will get your sleep again.

OMG your poor Mom! Not being able to breath is so frightening. My sister's husband carries oxygen and when he has trouble she stays up with him and my Mom is getting there...Your Mom is so lucky to have you to know what to do!!!!!! Hope you can get some rest!! xo

Sorry to hear about your mom and glad she's more comfortable now. Makes you wonder who sat in an office somewhere and picked out all these arbitrary numbers. Geez!

SO glad that got handled ... i dont understand why things like that, that enable a body some comfort and to some extent should be considered preventative is such a hassle to get covered ... why does ALL healthcare coverage seem to prefer to pay for big expenses like hospitalization and surgery vs preventative care????????????? GAH

I feel ya! I have just started going through this with my Dad...on vacation! I put him in the hospital on the 3rd. He MAY get to come out tomorrow. We are at our cabin where it's been 103 - 109 degrees every day. I finally got a nap in today. The temps were cooler, company gone, Dad's nice and comfy in the hospital. Man, I like my eight hours of ZZZZZ's!
I am so glad your Mom is feeling better!

This would never happen in Sweden or Finland, that an elderly person would have to suffocate to get oxygen. I'm talking about the sorry state of health care in this country

Holding you and your mom in my thoughts.