Can I just tell ya, it's been a crazy weekend.

It started Friday morning, when I rushed my mother to the ER with chest pain.
Don't worry, she LOVES to have me post pictures of her. 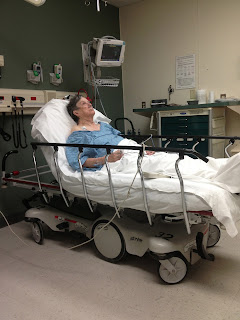 She is stable now, but of course, it entails me running back and forth to the hospital several times a day, taking her things, waiting for the doctor to come around, etc
She did have a slight heart attack, but you'd never know it.
Must be that tough British blood. 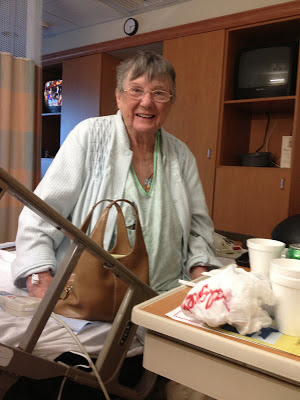 On top of which, it's been NINETY+ degrees, which slows a body down some.
Roy does not like the heat, and on the few, short walks I've taken him on in the last couple of days, he persisted in looking up at me like he was sure I was out of my mind.
I usually try to go early in the morning when it is going to be so hot later in the day.  It's much nicer for both of us, and it's usually quiet. 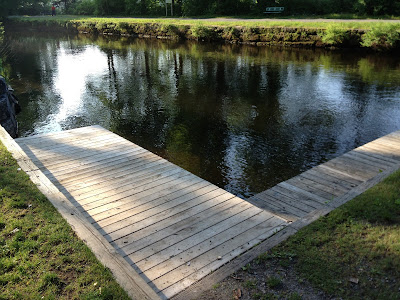 Then yesterday on the way to feed the cats at the studio, I had the aura.....you migraine sufferers know what I mean.  The jagged light in the corner of your eye.  I took some Motrin as soon as I got there, but it was too late, and the rest of the day I was pretty useless. 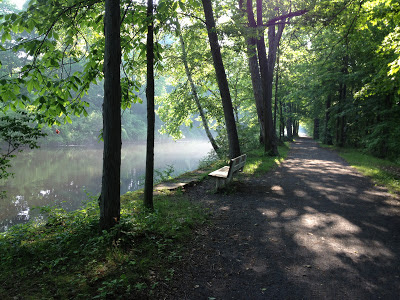 I put a warp on my 8 harness Baby Wolf, and maybe it's because my new brain doesn't work as well, or maybe I was distracted, or tired, or who knows what the heck else, but I ended up with the warp from H.E.L.L.  Me and my migraine were no match for it.

I am still not done with point twill. 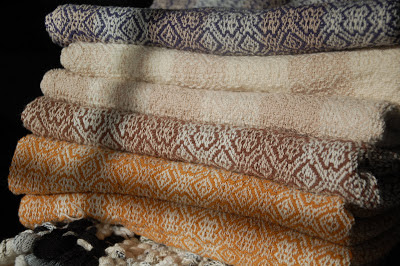 I am making a baby dress for my new grandbaby, and realized when I got the front done, that I would not have enough yarn, no matter what the pattern said.  And btw, I am not impressed with Debbie Bliss' instructions.  They suck.
Good thing I am stubborn.  Or so it's said.  And I called the store, they had a couple of skeins of the same dye lot left, and they are sending them to me.
I am going to make little mary jane shoes to go with it.
It's not newborn sized though, it's for when she gets on her feet.  See me grinning??? 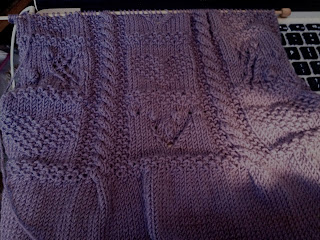 This afternoon, the sky opened up.  It rained and rained and rained, then thunder and lightning so close I thought it hit the house next door.  Then sirens in the distance.
When it stopped, I decided to take Roy for a walk in what I thought would be nice, cool, after the rain trip.  But as we got down the road, the sky opened up.......again.
I'm sure he thinks I'm crazy now.
Not to be deterred, we waited an hour, and tried it again.  This time was a go.


And now, the sun is shining, and it is POURING once again.
But the flowers need it.

And I'm ready for the week. 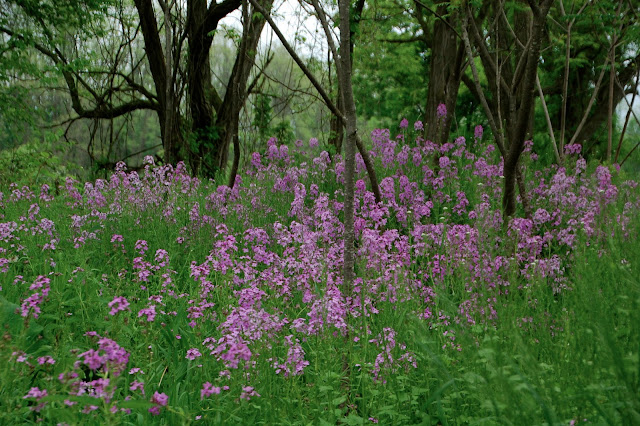 looks like your mom is doing much better (i hope).

i remember when you got roy. :)

We are just now getting that dark cloudy spitting sky as night falls...

Glad your mom is relatively OK, she looks wonderful :-)

Ben doesn't like the heat either, and the further we walk, the slower he goes, looking up at me here and there, like.. really?... and so we go back home.

Goodness- I'd call that an eventful week! I pray your mom is recovering well- minor as it may be, its still kinda major when its your heart :) We just got our first sunny day in a weeks worth of rain... :)

Goodness, that was the weekend from hell. Glad your mom is ok. She is quite the lady, eh. Strong.
We are having a heat wave and rain now and then. It's supposed to cool off this week. Kane agrees with Roy; no walks for him either when it is stinkin' hot. Hugs

Sorry about your mom's condition. Wow. Hope she is p and running again soon. Love that last photo. We had rain today too, goog thing, since the garden needed it and it also cooled things down here. Just can't take the heat of summer.

Glad your mom is okay. Hope she stays that way for a long while!
I am so happy to be out here on the coast of California. We get the heat, but then we get the fog and neither of those conditions make us stop walking. (Those of us who walk...not me just yet)
Hope everything goes well for you with all those storms back there!

Gilda Radner said it best..."It's Always Something!" I think your life really does exemplify that saying:-D Sorry about the heat...I'm wondering why do I want to leave 70-degrees and no humidity after hearing about the rest of the country!! XOXO

Now we see where you got your fortitude from!

Hope your Mom is well and your headache subsides.

It looks like your Mom is a force to be reckoned with. I wondered where you got that. ;) I hope she's recovering well. She sure doesn't looks like she's had a heart attack. Strong woman.

That walking path by the foggy waterfront looks so lovely. And gotta love that Roy Boy of yours.

Hoping that your mum is feeling much better, she looks like a lovely lady Hilary !
I hate to moan about our weather, when those poor folks in Oklahoma and other areas are getting slammed.
I'm sorry to read you are still having headaches, sending you healing wishes.
Gorgeous flowers, do you know what kind they are ?
Hugs,
~Jo

dont know if you know this or not but next time the shimmering lights (thats what i call/think of them as) begin, grab a cup of black coffee .. caffeine works like a charm to hold off the actual migraine ... hope you're feeling better ...

Stubborn and strong, you are.