A little point twill and some renovations.

My head told me, about 5 a.m., that it was cold and gray and gloomy.   I didn't even have to open the blinds to see if that was correct.
I knew it was.
But I held on to the vision of my "waiting warp" and kept moving forward.
Some raisin toast and tea and Motrin.
And a little attitude thrown in for good measure.
Hell, yes.  I can do it. 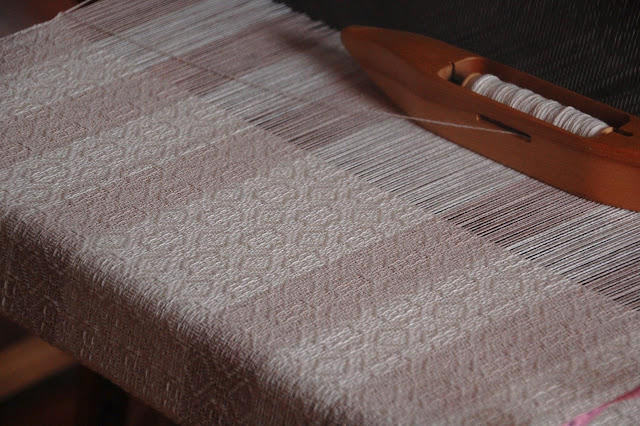 Just recently, I spent my tax money on insulation.  The taxes will wait a bit.  I was sick of being cold at the studio.  I did some research, and all the "old house" gurus said: insulate the floors, and the attic, and stop all cold air everywhere by blocking up all the places it comes in.

So for a week, L and I heard pounding and commotion beneath us as we wove.  The floors are almost done.  I had to stop when my money ran out, and will continue again when I can.  But almost the entire ceiling in the cellar is insulated, and the difference is very apparent.  It is an old dirt floor basement, with stone walls.  While my worker bee was down there, he caulked up all the places in the stone that let air in, and he built an insulated "inside" door to the hatchway outside.  It's even warmer down there.
I want him to finish that, and then as money allows, insulate the attic.  I believe it's money well spent.


Then I have this other idea brewing in my head.   It's kind of in preparation for the day when I live at the studio.  Someday.
There is a small half bath off the kitchen, which in itself is really not appropriate in my book.  I do not like bathrooms off the kitchen.   Not. 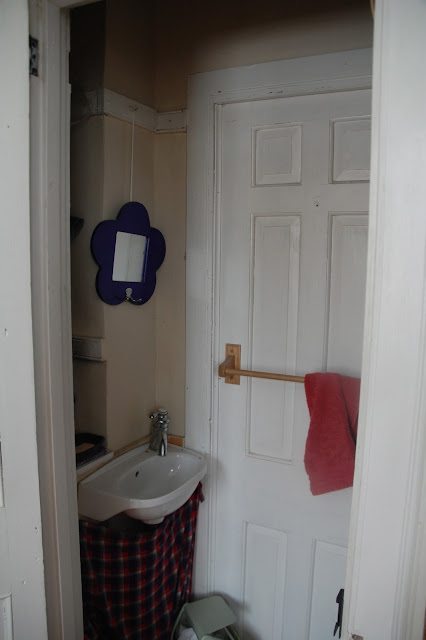 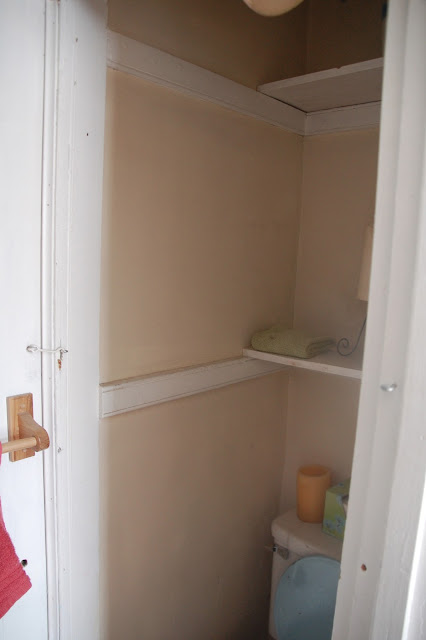 And the kitchen is small, and not very efficient.
Right next to the kitchen is the old dining room, which of course is a "loom room" at present.   It is a little dark.  The windows face west, and I built the porch on that side, so the room never gets much light during the day.
That's the bathroom door with the blue Restroom sign.......see the dining room to the right.....how dark it is? 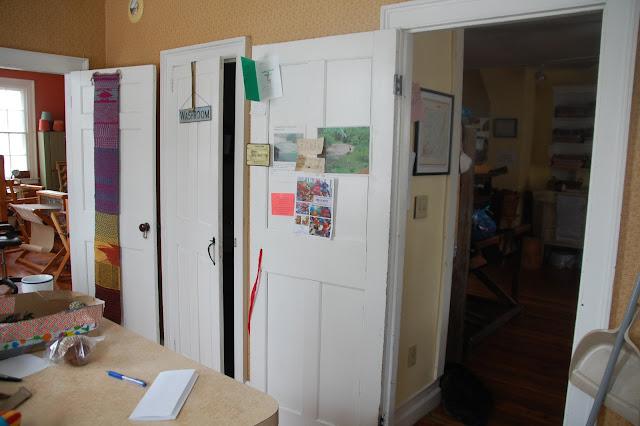 So..........I say MOVE the bathroom.  Yup.   I want to do that first.  And I have the perfect place for it.
Eventually, this wall from the doorway on the right, moving left, would be gone.

Originally the kitchen used to be on the other end of the house.
Here. 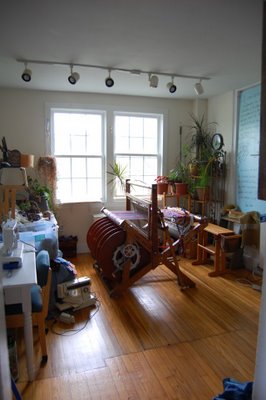 And then the house was a two family for different generations of the same family. So another kitchen, the one I have now, was created.
The old kitchen had a huge pantry, which I use for fabric storage.
Here. 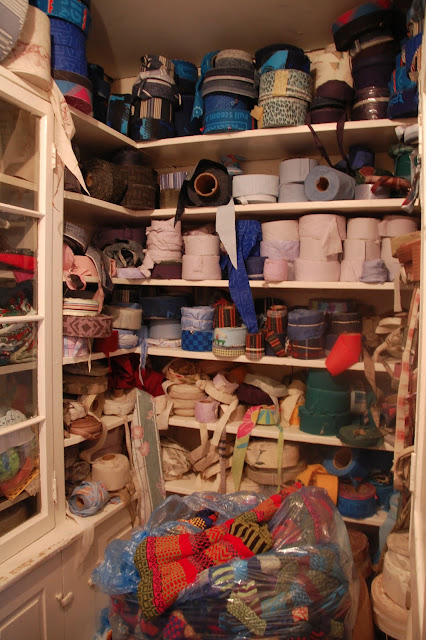 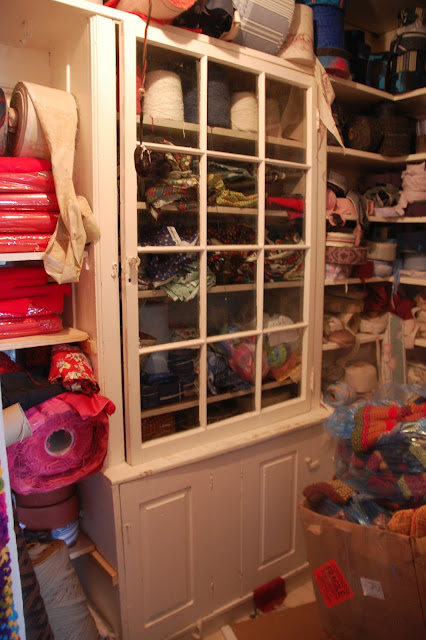 My big concern is  the built ins.   I want to save part of them.  I think that if we tried to move them, they wouldn't make the move well.  Tearing them out would probably include breaking them. 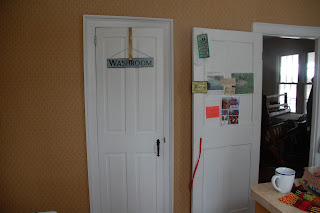 And there being an island here, with room to work on one side, and places to sit on the other, and lots of storage underneath.
The island would be right about where that cupboard is.....looking at it from the other side. 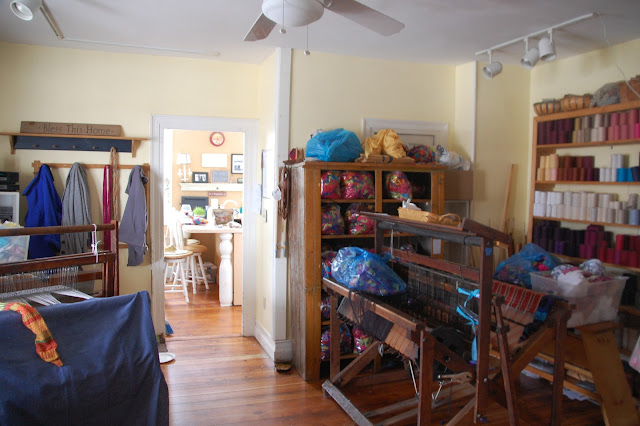 This would also really brighten up the dining room, letting light in from the kitchen (that has never known a dreary daytime moment ever)

I do anguish a bit over changing the old house.  But then again, I think that as well as the previous THREE owners since 1790, I am part of its history, too.  And I think that I am only contemplating what others have before me: making the house functional.
Because back when the house was built, there were no bathrooms.  Both bathrooms in this house were added on later.
It would also be better for heat......the dining room is always the coolest room, and this way the heat from the pellet stove would have a better flow there.

Now who wants to move all that fabric up to the loft???

Nice to see that you're not taking on too much. ;)

I'll take the fabric up there for you!

I love old homes. To me it is amazing that there have only been 3 previous owners to your house.
The pattern you've chosen is pretty damn cool too on your weaving.
xo

I love the plans you have, it all sounds terrific! And hey, we had to make changes to This Old House to make it do-able.. as did the previous occupants, since 1835! So.. go for it. I love the idea of you moving there for good, it's such a pretty old house.

Oh, I hear ya'. Go for it. We also suffer from the bathroom-off-the-kitchen idea. I assume they wanted to keep all the plumbing as simple as possible back when indoor plumbing was new. Like when we all use to have just one phone per house and even an extension on the line was a big deal...Definitely like your floor plan better.

you are amazing ... never change

Mmmm... yes! Spring is your inspiration alright! Love your ideas for the house and your current weaving project is absolutely gorgeous! Let us know when you list in your web shop! :-) I always thought bathrooms off the kitchen were kinda gross... but, it seems a lot of the houses were built that way... in fact... ours is off the dining room... and that was done after the previous owner did a remodel...? lol!

I say talk to a good remodeler - I bet you could SawsAll out the builtins in one piece and incorporate into a bathroom - or move them where you will. It is amazing what they do nowadays.

I'm in the mood to remodel a bit too! We've lived here 11 years; longer than any other home, and I want to go through and repaint, update, and decorate...but where I'm going to get the time! I haven't figured that out yet. Cheers for seeing the possible, XOXO

I love the weaving you have on the loom, your point twill. Is it towel material? Where did your pattern come from? So nice. Love old houses and their history too.

How fun to consider all the changes you could make, all in the name of improvement and easier living.