What a beautiful day out there.  Roy and I were down by the river walking early, so early that there was no one else around.  That is perfect if you ask me.
It always feels good to get our walk done as soon as I get up.  I don't always do that.  For a long time, mornings have been iffy, at best.  I would get up because my head hurt so bad, then I would sit on my end of the couch, with a cuppa tea, quietly, waiting for the Motrin to kick in, or for whatever was unhappy in my head, to settle down and let me function. 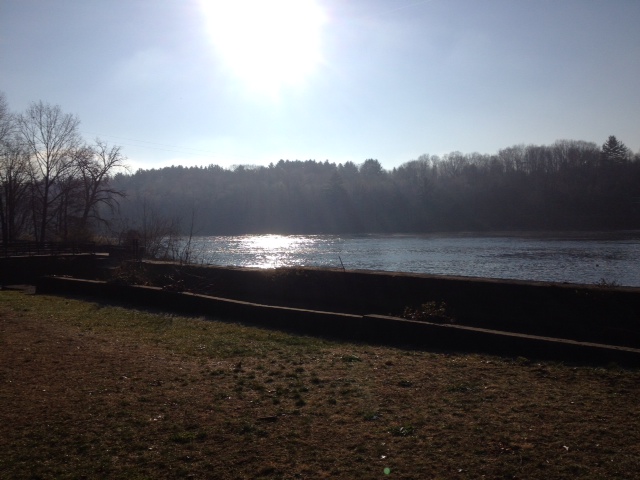 Today I feel more normal, and more like myself, than I have in a very long time.  Headache just a dull background noise.
Doable, totally doable.

Then I went to the studio.  I am going to try to keep the studio open  10-4 on Saturdays and 10-3 on Sundays, until Christmas,  then I will take days off during the week.
It will be good for me in other ways.  I don't get much quiet at home, and being at the studio with the cats is good therapy.
L put the sectional beam on my Schacht for me.
It is ready to rock.
Don't get me wrong.  I have warping boards, and I have put on many a warp that way.
I teach it that way. 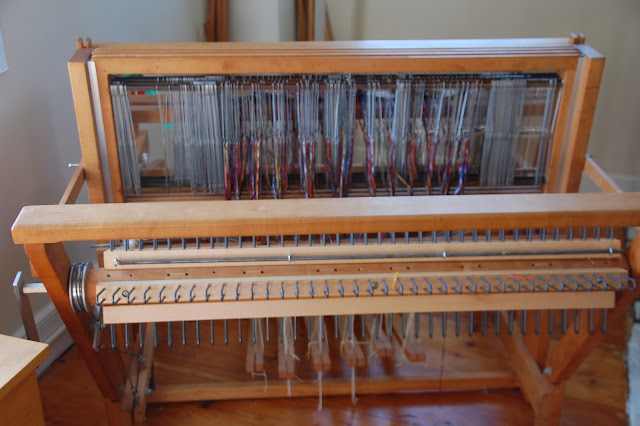 But once you have experienced a sectional warp beam, and realized how much less stressful it is, it's tough to love that board.
Yes, this is a Leclerc sectional beam I used, but I prefer them, because the threads don't hang up on those metal pieces shaped like a U. 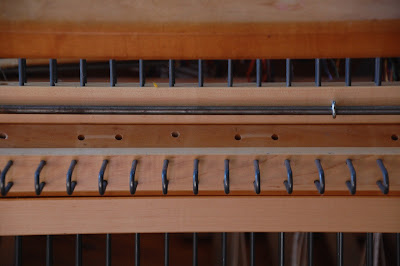 Here are two of the Mobius shawls I have made recently.....I say recently...the truth of the matter is that I would weave about 10 inches at a time.....PER DAY.......they took forever, but it was the best I could do under the circumstances.
I made three, but one was purchased yesterday, when two ladies popped in to see what I was up to. 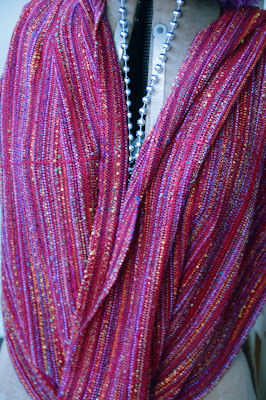 Same warp, different weft.
I put the warp on using the warping board, and a PADDLE......so I only had enough for three of these......which prompted me to ask L to help me with the sectional beam which has been sitting on the floor next to the loom for some time. 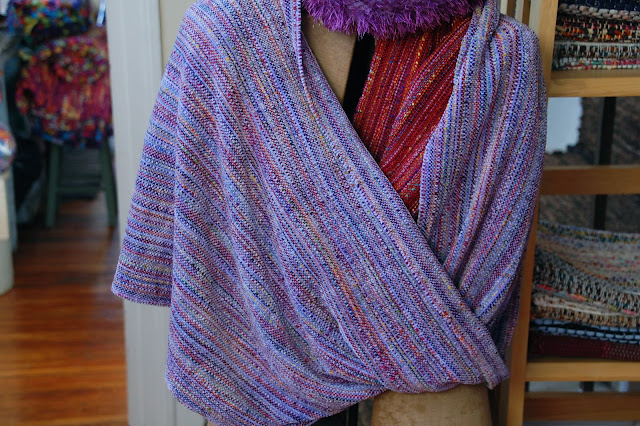 Picking out the colors for my warps is probably one of the things I LOVE the most.
Gets me pumped to weave.
Here is what's going on next. 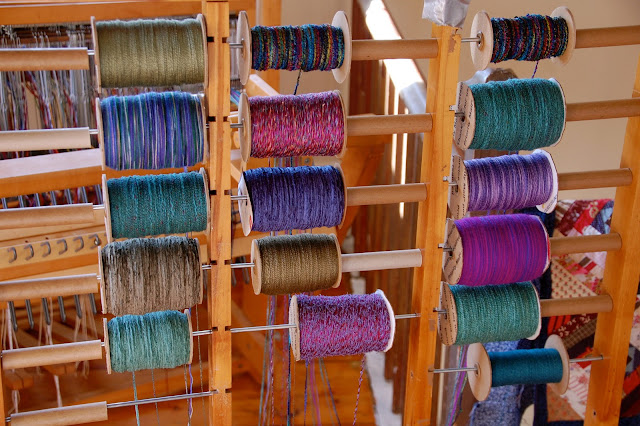 Only on this warp I will have enough to do SEVEN shawls.
Now that's what I'm talking about.
And no two will be exactly alike. 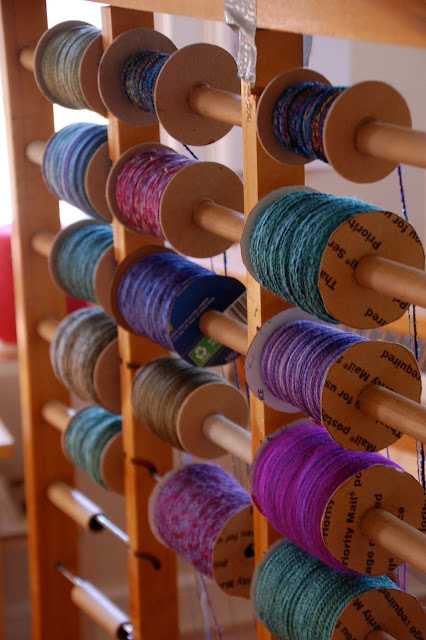 That's the Schacht, and where I will be weaving these shawls, a little at a time for sure.
Can you think of a sweeter spot to spend a morning?
The sun makes the floors just glow.
I love this old house. 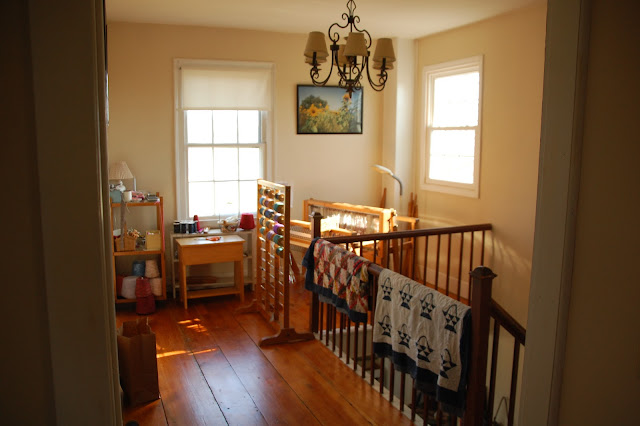 Have I told you lately how precious life is??  Every minute of every day??
Well, it is.

I'm so happy to know that those &$%#$% headaches are diminishing. Love the shawls. And that sunbathed room looks lovely.

I love those buttery wood floors and the light coming in your room in that last photo. Don't do too much, my friend. Like your 'up' post here ~

Glad to see your feeling better.
The purple wrap is just beautiful.Hoping you have a really good week.

Such a fascinating craft . Love all those pretty colours and those shawls are gorgeous ! So glad to see and hear you are feeling better , takes time but one day at a time right? Going for a walk in nature and taking photos is my favorite thing to do with my Miggs ! Lovely photos . Have a good day !

That does look like a sweet spot in the sunshine to ply your craft a little at a time. With cats. :)

Ahhh...peace! What is it like? Do tell.
I am so happy that you are sounding and feeling so much better. Please remember what got you to this point today and do it again and again.
I love those shawls!

Those shawls are gorgeous... and yes... the sunshine room looks like a very relaxing and peaceful place to spend some time.... dreamy!

What a gruelling journey you are making. You sound optimistic and good for you to plan more shawls. Thinking of you. xo

Beautiful mobius shawl. Would you be willing/interested in sharing a pattern?

love love love ... and have been itching for an infinity shawl/scarf ... how much? xo

The shawls are lovely, The house is lovely and YOU are lovely. So glad that you're feeling a bit better.

So glad you are feeling better. Your weaving space looks like a piece of Heaven to me. Take it easy.

Thank you thank you thank you a hundred times for reminding me. Your knowing is so important to me. I take it in as real and true and mine. Each moment, each day is precious and totally unworthy of stupid sniveleyness. xoxo

The house is your sanctuary. I don't think the cats would mind if you spend more time there. Bring your knitting and take a nap too.
I was very concerned so I am happy that the headache is lessening.
The sun shining on those great floors, with a loom in the corner. SIGH.

Just a weaving/loom question here, I am wondering how you put the LeClerc sectional on the Schacht? I have the baby wolf and Love, Love, Love it, but with a sectional beam it would be like going to heaven- Right?. Can you e-mail me about that? Deb