All of you are, of course, so right.

I guess it snuck up on me, feeling better and doing more.  A little more every day.  And even while I am no where near doing what I used to do in any given day, it is apparently too much for my neck, and my head.
Ack.
I know I am incorrigible.  But honestly, for most of this past 9 weeks, I have behaved myself pretty well.  Lately I might have pushed the envelope a bit.  And I needed reminding.......thank you.

Today I did very little.  And I went for a massage of my upper back, shoulders, and neck.  I am going again next week for a more extensive one.  It did feel great.
And I emailed the doctor and told him about this revolting development. 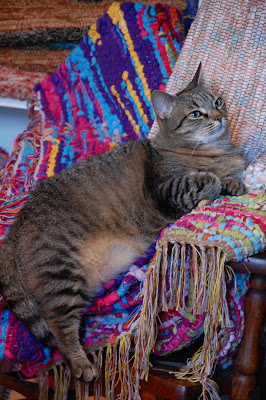 I want to tell you a story.  About Irene Hooper.
The reason you are hearing this story, is because I have heard it approximately 12 times in my lifetime, and figured once wouldn't hurt you.
I heard it again today, while taking my mother to her appointment.

When my mother was a little girl in England, she met a girl in the school yard, named Irene Hooper.  They became friends, and spent recesses together.  Irene was wearing a necklace, that my mother coveted.  She told Irene what a beautiful necklace it was, and asked her where she bought it.  Not sure why she asked, since my mother's family were poorer than church mice (pun intended, her last name was Church).   But Irene was happy to tell her, that she didn't buy it at all, she made it.
Then Irene offered to make a necklace just like it, for my mother.
Well, you can imagine, little Daisy Church was thrilled, and every time she saw Irene in the coming weeks, she asked about her necklace.
Finally, Irene said, it was almost done.  My mother was very excited.

Then, suddenly, Irene Hooper died, of rheumatic fever.  She was 9.

Daisy's first thought was:  now I'm not going to get my necklace.

So, according to my mother, her shame at having THAT as her very first thought, has made her remember Irene to this day.
And now Irene lives on in her memory, and probably while everyone else has forgotten little Irene, my mother has not.
She hasn't forgotten the necklace, either.

So now you know. 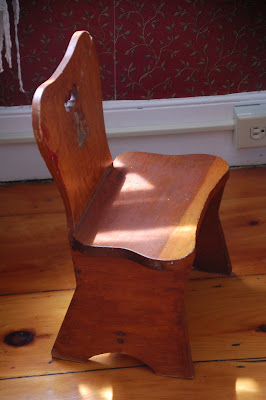 I am intending to back up from here.   Doing less, resting more, massages, hot tubs, whatever it takes to get rid of this headache.
Hopefully, the doctor will answer me.  My guess is that he will direct me to do just that.

Flash back.
This is my grandson, on 8/11/11.   I took this picture, put my Nikon on a rock, and stepped into the water.
That's when my life went sideways.

Whatever complaints I had that day, about life in general, were meaningless.
My life was incredible.  I took it for granted.
Fifteen months and one brain surgery later, I know the difference. 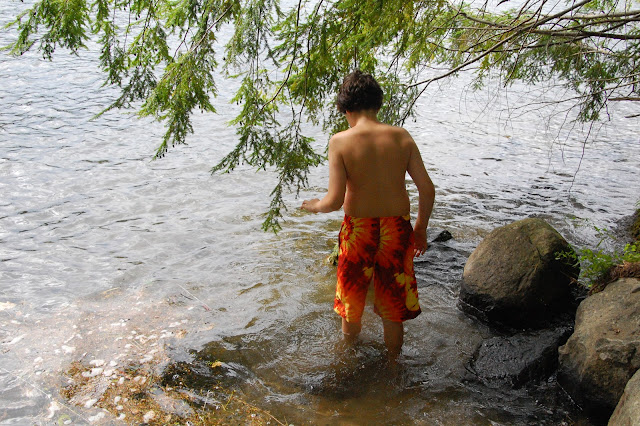 Don't take your life for granted.  It only takes a second for it to all change.

That's a wonderful story about Irene Hooper and your mother. Kids are egocentric so it's not so horrible that it was your mother's first thought. Clearly it has troubled her through her life. You cracked me up with the line about having heard it 12 times and that you figured once wouldn't hurt us.

Keep on looking out for yourself my dear namesake. You're hardheaded .. that rock was no match for you. Keep us posted.

I have several of those stories from my parents that I've told over and over again--lesson learned:-D I'm now interested in what the necklace looked liked that intrigued your mother and why did it take so long to make? (Are you sorry you told the story...tee hee)!
Do take care and continue to pamper yourself, XOXO

Oh Hilary, we're all rooting for you to be well and pain free. Please, please take care of yourself and stop pushing yourself to do ANYTHING, even walking Roy Boy. Your body is talking to you. Listen. I'm so encouraged to hear that you are doing things to ease the pain and to care for yourself. It's just awful to hear that you've got a headache, but I think there is still cause for a lot of hope that you will beat this. IF you slow down, IF you listen to your body. IF you check in with your doctor!! That's an amazing story about Irene and Daisy; thanks for sharing it. Be well, dear one.


Hilary, I love that story, thank you for sharing. Imagine how vivid that experience still is for your mother. I wonder if you could contact Irene's family and tell them the same story. That necklace might still be sitting in someone's box somewhere... I know it wasn't about the "necklace", but can you imagine presenting it to your mother, a piece of her past, a friendship she still treasures... and apparently a necklace too :-)

Hang in there Hilary. I have faith you are going to be back to yourself soon - maybe not as soon as you wanna be, but soon.
There are no timelines- live for today, live in the moment, and take a note from RoyBoy and the kittens - live for today, take it easy, have fun, and enjoy the sunshine when it's shining.
I'm a testament that you never know what will happen from one day to the next. I've had more than my share of cancer scares, a major heart attack (my heart actually stopped), a few surgeries, and a lot of emotional ups and downs (lots of downs). Living in the moment, doing what I love, and soaking up the sunshine (and a great massage when I can afford it) are the joys in my life.

I love all the 'old stories' that mothers tell. I used to sit with my mom and her two sisters while we all had tea and my aunt's famous peanut butter cookies and listen to all the old tales over and over again. Never laughed so hard in my life.It was hard to picture the women who now sat in front of me to be doing half the stuff they confessed. It was funny. Your mom carries that feeling of guilt with her and always will. It's one of those things like 'regret' that follows us the rest of our life.
I'm glad you are taking it easy. Just do it a little longer.

Our first thoughts on hearing any shocking news are usually not at all what we would expect, and are often what would be socially unacceptable. It's our mind's way of coping with these things, we reach for what is controllable, understandable, what we can actually grasp.

Please continue to take it easy as you recover.

A wonderful story about Irene and your mum . Your mum is British ? So were my parents ! I had joined your blog during your recovery and never really knew what had happened to you I am so sorry for this and all that you have had to endure . You are so right never take things for granted my mum & dad had instilled that in me as she grew up in England during the 2nd world war and my dad a British soldier . I do hope you take it easy and let yourself rest and recover and that your head aches subside ! Life is to short to rush it away , take time to enjoy every moment ! Take care dear friend and remember Rome wasn't built in a day !

I am glad you are going to take it a little easier. I have to admit I was worried about you and thought you were doing too much. Weaving can be hard work and hard on your body.
Many years ago I had major surgery, it was not brain surgery but it took me a year to regain my strength and begin to feel like myself. Listen to what your body is telling you!
The looms will be waiting for you when your body is ready again.
Great story!
Louise

First, I hope you are resting...And that really was a wonderful story. It is incredible how fast life can change...when I got sick I didn't even have a doctor. I never got colds. I remember having the flu once and when I was shivering in bed I actually thought the power had gone off and my electric blanket was not working...it wasn't until the morning that I realized that I was sick. So years later, cancer was a life changing event. Every minute counts. I know we can't live like that all the time but your story is a wake-up call. Life is very precious and sometimes as fleeting as Irene's. Hilary, please rest when you can and enjoy when you can!

It's all so precarious. God Bless Irene.

there is a thred that runs through women that connects us all....you thread of wisdom, all that you share, is connecting those who read with you in ways that are woven.....only another weaver would understand that - or a woman whose thread you are tensioning by your thoughts on this blog.....be well....you are making others well by reading your words....

blessings - thanks for sharing the story - I'll remember it.

Thx for sharing this story.
And good for you that you will slow down.
Just remember it is a zigzag track - you will forget and do too much and then slow down, over and over again.
But finally, the day will come when you do too much and it is just enough.

Love this blog, you are a remarkable woman.

You know Hilary, It's great to hear your wonderful story. Very interesting indeed. And as for me, You are a truly smart person. Keep it up.

Oh yes. I know. Only takes a second.

SO gad you both got in touch with the doctor .. a phone call would have maybe gotten you a faster response but you did contact him and the massage ... oh Hilary massage is one of the best things you can do for your mental and physical health .. since signing up for a once a month massage at a local spa I have had less lower back issues and some say i am a little nicer person ... of course those who don't agree still out number the ones I've fooled

LOVE the Irene Hooper story .. now she will be remembered by me too ..

I don't know what to say other than I hope that the doctor gets back to you.