Yes, it does.
Sometimes doing the 'right' thing isn't the 'easiest' thing.

Let me tell you about my day, or at least part of it.


Grandson came to mow my lawn, which is not on my list of preferred tasks any longer.
We were having lunch out on the porch, when my daughter said, "What the heck was that?"
Well, it turned out to be yet another stray cat, on a dead run for the food bowl.
Next and Enough looked unconcerned.
This little cat let me get close, I went and got her a can of the good stuff, which she gobbled up. 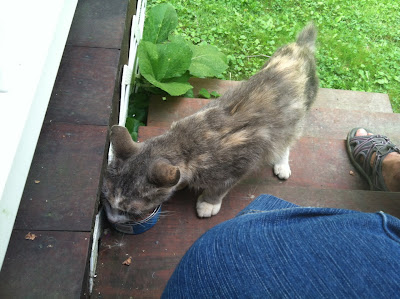 She was so small, she looked to be about 5 months old.  She was so thin, her spine was this bony ridge on her back, and I could feel ever single one of her ribs.  She was a manx kitty, like Kizzy, with no tail.

So after she ate, I put her in a crate, and drove her to the vet's.
Yes, to feline leukemia test, to worming, to rabies prevention, to neutering.  Calculating the impact to my checkbook.
Oh, well.


She was obviously someone's cat at some point, because she was very sweet.  She also did not appear to have any claws.
But by the emaciated state she was in, it was easy to conclude that she had been wandering for some time.

I no more than got back to the studio, when the phone rang.
The vet.
BAD NEWS.
This cat is 4-5 YEARS old, missing teeth, enlarged liver, enlarged kidneys, in other words, one very sick kitty.
Most likely very contagious, and not a good candidate for treatment of any kind.
After a long conversation, I agreed with her suggested option, euthanasia.
The cat had not been neutered, could still have kittens, that could be born sick.
She could make other cats sick, and her quality of life sucked, pure and simple.
I know it was the right thing, but it felt like a kick to the chest.

Then, adding insult to injury, I could pay $150 to dispose of the body, or come fetch it.
Back to the vet's.
Then back to the studio to dig a hole, and bury the little kitty that I had hoped to save.

Sometimes, you just have to accept that life can be hard.

But in the back of my mind, I wonder......how did this little girl get to this place.......someone cared......she was so friendly, and de-clawed even......don't get me started on that barbaric practice.
Yet, she was out wandering, sick and thin, searching for food and comfort.
What happened?
I only wish she had shown up sooner, when she still had a chance.
Yup, sometimes, reality bites.


But no one said that would be easy.
"Enough" said. 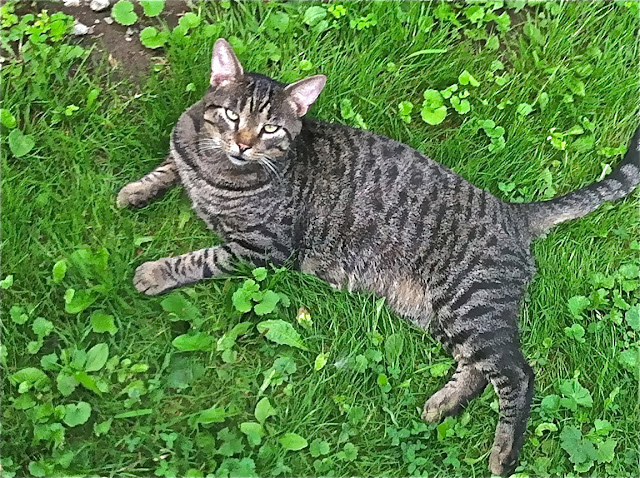 Hi H-
I know it's easy for me to say that you did the right thing, but you did. We have to concentrate on the ones we can save. It's triage in these desperate economic times. I've taken in 5 and my neighbors are taking in at least 3 or 4. We do our best. At least the little one was treated gently at the end. Mary A

Hi H - and remember that you did "save her" from a very slow and painfall death from stavation. And you gave her some love that she desparately wanted. You did the right thing, as hard as it is to do, it's the right thing.

I picked up a kitten that had been hit by a car. Took it to the vet and he said she was past saving. Had her euthanised and buried her in my back yard. It broke my heart. My only consolation is that I ended her suffering. Sometimes our options run out. You did the right thing.

Hilary, bless you for having the courage to do the right thing for the sweet little thing. I thank you as do all animal lovers. You rock!

Well, that sweet little girl and the whole situation got me crying. I'm glad she was directed to you, so she could be given a fast demise, rather than a slow awful one. But it's so, so sad. Poor little thing...

Hilary, Reality does bite especially for those whose care and love comes right from the heart. Thank you for stepping up to the plate and doing the hard job. It's heartbreaking this little girl didn't get a chance for a longer life, but even though her people failed her miserably, you didn't. Big hugs to YOU and hugs to all the furkids lucky enough to feel your loving touch and tender heart.

Tough day, so sad. I can totally relate too, as I have experienced that several times. Lee Anna is right though, you saved her from a very slow painful death and you gave her a last positive experience with a human. My heart hurts for you as you hurt.

Sorry Hilary. Life's a bitch sometimes. You don't realize at the time but you did the best thing for her. She would have starved to death, alone and in pain. I had a similar experience once. It really hurts. That made me more determined to get the word out about spaying and to help any cat that crossed my path that needed help. Never to turn my head. Again, so sorry to hear this.

Hilary, you are a good cat mom ... You already know this, but sometimes (I hope) it helps to hear it out loud. Your kindness comes through every word you write, and I admire your love and strength in the face of tough decisions.

My sympathy on having to make that tough decision. Many times, when bottle raising orphaned kittens, we have lost some or had to make that same decision, and in fact, i'm facing it with two foster kittens right now. It's never easy to lose them.

The cat was probably suffering liver disease because of being without food for so long, and once they reach a certain point, all that can be done is what you did, take care of the cat by not letting it continue to suffer.

Thank you for caring and going out of your way for this kitty.

You just can't save them all, HIlary. Appears she was much loved at some point, but once they get out of the house they wander. They get sick... well, you know how it goes. Thanks for trying your darndest to do the right thing. Poor kitty.

Me again, Just back from walking the dog and could not shake this experience you had.a What angers me the most is that this cat was de-clawed but not spayed. Who does that?I hate to see cats declawed and it is usually done at the time of spaying. This cat was just declawed? Vets that do this should lose their licence. Just me ranting after a walk. Take care, Hilary.

Hilary, you showed her kindness and then humanely ended her suffering. Her end was better than the part that came before it. Good job, although I know it felt like hell.

If it had been my cat that was lost, ill, hungry and suffering, and I could learn that someone found her, gave her a good meal and a quick, gentle release from her pain, I'd be very grateful and appreciative. Somehow, that cat sought you out for help and you didn't let her down.

You did save her. You gave her a good meal, some love and did the responsible, humane thing that perhaps her "owner" wouldn't do.

I had to do that with a stray that I took in...Lucy.
Ferrel but very sweet.
Lucy was a floozy and when I found her she was "with kittens".
We kept one, names her Ethel.
After they were able to go to the vet I found out both Lucy and Ethel were very sick and had to put both down at the same time.
Boohoo'd like a small child.

Oh Hilary, tears are rolling down my face. There just has to be a reason the strays gather to you, aside from the fact that you feed them. If you didn't care about them, you never would have put out food the first time. They know through the catline that you will care for then and love them and keep then safe. Animals don't just go to anyone, they Know who will love them. It totally sucks that this little kitty didn't find you sooner, she would have had it made in the shade, but I think she knew you would love her and help her onto her next journey, with as little pain as possible.
I am disgusted by the people that just throw away their "pets", pee on the carpet...get rid of them, shed...get rid of them, don't match the new sofa...get rid of them.
My heart goes out to you.

At least she ended up at your place and you did the right thing for her...but you're right, it's hard and sad...

That's very sad for the poor kitty. So kind of you to take her to the vet and try to sort her out. You were right though, she would get sicker and more uncomfortable and make others animals ill.

So sad, but glad you were able to do the right thing for her.

Over the years we have had a few strays come by. My cats always make them understand that this place is already theirs. Except for one time, when they accepted the little black girl that showed up. When I got my hands on her, I felt masses on her belly, which my old vet confirmed were cancerous. I held her while they gave her the shot, and she purred the whole time while she fell asleep for the last time. Sweet man never charged me a penny for doing the right thing. Still makes me tear up to think about her (happened about 10 years ago). I will never understand how someone could have just abandoned her when she got sick.