I do seem to be taking a lot of days off lately, don't I.
I think I'm making progress in that direction.
HH was/is instrumental.

Years ago, when I first started weaving, I bought a used Leclerc Mira loom.  It was too short for me, I'm 5'9".  But I didn't know any better at the time, so I wove on it for at least a year, or more.  I had a permanent muscle cramp in my shoulder blade.

There was so much I didn't know, and I struggled trying to get the loom to do what I wanted.
Somehow, I came across Tom Beaudet, on an online weaving forum.
I emailed him, asking for his advice, and he was kind enough to listen to my tales of woe, and he took the time to help me figure out the answers.
Over the years, I have talked to him often, and finally went to Massachussetts and met him.   I bought two looms from him.
A year later, he came to visit Crazy as a Loom, and he gifted me with another loom.
So you could say we have history.

Tom graduated from high school when I was ONE year old.  So he at least 80......or so.
But I aspire to be just like him.  He is the youngest 80 year old I have ever met.  He is interesting, interested, he is living his life with commitment and purpose.  He is a weaver, but more than that.  He knows more about looms and weaving than I could ever hope to know.
I am smitten.
You can read about him HERE.

So today, I went to see him yet again, to test drive the Leclerc WEAVEBIRD, something I have wanted to do for a long time. 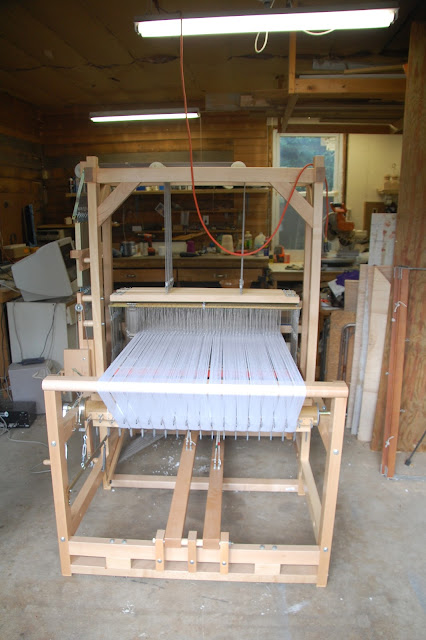 I know that someday I am going to want a computerized loom.  Something that never, ever has to be tied up, so I will never have to crawl around under the loom ever again. 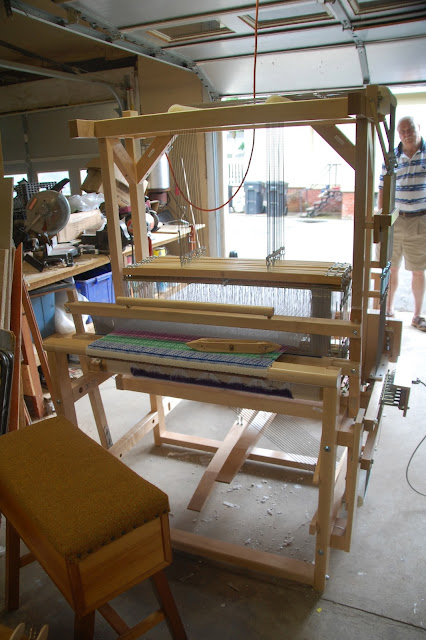 I got to weave on this baby, and it was quite sweet.
I loved it.
I was afraid that I would.
I'm an addict, you see.  I think I've told you that before. 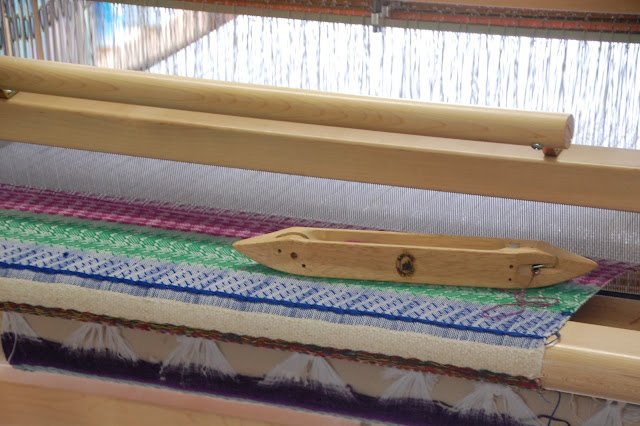 I told DH to take a picture.  He did.

I should have told him to take 10 pictures, and he would have.

But you get the one he took, for what it's worth. 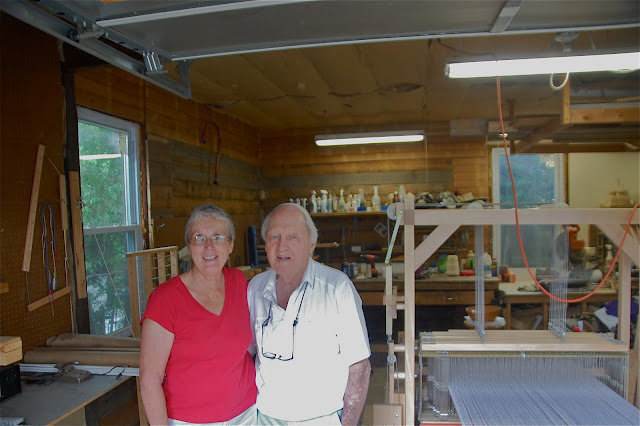 I'm not sure when this loom is in my future, but I'm sure that it is. 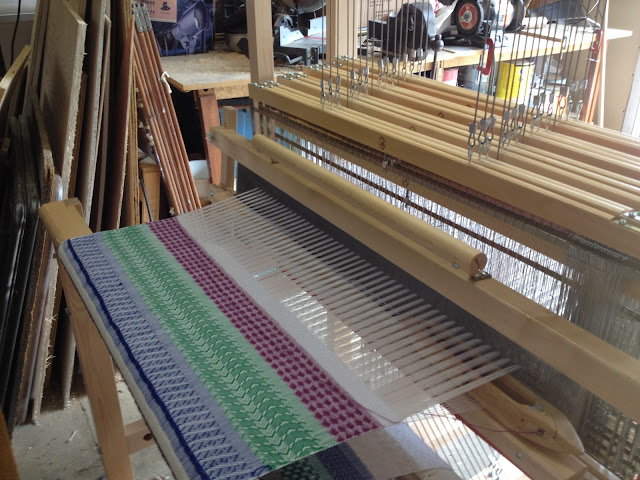 I thought it would be noisy, but actually it's really not.  And it's smooth.  And it treadles like a dream.  One treadle to open, and one to close. 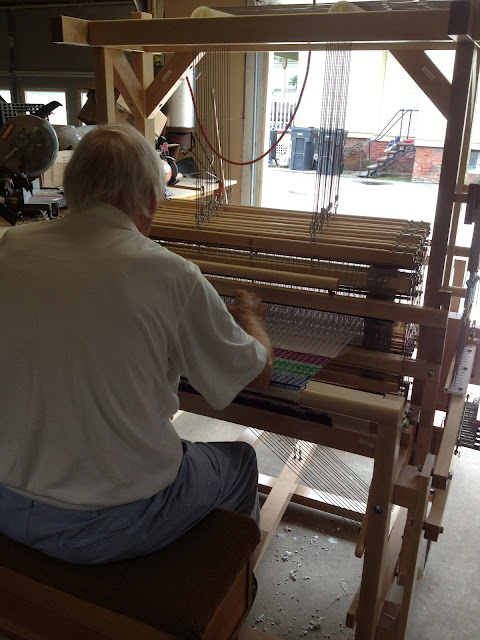 I suppose you could point out that I did not get one bit of work done today, and you would be right.
But I'm ok with that. 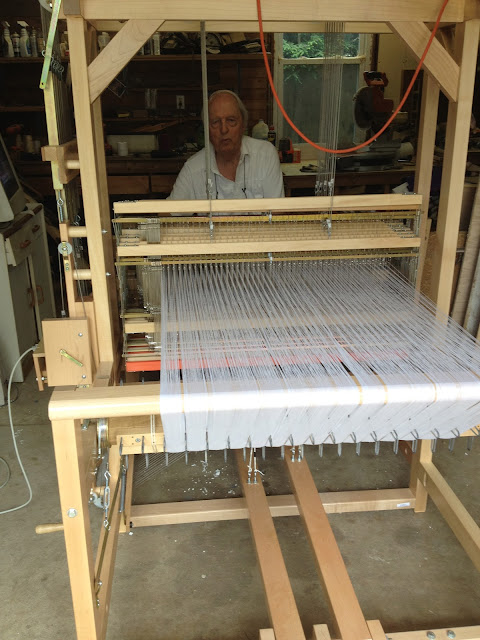 If you never look up, you'll miss the blue sky. 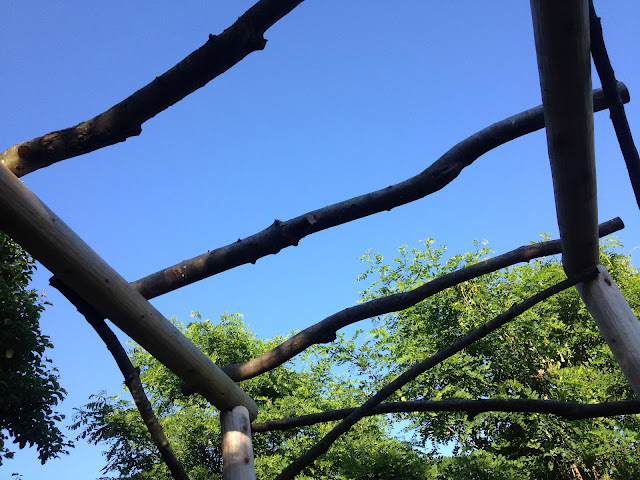 That is so cool. Doin' what he loves. He looks fantastic and that is why. Hugs, Deb

I love my 16 shaft WeaveBird, and Tom was instrumental to my success in getting it working perfectly. Even in Alaska, he has avid fans. I bought it from him, assembled and fine tuned it with his help, and called him when I needed advice. I love the loom SO much, and appreciate Tom just as much!

I have a Weavebird, bought in the fall of 2010, and I absolutely without a doubt love it. I love the loom, and I love not having to get down on the floor to tie up treadles. I still have portable looms with treadles, trying out different ones until I find that perfect workshop loom, but I prefer to use my 'Bird whenever possible

I think you got lots done today...look at how much you learned!...better take advantage of all the time Tom will give you...the days of master trades people are going to be far and few in between.

I'm still loving all the treadling changes with my feet, although I admit I could do without the tie up. I am not at all interested (at least at this point) in having an air compressor do the lifting work for me. It's the opposite of why I weave.

I couldn't get Tom's link to open. Can you check to make sure it's right?

I have never tried the WeaveBird. I have a AVL so I do not know how they compare. They are a breed of their own, with their own problems and their plus's. It is nice not to tie up treadles. I still have a hard time with my Cranbrook.
Glad you are taking some time off maybe it will make HH better.
Louise