I love it when the porch is clean and bright and ready for summer.
Having a weaving weekend involves cleaning and getting ready, so it got done. 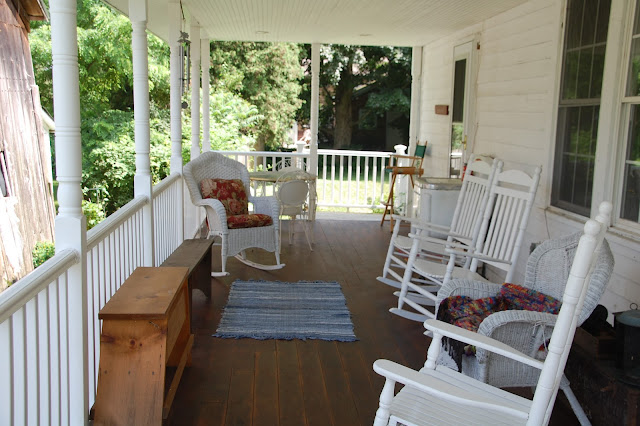 We have always had cats coming up on the porch.  We have fed stray cats since I bought the house.
So there is always a dish of food.
Usually, they eat and run.
Call it bad manners. 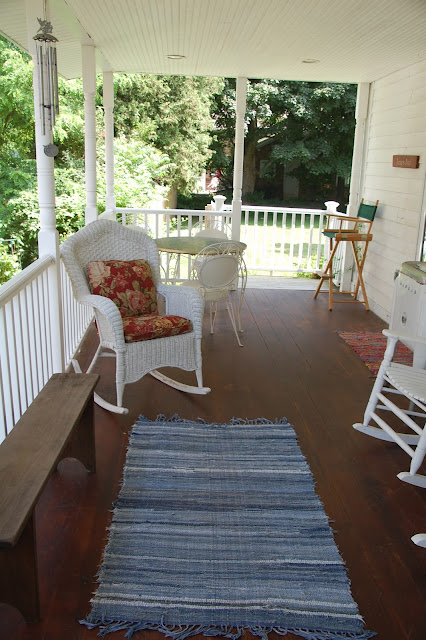 Next and Enough were that way in the beginning.  They got an attitude when they were trapped and whisked off to the vet to be neutered.
Then after a while, they both got over it, and came back to the certainty of a meal and a kind word.

Next has been increasingly friendly over the past several months, until his present state of embarrassingly over the top neediness, while Enough has shown up periodically, when he was hungry. 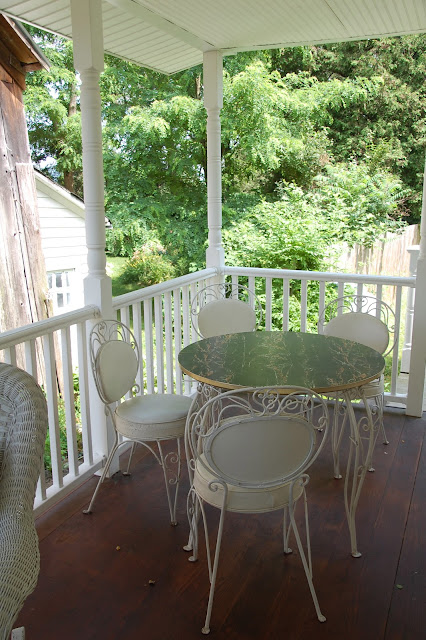 Lately, though, we've been seeing a lot more of Enough, and last week, when Tammy was over, he crossed the line. 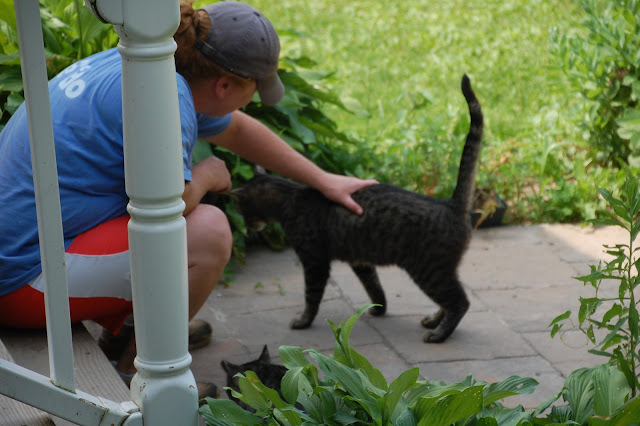 He is much taller than Next, and here he decided that getting petted was kind of nice.
Seems like he was saying to Next......"hmm, so THIS is what you were talking about." 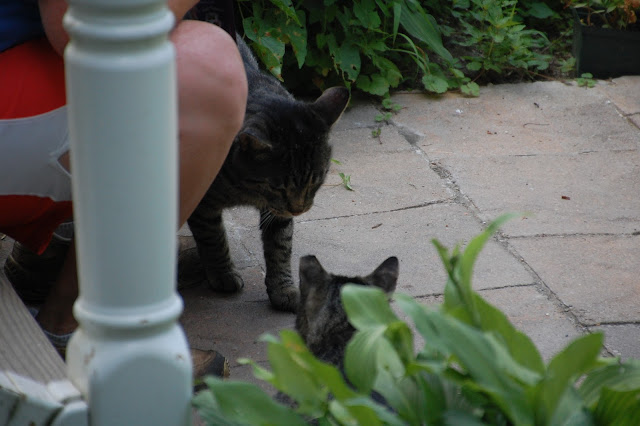 Tammy.....pointing out these yummy treats. 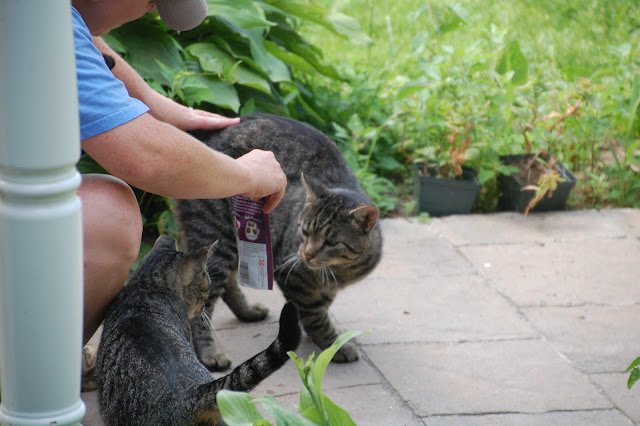 All it took was some love, and some kitty treats. 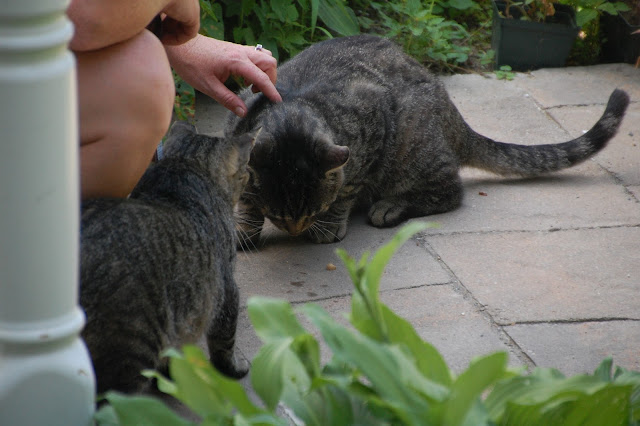 Since then, he has not left the porch, or the yard.  He jumps on your lap if you sit in one of the rockers. 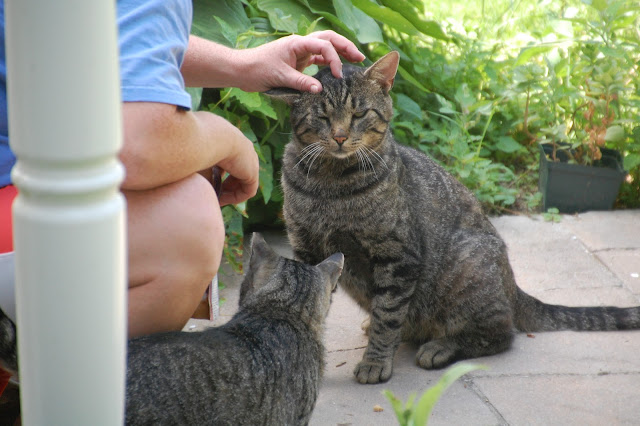 He even let me put flea and tick medicine on him.
Looks like the cat census is up to SIX. 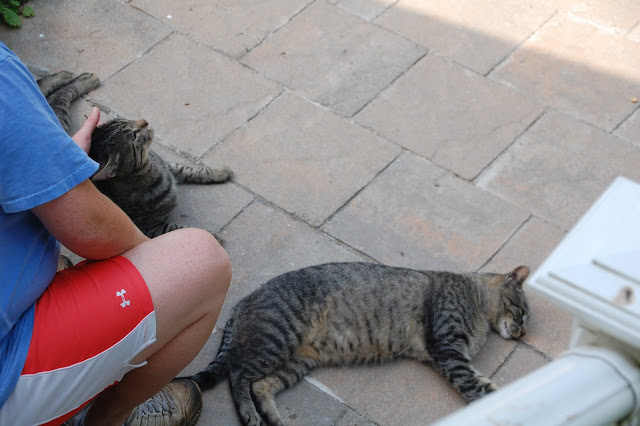 Inside, Sydney has a question.
Do you think I'm too big?
Or could you get bigger stools? 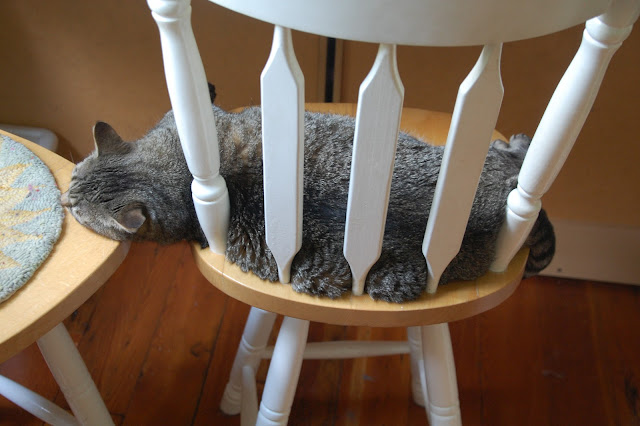 Oh Sydney, what a gal. She just works too hard and builds up a big appetite, hence the widening girth.

Let's hope Next and Enough don't go out and broadcast the information about the treats on the porch. Will the next one be called Plenty?

I think the testosterone has finally settled in Enough and he is calming down and feeling safe. Soon after neutering they all become doilies. Does he have even a clue how lucky he is? I'm just back from feeding some ferals....he's lucky.

Denise, i told Hilary that when another feral cat showed up it would be called Next, then Also, then Enough and then ALREADY!!! well Next came, got fixed and we didn't see him for months.. then Also appeared and got adopted and her name was changed to Smokey... then Next's brother, who we had seen from time to time, started hanging around and he got fixed that would be Enough.. Hilary has dubbed them Next and Nuff, the brothers II. So IF we do get a new one appearing at the Studio, the name is already picked out...L.(Lois)

Huh? I lost track. All I can remember is Sydney. Little Miss wide girth.

Maybe you should put a by line under your blog title, loom and cat whisperer....:)

These kitties know a good cat-friendly home when they see it. Thanks for being that warm, loving shelter for them.

Oh Hilary, what a nice place to sit and relax. It's wonderful.

I love when that happens.

And sid, I sure hope I never have to sit on an airplane next to you.. you're a two-seater, aren't ya.

I wonder if they are litter mates .. they look so much alike .. back from my get-away and struggling to catch up .. hey!!!

Sydney made me laugh. Maybe she should join weight watchers!

I used to live in a house that it seemed like every stray cat came to for love and a meal. I have rarely seen one at this house and my husband is probably glad about that! I get attached and would keep them all!

I love summer time porches! I hope you take time to enjoy yours!
Louise