I know that some of my friends totally get why I got rid of my chickens, and still, others don't quite understand.  They are thinking, 'if you like them so much, how can you get rid of them?'
It's complicated.
I got chicks 8 years ago, for my two oldest grand daughters.  Ill advised probably, because they live a ways away, and didn't get to see them much.  The responsibility was all mine, as I knew it would be, but the joy of seeing them experiencing the raising of chicks was rare.
Then in 2020, I got 24 new chicks, and then for the next 12 weeks, the responsibilities multiplied.  Keeping them safe, keeping them warm, checking their butts daily for sticky butt.
But even when they were grown and integrated with the rest of the flock, there was feeding and watering (carrying water) cleaning the coop, and at least 3 trips a day out to them, to let them out, lock them in, get eggs, and sometimes, more, when a squawking alerted me that maybe something was trying to get in to the chicken yard.
The expense, food, grit, bedding.
Finding homes for all the eggs...........22 a day at the end.
Probably eating more eggs than I normally would, just because there were so many!!
Occasionally beating back the rats, that always reappeared.
Beating a hawk out of the chicken run, with a stick.
And always, always, worrying about them, and occasionally losing the battle, when some predator did manage to evade all the barriers I put up.
In the end, with other stressors in my life, I realized that my friend was right when she said, "you need to lighten your load".
It was time.
The first couple of days, I missed seeing them out there, hearing their conversations.
Then I started revamping the coop, making it into a playhouse.
And as the days went by, I felt this enormous sense of freedom, relief.  A lightened load.
I am glad that I experienced them for 8 years.  I have fond memories, but now, my mind is a little less cluttered, I have less worry, less responsibility.  I think that if we listen to ourselves, we know when it's time for change. 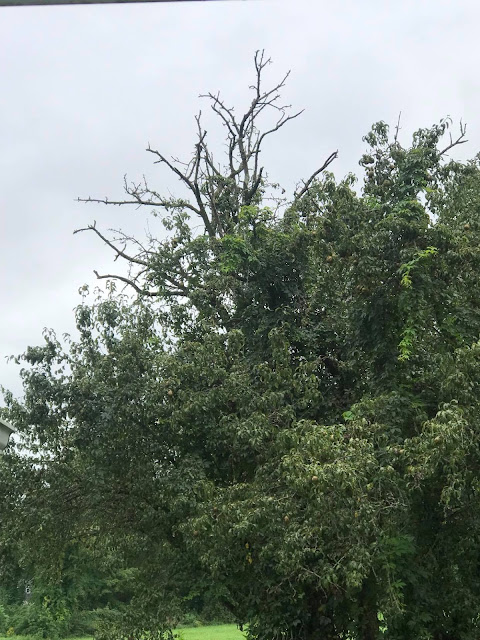 Sitting in the hot tub, there are two treetops that are directly in my vision, an apple tree, and a pear tree.   They have some dead branches sticking up into the sky, and I have sat there and pondered how to get them trimmed, and the get the dead stuff gone.
Then I watched, and realized that those bare branches are the perfect landing place for birds, especially the mourning doves, who are a little bigger, and need more room.  They don't have to bypass the heavy foliage, they can just swoop in and land.  Once again, things are not always the way they appear at first glance.
DH plants way too many tomatoes, that he really doesn't take care of once they start producing.
I've nagged him until he has brought bags of them into the house.  I wash them, cut them up, put them on a pizza tin, drizzle olive oil over them, salt and pepper, and roast at 350 for an hour.  When they cool, I put them in gallon bags in the freezer.
They will be perfect for the weekly soups I make all winter.
Today there were so many, I cooked some down with some onion and garlic, for dinner. 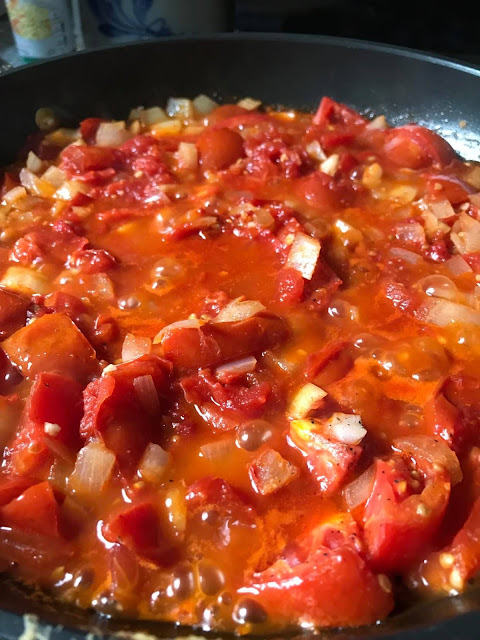 Part of my washer/dryer project involved me moving everything around in my sewing room.
The desk I used to have my sewing machine on was too big and had to go, so I brought down a table from upstairs..........the only problem being that it had a drawer all the way across the front, which made it hard for me to get my legs under it.....and impossible to use the knee apparatus that raises and lowers the presser foot.
So I took the drawer out, sawed off the supporting board, went to Joann's with a coupon, and bought that little rolling drawer unit, for all the minutiae that was in the drawer.
It works, and didn't cost much either. 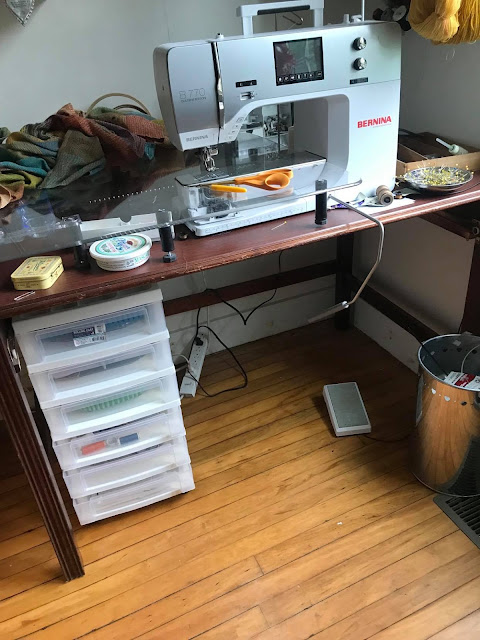 Goldie never gets much mention, but he's a really nice boy....he's lived here for years now, and he seems really happy.
He picks the craziest places to sleep, and this box is his latest. 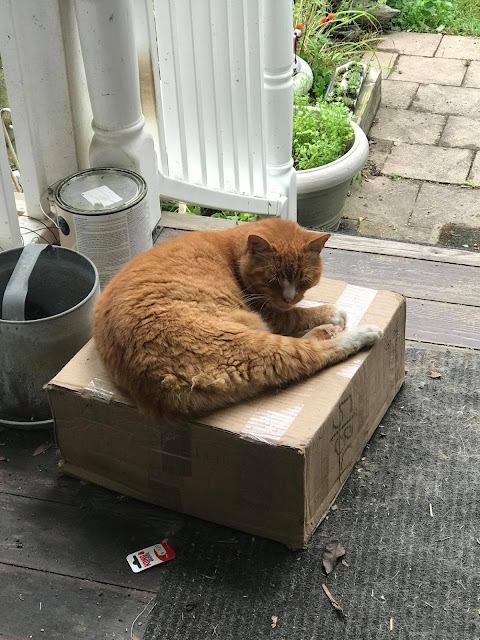 But a chair is always nice, too. 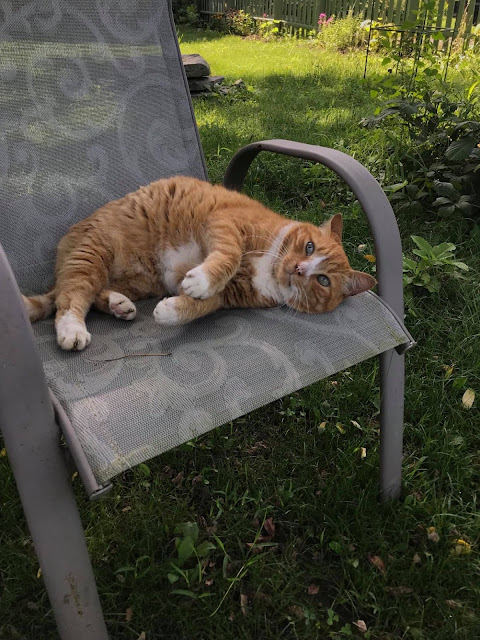 Moving the washer and dryer, has snowballed into other things.......mostly down sizing and reorganizing my kitchen.
There was a cupboard on the wall to the right ......that got emptied and removed........
there was a free standing cupboard under the window, blocking the heat vent, and that also got cleaned out and is gone.
Now I want to swap these two out....put the fridge on the right, and the cupboard on the left near the back door.   Since there is an ice maker in the fridge, that occasionally works, I am going to have to have my plumber come and do it.
That's for another day. 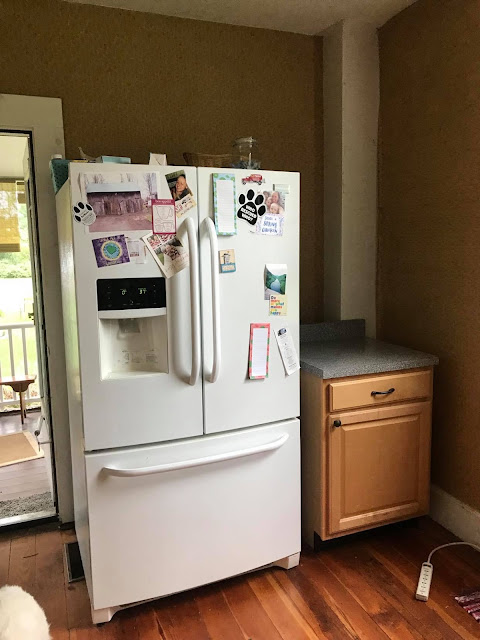 My pantry is not huge, but oh my, it is wonderful.  I can't believe all the stuff I had crammed into the little cupboard space that I had.
This will allow me to have clean lines in the kitchen, without the clutter, and that makes me
very happy. 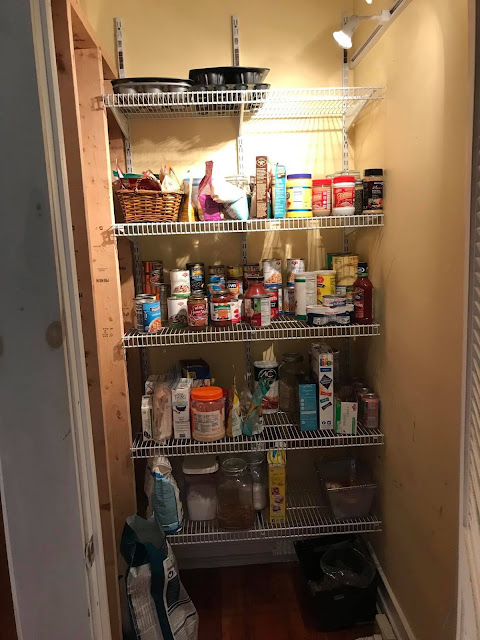 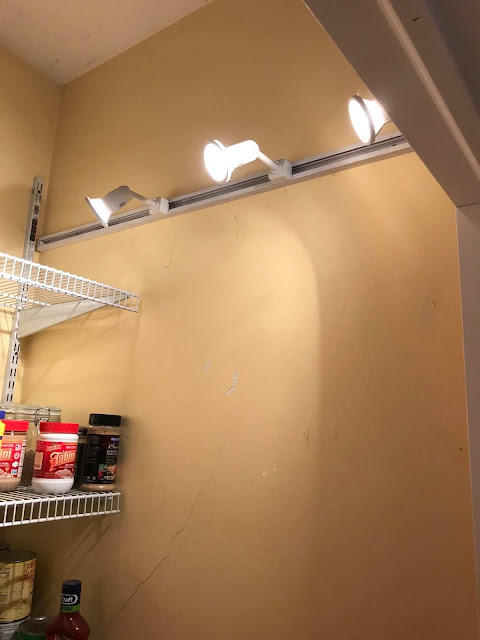 Sometimes I am amazed at how little it takes to make my little world ok.

Sending a big hug to Goldie. Lovely to see him. Sending a big hug to you too and all good wishes for your ongoing patience and persistence with the knee recovery and the home improvements. There is a time for everything and you did chickens but now that time has passed. I so get it. Knowing when to make a change or let something go is what is called wisdom in my book. Take care.

You are an amazingly organized and energetic woman, Hilary, especially since you've told us the knee still hurts 24/7. I'm alwaYs impressed.

As I get older, so many things have had to go by the wayside. My husband and I physically can't do the same things we did 35 years ago when we built our home to heat with wood. I love the smell of a fire burning, how quickly it warms up, the money saved in energy and how pretty it looks, but stacking 20 face cord every Spring and schlepping wood in every day just got too hard. So, we switched to gas and presto, I push a button.
Instead of a big garden, I have a few plants and I go to the farmer's market for veggies.
Hanging clothes on the line was always a biggie for me, but even though both knees and a hip have been replaced, it's hard to carry out the wet clothes, so I just hang the sheets now when I can. So many things it's hard for us to do.

A really nice young couple moved in next door last summer. I see them out in the yard running around, weed whacking, mowing, chasing the dog, etc. and I sometimes feel a little sorry for myself and my restrictions. But, than I think, I had my time and I did all the things I wanted to do. It's their turn now.

When I do feel a pity party coming on, I just say to myself, I don't have to work 12 hours a day in a factory anymore, I don't have to drive in the snow or wind or rain if I don't want to, I can just stay home in my cozy house with hubby and my 4 kitties...and as Martha Stewart always says, "that's a good thing".

Any kind of a pet has work to it--usually daily--no matter how you feel. I can see how there would be freedom in getting rid of the chickens, no matter how much you enjoyed them. But those girls are going to LOVE that playhouse they have now, too.

Your reorganization has been quite productive and spawned even more ideas. That has to feel wonderful!

Yes, sometimes even the dead and dying can provide a lot to the world if you stop to look. ;)

I hope you're getting better and better. :)

Hi there! Haven't written to you before, but want you to know I enjoy your posts. Today's rang home for me because like you, we let our chickens go a couple of years ago. I hear everything you went through-- the never-ending work, the cleaning, feeding, tending, but I especially understand the constant fear about their well-being! They become true pets, so it's heartbreaking when we'd lose one despite the barriers we'd put up to keep the predators out. When my daughter, who convinced us we needed chickens and mostly took care of them, went to college, I knew it was time for "the girls" to go too. They went off to a lovely home, where I know they're well cared for. I miss their squawking and visits when we hung around the backyard, but I do not in any way miss the constant worry for them, especially in the middle of the night!

Thanks for keeping on with your blog. We really appreciate it! Good luck with that knee!

I got chickens in 2020 too. 10 white ones. they are good layers but next year I think we will try and get rid of them. My husband ( 71) this month does all the 'cheicken work and it's gotten to be a bit much. So not now, but later.