I do seem to be on a roll, posting more often.

I can't actually explain why.

Since adopting Willie last week, I have had moments when I asked myself if I'd lost my mind.
Naya is so easy, and quiet, and sweet.  Not a problem in the world.
Willie........ah, not so much.

He was running loose in the next small town, owned by a family of yahoos that had a bunch of un-neutered, free ranging dogs.  He was picked up by animal control, and languished at the vet's boarding facility 5 miles from me, for about 3 months.  His owners were called and called, but they never came for him.
So consequently, he has a few issues.

Let's start with the positives:

He's a total lovebug.  He loves everyone.
He's great with Naya....they play they follow each other around, they sleep.  They eat side by side, and exchange bowls....no aggression, no fighting, nada.
He loves kids, and he is a prince around them.
He is mostly ok with cats, except when he tries to get Sydney to play, which is not acceptable to her.

He is house trained, at least he has not had even one accident.

But the other day, I walked the two of them on the bike path.   He pulled constantly.  I stopped every 10 ft, trying to show him that when he pulled, we didn't walk.  It was torturous.   He was reactive to everything.....walkers, bikers, just everything.  Then a man came along with two small dogs.
Willie was on his hind legs, 46 lbs of crazy.   I held on, he flipped over on his back, got up and went at it again.
Hard to understand his behavior, because he is not aggressive with other dogs at all......so I guess this is just fear aggression.
Whatever it is, by the end of the walk, even though it was cool out, I was sweating.

My neck! my knees! my back!  I felt like I had been in a wrestling match, and I surely did not do well.

So I went to the local pet store, had a long conversation with one of their employees, who is by the way a dog trainer, and I bought a prong collar.  I know that a lot of people say that they aren't good, but I have used them before, on two pit bulls, and had great success.
And, I was desperate.
I want Willie to have a home, and a good life, but I can't have him yanking me around, with my fused neck.  It has to change.

So yesterday morning, L took Naya, and I took Willie, with the prong collar on.

From the moment we got out of the car, he didn't pull.  He felt it on his neck, turned and looked at me, and he got it.

Here he is, and you can see how the leash is slack.  We had a nice walk, and he didn't pull once.

Well, until the GOOSE walked out to the road.  He did get a little upset about that.
But even so, I was able to control him, and keep him in one place.

I feel very relieved about the whole thing. 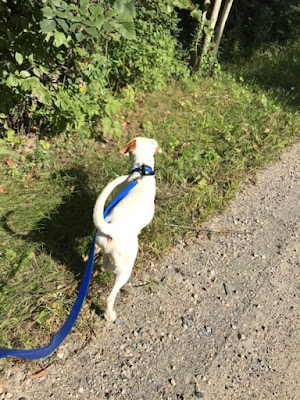 Now the only issue is his separation anxiety when you walk out the door.
But hey, one problem at a time.

The other day, I had a sewing day.   The finished woven pieces were calling to me, so I worked
on finishing them. 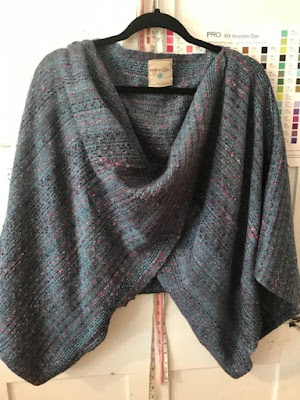 A Mickey cape with wool inlays. 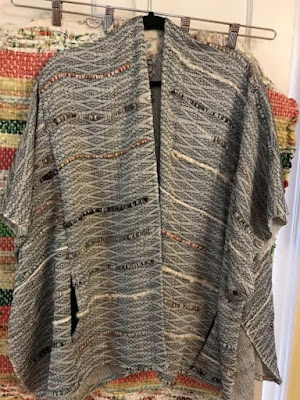 A ruana in mercerized cotton, with fringe. 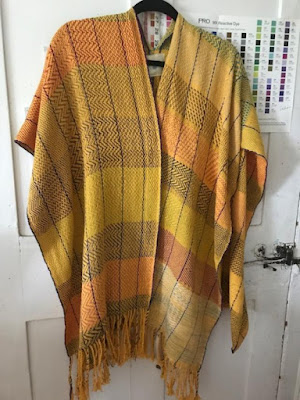 And another Micky cape, in cotton and rose yarn, hand dyed. 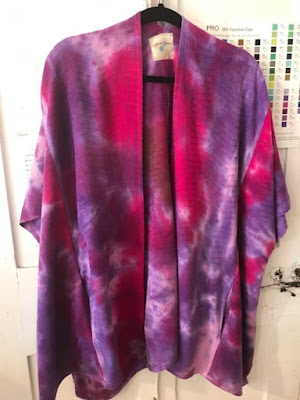 It was a very productive day.

Yesterday, I put a warp on the David, sick of seeing it sitting there bare. 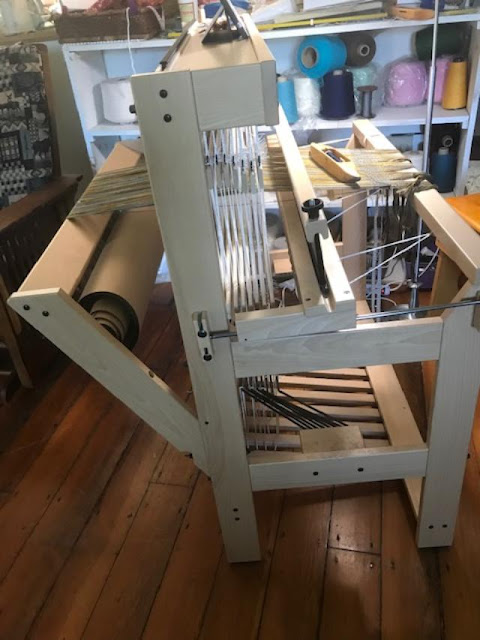 I really love that loom.

I tried several wefts, until I finally found one that moved me. 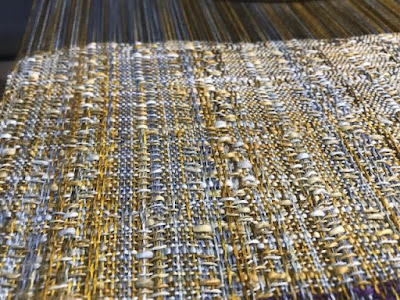 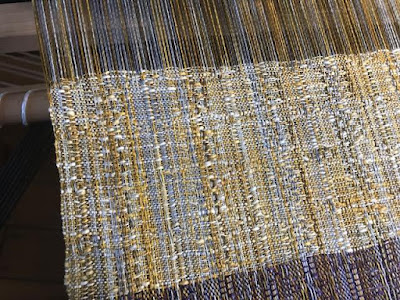 And I'm still loving it. 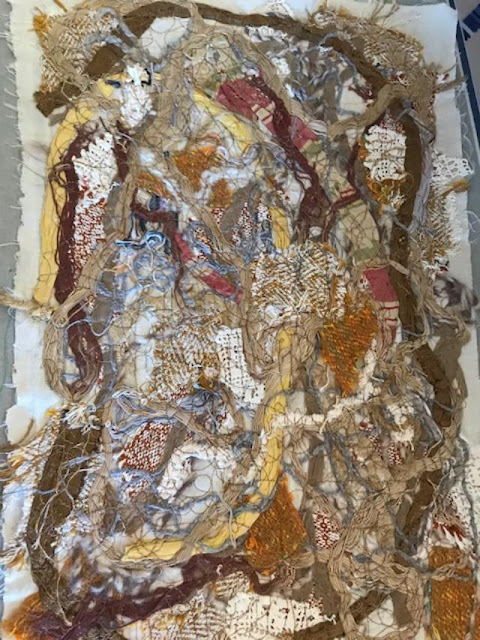 Cooler weather has made me more ambitious about planning weaving projects.
I love the fall, and I'm looking forward to it.

I was upstairs winding a warp, and when I was done, these two were on the stairs waiting for me

It's nice to be loved. 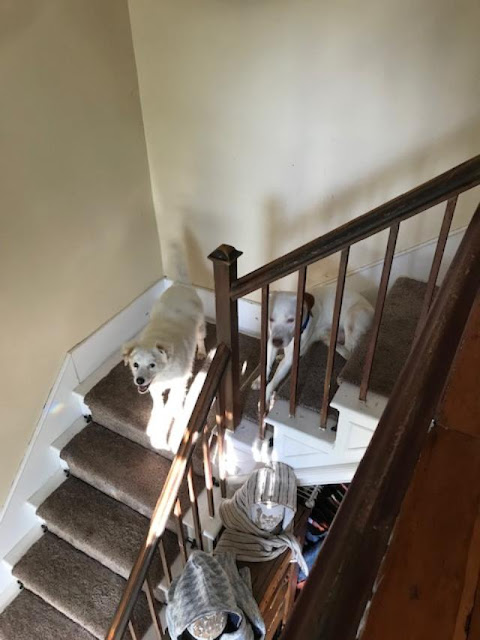 The Weaver of Grass said...

I am so pleased to see that things are working with him. Dogs that have not been loved must feel it so much. When I think that my Tess was born into a loving household and I have had her since she was six weeks old. She is now almost twelve and has been loved every single minute. Glad you have persevered.

Love your weavings!! The new one should be awesome too!

Glad the prong collar is working for you. Did you ever try a gentle leader? Maybe that's a next step for Willie?

LOVE all your productivity!

adjusting to a new life Willie is for sure trying to be the dog you want .. he just needs a little time to learn how ... i have no doubt in a month or two he will be totally part of your 'pack' .. playing with Sidney aside