I admit I have been overthinking this new dog in my house.

On the one hand, he is the sweetest thing, and I'm already falling in love with him, and on the other hand, he has issues.
There is a little voice in my head saying "WTF?   you did not need a dog with issues."

But then today, on the way to spend the day with my youngest daughter and her two little ones, I had a long talk with myself.

Earlier in the week, I had decided to take both Naya and Willie to a local doggie day care.  I had heard very good things about it, and figured that it was something that both they, and I, needed.  So even though I was very nervous about it, I signed them up.

I dropped them off at 8:30 a.m., and felt like the worst doggie mother in the world, talk about guilt;
I picked up bagels, and headed down the highway.
And I said to myself, we need to talk. 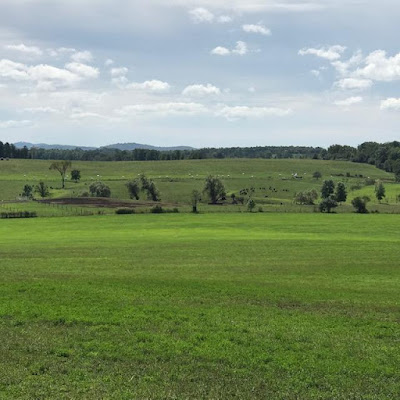 The upshot was this:

I can not send him away, to another kennel, or to someone who will crate him all day while they work.
Truth is:   no one is going to give him as good a life as I will.  O.K., he has some issues.
We've worked out the walking issue, now we just have to figure out how to address his separation anxiety.
This morning, he busted out the screen on the screen porch, when I had the audacity to leave him to feed the chickens. 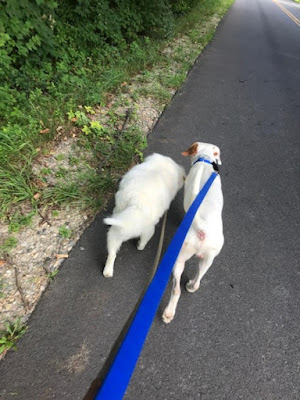 That being said, he's only been here a week.  Good God, give the boy a break.

So right then, I committed myself to figuring out how to acclimate him to the crate, and reassure him that I was not leaving him, that he was safe, at last, safe.

I called the doggie day care about noon, and they said everything was fine.  I was worried.

But when I picked them up at 4:30, and got the report that they were both fine all day, and welcome back anytime.........I was somewhat relieved.
In the car, they both promptly fell asleep.  Willie actually snored with his head on the console.

We walked in the house, I fed them both, they were ravenous.  Then something occurred to me, and I walked him over and nudged him in his crate. 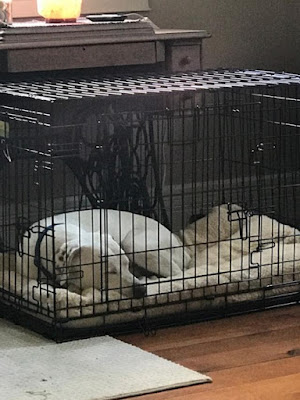 He is still there, asleep, 40 minutes later.  When he wakes up, I will let him out, but right now he appears comatose.
Crating him when we leave will solve a HUGE problem. 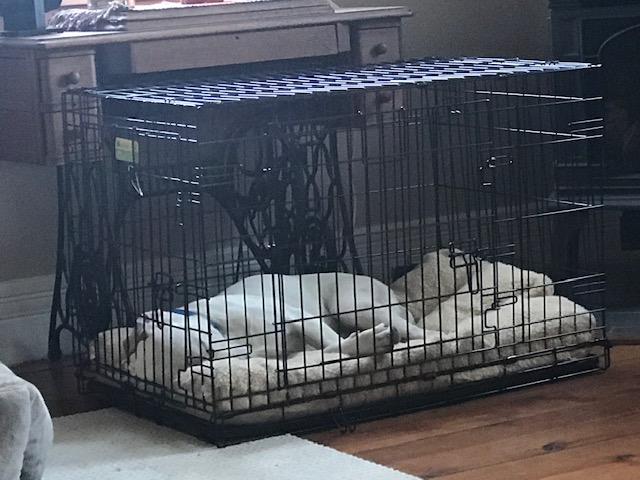 So apparently, talking to yourself can be a good thing.
Who knew???
I think sometimes I just work myself up for no reason.  Or maybe I have reasons, but they have nothing to do with the problem at hand.

Anyway, I read this on FB, and it was so appropriate. 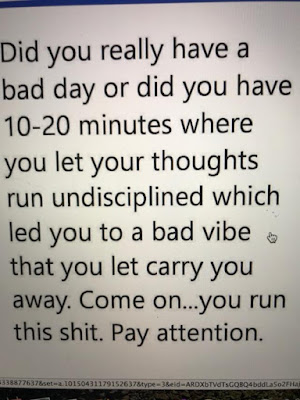 This so resonated with me. Thank you.

Hey there - I usually read, but very rarely comment, but here I am. We took in a rescue 3 years ago and she was a mess. Yes, to a prong collar (we've had one for every dog - German Shepherds who needed that reminder). Zoe was the first we ever had to worry about separation anxiety. After months of craziness, we decided to go with the Distraction Noodle. You can buy these chew toys that let have grooves in them (we had one for our last dog, she never used it)...we plug treats into the grooves and then, as we leave, tell her to 'keep house'. She is so interested in getting the cookies out of the toy that she doesn't even bother with us leaving. It has worked wonders. Now, 3 years later, when we say where's your noodle, she is so excited. And we simply leave the house.
I am so excited that you have another rescue dog - both dogs are so very lucky to have found you for their forever home <3

He will come around when he feels safe. It took 3 months with our last rescue golden, he had separation anxiety issues and I was home much of the time so he wasn't left alone all day. We were told he was crate trained, nope, he was pulling those heavy bars apart with his teeth, he'd set off the alarm system with his barks. We finally let him have the run of most of the house when going out and I'd come home to find everything from the top floor on the stairs, not destroyed, just on the stairs - pillows, books, magazines, whatever he found. After a few months he finally realized we would always come back for him and he turned out to be the most wonderful dog ever.....very sadly he died this past April....but we'll be ready for another in the near future..... The best to you with getting through this adjustment period.

Thanks for that little, inspirational conclusion.

Boy, this post spoke to me as I also can turn ten minutes of circular thinking into a bad day with a snap. So I will write that piece of writing down to remind myself that ten minutes a bad day doesn't make. As for walking Willie, maybe this will help. When I was having some real painful arthritis issues last winter, walking my happy, spirited, nose led beagle was difficult because she kept pulling me and it became too painful to walk her which was concerning to me, for her and for me. So off to the pet supply store and they recommended a Walk Right! front-connect padded harness. They fitted her and we have been walking ever since. Also my girl goes into her crate all the time and settles. Willie is still settling in but he has found the best home and people. Thank you for your authenticity. I always come away with a nugget of truth.

My shepherd voluntarily goes in her crate when she knows I am leaving the house. I think she feels more secure when I am gone. I started putting her in the crate when I came home one day to water covering the mud room floor. She had played with the water in two bowls I left for them. Now that she has matured, I can leave her out, but I come home to find she has gone in and gone to sleep while I am gone.
I think you are right by giving him time with you. He just needs to know that you will not abandon him and that you are a safe place to be.

so we adopted a new young cat - he's about 14 months old and darling BUT our (now middle 'child') youngest Annie still has issues with him after over a month which seems like a long time for me but in fact is not long at all ... i dont know if Annie will ever let Sid be a complete part of our 'pack' but right now i would like her to just calm down and not growl when Sid comes into the living room ... earlier this week, Tuesday, my husband had outpatient surgery we were out of the apartment from 1:30-9:30PM when we got home Sid was not himself as there was no fur or upset furniture i guess there wasnt a big fight .. but he was so nervous so hesitant so unlike himself ... i think he thought he was abandoned .. its taken him til this morning (Sunday) to come out of the bedroom and reassume his place in the hallway where he can see whats going on and keep out of Annie's way ...