My daughter brought me a brand new puzzle.  Apparently, no one at her house was interested.

It was a challenge, but probably good for my brain.

But now what?  Tear it apart and pass it along?  Or seal it and use it
on some table top somewhere in the house? 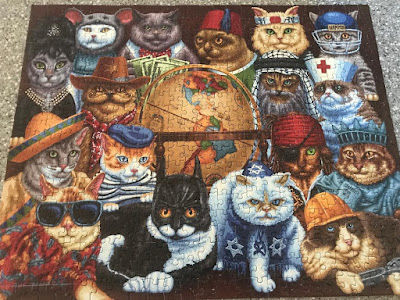 Along with the humidity, that is miserable, there are some things about summer that I do love.


And the chickens love what's left. 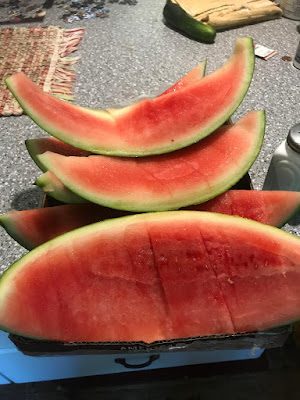 Another thing is gazpacho.   I used to think that cold soup sounded ridiculous, until I tried it.
It's an explosion of freshness and summer in your mouth.
I love it.

This is Ina Garten's recipe.
I don't own a food processor, I've given away every one I've ever had, so I use the Kitchen Aid blender that I got free with points from my credit card.
It works just fine. 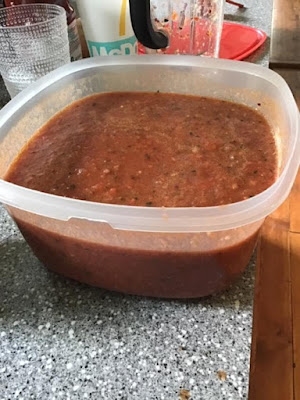 In the studio, I've arrived.

That's what I call it.

You wind the warp, you dye it, you put it on the loom, thread it, sley the reed,
dye the weft, pick out your draft, and you're ready.

You're not really sure how it will turn out, so when it ends up like this.....
well, you've arrived. 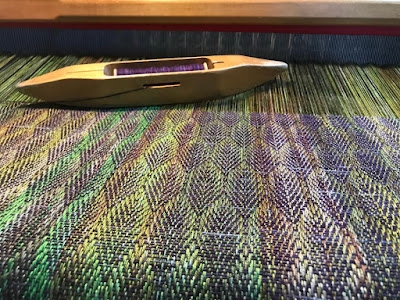 Every morning I plug in my festive little light string, over my retail display.
I just bought this string of little globe lights, after my last string died.

It makes me happy to look at them.
That's just enough reason to do it. 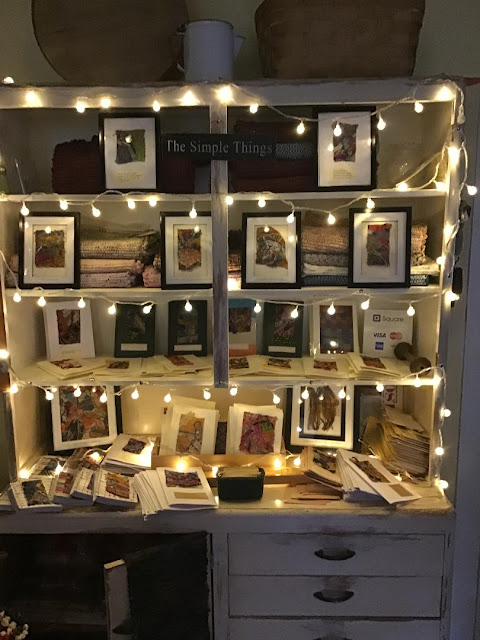 Yesterday we went to the vet. Naya had to have her heart worm retest.

We were also there picking up our new family member, Willie, a stray who
has been kenneled at the vet's for 3 months now. 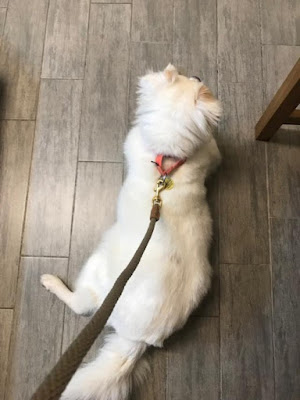 He has the exact same brown spots on his ears as she does.
He is about the same age, maybe a year younger. 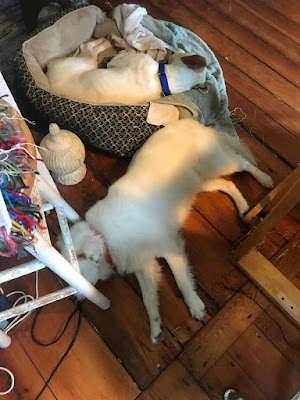 After the initial 20 runs around the dog yard, they eventually settled down. 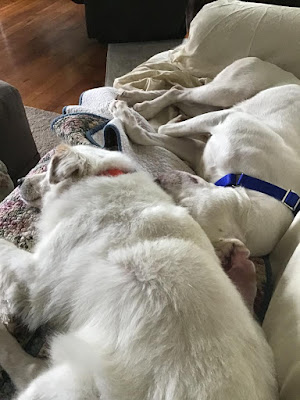 He likes to be touching someone at all times. 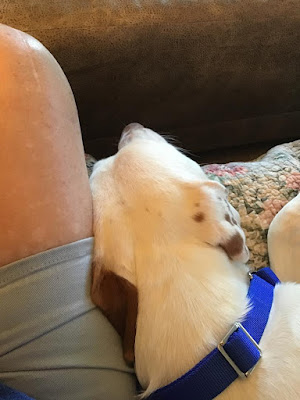 I know that Naya is going to be a bit jealous for awhile.

But she does like him, and they do get along well.

Everyone just has to adjust.
And we will. 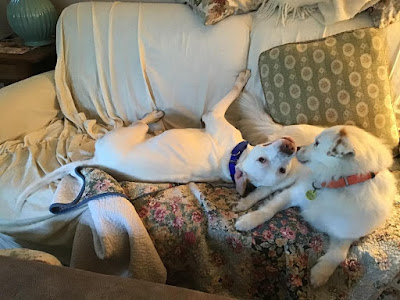 I am so glad I didn't go out and buy a new couch, like I was considering a month ago.

Someone likes to make a huge mess. 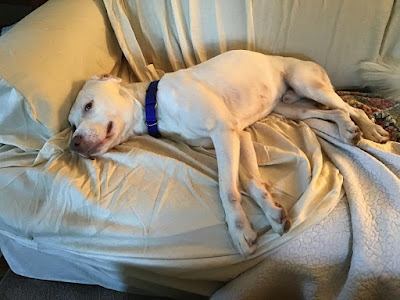 He is thin, but hopefully will gain a few pounds 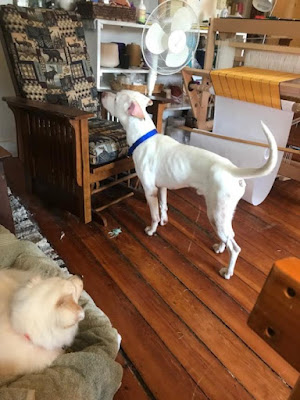 We just went for our first walk........just up a back road near the house....because Willie has never been on a walk in his life.
So it was an interesting time.   He pulled, he yanked, he about took me off my feet.

Little voice in my head saying, "Are you serious?  Getting a dog this young and strong at your age?

What were you thinking?"

Then I remember, that first month with Naya.  She was horrible on a leash, had no clue at all what I wanted.
So I told myself to calm the hell down.  Take it one day, one walk at a time.

It would be easier if I had a walking companion, one dog each, but for the most part, I'm going to
have to do that myself.

Which, in the scheme of my life, with DH ailing, is what I do every day, all day, anyway.

By the end of the walk, he was actually trying to keep pace with Naya, who is a good influence on him.
I may, however, have to get him an EZ Walk harness.  We'll see.

Bottom line, he is saved.

I will give him as good a life as possible.

Score one for all that's good.

i am SO happy to read this ... hooray for Naya and Willie ... boys are messy .. our new ginger boy is Sid and he unmakes the bed almost every day ... he and Jack are getting along, he's young and Jack , our eldest cat, is teaching him his manners with an occasional 'hiss' which Sid mostly ignores .. and now that they're friends (we Sid on Father's Day) poor Annie is more upset but now she's not growling she's coming for pets and cuddles to be reassured she's still loved .. i love that Willie likes contact with people or Naya .. he's probably needing the reassurance he's got a home and people who care .. xo

You are an amazing woman, Hilary! I had considered two dogs when I moved to a place with a fenced yard, but Jack has made it clear he wants to be an only child. So he is.

Well done for taking on your rescue dog. It looks like he is happy to be in a home again, but has a bit to learn about not pulling on walks etc. It must all be so strange for him.

I love your little string of lights. I have some lamps with LED lights in at points around my kitchen and on gloomy afternoons, I put them on and they cheer me up.

I love the leafy pattern of your weaving. So pretty.

Good for you. Our first dog taught out second dog everything. She was a good learner.

Very kind to take him in. And what's on the loom is just beautiful!

Yay!!! He's beautiful, what does he think of the cats?

You have a wonderful heart!

Good for you and good for Willie. I know he is going to have a great life! Marcia

They are so sweet!