The surgery is slipping into its place in history, and things are getting back to what is normal, for us.

I am doing more things that I love to do, like making soup.
This one is quinoa pesto vegetable.   I saw it on Two Peas and Their Pod blog, theirs was quinoa vegetable soup,and then of course, I messed with it, and it became something with a whole new twist.
But I had this half container of kale pesto, well, you know how that goes.

I liked it a lot, and I think you could use any veggies you wanted.  And anything with pesto is ok in my book. 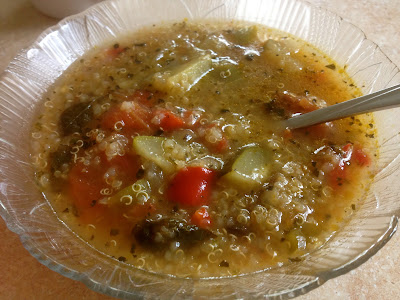 L, the cat hater, has finished with the "cat house" for the boys outside.  You remember, Nuff (Enough) and Nexxie (Next), who came to the studio as strays, who were found a NICE home a few miles away, then left and came BACK to the studio, where they have now taken up permanent residence?


First, she dragged this wooden box down from the attic. She painted it white.

You can see it has 4 windows, and a door with a flap. 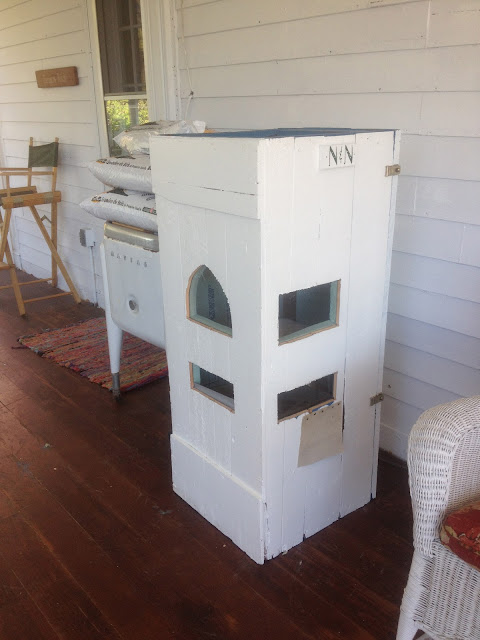 Only a real cat HATER would put their initials on their house.  Just sayin. 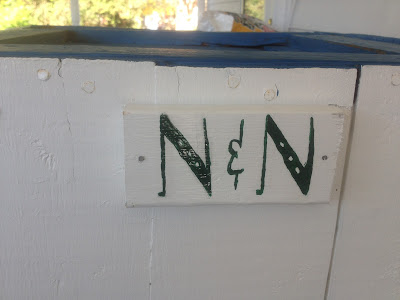 The whole thing is insulated with the sheets of blue insulating board. 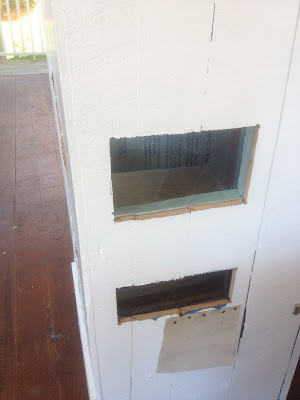 And there is a back door, because no cat will take up residence in it without an escape route.
The cord you see is for the heating pad. 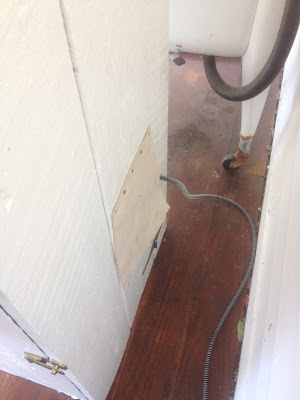 Yes, you heard it right.....there is a cat heating pad, it brings the cat's body up to its proper temperature.
They love it.
It even has a little "upstairs balcony".

My question, which has so far been ignored, is what would she have built them if she actually LIKED them?????  I can't even imagine. 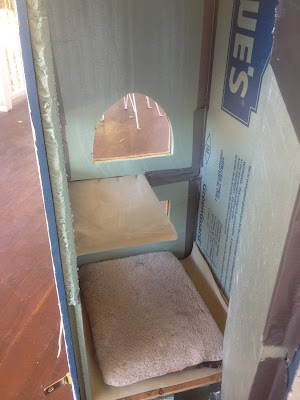 I have been putting a warp on the Schacht, for some ruanas.
It took me twice as long as usual, but that's ok.  I'm a work in progress.
Today I wove, and for the first time, it felt right. 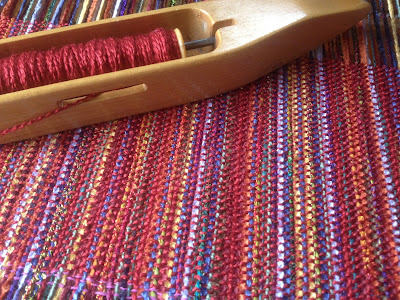 I was loving every minute of it, but after a while, I had to admit that enough was enough.  The old neck was complaining, and the new me listened.
Nothing wrong with half days, nothing wrong with a nap on the couch with the heating pad and Roy.
Nothing at all.
Just a new normal.  That's all. 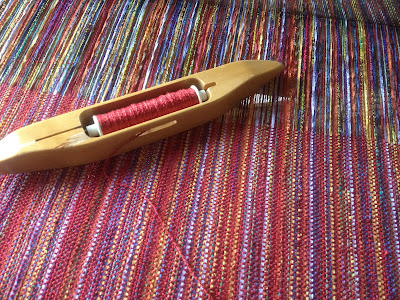 That darn L. Her treatment of the cats is....well, there are no words:-)

Wow what a great cat house! Now the trick: will they go in it and like it? Glad you are listening to your body, you will heal faster by taking it slow now. You certainly havent lost any of your weaving skills, thats beautiful. Cheers!

I like the sound of your new normal. As far as L goes, she just needs to throw up her arms just like the rest of us have and admit to being owned by two (or more) fabulous felines.
Btw-this cat-house of the kings that she has so reluctantly built could not come at a better time. I have a lady who is doing the same and needs a little bit of encouragement to get it right. I'll show this to her. Thanks to L. (looking forward to seeing them hunkering down in their house this winter).
hugs, Deb

L the cat hater...she is too funny! So good to see you weave again, Hilary!

I like the "new normal" sentiment; way to go! We should all take a lesson, XOXO

Soup looks yummy.
Now that's a cat house! :)
I like your new normal. You deserve to be extra kind to your newly altered body. I bet Roy loves the new you. ;)

Beautiful post. So glad you quit while you were ahead. And wow on that cat castle built by L. She is amazing, even adding the initials.

If she didn't hate them so much she would have built them a by-golly palace!

Tell her my cats envy N&N.

Lucky cats! And to think Sydney has had to make do with a beaten up old cardboard box...she will be jealous!

Love the cat condo and the weaving.

"The old neck was complaining and the new me listened." Love it! Great home for N&N! Yay for L.

I just love that cat house. I am so pleased that N&N are being treated like the royalty they are! And the weaving is beautiful, Hilary. So glad you are sharing all this... you do have quite a following, after all! :-)


L - your cat hate is quite palpable now.

Love the house, and the apparent turn of the heart :-)

beautiful colors in that weave, Hilary, love it - very cheery.

L intense dislike of cats is obvious .. she needs to stop being so mean

your new normal is wonderful ... and there's another new Helen & Margaret waiting to be shared over on FB

Cat's need a cat house? Hmm. Pretty interesting. It doesn't look like one though. It looks like a fire place to me. lol
Home Loan Kwinana

I have been bugging my hubby to make a cat condo for my sweet girl, Miss Irish. This is perfect! My infant sweater pattern arrived today from your cacklinhens : ) Yay Hilary!

L will soon come out of the closet where she nuzzles the cats when you're not looking.

She's quite a talent.. and very good-hearted. Those felines have a lot of love around your place.

So glad you are back to weaving! What is that warp you are using? Love tne colors!