Two weeks today, although it's hard to think about my measly problem, on the anniversary of such a day.
And hard to believe that such horror could have happened on a beautiful, sunny, September day in this country.

Yesterday, I did too much, and last night I paid for it.  Mostly I am bothered with the muscle spasms in my neck, that force me to the couch to rest.  It quite amazes me, how 'little' can be 'too much'.
But then on the other hand, I guess I am amazed at how well I have done, given the nature of the surgery.
So today, Roy and I are laying low.
Do you have any idea how hard that is for me?
Do you have any idea how EASY that is for Roy?
Ha!

I have to tell you a funny story.

My middle daughter has a hectic life, what with a job, two busy children, and being a single Mom.  So often she would text me, or email me, when things were particularly tough, and say FML, which means   "eff my life".
We would laugh then, when my mother would be driving me nuts, and I would text HER, with FML.  It was a little joke between us, that sometimes life is not easy, and the best way to get through it is to joke about it, and plod on.
Middle daughter has received my workaholic/busy/neverstopforlong gene.  Poor girl.

So on the night before surgery, over dinner, my "last real meal" for awhile, we chatted, and laughed, and tried to deflect the fear we both had about what was coming.
It was a GREAT meal.  Neither of us eat meat, so it was a joint effort to find somewhere to eat that pleased us.
I was looking worn out, headache had been slamming me with a 9 for a whole month. 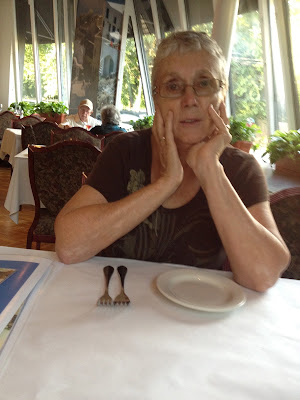 The restaurant was a lovely, bright place, and we had a glass of wine.   Hey, why not?
One last hurrah before the guillotine.
Kind of.

I told my daughter she was the only person under age 50 in the whole place. 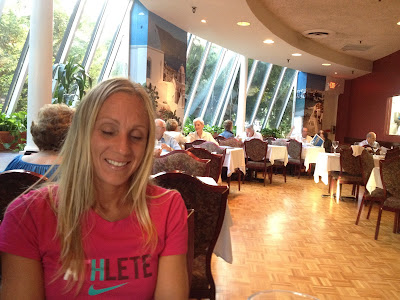 I think mine was called the "energy platter".......hummus, falafel, and other wonderful Mediterranean food.
The manager came over, smiling, and asked us if we were driving.  We said, no, we were walking, and he refilled our glasses. 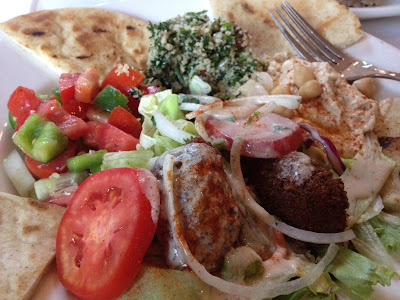 So back to the story.  I told daughter #2 that when I woke up from my surgery, I would say "FML", to prove that my mind was still intact.
If not, well, I was in trouble.

So in the recovery room, with daughter #1 and #2 hovering over me,  I allegedly came to, and whispered to her, "FML".
She started to cry, whereupon daughter #1 became all concerned, asking what was wrong.
When it was explained, they both laughed and cried together.

I remember nothing of this.  Don't remember thinking it, saying it, none of it.  But see, in my mind, which was still working ok, thank you GOD, I knew what I had to do, to put them at ease.

So while I am taking it easier today, I am reminding myself of all that I have to be thankful for.
Having my faculties, being able to walk and talk and function on my own.
Having family and friends who hold me up when I need it, in spite of myself.

Getting better, one day at a time.

You did look tired, Hilary. All that is behind you now, and you are healing up, one day at a time. I love that you have retained your sense of humor through all these trials and tribulations. And thank you for taking the time to write a post! :-)

It's really crazy this internet thing, were a person can fall in love with a family that they never met. I have done just that. You and your family have touched me in ways I didn't think possible. I am so glad that you're doing well even with your ups and downs. Know that my thoughts are with you as your travel this new road with a family that obviously loves you so much. Thank goodness you have Roy too! We can never underestimate the healing power of pets.

Great story! Your daughter had to have felt completely relieved too! One day at a time now... one day.... it's okay to sit and do nothing for a while. :-))

Oh my goodness, I'm crying now and I just put on my makeup for the cat-clients..hahaha! I am so happy to hear all of this. Daughters are the biggest blessing for all our hard work. Give them all a hug for me and here's one for you. (((((HUG))))) Deb

This reminds me of the picture taken at Chuy's in Houston, Tx...the night before I went into The Methodist Hospital/Baylor for an embolization of an aneurysm....my son, DIL, BFF and some of son's friends and I all smiling like we do not have a care in the world. I treasure that picture. It reminds me of the before - and the the after is so much more beautiful.

It sounds like your daughters are such wonderful women. You are fortunate to have a loving family and a loyal dog who is exactly what you need at your side. I am so happy you are healing and doing better each day.

I don't know why, maybe it's a real honest to God relief that you are okay, maybe it's the fact that you are as close with your daughters as I am with mine and I GET it, but your story made me cry...really cry. I can't stop. I am so very happy for you!

its hard to slow down when you've always been going full tilt .. even through the 9-10 months of HH you were doing full speed ahead so now you need to embrace this period of slow down and try to enjoy it .. in another month or two you can step down on the accelerator again and zoom back into life .. better than ever!!!! hugs ..

So good to hear from you, Hilary. Loved the story. Love to hear that you are getting better, one day at a time. So much to look forward to as you heal and move away from the days of HH pounding you. Let Roy Boy be your example--he knows how to have a good time relaxing. Hugs and best wishes.

I know so well how hard it is to slow down and listen to your body. Your post brings tears to my eyes because you share with us how precious life is and how quickly it could have been taken away. On today and always, everyone should be reflecting on that. XOXO

I am so thankful you keep sharing with your Blog family. Your daughters have been amazing. And yes, you have so much to be thankful for. We have a mighty God, and sometimes he just carries us through these valleys of darkness. You now have a brighter future, and life is once again worth living. You are such a special person.

Your story choked me up and made me smile at the same time. Isn't the brain an amazing thing to remember to say that even though you were still foggy from the surgery drugs?! You have a beautiful family! Have a restful, healing day! :-)

Well, FML! This made me laugh with misty eyes. Yes, life is good. And may it just get better and better. :)

So happy you are getting better, enjoy snuggling with Roy because before you know it you will be running all over the place.

LOLOL... it's a beautiful thing.

FML ... you can rest assured that I will be using this from now on. Thank you for it.

I agree with Suzanne. I am absolutely, totally in love with your family ... riding your highs and lows and caring as if you are my family. You are, in a way. I have a very similar relationship with my youngest daughter. It's a blessing.

Loved that story, Hilary. It's so YOU.

Praying the journey to well continues, with fewer "hard" days.

Great bond you have with your girls! Your daughter is beautiful. I will tell my daughter this story. There is nothing like that mother/daughter friendship...what a blessing!

Wow. I just read some of the older posts. God bless you, and Thank God for the success. FML? No way!

Hello Hillary,
I'm so glad you are healing and have a supportive family and dog! I wonder what the part of your brain that housed the monster feels like now....I know you are feeling other pain, but are you pain-free in your headache area?

So glad you are slowly getting better. IT takes longer than one wants to get over surgery. So be careful and take your time getting better.
Have a great day~! ta ta for now from Iowa:)

I love your story. It made me both laugh and cry. I no longer want to say FML but I certainly have been there and know what you mean.

What a great story. You're amazing.