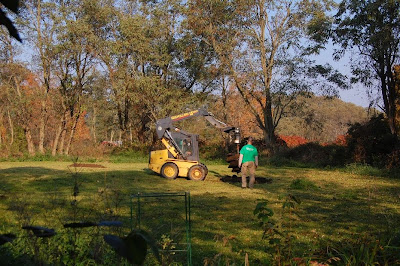 Every year I have things that I want to do, and planting trees was one thing on my list for this year. I had the brush and tall grass cut down a couple of months ago, and I have been mowing it ever since.
Early this morning, they started planting the trees. One clump of silver birch, one red maple, and two sugar maples. 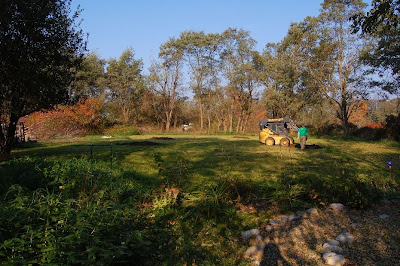 I try to improve the property at the studio, and this was my project for 2009, outside stuff, finishing the labyrinth, clearing more brush, and the trees. 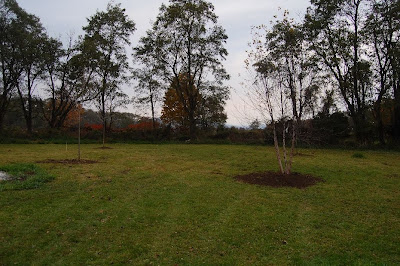 It is good to have goals. In my case, I have lists. Some of them are things to do in the near future. And some of them are things to do this before the year is out.
Five years ago, I met an old acquaintance on the Thruway at an exit near Rochester. She was coming from Pittsburg. We traded looms. Crazy? Probably. But she wanted the loom I had, and I wanted the Cranbrook that she had.
I brought it home, and put it in the attic for storage. Then I bought the house in Kingsbury, and set the Cranbrook up there.
And there it has been for four years. Waiting for me to find the time, and the courage, to tie it up, and start weaving on it.
I wound a warp on it last week, and today I finished threading it. Finally, it is ready to go.
Another thing on my list I can mark done. Pictures later.

I have decided not to stress out about the squirrels. Yeah, they have to be evicted, but I will do it a step at a time. I can decide not to get undone over it.
There are certainly bigger problems in the world than mine. In fact, in the scheme of things, I don't really have much to complain about.
So I am not going to.
When I think about complaining, I will make another list.
Posted by Hilary at 9:07 PM

Some exterminators will charge minimal bucks to come in and set up a Have-a-Hart trap, then return to pick it up with the varmints.

There used to be a product called Squirrel Pruf, a cayenne based powder that can be added to bird seed. Birds can't taste it, squirrels can't stand it. Maybe if the buffet was inedible they'd move on to greener pastures?

It's good to make lists. I'm a listmaker, too. I think the trees will be wonderful.
Your rug arrived today and it's even more beautiful in real life, Hilary! I absolutely love it. And my husband does, too. I'm just so pleased with it.
And the little coasters are fun, too! Thank you so much, my friend.

As a confirmed list-maker, I would be thrilled with the items you have ticked off the list! Good job.

Lists are good. If I dont make a list, or even a notation, I am likely to forget ..