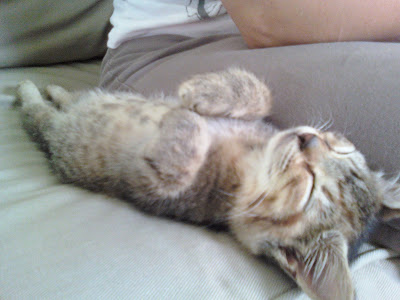 This is Libby Lou. As you can see, she is very, very content. She trusts that the world is a safe place, and that the love given her will continue without interruption. What a place to be. I hope that she is never disappointed. 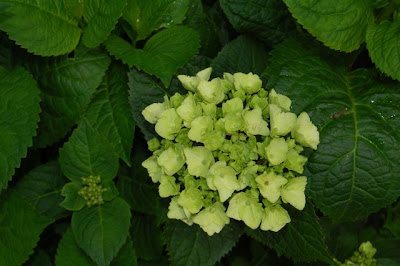 Ah, serenity. I have been missing it these last several weeks. Lots of things going on in my family, and lots of worry and frustration in my head.
But today, I was able to step back and look at it all with a new perspective. I was also able to step back and look at the labyrinth, in its final and finished state.
I hope you like it as much as I do. 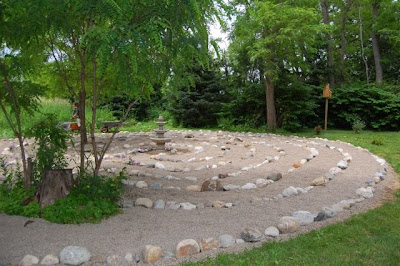 As you know from previous posts, I anguished over what to do with it.....I had originally wanted grass paths, but even mowed, they looked not quite right....and the grass grew up around the rocks, and I could either weed whack all around, or use Roundup, which left lots of brown, unappealing remains.
And somehow, it just looked like a temporary thing, like rocks laid out on the grass. 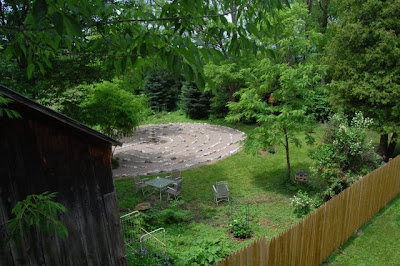 This, though, is the real deal. First, landscaping fabric laid down under the whole affair, then 14 yards of pea stone, by the wheel barrow full, spread out over it all.
No, I did not do this labor intensive task. My helper, Miles, did the hard stuff. I just supervised in between weaving rugs. 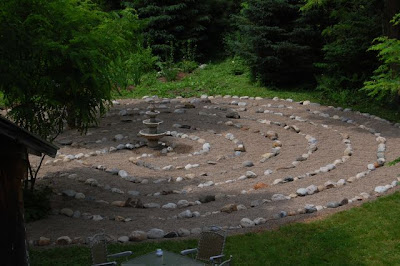 And at the last minute, I decided to put the fountain in the middle, after all. So now, when you walk the labyrinth, you are soothed by the sound of splashing water. 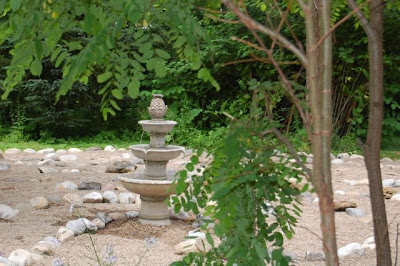 I think I may be getting something right.
Finally.
Posted by Hilary at 5:15 PM

Wow - it's gorgeous!!! I'm amazed at how quickly you pulled that together.

The fountain in the middle seems like a great idea. Enjoy!

I love Libby Lou and wish I could have her, but Charlie is a Feline calicivirus carrier so he gets to remain an only cat. I'm sure he planned it that way - caught the virus on purpose.

Your world is so GREEN - and your little labyrinth looks like *all* of my world. It's a nice contrast though and I love the fountain. I have one of my own which I plug in when sitting on the front porch. I get the sounds of water, birds and wind in the trees - can't get green but I'll go with what I can hear.

I just love it! It looks great now that everything is green.