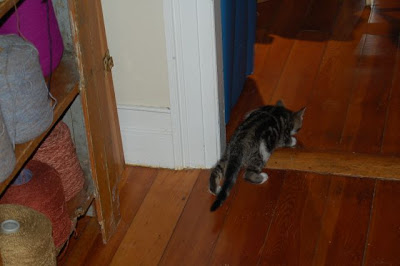 
You might remember that a stray cat had her kittens under the back porch of our house. I caught three of the kittens, and took them to my daughter's, and unfortunately the mother cat took off with the remaining two kittens. A few days later, I caught sight of them in the bushes behind my neighbor's house. My neighbor is living in Florida, and her house is empty. So I fed the cats for a few days, and then put the trap out there again. I caught the fourth kitten within 20 minutes. The momma cat was quite perturbed, and she spent the next day lying in front of the trap, keeping her last baby from going in. Then the next day, they were both gone.
So I took the kitten I caught to the vet, where she was wormed, treated for fleas, given her first distemper shot, and treated for ringworm, which isn't really a worm at all, but just a skin fungus.
Then I brought her to the studio, where I kept her separated from the two adult cats, for her own safety. Over the next couple of days, we tried her out around them, and found that while Kizzy was totally OK with her, Miss Puss was actually quite hateful. Today, I let them mingle, and within 10 minutes, the kitten and Miss Puss were playing, chasing each other, 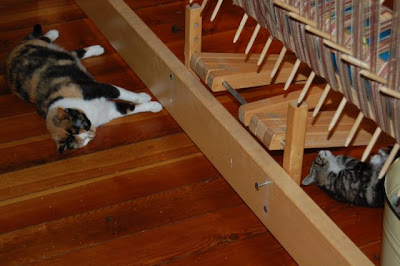 and generally having fun. Not to say that Miss Puss didn't make it absolutely crystal clear that she was the boss....because she did. But she didn't hurt the little one. 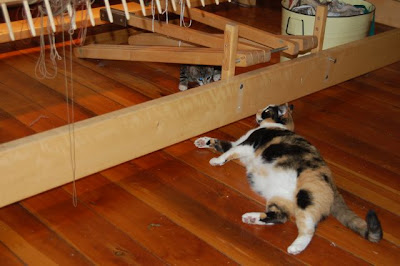 I have been very tempted to keep her, she is wicked cute, and just full of life and joy. But I found a good home for her, with a single guy who has one young cat, and wants another. And I already feel guilty that I don't spend a lot of time with Kizzy and Miss Puss.
The other issue is that I have to feed Kizzy, and thus any other cat that I have, a special food for urinary tract health, it is a prescription food, and costs $49 a bag. So you can see why I don't want too many cats.

Last week I went to my favorite furniture store, Tops in Hudson Falls, NY. I was just looking, and found a computer desk that would fit perfectly in the spot I had for it. I had been previously using a cast off desk with drawers that didn't work, and a file cabinet for the printer. This works so much better. I had quite the mess going on, and couldn't find anything. 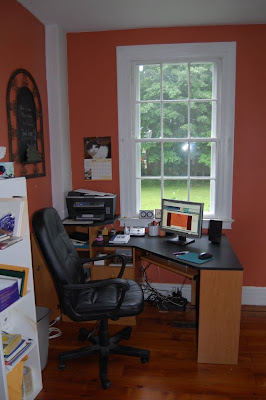 And it makes me feel so organized. I love it.
Then we had to find a place for my "check out", which is actually an old organ with the keys removed. I found it in the barn, and my cousin brought me a piece of slate for the top of it.
So we moved it out by the back door, which I didn't think I would like. 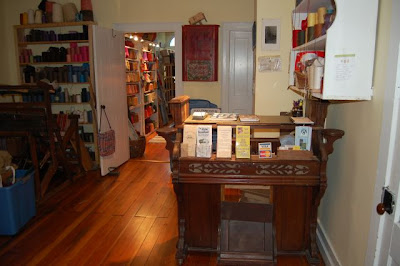 But I did. It worked out quite well. 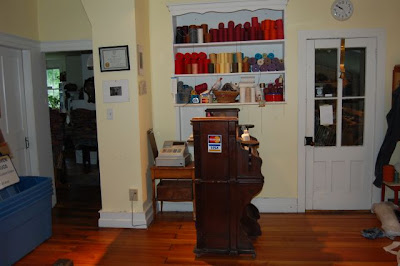 And I guess the check out by the door is appropriate anyhow.
So today, it has rained and rained, and I continued the organizing that Tammy and I started yesterday.
And I finished one order, and started another.
Then I looked for the UPS truck, but couldn't find one, so I had to go to the UPS distribution center, which has the craziest hours ever......3:30pm to 6:30pm. When I have packages to send out, I usually take them with me, and look for the UPS man on the way home. I know all their stops on my route. Sometimes I think the UPS driver that I most often find suspects me of stalking.

I was actually joking with someone the other day that when I unexpectedly see a UPS truck, I get all excited. Like an addict.
Guess you had to be there.
Posted by Hilary at 7:04 PM

Did you see the post star today? Good bye LRAC? You were in it.

Cute kitten by the way!

and good bye was appropos. Perfect.

I get the excitement of the UPS truck-growing up, my little sister called it the yarn truck! We are a multi-generational fiber people! Good decision on the kitten-it is a cutie. How I would love to visit your studio some day.......

I can see why you'd be so tempted to keep that cutie but I know the expense of prescription cat food. Every cat I've had (4 in total) has needed to be on special, expensive food for one thing or another. That checkout/organ is wonderful. Your home looks just beautiful with all of your creative touches and bright colours.

I'm so happy you found a home for your kitten!!! My son and his family moved in with his grandmother who has a spoiled dog and my son has two spoiled cats. One of the cats is fine but the other cat does not like the dog at all. Hopefully they both will come around in time.

Love your rugs,kitties,studio etc! Did you notice that nail sticking out of your loom in
kitty pics 2 and 3. It might need a bop.
From a concerned weaver...

I'm so pleased you were able to rescue the kitties and that you found a home for that last one. I would love a second kitty but our vet assures us that Charlie as a calicivirus carrier would be toxic to another cat, so Charlie has to play with dogs.