I am feeling blah this morning.....tired, too. I woke up at midnight, and in a split instant, I remembered that I had left a candle burning at the studio. I went through the usual....are you sure? really sure? ....and I tried to envision myself blowing it out when I left, but I knew I hadn't. I only pondered it for 5 minutes, then I got up, got dressed, and crept downstairs quietly.
On the road, driving the 8 miles to the studio, I wondered what on earth I was doing. But you know those times when you are just on automatic pilot, doing something that has to be done? You don't want to do it, you could get angry about it, or annoyed, if you allowed yourself to think about it, but you don't. You just proceed forward, to get it done. And I knew that if I didn't do it, I wouldn't sleep any more all night.
There was little traffic in town at midnight. I was careful to observe the speed limit though, and I did see a couple of local police looking for people leaving bars.
I got to the studio, and could see the flicker of a the candle in the dining room as soon as I pulled up to the house.
And a raccoon scurried off the back porch.
Miss Puss got up to greet me, looking like me, like she had just crawled out of bed, yawning.
Kizzy didn't bother. He usually waits til you call to him.
But I felt relieved to have taken care of it, and the whole trip only took me 45 minutes. 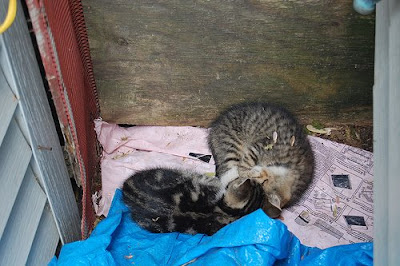 This morning, I am still up at the crack of dawn. I wish I could sleep in, but it just isn't in my nature. Besides I had to go outside and rebait the trap. We discovered the other day that a stray cat had given birth to her kittens under the back of our house, where there is a crawl space under an addition. 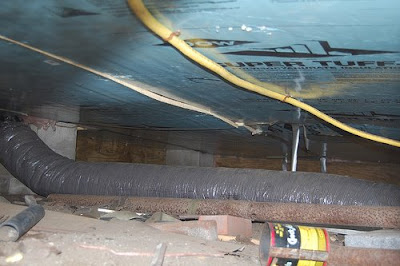 At first, it looked like there were two little ones, but no, there are actually five. The mother is not feral, but frightened, and uncared for. She let me pet her head, while she scarfed down food I put out. But she growled when I went near her kittens.
Tammy, and her boyfriend Shawn, came over to help. Shawn crawled in the hole to see where they were......sorry, Shawn, I had to use this picture! 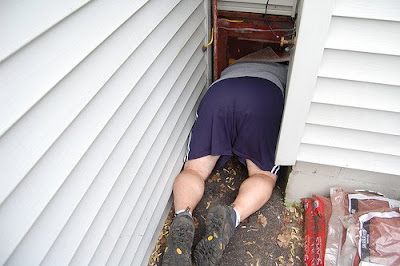 So project kitty save was on. My husband, who does not really like me to post about him.......which is difficult because he is a huge part of my life, said "here you go again, trying to save the world".....I said no, not the world, just my own space, and these kittens are in my space. If I don't capture them, and find homes for the five kittens, get the momma fixed, and then find a home for her, the result would be SIX cats out there procreating. And this mother cat can be socialized, she is not completely wild, just abandoned. And the kittens are little enough to be domesticated, too. I feel responsible. It is part of being alive.
There is nothing sadder to me than feral cats. I learned a lot two years ago, when I realized that I had kittens in the barn at the studio. I caught, neutered and kept Kizzy. I caught, neutered and released his mother, who was very wild, probably feral since birth. And I tried, but failed, to catch a sibling, who was soon killed in the road.
When I spend money on something like that, I don't feel that I need to justify it. Other people spend it on cigarettes, clothes, gambling, golf, alcohol, and lots of other things that I don't spend it on. So it's OK.
Did you know that feral cats have a life expectancy of two years? And that the feral cat had an average radius of TWELVE miles that they roam in?
It makes me crazy when people don't neuter their animals, and more crazy when they abandon them, or "drop them off"......like the cats were going on vacation.
Farmers do not WANT, nor do they CARE for, cats that are left on their doorstep.

Cats have been domesticated, and they do not fare well on their own. Which is why they live two years, and not eighteen years old, like my mother's cats both did.

I just need to catch kitties. Two so far, 3 babies, and a mom to go. 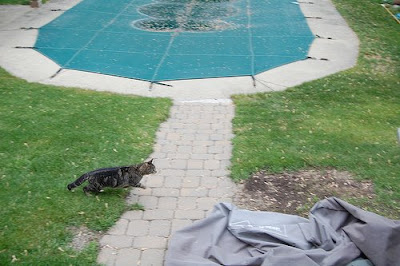 Update: Early this morning, I looked out the kitchen window, and saw a third kitty on the porch. I went out in my pajamas, and caught him. His mother came at me with a vengeance, but I managed to get him in the crate with the other two.
Later, I caught Mom skittering across the back yard.....and I watched her go into the neighbor's back yard, and slip into the bushes lining the fence. As I stood there watching, I saw a kitten pop his head out of the greenery, and I realized that the momma kitty had moved the last two kittens out from under the crawl space.
Bill and I went out and looked for them, but no luck. The bushes are thick and tight together, and as soon as they saw us, they disappeared.
So I decided to make the best of the situation, and be thankful that we captured three of them, and saved them from the life of a feral cat. 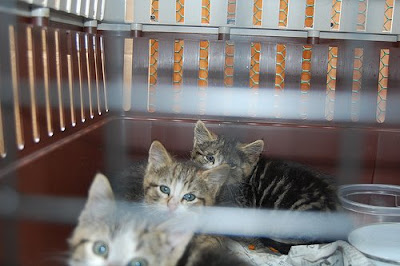 My mom rode with me, and we took them to my daughter's house, who has a good sized empty garage, where she will keep them, socialize them, and find them homes.
And I am still not convinced that we won't get the other two.
I really want to catch the mother, so she can be neutered. 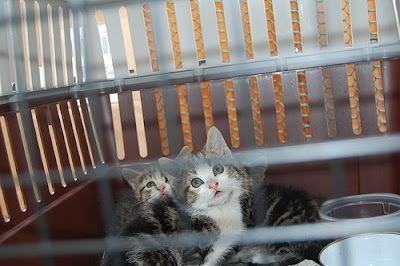 It's going to be OK, little guy. You are the lucky ones, honest.
Posted by Hilary at 7:35 AM

That is quite the cat adventure. It's so great that you're taking care of them. I feel bad for feral cats - so you're definitely helping them all have better lives!

Phew about the candle!!! It's good that you listened to your intuition - and good that nothing happened!

I applaud you for helping the cats. You are right the ones you caught are the lucky ones.
Also good catch on the candle. I once had a scare with an industrial iron, so I am extra careful when I leave my studio space.

Oh boy, is that close to home. My daughter has two outside cats and has let the neighbor's cat into her house - my grandkids like her. One morning Lexie came downstairs and said, "Mommy, there are kitties under my bed." The neighbors haven't neutered their female cat and yes, she gave birth to three kittens under Alexia's bed.

My kids and grandkids have taken care of these kittens who are approaching adoptable age. The neighbor mentioned that this is her third litter, he he he. How is that funny. So DD and family are trying to mop this up as best they can but will probably have to pay for a spay, they've found two homes, and have one kitten for keepers.

I wish this were an exception, but I guess it's not.

No, it's not the exception. People quite often disappoint when it comes to this.
I think it is money well spent......kudos to your daughter.

the kittens are cute, you did the right thing by catching them. Glad you remembered the candle. I once drove back to work 15 miles to make sure a hat press was turned off, it was left on. Am grateful though when these thoughts pop into your head and the impulse to go check on it was correct...

Good for you for helping out with the cats. Too bad more people don't take responsibility. Just a gentle reminder not to paint with such a wide brush...it's probably true that all farmers don't want you to dump off your cats at the farm. But I know of at least one farmer's family who cares for the ferals and dump offs. And if there's one, there's more...

Aww good for you. I love how you rightfully justify the cost. So true that people burn, drink and waste their earnings in so many ways... all too often without taking the responsibility for which you're so kindly paying. Thank you for looking out for these gorgeous felines. I hope you manage to do the same for the others, particularly Mom.

How wonderful to read what you're doing with these cats. Responsible, generous, and kind.

I think what you are doing is wonderful. We had a cat dumped near our home and she had kittens in our garage. We found homes for all and kept one kitten. I would do it again if it happens.

Aww they are so cute! I hope you catch the others :)