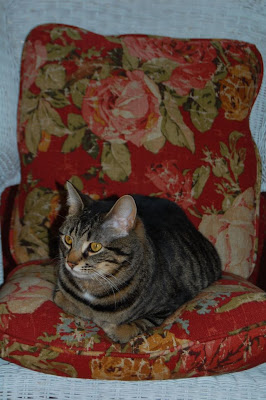 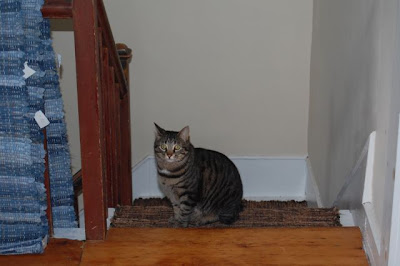 It is early Sunday morning.......Mother's Day, and I am hosting a Weaving Weekend at Crazy as a Loom Weaving Studio. Five fresh new weavers! I am always amazed. They catch on so quickly, which sometimes makes me think that I really do know what I am doing. But seriously, in the past 10 years, I have learned so much, it is very rewarding to pass it on.
They are all sleeping still. I didn't have a clock in my room, and thought maybe I was being slack and sleeping in, but when I came downstairs, it was 6am. Oops. So I am making a pot of tea.
I wanted to update everyone on the kitty situation. I took Miss Puss to the vet last week, and since she had a high white count, we assumed she was the culprit, and she has been taking an antibiotic.
But yesterday, in the midst of us all weaving, Kismet came into a room, jumped up on a box of fabric, and squatted.
Ack!!!!!!!
I yelled at him, and he ran away. In the next hour, he did that four more times, and the last time, I just let him crouch in a position that looked like he was sitting on the toilet, while he stared at me. But he didn't leave any wet spot when he moved away.
Right about that time, my friend Sheila called, and I told her what he was doing. She said, omg, he can't pee.
What!!!????!!!
She said, no, really. She said it happens to her goats. Who knew?
I put him in a room with a litter box, food and water, and closed the door, trying to see if he really couldn't pee. But after he sat in the litter box for 2o minutes looking at me with those eyes, I knew.
So I called the vet, who was closed, then I called their emergency number.
Then I called my dear, sweet, supportive husband, and said "can you help?"
And he came right over, picked up little Kizzy, and took him to the vet.
When he got there, the vet said that if we had waited even 12 more hours, he probably wouldn't have made it.
Even though he didn't seem real sick, his bladder, which should be the size of a golf ball, was the size of an orange. He squeezed his bladder, and only a drop came out. And Kizzy, who started life as a feral cat, just looked at him sadly. No growling, biting, scratching. Just the look.
So the plan was to catheterize him, flush him out with IV fluids, and keep him over the weekend.
And he should be just fine.
And Miss Puss is looking at me, as if she is saying...............so, I went through all that, why?????
And she turns and walks away, disgusted.
Oops.
More on the weaving weekend tomorrow.
Happy Mother's Day!
Posted by Hilary at 6:41 AM

I can close my eyes and imagine being at a beginner weaver's weekend retreat........hope the kitty is better soon, too!

Good catch on the kitty! He must have been miserable. I've heard that cats' urinary tract troubles can often be fixed with diet adjustments. Has your vet mentioned this?

Yes, that is for sure....special food from here on.

So happy your kitty's problem was caught in time and that he'll be fine!!!

I love your blog and your weaving site. I sat over the past few days and read all the entries in both. You've inspired me to bring out the tapestry loom and finish a project I stopped when I found out my mom was sick from lung cancer. She died last October, a few months after her diagnosis. I haven't done much in any of my creative endeavors since her death, and I forgot how it feeds my soul. Thank you for your inspiration. In my grief I was forgetting how good my life really is, and reading about your life was the gentle prod I needed. JB

Jack....what very kind words! Thank you so much, and thanks for visiting my blog. Please come back anytime.

I'm glad the kitty is doing better. Both of my males have had urinary tract woes and are on prescription cat food. It's costly, but too risky not to take heed. I hope he continues to improve.