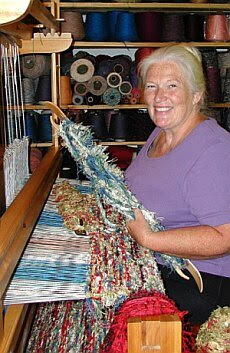 Several years ago, when I was already what you would say is past my prime, I learned to weave. I wish I had learned to weave when I was young. Even though weaving had always fascinated me, I never found the time, or the opportunity to learn. I actually had an old barn loom at one point, but my alcoholic ex husband burned the barn down, and the loom with it. THAT'S another story.
Eventually, I took a basic weaving course, which I enjoyed, although the teacher was not very enthusiastic, and there were too many people in the class for my taste. But it got me started, and I bought a second hand loom before the 8 week course was over. In three months time, I had three looms. The very first was a little Leclerc Mira that was quite a mess. I managed to find Tom Beaudet, a lovely gentleman who helped me get it up and running, and who has been a good friend since. The second loom was a Harrisville studio loom, that my friend Shirley said was only good for kindling. While I am not wildly fond of the Harrisville, it did play a large part in my early weaving, and I have since used it to teach several other people to weave, including my dear friend, Penny, who took it home with her. The third loom was a big old Hammett counterbalance, which I bought from the "goat lady". Seriously. She lived in the barn, over her goats. The loom smelled so bad, the first thing I did was wash it down and deodorize it. Magazines, and a box of papers that she gave me with it had to be burned.........you couldn't stay in the same room with them. If you have never smelled goat urine up close and personal, you would not understand. The Hammett, however, was a very nice loom.
By this time, I knew that rag rug weaving was my passion. I liked weaving towels, and scarves and such, but rag rugs, with all their recycled personality, with the vibrant colors and textures, they moved me. My first attempt was a blue jean rug. It was sad. I had major tension problems, and when it came off the loom, you could see through it. I threw it away.
So I went online. I found a website with blue jean rugs, and I bought one. I did everything but take it apart, and used it as my model, and started again. I eventually contacted Chris Gustin, the lady I bought it from, with questions. She graciously answered all my questions. Chris has been doing this for 30 years or so. She has lots of looms, and tons of fiber. For me, who was just starting out, she was, and is, a wealth of information. I have emailed her, called her, instant messaged her over the years. She has always, always been helpful, and shared her knowledge of weaving, and of running a business.
I have often thought about that. Here is a woman who does what I do, has done it longer, and better. She openly and willingly helps me to do what she is doing, knowing full well that I will be, and I am at times, her competition. When you google woven rag rugs, we come up together almost every time. We have come to be good friends, though we have never met in person. If she gives me advice, I know I can trust it. We have shared materials and leads on textiles, and once even a customer. She has proven to me the inherent goodness of people in this world, and she has moved me to pass it on. People often email me, call me, stop by, wanting to know how to do this or that, or ask me what loom to buy, or how to fix the one they have. One lady came to the studio on several occasions to learn how to put her new (old) loom together. And every time that I offer up what I know, and help when I can, it is because it was given to me so generously, that I can do nothing other than to give it away again.
Chris and I have become confidantes in our weaving enterprises. We encourage and respect each other for our unique contributions to the craft. I trust her, and she trusts me. It doesn't get any better than that for two people who are making a living from the same endeavor.
So thanks, Chris, for being my mentor, and my friend.
May all our rag rugs be tight and even and beautiful!
Find Chris at www.homesteadweaver.com
She makes awesome rugs.
Posted by Hilary at 10:15 PM

I totally agree with you in the sharing of what we know, with kindness and enthusiasm. This also will help ensure the skills will be passed down to other generations. But most importantly, sharing our gifts and blessings with others is just simply the right thing to do!

I have enjoyed reading your posts, and am so glad you shared about your mentor and your persistence in learning how to weave. Very inspiring!

Thanks for your comment, Kathy.
I feel it is so important to not only "pass it on", but to acknowledge how much inspiration and support we get from kind people who have already followed their passion. I guess it is truly a gift that keeps on giving.

Such a lovely post honoring your friend. Who are you passing your skills on to?