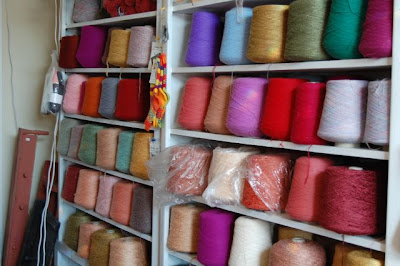 So much thread, so little time.

I should be doing an inventory of all this, and putting it on my web site. But the truth of the matter is that I would rather be weaving, or planning weaving, or thinking about weaving.
Today I took an old rug apart, so I can reweave it. Sounds crazy, I know. It was one of 9 antique rugs that I bought from an elderly gentleman who came to my door, because he thought I would like them. He was right, and I did like them, although I haven't had time to do anything with them until now.
First I took them home and washed them. Then they have to be taken apart, which is very slow work. It is amazing how thin the strips of cloth are in these rugs, and how tightly they are woven. Unfortunately, the warp wore out in several places, and there are big holes in most of them. Patching them didn't move me, so I am giving them a brand new life with new warp threads.
I put a bunch of Adirondack Lodge rugs on my web site today. I am trying hard to stock the shelves. Blue jean rugs are next. I would like a pile of them, and then I will work on placemats. That should get me through to spring.
As you can see, Miss Puss is not too concerned about my work schedule. She stayed in this position for quite some time, watching me trying to untangle and sort upsholstery selvedge for the lodge rugs. 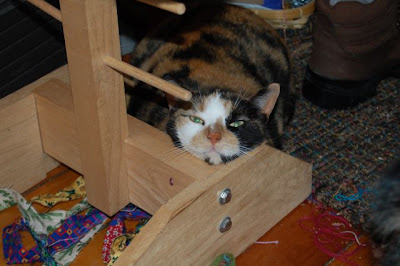 I gave away a loom today.
In the room that used to be the "dining room", I have three looms. One of them is a 7 ft wide Toika, so you can imagine, it takes up a lot of space. Then I have two other 45" wide rug looms. It is too crowded, it is very difficult to put a warp on sectionally in such close quarters. The room is big enough, I just have too much STUFF in it. When it is clean, it is bearable, but honestly, that doesn't happen that often. Weaving with mill ends, textile waste, selvedge, sock seconds........makes a HUGE mess. So I have toyed with the idea of getting rid of one of these looms, giving the whole room much needed breathing space. I planned on taking it apart and putting it on the porch, and then when the snow melted, moving it to the barn. Then an old friend called. I just taught her to weave last November. She said she wanted a loom someday. So I told her I had a deal she could not refuse. The loom was hers, and I would even help her set it up.
I think that a loom taken apart, idling in a barn, is pretty criminal. Much better for it to have a home, with a new weaver, who wants to weave. They will make beautiful music together.
And who knows, another loom may find me.
Things happen.
Looms happen.
Posted by Hilary at 7:39 PM

I just took over the dining room as a temporary sewing room. We'll see how long "temporary" is!!

A big loom does kind of crowd out everything else, doesn't it?

Your yarn stash is beautiful!!! Makes me want more!

Your muffins look divine!! Not good for my "eating" infection, though.

A wonderful post! Happy birthday, and good for you for passing on that loom to a new weaver. That's how I got started...