Those of you who have followed my blog from years ago, will remember my brain surgery in August 2012.
Shortly after that, my grand daughter, Gabby, wanted a "prairie girl" outfit for Halloween, and of course, I said no problem.
But it was a problem.
I didn't admit it then, and I don't really like admitting it now, but my brain was not completely rebooted.
I struggled with reading the pattern, and just about all of it.  I'm embarrassed to say that it was really, really hard, and I was not happy with it.
But she loved it.
And that made it all worth while. 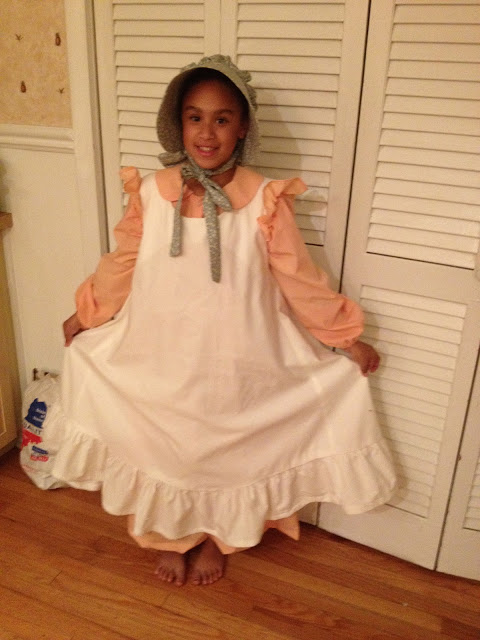 Fast forward nine years, and the outfit gets passed down to my youngest grand daughter, 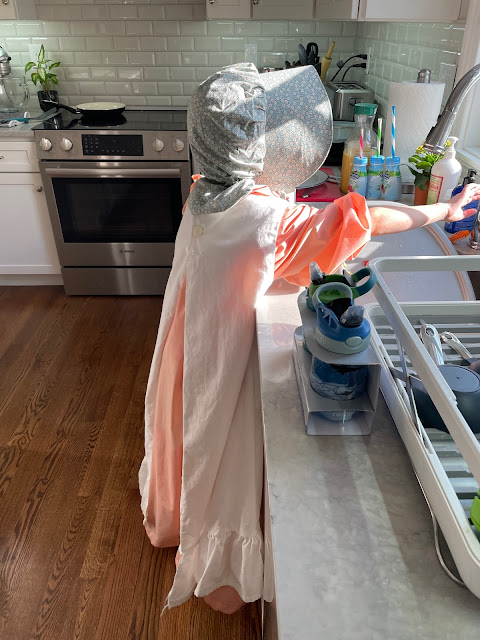 And the power of persistence pays off, again.
It just makes my heart glad, and puts some of my grief, for all the losses to come of that incident, to rest.
If that makes sense.
There is nothing that makes me happier than these grands.
Watching them, knowing them, being a part of their lives.
I have no idea how long I will be around.  They may grow up and barely remember me.
But still, I will have impacted their lives, and those feelings may stay with them, for a long, long time.
I hope so. 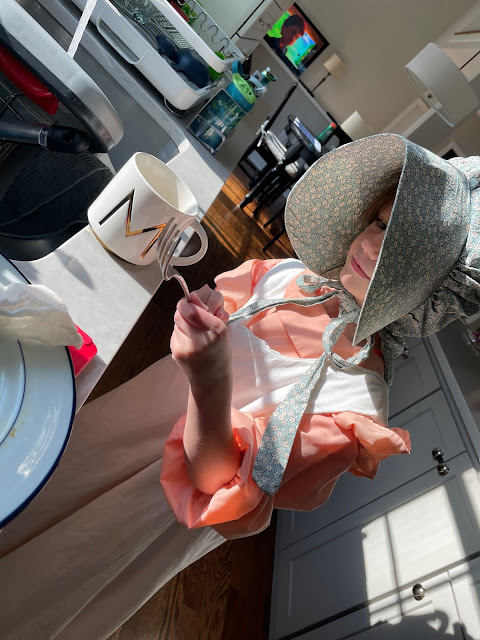 This piece of silk weaving gave me fits.  It was an awful warp, but it turned out to be beautiful.
And it's gone.  I kind of wish I'd kept a piece of it. 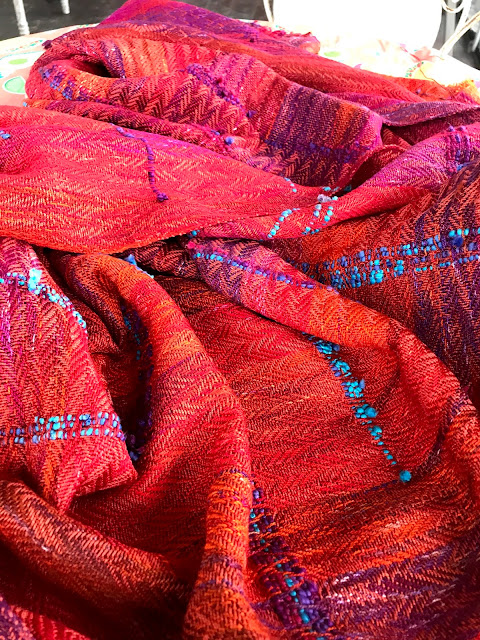 In other news, I have been amusing myself making some funky art pieces to hang on the wall, for no other reason than that they make me happy. 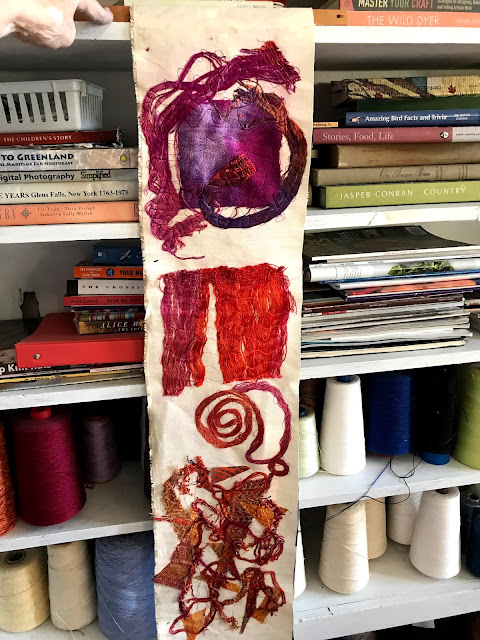 Sydney says, " That sounds like a plan, to me."
One of these days, I'm going to write a book, called "Sydney Says". 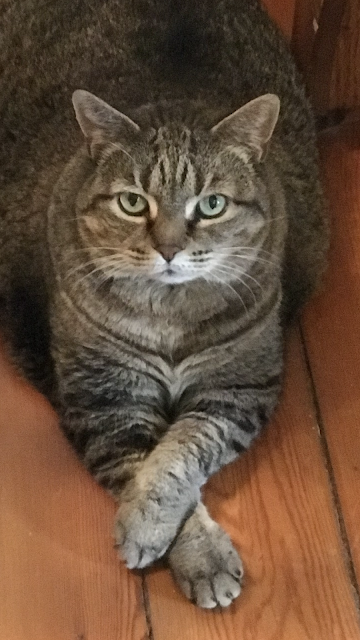 I have wanted a fountain for a long time.  I had this old whetstone behind the  barn, the wooden frame had rotted, and there was a metal rod sticking through the middle of it.  My neighbor and friend took the rod out of it for me, and it is perfect.  I can hear the sound of the water falling, from the screen porch.  It is soothing, and I love it.  $40 total cost. 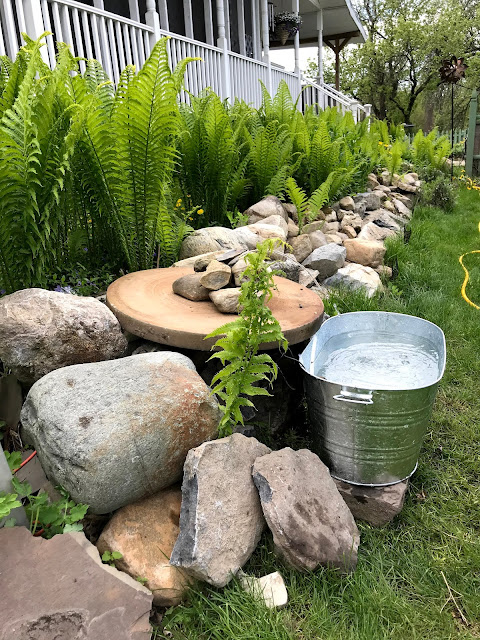 L brings  me asparagus every spring, so I made two asparagus leek tarts, one for her, and one for me.
They were easy to throw together, and delicious.  Definitely a keeper. 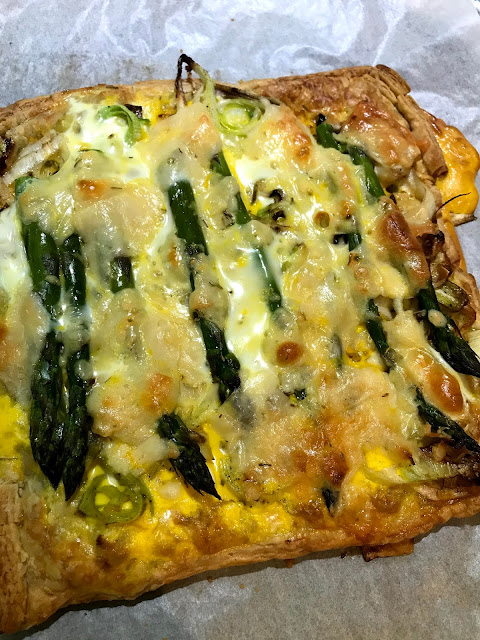 Another idea that has been rolling around in my brain.....the fountain in the middle of the labyrinth.  I had water in it the first year, but the cord was an issue, keeping it buried under the rocks and the pebbles, so I eventually gave it up.  Last year, my "hens and chicks" went a little wild, so when they came back this year, I decided to give them a new home.   I am hoping that they will fill in  and come back every year, and that the fountain will take care of itself somewhat, and not look so empty and forlorn. 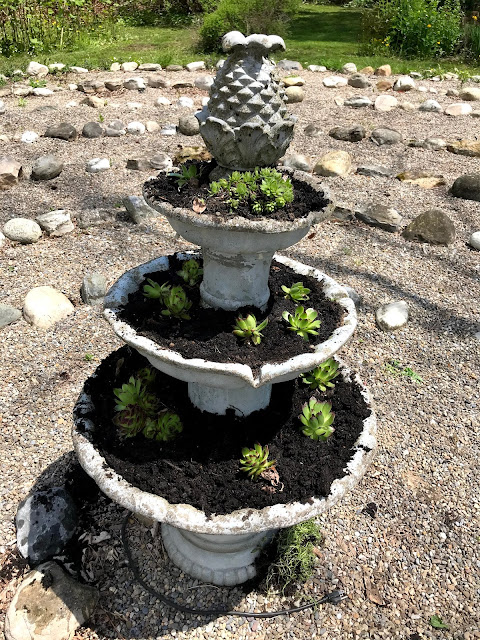 On the knee issue, 8 months of dealing with the pain is just about enough.  It has made me miserable, and there is no getting better unfortunately.  So after seeing two different doctors, I am scheduled for a knee replacement the end of June.  I wish it was tomorrow.
Yes, this getting older thing is tough.
There are a whole lot of things about it that I don't like.
I am sure you know what I am talking about.  No need to elaborate.
But then there are perks.
So many.  Not caring about what people think anymore, after years of doing just that.
Not getting up and going to work for someone else, morning after morning.
Appreciating all those little things you took for granted your whole life.
But most of all, this. 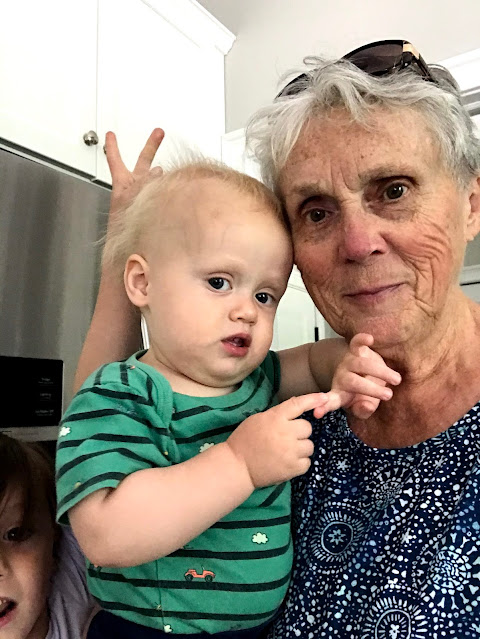 Being grateful for the opportunity to get old enough, wrinkled enough, to be their "Mimi".
Or getting to be, as my little grandson said,  an "old lady".
How is that so fine????? 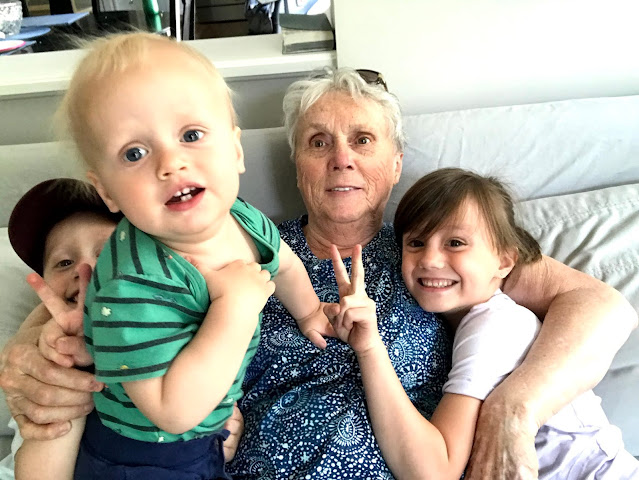 I think your funky wall hangings are wonderful.

That last pic of you and the grands is a framer. So cute.

Glad to hear that you are getting the knee done. Pain is so debilitating. Once the surgery is done, the constant gnawing pain will be gone. There will be a little pain initially, but it's from the incision site and will go away.

It's been 4 years since rightie was done and 3 for leftie and I am doing great. Also, my 91 soon to be 92 year old brother-in-law had his knee done 2 years ago and is walking around like a champ.

Wonderful wall hangings! I can see a lot of people wanting them.

I agree that the last photo is a keeper for framing for sure. Once again your approach to life, in light of all you have been through, is an inspiration. Thank you.

That prairie girl outfit is just darling!
Love your wall art--and it is art.
Fountains are always so relaxing to listen to.
Love making the tall one into a planter, though.
The little ones make everything worthwhile!! :)

Grands do make things amusing, heart-rending and happy--sometimes all in the same day. My 6 yr old GS did mention that I was pretty old (this after eight months of us virtual schooling together), but then another one--my 25 yr old GS--wrote to me saying how lucky he was to have me as his grandmother and how much he appreciated all that I have taught him. Didn't cry about being told I was old (hey, still here), but did get a tear in my eye upon reading the appreciative message.

Wishing you the best of luck with the knee replacement.

I just love your posts ❤️❤️❤️

I haven't been back to blogspot in many, many years. I thought about you tonight and decided to go exploring. I'm glad you're well. You have a beautiful family. :)

Your friend from Virginia who went back (again) to Georgia... because... well, he's special.