A few months ago, I made an attempt to do some kind of fabric collage.   It was an epic failure.
I really thought it was going to be good, and it wasn't.
I was disappointed, but just chalked it up to a bad decision.

Then I decided to make the prayer flags, I thought maybe that would satisfy whatever creative itch
I was trying to scratch.
They were ok........more appreciated by other people, me not so much.

Then, a chance email from a friend, who made this suggestion.
I was off to YouTube, then to Joann's for some supplies, and before you knew it, I had found
that illusive endeavor I was looking for.

Introducing Crazy as a Loom Collage 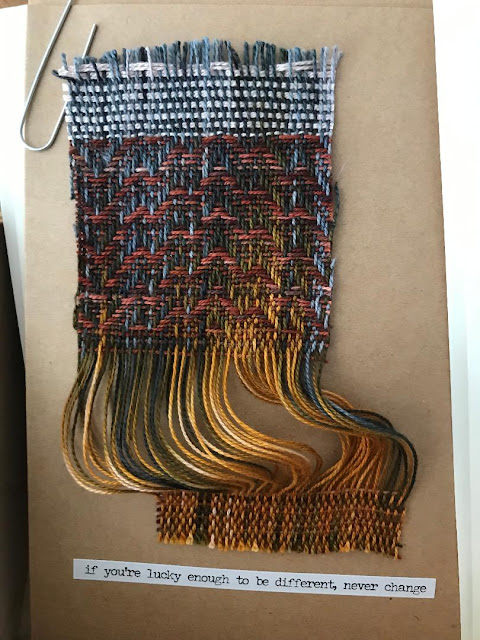 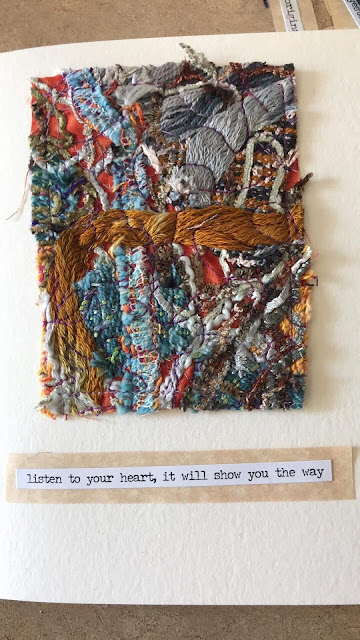 My only problem making these collages, was doing the quilting.  My sewing machine is not level with my sewing table, so the piece I was working on would fall off the edge, and the pieces of fabric and ribbon and thread that I had on it, would slide off.

So, my answer to a $2000 sewing table, to get my machine level, was a $9 box from the UPS store.
And some painters tape.
It really does work perfectly, and will be easily stored when I'm not using it. 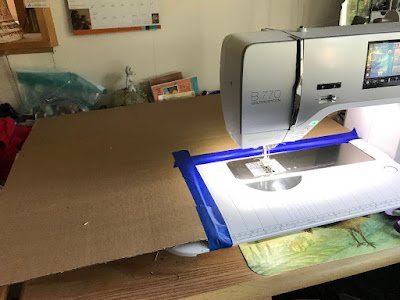 I did some framed pieces as well. 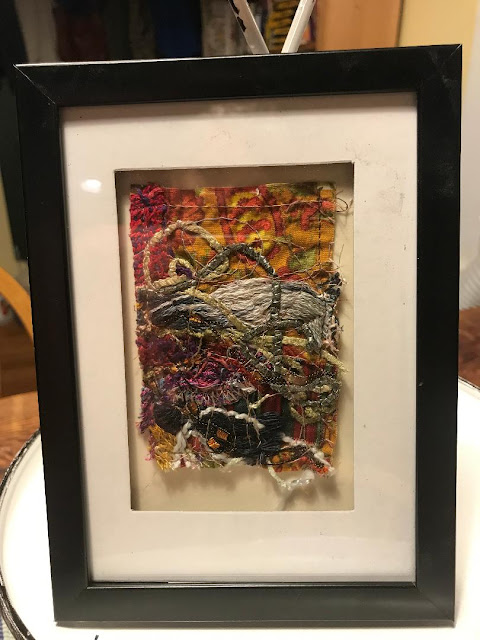 I'm ready to take some cards to our next show. 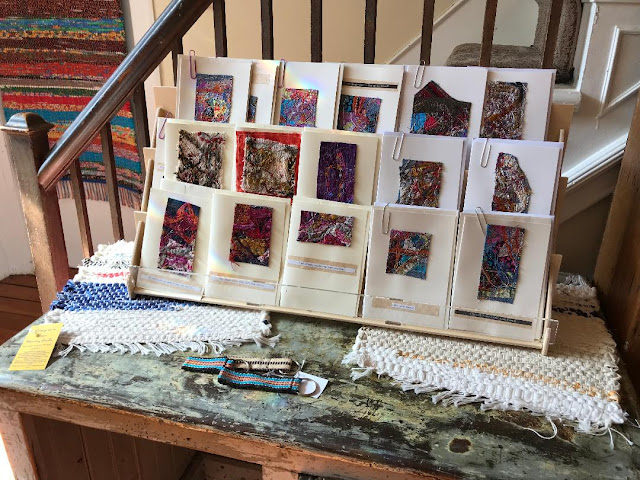 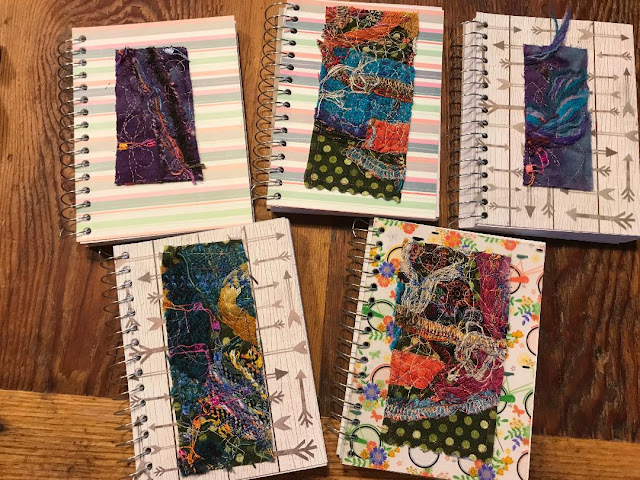 Some with sayings, some without. 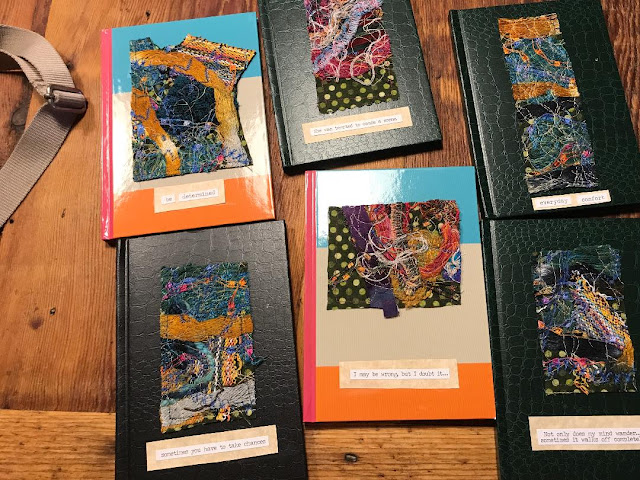 I have to say that I don't even really care if they sell or not, though I think they will.  I am having so much fun making them.  It's an outlet for something that I was missing, and I'm using all these scraps from weaving.......fabric, thrums, all of it.
So it really makes me smile, to be making something that I like, from stuff that I would have thrown away. 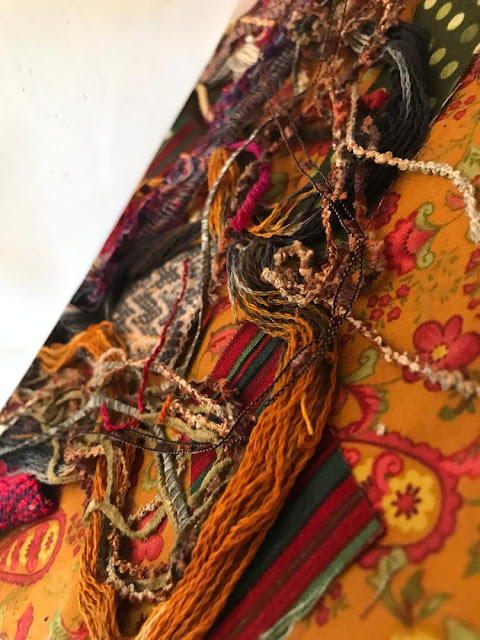 Of course, my sewing room is a complete disaster, but I will just have to deal with that for now. 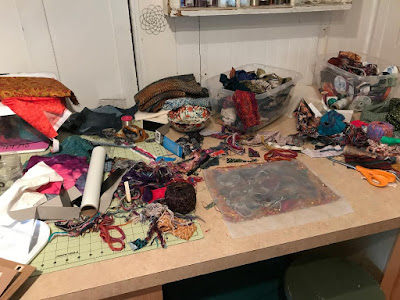 It's the price I have to pay. 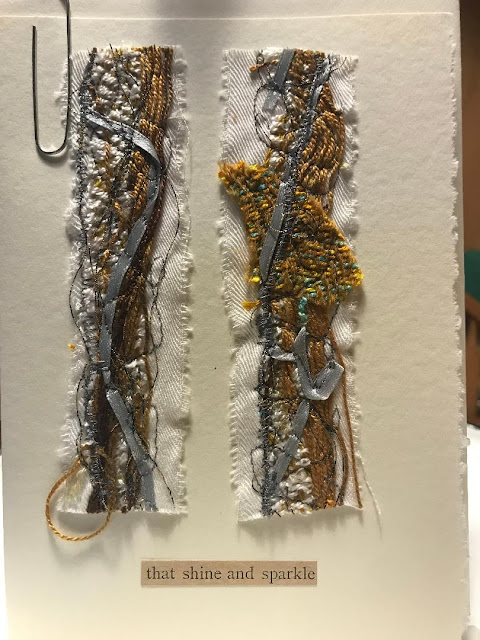 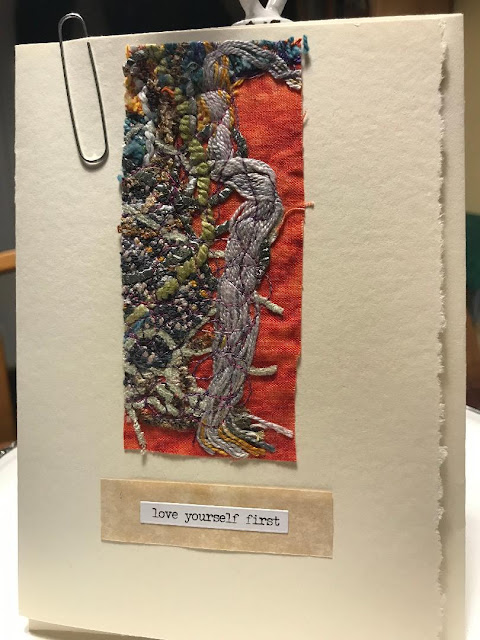 And right now, this is just what I need.

Okay . . . I would look at your desk and see nothing but a mess to be cleaned up.
You look at it and see the beginning of enchanting treasures of textile art.
I love looking into your creative brain . . . you have an amazing talent.
Thank you for sharing it with us.
You're awesome!
Connie :)

So glad you've found a niche that makes you happy. I think you'll sell them quickly at your next show.

Your cards are beautifully creative pieces in all their different applications! I am totally inspired! I love the idea of using everything and anything, left from other projects and ideas. And a trashed sewing room, by the way, or any work space means creativity is at work and stuff is happening! Wonderful art coming out of this wretched heat wave! Stay cool hydrated!

What lovely pieces of art! I love them. Brilliant way to use up scraps, and you are making them so much more.

I was flipping back through old blog posts of yours over the weekend, searching for something that inspired me (mobi poncho) -- and I was reminded that it had been too long since I said thank you. Thank you for the weaving inspiration...and the inspiration to live each day to the fullest, with gratitude, no matter what life throw at me...and thanks too for all the darling Nala photos!

The Weaver of Grass said...

All are awesome! You are truly an artist!!!

Your cards are beautiful, Hilary. They should sell well. You are such a creative lady and always an inspiration. Deb