Summer is Dames Rocket and Fireflies, in my humble opinion.
After that tomato sandwiches with mayo.

Little excitement here re: the health of DH......couple emergency room visits, one by ambulance, and doctor's appointments following, plus more pending. 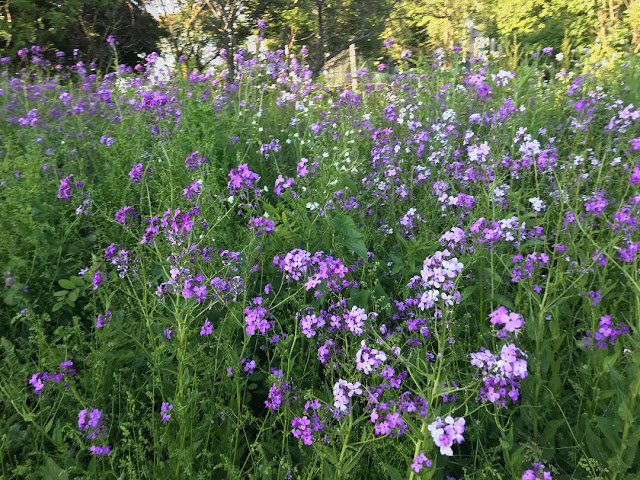 In an attempt to get control over some part of my life, in between all this medical stuff, I decided to do some purging.
The loft of the barn was in horrific shape, with so much clutter there wasn't room to walk.   So I proceeded to sell and gift things on FB.   A lot of the junk left that way.
Then I threw the rest out of the window onto the driveway, then dragged a lot of that out by the road, where crazy people picked it up and took it home to THEIR barns.

Then I loaded the truck and took a LOT to the dump.

The last small pile was wood scraps and that got burned in what was supposed to be an outside fire pit. 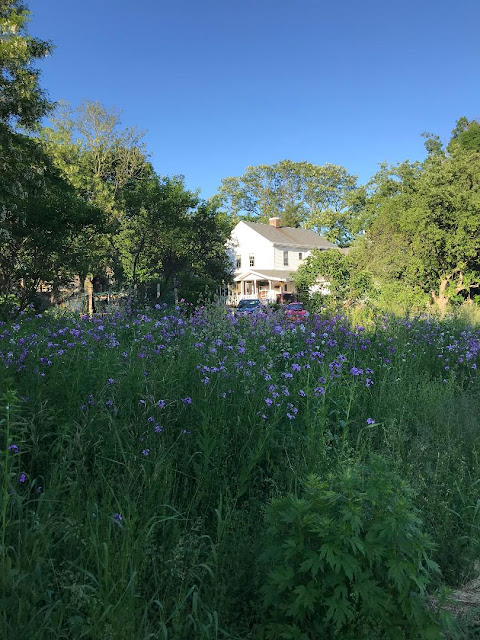 I also decided, that since the rug loom was gone, and I had made the decision to forgo weaving any more rugs, that the 100 lbs of remaining fabric strips should be moved along.
Back on FB.

Unbelievable the folks that asked me if I would "deliver" this FREE fabric to them.

One lady annoyed me so, that I asked her if she wanted me to bring lunch with me when I delivered the FREE fabric.
She did not respond.

But THIS  lady drove two hours from Vermont, and arrived at 8am, to take it all.  She loaded her Chevy Yukon and it was packed full from the front to the back.
My kind of girl. 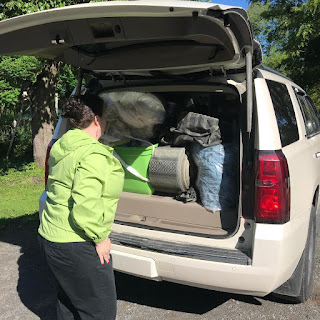 This little space, off the sewing room, was used to store big bolts of cloth that I procured somewhere years ago.
I dragged it all out, and hit FB Marketplace once again. 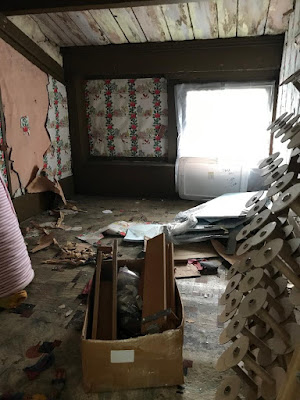 Amazing how fast someone can get to your house, if it's free and they want it.  the guy kept saying, "you sure you don't want some money?"
Nope.

And I felt incredibly lighter once it was gone. 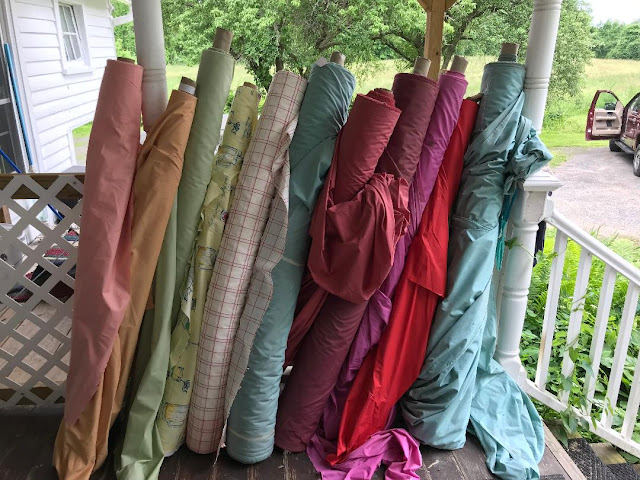 The loft of the barn is about empty, except for a few things that are easily pushed to the sides. 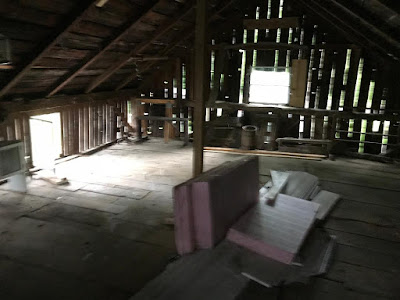 All in all, I feel much relieved to have made so much progress in the last couple of weeks, while the rest of my life goes completely off the rails.
I guess that's how we deal with things sometimes....at any rate, it worked for me for a while.

I still have a few areas in the house that need sorting and purging, and that will be happening soon.

Then perhaps I will have to face the rest of my life that cannot be controlled, but to be honest, I think I might do a Scarlet O'Hara, you know, and think about all that another day. 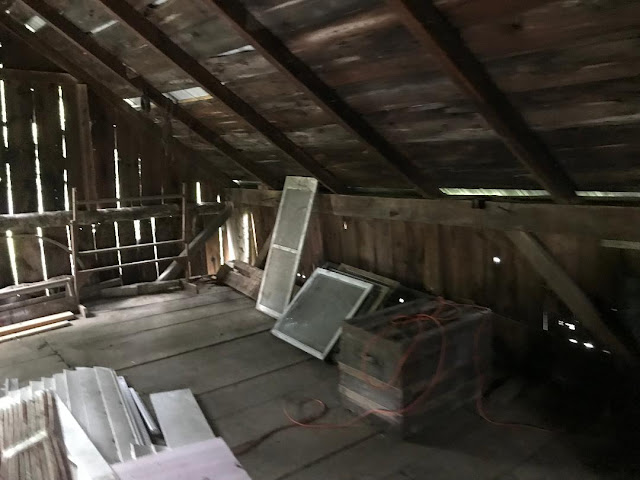 And here's Henny Penny, who has been free ranging for two weeks to get away from the pecking queens in the coop.  She had a sore place on her head, and they were determined to make it worse.

So she's been gallivanting around the property.
Her head has healed, but in the morning, when I open the coop door, she is waiting, and she hops out.

She comes up on the porch often during the day, for a snack and a drink, and she appears to be having the time of her life. 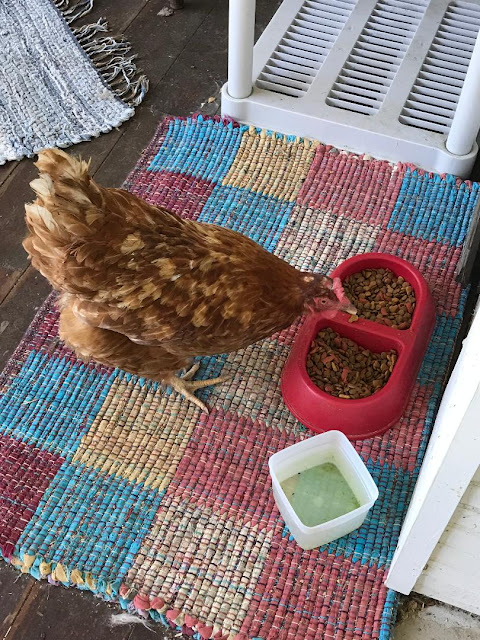 I hope she doesn't think she's coming in the house.

How rewarding. We have been getting our house sorted ready to go back on the market and have given boxes and boxes of books to the charity shops. Some craft things I know I will never use I gave to other crafting friends with a request they make a charity donation. Other things I sold on Ebay and a pile of china went off to auction. Still far too many books here - must have another cull - and then there is the wool stash and the fabric stash . . .

I hope that all the Hospital visits are soon a thing of the past . . .

Getting rid of 'stuff' is SO rewarding! Glad it worked for you. You listed something on FB recently, none of that fabric, that I said to myself, hmmmm....if only she wasn't so far away, I'd jump on that. Don't remember what it was.

i totally 'get' you taking charge of things you can while there's stuff you cant .. having a husband with major health issues gives me a soapbox to stand on here .. take care of yourself .. because ...

oh Henny Penny you are one smart chick

So sorry about the medical situation with DH. Hope it improves soon. Meanwhile, control what you can and then take a deep breath and let the rest flow on by. You've done good with the purging.

I need to learn how to purge. I am stupidly attached to some stuff and I just need to get it in my head that it is not necessary for my happiness.
I so hope that things start getting better for your DH. You don't need that on your mind and he doesn't need heath worries.

I remember folks who wanted more for nothing, back when we gave away the supplies of our weaving career. Hooray for the weaver who drove from Vermont. Yes, she's the real weaver.
I am sorry for the stress of your adventures with you husband. May they resolve soon.

LOL. Love your chicken... such a dear thing. My grandmother raised chickens... I found your blog through Joanne Noragon's blog, whose blog I found through my dear writer friend, Mage, who posts on Blogger under http://urban-archology.blogspot.com/ My own blog is on WordPress. https://tehachap.wordpress.com/ Here's hoping that this comment publishes. Joanne and Mage can confirm I've been having one heck of a time putting comments on their posts! I have a 3-ring binder of rug patterns I inherited from my step-MIL. For now, I make quilts for people...

I admire your energy and your power to release yourself from all your stuff. It must feel very freeing:) You're in my prayers.

Well I LOVE that chicken! And I'll send up a little prayer for some reasonable healing for your Mr. and peace of mind for you, dear friend.

I have been trying to purge, too. It sure feels good!