Early morning walks are in order as the planet heats up.  I don't want Naya having heat stroke from walking when it's 80 degrees.  I don't walk her in the heat of the day, and I don't leave her in the car if it's over 50.

The bike path was gorgeous this morning, cool and quiet.  I have to try to get myself out there before I start working in the studio.
It feels good to have the walk done, and to be honest, it's when I have the most energy. 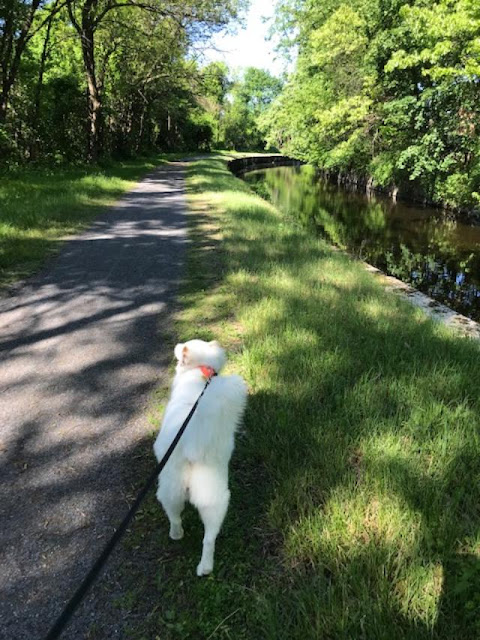 Then we took my car in for an oil change and inspection, and after a long drink, Naya took a little nap while she waited.
She's such a good girl. 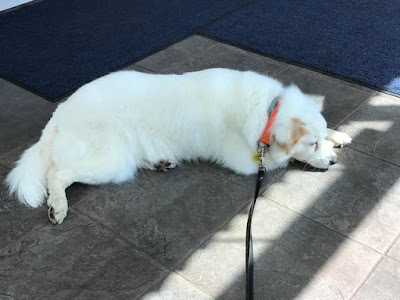 This is Lois' method of tying up her warp.  She couldn't remember where she got the idea from, but I believe I sent her the link.   It's from Melissa over at Tangibledaydreams blog.  Thanks Melissa.

It is quite effective.  Saves warp, and time. 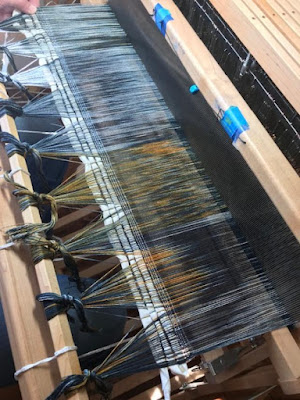 This morning we also put a towel warp on the AVL....  8/2 cotton from my stash of UKI.   Trying to use it all up, so the only cotton I have on my shelves is Brassard ring spun, which is my fave. 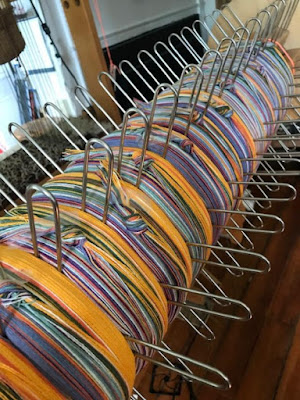 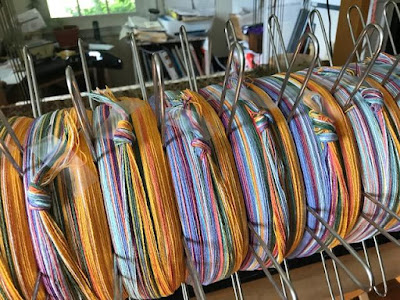 This is the end of the navy warp.

I wanted a ruana, but there wasn't enough, here it is waiting to be sewn together as a möbi shawl. 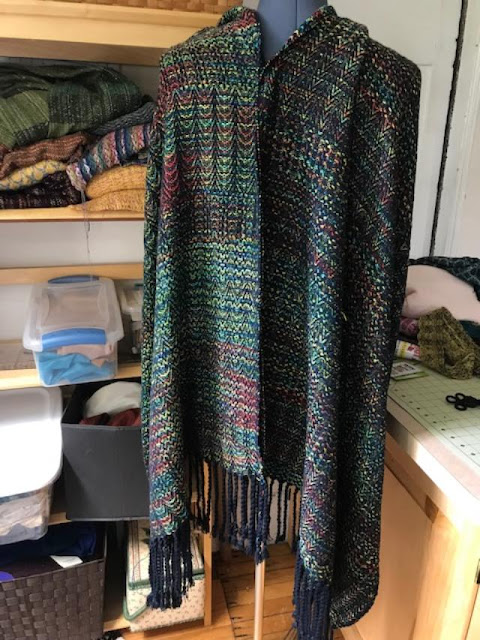 I am thinking of buying some fiber from Habu Textiles,  has anyone tried any of it?  I would love to hear if you have. 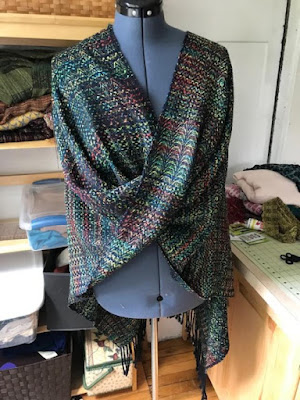 So here is Lois' project once she got going.

The warp is hand dyed mercerized cotton.........her weaving is impeccable.......really, I am so proud of her.
And I'm very pleased with my dye job.  Together, we rock it, don't we? 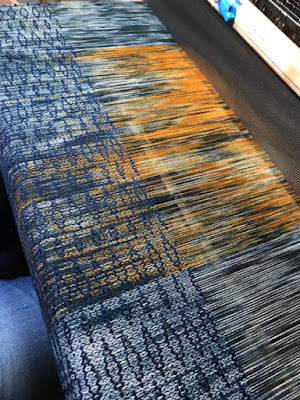 The weft is navy bamboo. 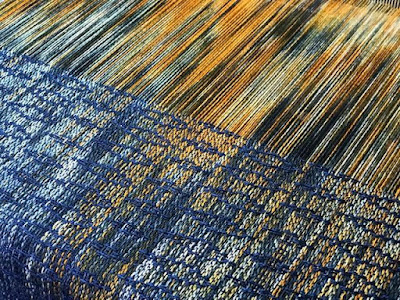 So I took your advice,(thanks for that) and hauled out the Weed Dragon, which has been languishing in the shed.

I burned off all the weed growth that had accumulated, and it didn't take long.

Downside:....I needed a shower and shampoo, because I smelled like I'd been sitting by a campfire for hours.

But it's doable, and easier on my neck than bending over and pulling them all out. 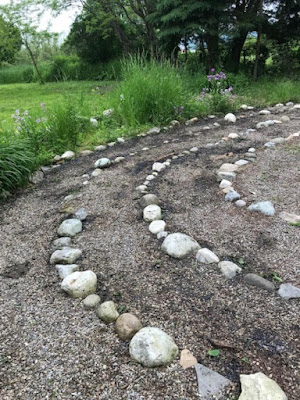 But it did an awesome job.....the whole left side looked like the area around the tree bottom right........

I'll do that tomorrow.
I don't want to use any chemicals, but I get depressed when the weeds start to take over my beautiful labyrinth.

You can not imagine, unless you've done it, how peaceful and restorative it is to walk the labyrinth.   I do it slowly, and sometimes I can just feel the weight lifting from my shoulders.

Old story, for some of you who may not have read it.

Years ago, when I took my two grandsons to walk the labyrinth at a friend's nature preserve, I got my inspiration to build this labyrinth at the studio.
Nev and Logie were 11 and 8.   They ran around the labyrinth like boys run around anything.........and I asked them what the labyrinth meant to them.
Nev mumbled, "I don't know."
So I said keep thinking about it.
Few minutes later, Nev said, "I still don't know."

Logie, who was the younger of them, said, "Mimi, I think I know what it means.  It's where you find the center of your heart."

I still tear up when I think of that.    Two weeks later, my labyrinth was complete, but when I realized that mowing the paths was going to be tough, I put down landscape fabric, which has long rotted, and pebble stones.  I did it with the help of a 16 year old kid that we often hired for yard work, a load of stone, a spray can of paint, and a load of pebbles.  And some hard work.

He still remembers that he is the reason that my labyrinth exists.

Some things are truly priceless. 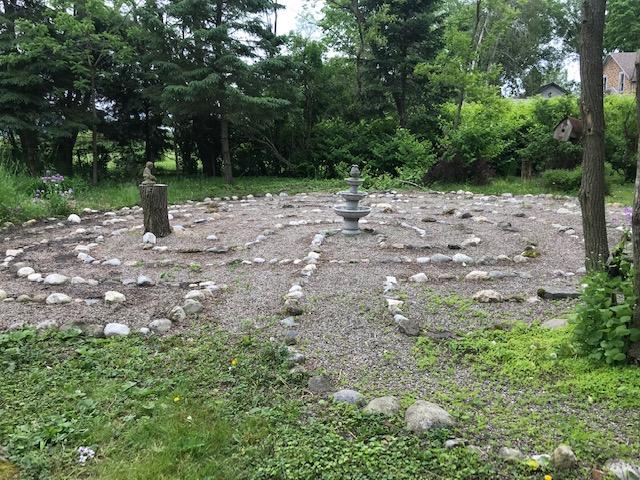 I thought about what your grandson said about the labyrinth just the other day. He was wise beyond his years back then, and I'm sure he still is!
All I can do is smile with your post, things seem so much better. How is your husband doing?

I use heavy strips like those for idle weave. You make me think of my aunt, long gone, who used IBM punch cards from her husband's job. She cut them in halves or thirds, as I remember. Made short work of bringing that tie on up to snuff.

I love this story. Where you find the center of your heart, indeed.

Why a precious memory of a child wise for his years. May you always find peace when you walk it.

Beautiful Naya and I love the labyrinth.

Oh my... you have a Labyrinth!!! You are the one and only person I've ever known (well, I consider your blog an introduction) that has their very own Labyrinth. I wanted to create one in our back yard but the garden railroad took up the area I wanted to use. I would be the only one to use the Labyrinth, but we both use the garden railroad (I am the plant lady and my husband takes care of the track and trains and buildings). THANK YOU!!!