I had this crazy idea to make a fabric collage from all my weaving scraps.  I finally figured out the mechanics of getting them on a surface that would hang on the wall, but the results were less than inspiring.
I have a lot of scraps, can I just tell you? 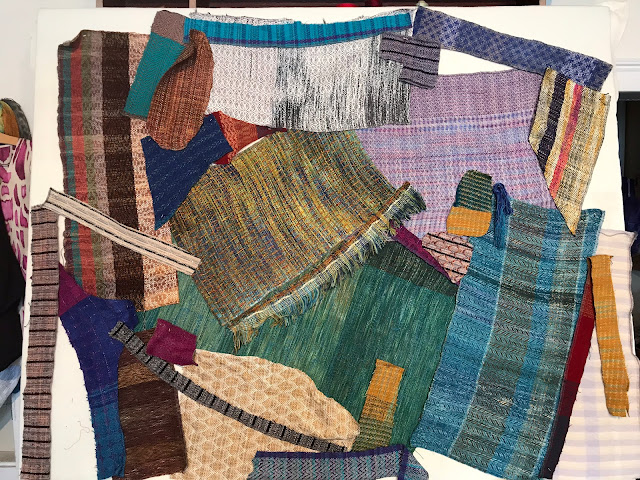 I finally did take them all off, and then I put them all back up with wrinkles, valleys, and hills.....in other words not flat.  They looked better, but I still wasn’t feeling it, so I took it all apart, and decided that it just wasn’t working.
Maybe another time.

I’m much better at creating new dishes for myself.  Meatless, plant based mostly. 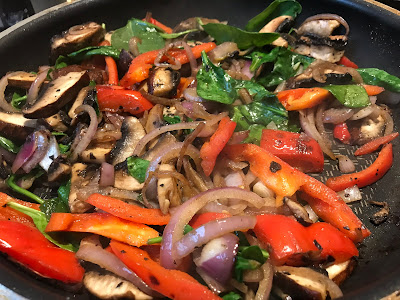 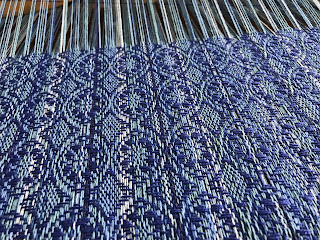 The other day Naya and I decided to walk on the road to one of the locks on the canal. 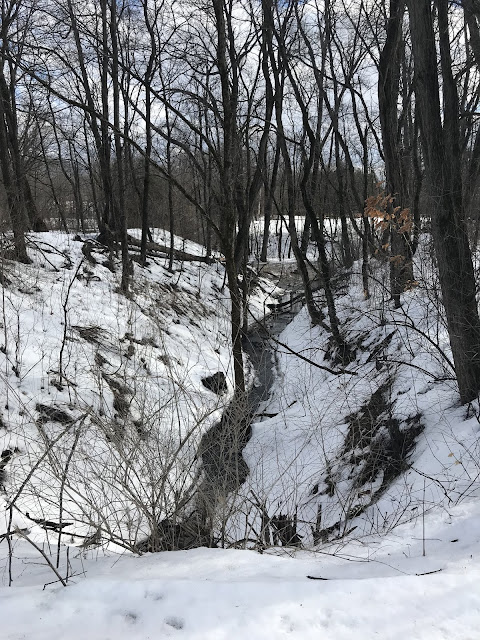 She found a plastic cup, that she apparently thought was quite a prize. 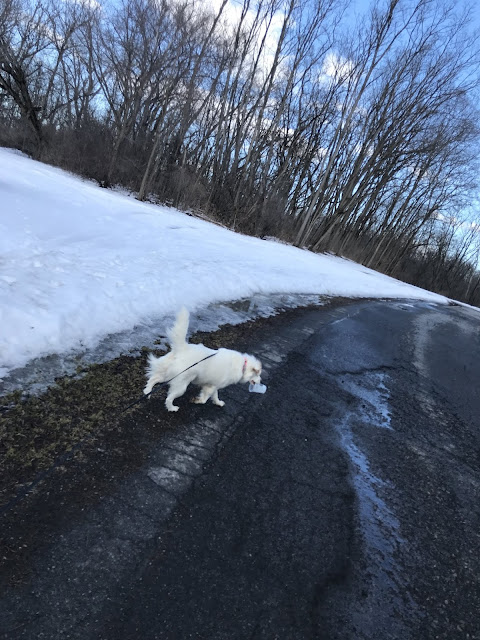 Even though it was a sunny, bright day, it turned out to be a terrifying one.  I parked at one end of the road, and by the time we got almost all the way to the other end, I realized that we were being watched.
Quite a ways away, there was a very large dog......or a coy dog/coyote sitting perfectly still, staring at us.
I stopped dead, then started to back up.   He started coming forward.....I yelled, and he stopped.
We turned and started running back towards the car.

It was much too far away.  My titanium knee does not like running.

I kept turning back to see if he was coming, and he was, so I yelled again....he stopped......we ran.....we did this about three times, and then finally there was a car coming from the other direction, and the animal ran off the side of the road.
By the time I got to the car, my exercise asthma had kicked in, my knee was screaming, Naya was happily oblivious, probably wondering why we were running.

I sat in the car for a bit, not sure what was happening down the road. I suspect that the person in the car was watching this animal do whatever it was doing.

My fear was that it was a coy dog, that was rabid, otherwise, he wouldn't be out in the daytime, so blatantly.
Last year, a woman  in town was attacked by one, not far from where I was walking.....she was in the hospital for a while.

Let me just say that we won't be walking down there again any time soon. 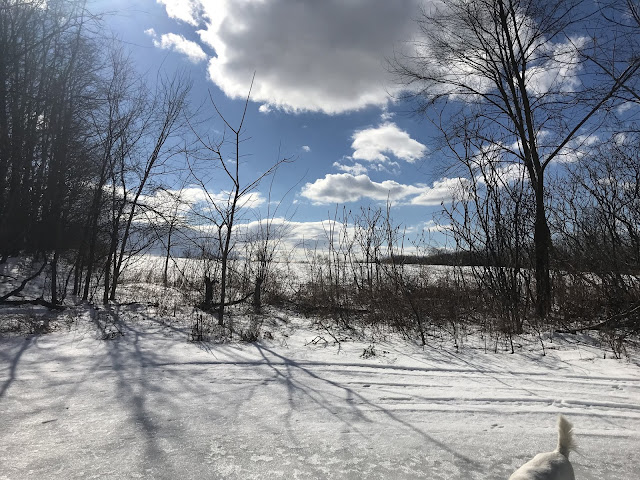 Interestingly, disturbingly, it was the first time I didn't have my phone in my pocket in I can't say when.

Back in the studio, I made some new pieces from a pattern from Style Arc, this is the "Mickey Cape". 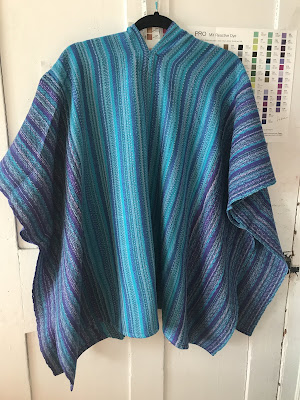 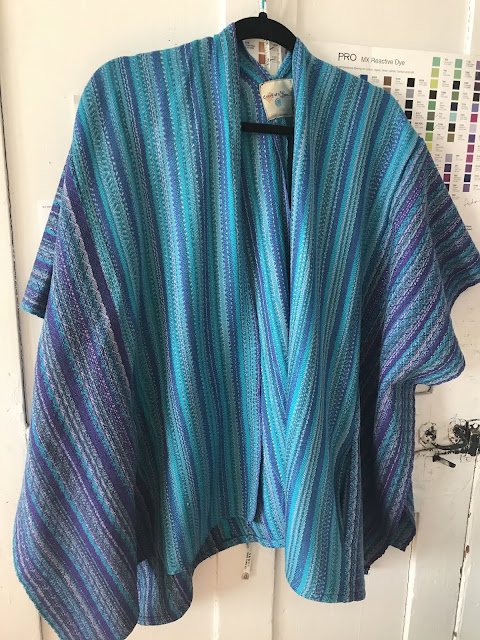 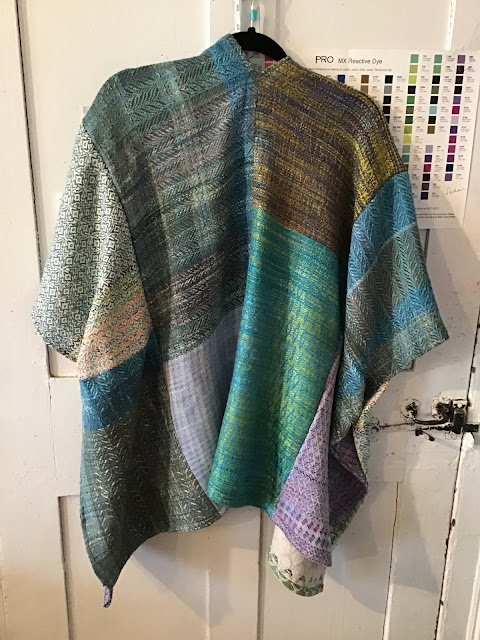 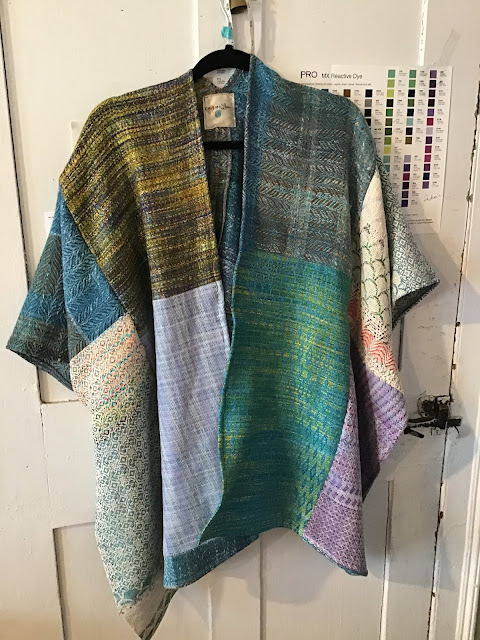 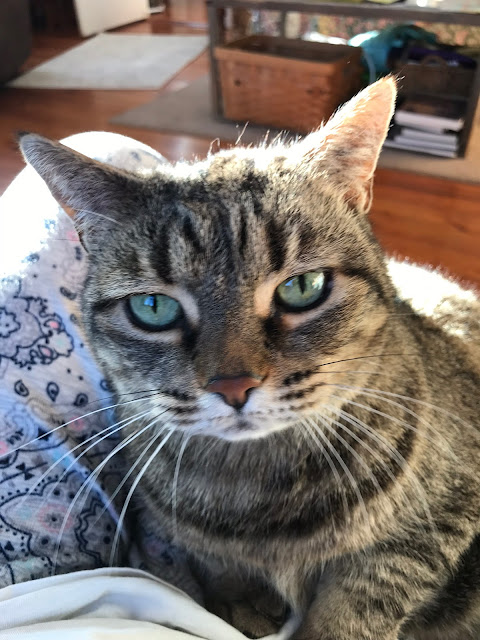 Can I just say that I am OVER FEBRUARY......it's making me crazy....with the cold, the snow, and the skunk that has graced us with his stinky self three nights running.  Isn't he supposed to be HIBERNATING??????? 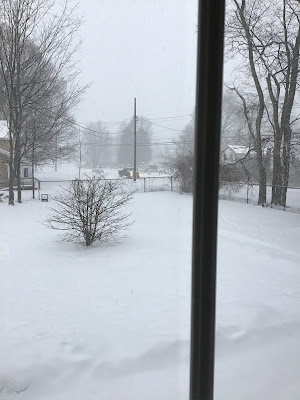 I am also over the squirrels....they are fat and brazen and they never get enough.
But I may have a secret weapon......
Look closely, the squirrel is in the upper left corner.....he wants to cross the window sill
and get to the big feeder on the right .......but he spied Syd in the window.
She gave him the "evil eye", never moving, unless you count the tip of her tail.
This went on for 10 minutes, and the squirrel left. 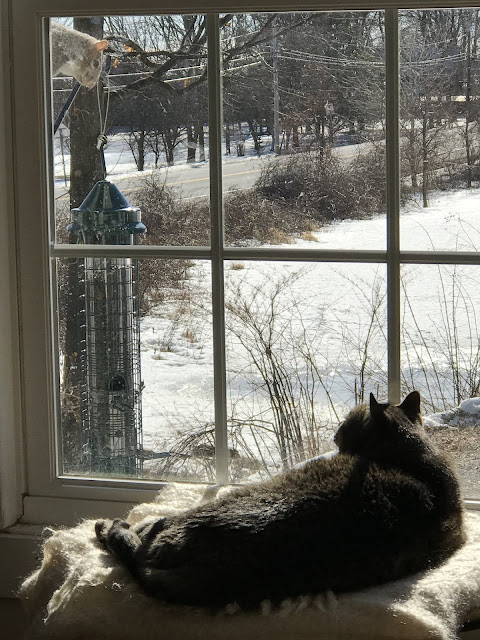 I may put pictures of her in every pane.

Now you will always carry your cell phone. Maybe a good idea to have a really strong walking stick, too. How scary!

The food and your weaving look amazing, as usual. :)
One of your faithful lurkers

I like your original idea of Tibetan prayer flags. Sew them along one edge to a sturdy cord and string between two trees, or two buildings. Hillary Flags. Crazy Loom Flags. I like owning things. Why not.

I have a friend who lives in Minnesota and can no longer tolerate their winters. But her elderly mother is there, all her children and grandchildren are there, and so she will probably never leave. There is no perfect place....well, maybe there is....but winters like yours as we grow older are so hard. I hope you thaw out soon. And NEVER leave without your phone.

I don't know what this means, really, but I was totally struck by the visuals at the beginning of this post. First the collage, and immediately thereafter the stir fry. That stir fry is SO visually appealing. Maybe that's a clue? Maybe divide that big collage up into small sections (by month? by year? by color? by whimsy?) and have a collage/melange/stir fry in each small section? Just a thought.

Unrelated, when I lived in the sticks on more than one occasion I scared & and was scared by a bear that suddenly walked out of the woods in front of me and my little dog - who was never on a leash as I lived on a dirt road. Somehow each time the dog was behind me and didn't notice the bear - or at least didn't react. The bears always wanted to get away, unlike those coy dogs/coyotes.