I guess I am very reflective, of late.

Maybe it's the continuing winter that drives me inward.


Life is change, that's a given.

We get older, our bodies change, in spite of us.  Our perspectives change.

I used to think about life as a destination, but now of course, I realize that it's the journey.

Sitting here drinking my coffee on a Sunday morning, watching yellow, fat birds land on the bush right outside my living room window.
I have not noticed them before, but now I have new windows all around, I do. 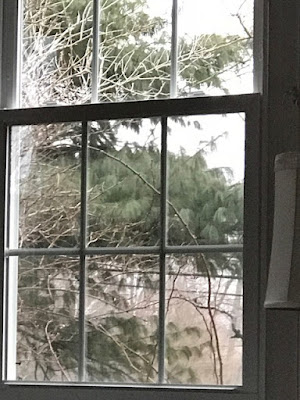 The old windows were just that:   OLD.   They were painted shut, they had full storms, and to wash them was an event.  So they stayed dirty a lot.  Which is probably why I never noticed those little birds.
I am still reviewing my decision to get new ones.

Like I've said,  I anguished on giving up the "wavy glass",  I know that this was a positive change.
Clean windows, the ability to open them, warmer in winter.  All good stuff.

To date, all the windows but one little stationary one over the cellar way, have been replaced.   In 13 years, I have done a lot of updating to this old house, while trying not to have it look like a "new" house.   Just a better one.

There was one window, in the kitchen, that had the name of the original owner of this house, back in 1790, etched into it.   "John Bellamy"
My carpenter took it home with him, wrapped in cardboard, and he is making a shadow box for me,  with it.

I am only the fourth owner of this old place.  The Bellamy family, the Canfields, the Wilsons, and me.
In 228 years.

Sometimes, as my life gets nearer to the end game, I wonder what will become of it.   It's a house, a home, and to me and my family and friends, it's the "studio".  There has been a lot of life here over all those years.   I am unable to control the future of it.   But I pray that someone loves it like I do.  And takes care of it, and doesn't try to cover up its personality.

I've been returning to my weaving roots this past week couple of weeks.   I cranked out three large rag rugs, then Lois and I put a 40 yard warp on, and I wove five 2' x 3' rugs this week.

I have a room full of fabric.....totes full of strips and pieces, huge rolls on the floor.  I have been sorting it, bagging up stuff that I don't like, or don't want to fool around sewing together.
The room desperately needing cleaning and organizing.
I still have about 820 lbs of fabric on big (30-40 lb) rolls.

Then I have multiple totes full........not just in the front bedroom which we call the "rug room", but in the loft over the studio as well.

I wanted to sell the big rolls, but it seems that even at a discount, there are not a lot of rag rug weavers out there who want to host that much fabric.

Perhaps I'm a holdover from another time, where rag rugs were plentiful and necessary.

Well, I still love painting with fabric.  I love best those rugs that are several colors and prints in a haphazard fashion.  Hit n Miss, they are called.  I still love weaving them.
I call them "container rugs".

As I write this, the sleet is hitting the windows.  Yes, April in New York State.  There is still a fire in the pellet stove.   Cozy, yes.   Discouraging, a little. 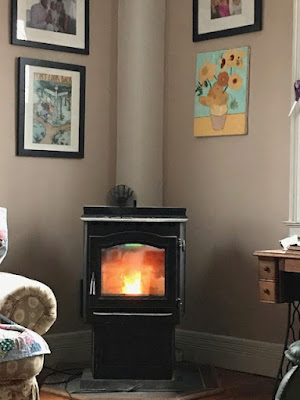 I just downloaded an app to my phone.  It's called  "All Trails".   I hope this year to walk some of them with Naya, and I hope to drag Lois along, and maybe my friend Alice, when she gets back from Florida.

I used to hike the Adirondacks, but I must admit, my compromised neck makes me wary of doing anything that doesn't keep me upright.   There are so many walking trails within an hour's drive, that I think they may do the trick, and satisfy that need in me to keep moving.

I decided it really WAS  time to clean the rug room, which is actually the front bedroom in this old house. 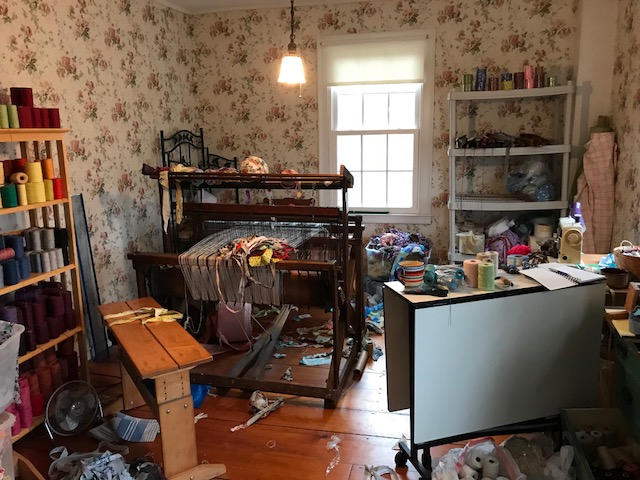 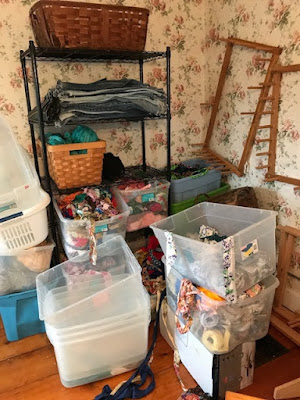 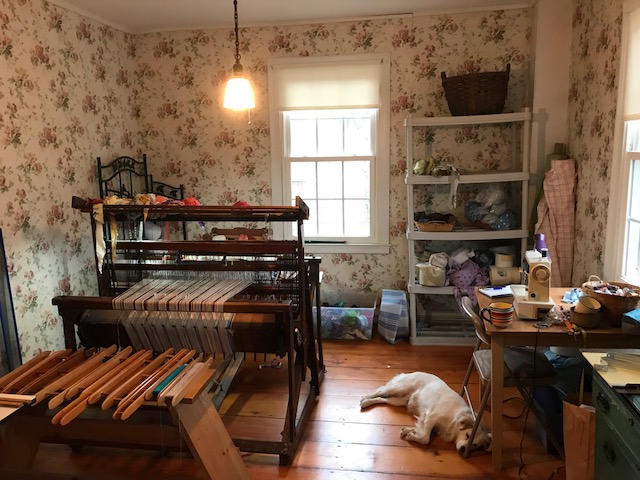 Naya is ridiculous sometimes, in her need to be as close to me as she possibly can.

Under the loom, not bothered at all by the banging over her head. 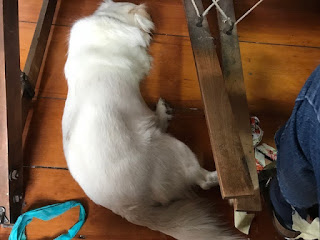 I have been on a mission......trying to restock the rugs for shows.

But actually, I am loving it. 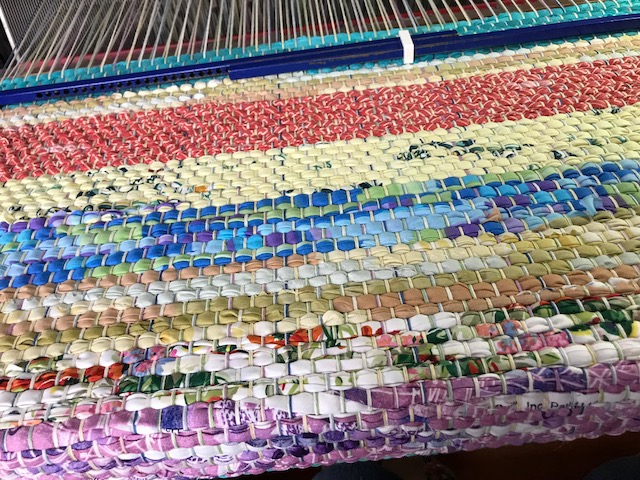 Every now and again, you see something advertised that just looks like it will make your life easier.

I am a huge salad fan.  I pretty much have one every day.

This is a salad maker, from ZOOTZ.

It took forever to get here, probably came from China.......but it got here, and today I tried it for the first time.

So you put your salad stuff in the bowl part.
There's a cuke and a tomato under that lettuce. 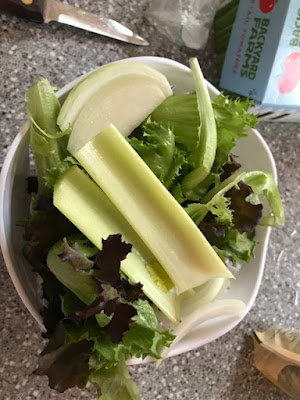 You place the bowl on the base, and flip it over. 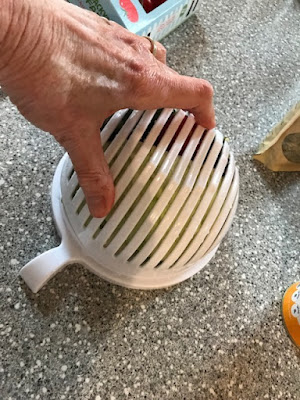 Then with a big knife, you cut down through each slot.

When you're done, you carefully rotate it a half turn, and cut into each slot again. 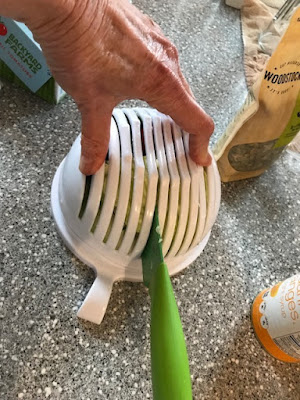 And VOILA, you have a salad. 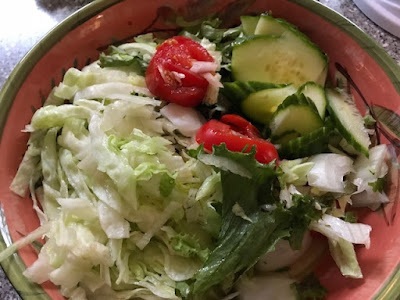 My daughter asked me:  yay? or nay?

And now I leave you with this:  my  new, very organized, pantry, with rubber seals on all the jars.  They are Bormioli, from Italy.

I researched the best way to store food, and these came up first.

The second was Lock n Lock, plastic containers that also have a seal, and lock down on four sides.   I bought those for cereal, pasta, and crackers. 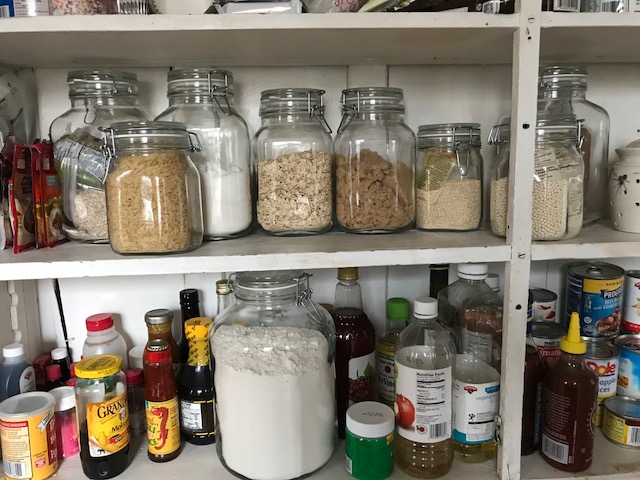 It must be almost spring, right???

Why else would I be cleaning. :)

Ohh, love the salad maker! And the old house. I keep plugging away at DH about moving back to New England. When my Mom goes, I'm going to double the effort. Barring a full move I'm thinking a summer camp in Maine or VT, or upstate NY.
We've got some new feathered friends arriving too. Gold Finches and Western Tanagers.

Oh, it must be in our DNA...this need to tidy up from the winter inside and get ready for a new growing season. It works the same with us, I think...we tidy up our thoughts and goals for the season. Your rug room looks like it's ready!!! Enjoy all the new visitors to your yard and garden!!!

In our community in the Midwest we have a retirement home for veterans. They have a loom and the veterans make rugs to sell for therapy and spending money. Perhaps you have something like that near you as it would be a small fortune to mail fabric of that weight. You might find another kind of organization that would take your surplus unwanted fabric.

Yes, it's definitely something in the air. Everybody is cleaning out and tidying up. It's contagious. I might even catch the bug myself. :-)

Your blog is quite inspiring. I love the old farmhouse especially those floors. Plus your weaving is so beautiful. I value your honesty and much of what you say I relate to. I think when we get to a certain age everything becomes circumspect. At least, I spend a great deal of time thinking about the things that are and the things that are not!
Best to you in your weight loss. I work out and walk but the weight stays relatively the same but I keep saying at least I'm stronger than I was...

Can you believe this miserable weather??....

And your pantry looks SO neat compared to mine. I do love those containers.

There has been some crazy spring weather. Even in California, the northern part mind you, I am sitting by my wood stove with a roaring fire. It is supposed to be in the 80's by the weeks end. I think it is perhaps even more relevant to continue a craft when others are not doing it much anymore. There is a difference between the 'made in China' rugs at Walmart and those you are crafting. I know which one I would prefer.

love it .. i use a similar storage for small leftovers .. but glass with a 4 lock/snap down cover ... and i am admiring your salad cutter .. its quite fabulous

I love your rugs. You being the rug weaver you are, makes your unique and makes the rugs special.

I love your dog.

Glad you love the salad slicer. Might have to get me one especially to use in the RV (it's a class B, which is a van - not a lot of storage room). This would be perfect for me.

Doesn't organizing/cleaning your creative space make it SO much nicer to work in?

Love the pantry organization too! I just found these locking plastic containers that work really well in the RV overheads, and keep my Wasa crackers from becoming crumbs.