The studio draws some people right to it, like bees to flowers.
I recently had a weaving "buddy", a college grad spending the summer on Lake George.  She had learned to weave during her stay in Colorado at school, and was jonesing to get back to it.
She was a lovely young woman, and a quick study. 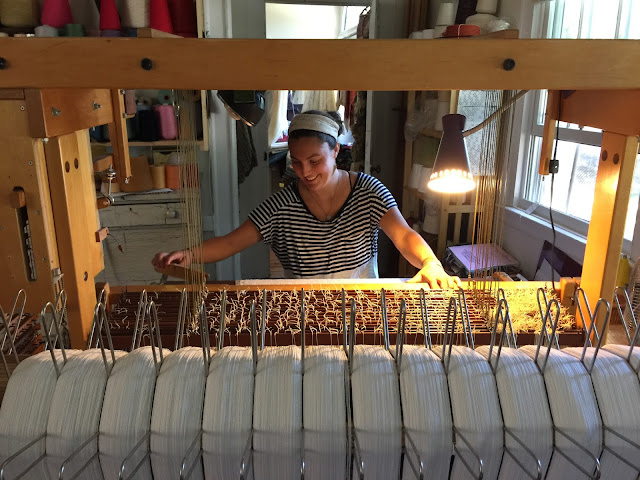 I really enjoyed having her, I only wish she had found me sooner, I would have had her weaving off tons of towels!!!!
But she's off to Iceland now, and then Korea.  She has the wanderlust.
I have no doubt though, that somewhere in her future, is a place where a loom keeps her company on a daily basis. 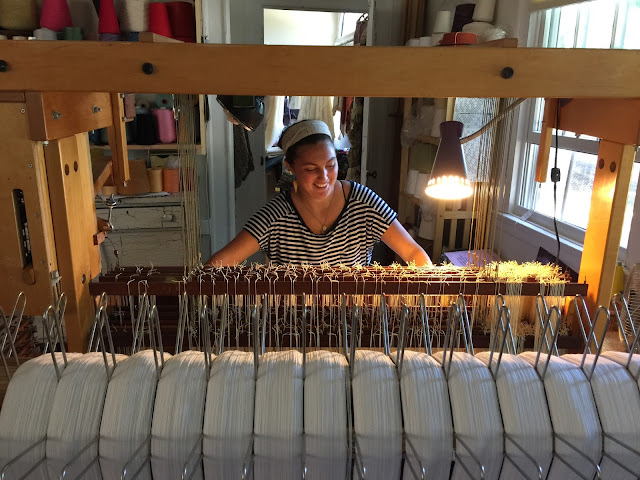 The garden is done, DONE.  As in neglected, overgrown, and embarrassingly OVER.   I went out and picked the last of the tomatoes, and opened the gate for the "girls".  They acted like I had just let them into Jungleland.
To them, I am sure it is just that.
And fun. 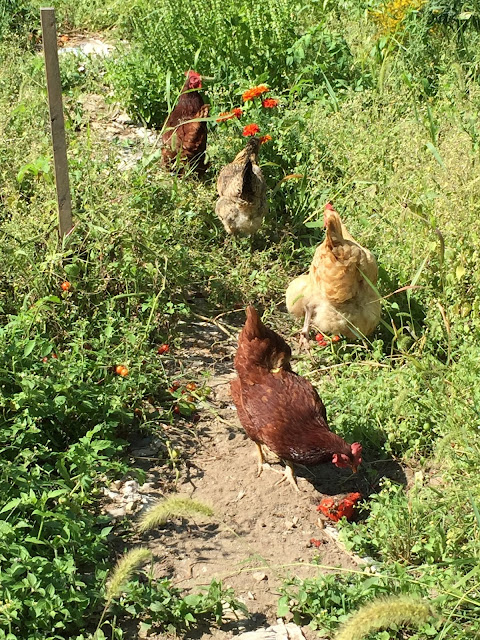 My towel stash is officially over the 50 mark.  I am getting ready for the Southern Adirondack Fiber Festival, coming up on Sept 26th, and the Hudson Mohawk Weavers Guild Show in November.  So I can't have too many. 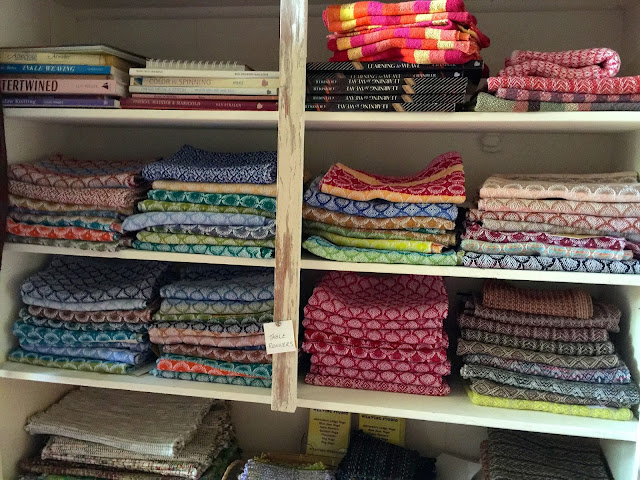 I am getting acquainted with naps.  Not sure why.  I have never been a napper, but lately, maybe the heat, or maybe the fact that I am up at SIX A.M. no matter what, but a half hour, forty-five minute nap about mid afternoon, just seems to do the trick.  Who knew?


Today, being Labor Day, Lois and I decided to do a little laboring.
So we put another warp on for möbius shawls. 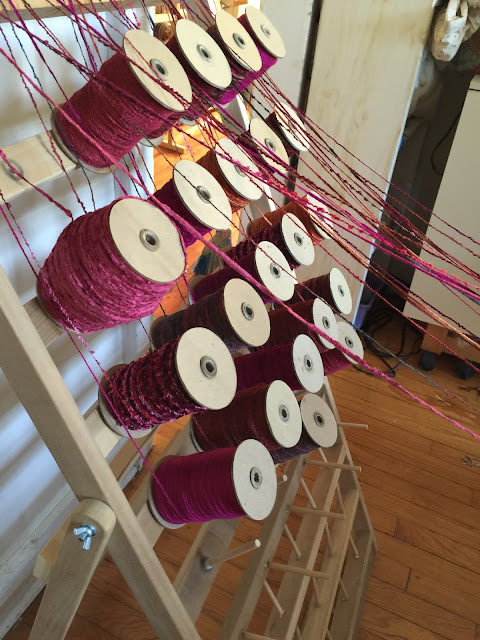 This one is going to be be SMASHING.
Of course, that's just my opinion. 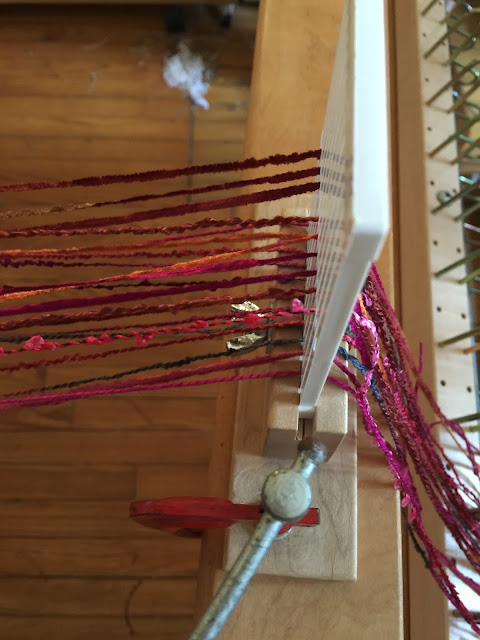 We put enough on for four shawls.
Lois tied it all on to the previous warp, and we jiggled it through.

What a great feeling to know you're ready to weave and you didn't have to do all that threading and sleying. 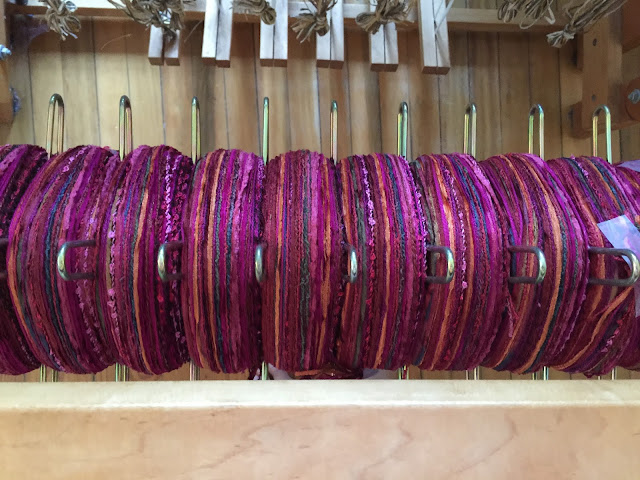 Again, I am trying to get my inventory up for these two upcoming shows.

But I'm having fun weaving them, so it is not all drudge. 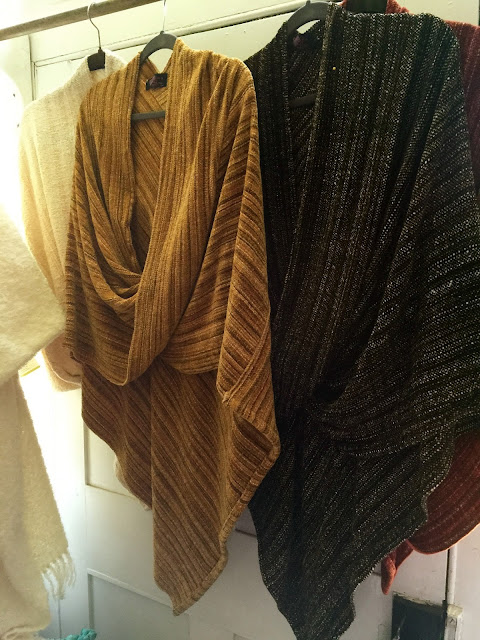 Sometimes life is hard, and always unpredictable.
You never know what you're going to get.

But for me, it's about the simplest of pleasures.
Dappled sun through the windows on a quiet afternoon.
Putting a warp on without a hitch.
Making burritos by the batch, to eat and to freeze, for about $1.00 each.

A cuppa decaf on the porch, watching the sun go down.

All the moments of daily life, making a life, being present.

Hold on to those things, hold fast.  They comfort in a way nothing else can. 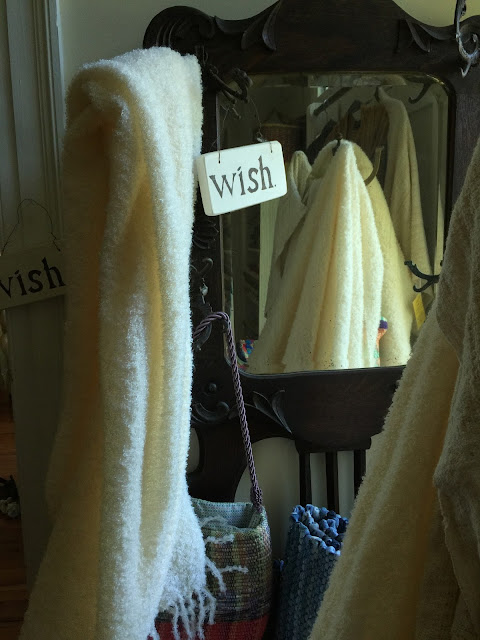 I have always been a napper. It's so good to refresh myself and then have energy for the rest of the day. I so love those shawls. They've been on my wish list for a while. I'm thinking of one with cocoa and cream with just a dash of light buttery yellow. How's that for specific ? Hope you enjoyed the weekend.

What a lovely warp, Hilary!! And a big yes to napping here...the heat has me quite fuzzy. Is this really September???

Napping is good! I did it all day today. Of course, that is not the norm for me. We got back home at 4 AM from a road trip to California. We drove straight through, 878 miles. Never again, but the kids had to be back to work.
Love your stash of towels. Fifty is a lot, but that is good for the festivals. I will be starting to get my festival-wares ready all this winter for when they all start next spring.
Love the shawl colors too!

i env you the napping ability .. i cant do it, waking up once a day is enough .. i love to sleep, i love to snuggle under the cover .. i dont love getting up/waking up .. sigh ...