Chicken Question and some moves.

You remember Vicky, right?   She was the chick with the bare neck from being pecked half to death, when she was but days old.
We put Vicks on her neck, which is how she got her name.......and she thrived.
She is almost as big as the rest of the hens, and while she is not hen-pecked, she is probably at the bottom of the "pecking order". 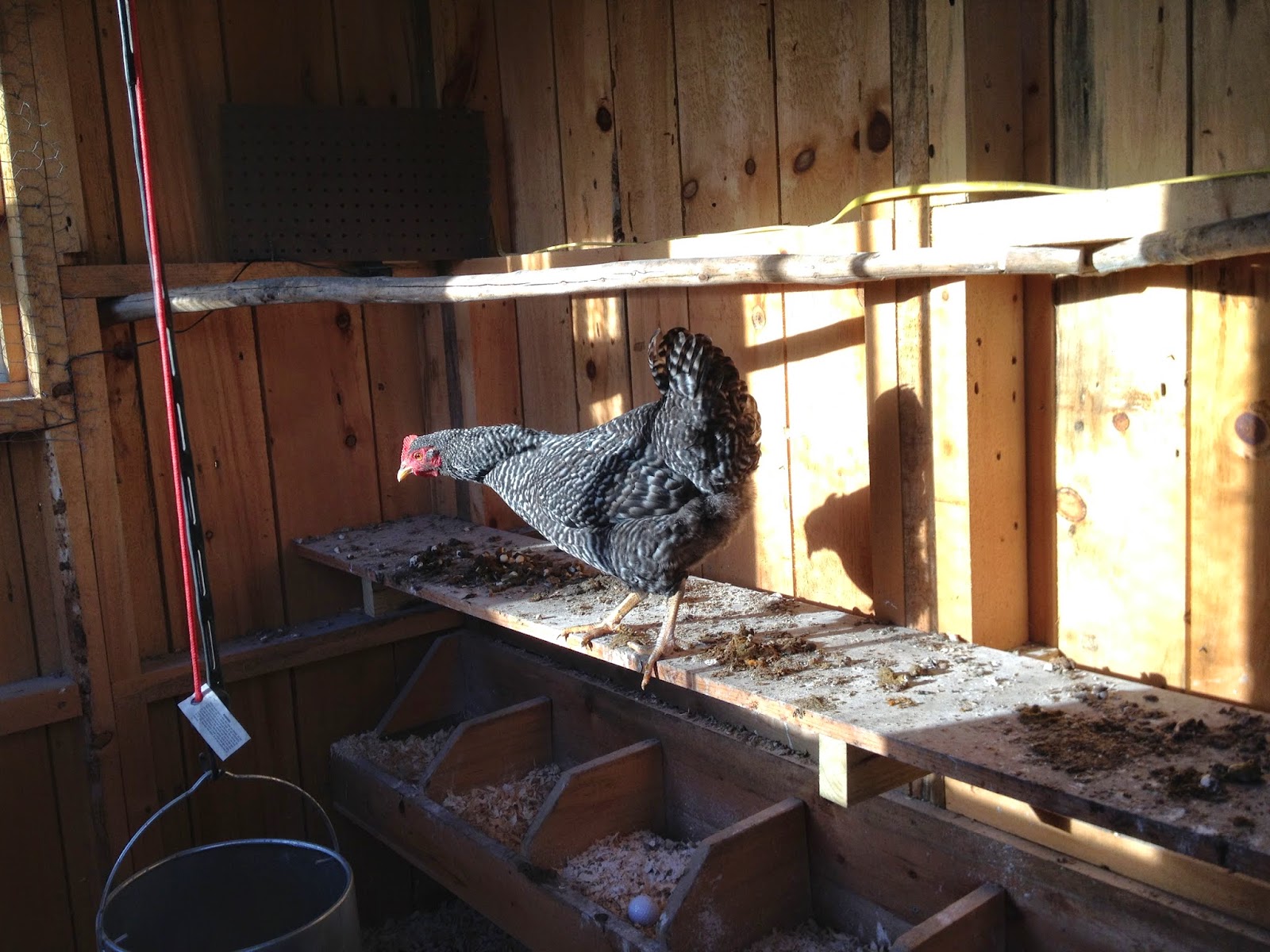 Here's the problem:  she won't come out of the coop.
She is not laying yet.
But she won't come out.  I have driven her out, but the minute I am gone, she goes right back in.
I watched her for the few minutes that she stayed out, and no one was bothering her.  So I am clueless about what has caused this behavior.   She didn't always do this.  It's reasonably new, say in the last two weeks.
I could give her to my friend, who doesn't have a rooster,  but I'm not sure that would even fix this.
1) Should I rehome her, in a "no rooster" environment?
2) Should I leave her alone, and let her do what she wants?
3) Should I take her to a "chick" psychologist?

The AVL is in its new place, where the Cranbrook used to be.  L and I managed to move it by ourselves, taking parts off it, and sliding it through the house on a rug. 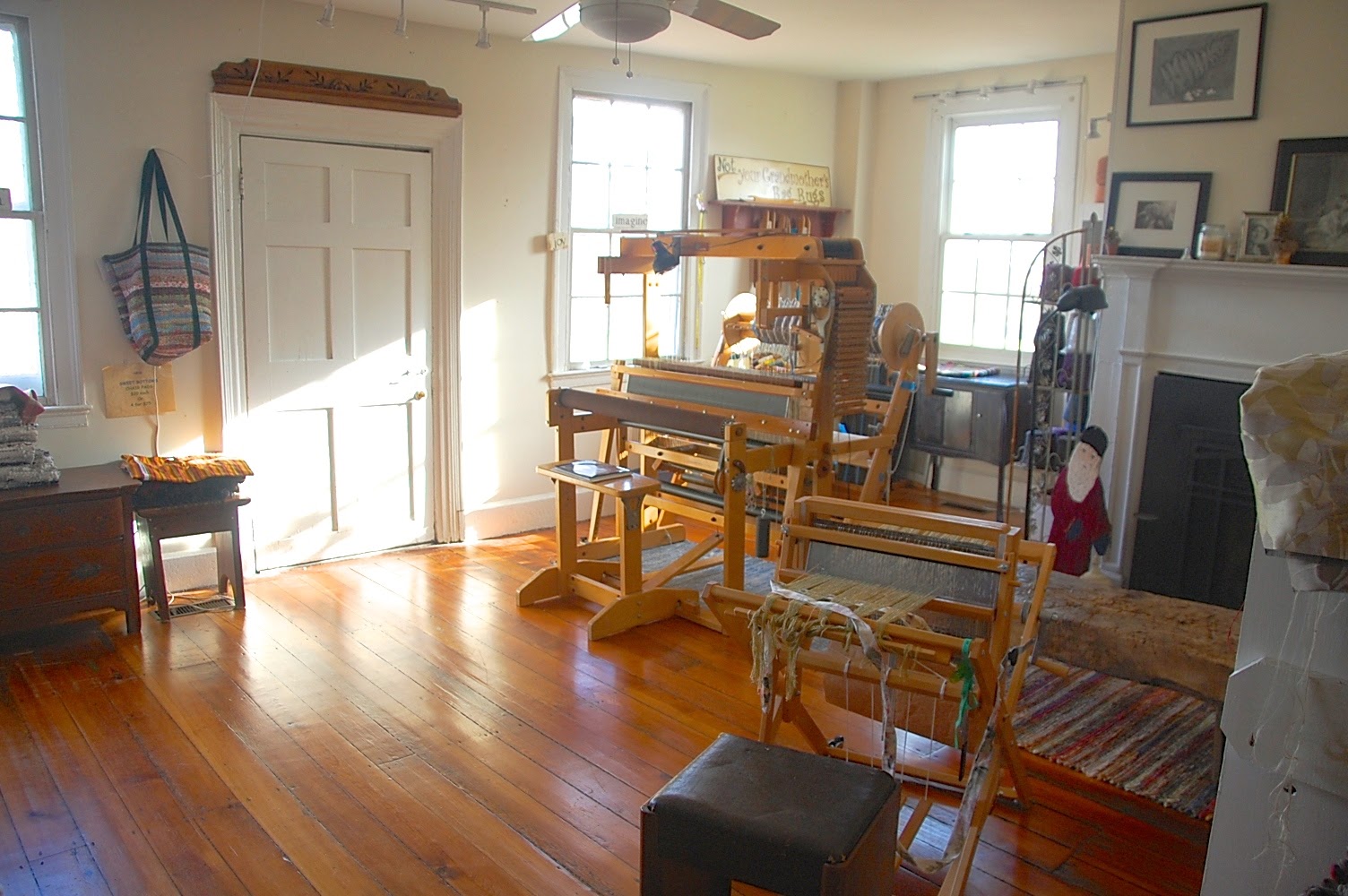 My baby blanket stash is growing.
I am very pleased with them. 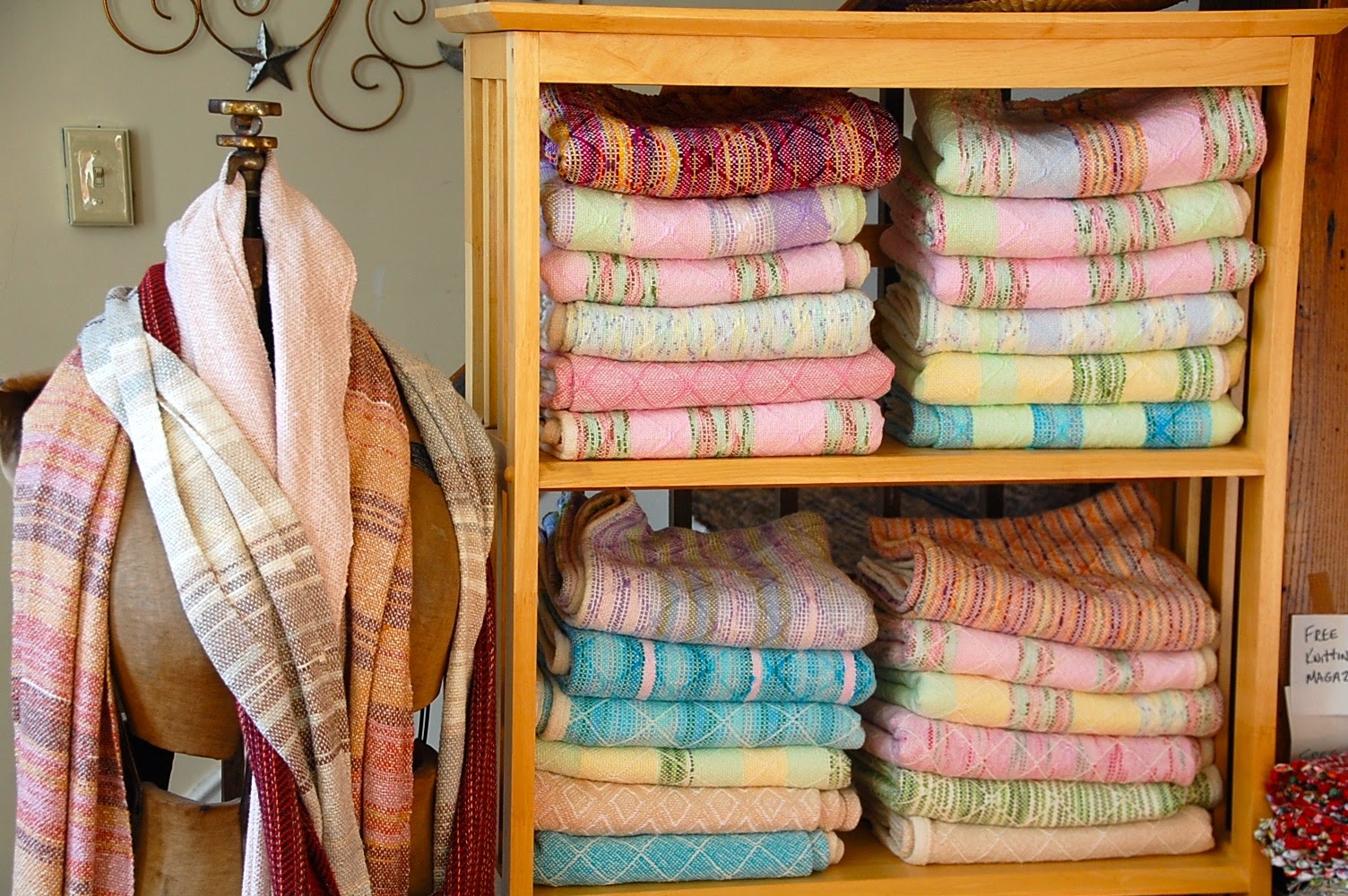 They are every bit as soft as they look. 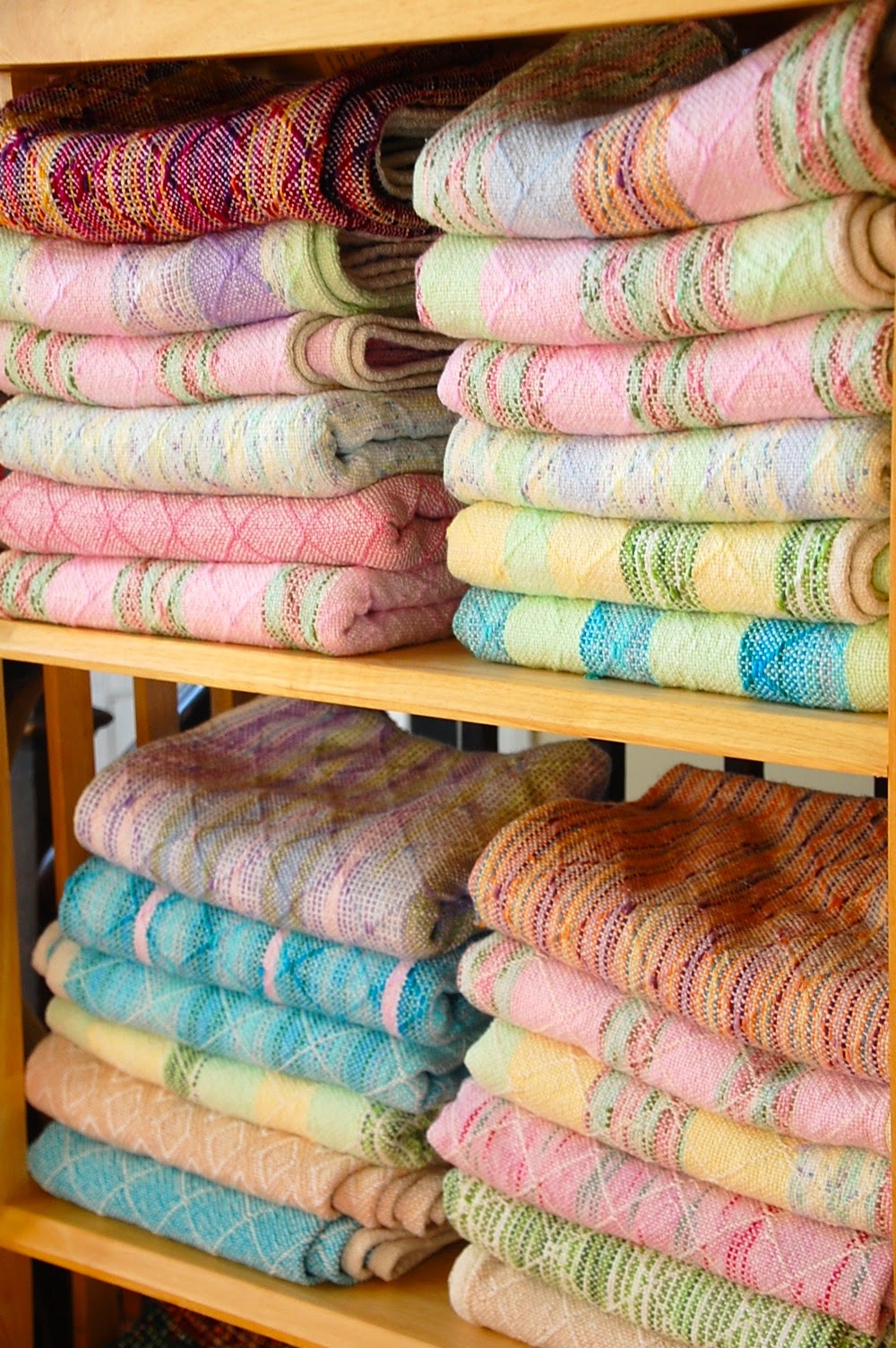 The glider that my friend gave me probably 20 years ago, or more, has found its new place, on the back porch.
It looks like it belongs there, right? 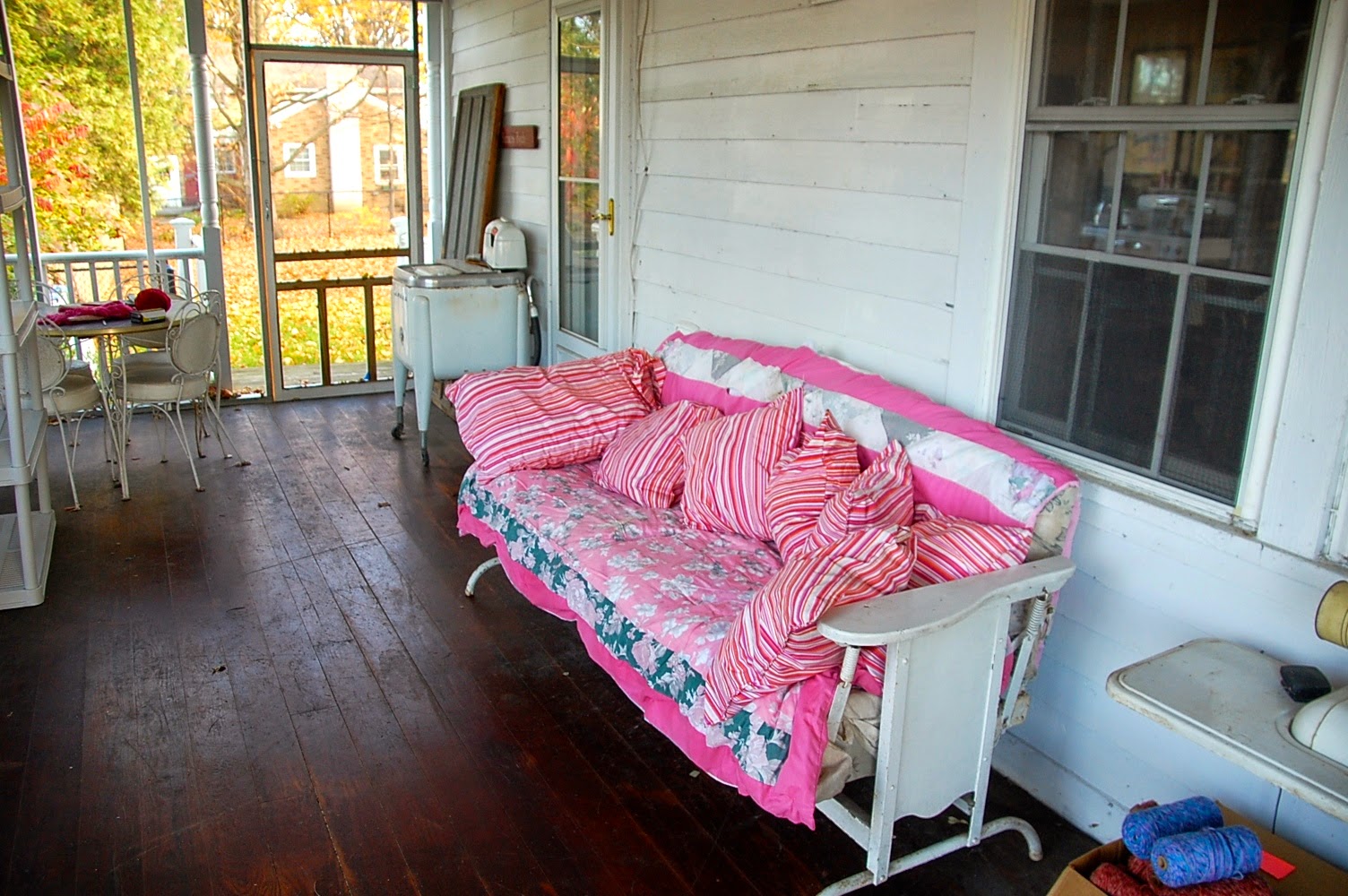 It's very comfortable.
It reminds me of being a kid, I'm not sure why. 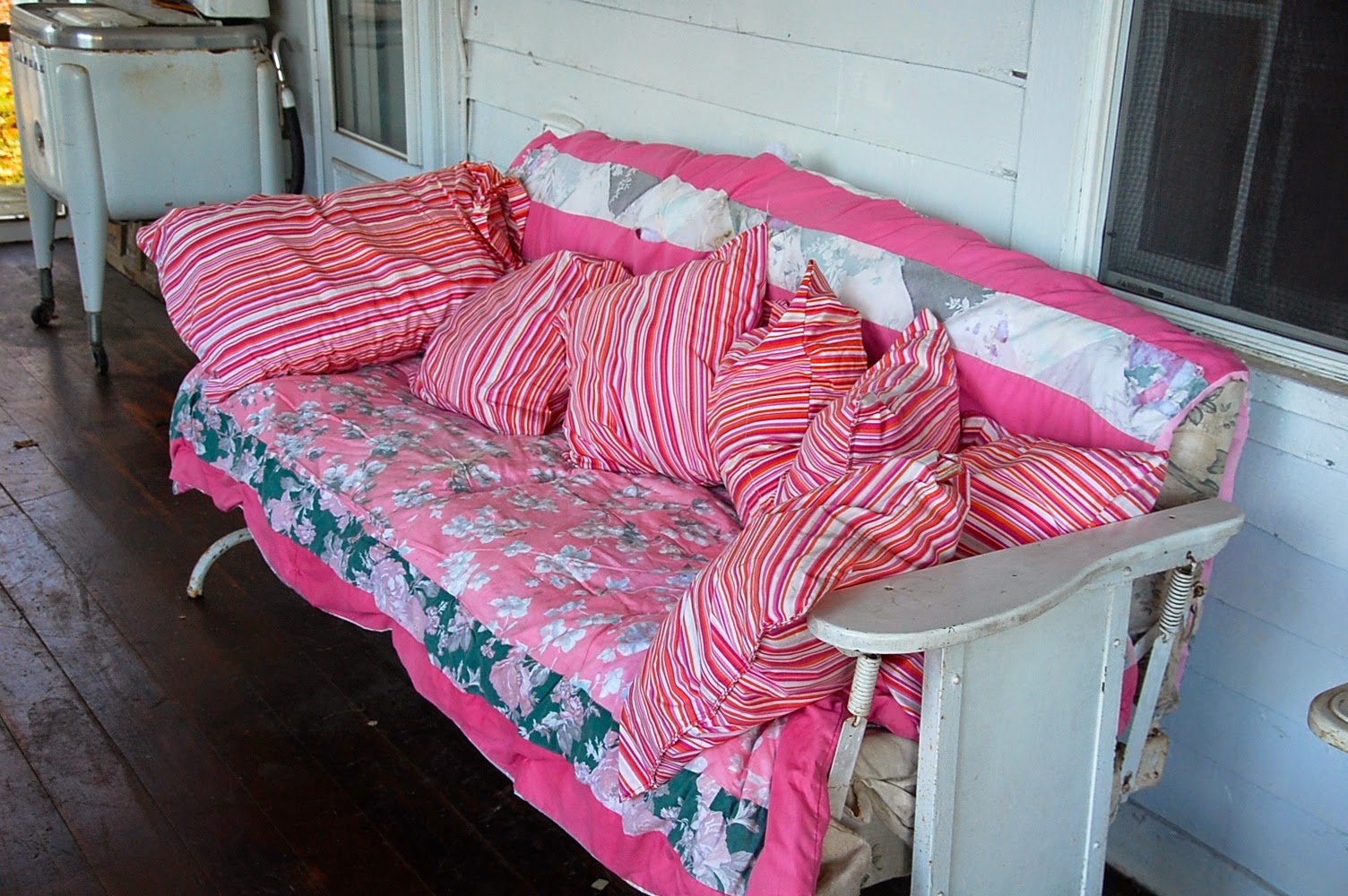 I have fallen asleep on this old glider, more than once. 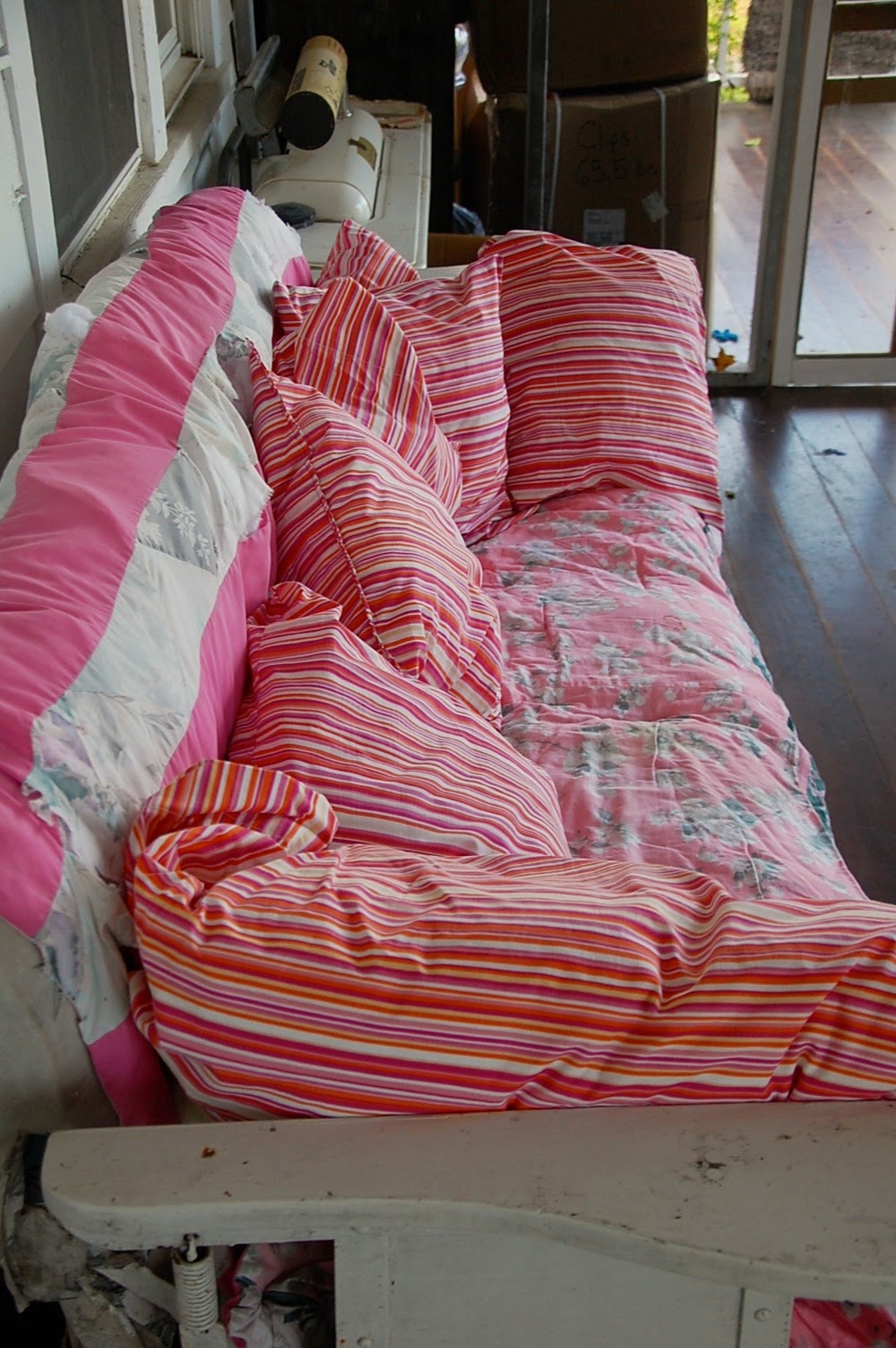 I plan on doing it again.

I vote on leaving Vicki as is so long as she has access to her food and water. If you rehome her she has to find her place in the pecking order all over again.

Yes, leave her alone where she is, but if you are really rich and want to spend money on her, take her for visits to a chicken psychologist. She could make herself comfortable in his nest while he asks her a lot of questions to get her talking. . . oh yeh, she is a chicken. It is natural for chickens to do weird things. In the past I had chickens, ducks, and geese. The geese were the weirdest by far.

The blankets are beautiful. I wish I had a wee one in my life.

As for Vicki, leave her be. Whatever caused the new behaviour might soon be forgotten. In the meantime, treat her to a relaxing movie.. a chick flick, of course. ;)

Just leave Vicki alone. All chickens have personalities and quirks that are unique. As long as she's healthy, she's fine. She's found her place and it's best not to make a big change in her chicken life.

Was the Vicks on her neck put there as a deterrent to the pecking from the other chickens?

That glider - what a treasure! I would sit there with my hubby or grandchildren and while away the hours. It looks the picture of a civilized life....

I think you are "over thinking" the chicken! Just leave her be. She will do what she wants. Sometimes mine stay in and then decide to be out! Love your blog and the house you use as a studio!

I think the rooster is terrorising her. Just my opinion though. As he gets older, he will be more dominant, and sex driven.

I just love looking at the interiors of your home, it's such a lovely old farm house.. floors are beautiful, as is the natural light that flows through.

The array of baby blankets is gorgeous! And your couch on the porch probably reminds you of being a kid because that is the only time we really give ourselves permission to just flop on a comfy couch with lots of cushions and just BE.. without all the "thinking" and guilt for relaxing. So.. do it.

There are several gliders i remember from my childhood, and sitting on one always brings back good memories. It looks beautiful there, just like a great napping spot.

As for the chicken question, i don't know about chickens. With most animals, though, if they don't seem unhappy with their current living situation, i would think re-homing them would be more traumatic than leaving them be.

The baby blankets are beautiful. As far as the chicken question goes, why not ask a person that has chickens and her own blog called "Hen Cam". Her name is Terry Goldson and she has a question and answer section. Interesting site. I'm sure she'd help you out.
twoturkey

I'm no chicken expert- well when it comes to actual birds that is- the other kind of "chicken," is debatable! I loved Karen's comments- yes- the house and the light shining through and the blankets! Is it a little crazy that even I would find one cozy I think? The softness is visibly comforting.

And the glider is my favorite!

I have a glider that looks very much like yours. I bought it at a second-hand store eons ago. It's a perfect napping spot, since it's so long. For the longest time, in fact, I used half of an Ikea foam futon mattress on it ... proof that it's the same length as a twin-sized bed. Now, it holds three patio chair cushions, and is draped with a blanket like yours is. The dogs and I spend a LOT of time sitting there. We all love it.

i opt for let her do her own thing .. whatever her issues are will be there no matter where she lives ...

love the baby blankets, wish i had a baby to gift ..

Love your concern for Vicki. As others have said she'll change her behavior when she's ready. No doubt it makes sense to her and you are not going to talk her out of it. Is she eating and drinking ok? Chickens are the most amazing creatures--smart and fellow-feeling and even interactive with people when encouraged. Great to see porch pictures in this cold weather. Love your glider but OMG is that a MANGLE???? What a treasure.