My late friend was fond of old cupboards, and this was one of her favorites.  Her daughter gave it to me, I just had to go fetch it.

It's going to live on my inside porch, and store things that don't mind getting cold. 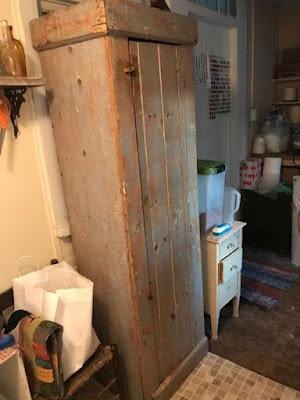 At the same time, I picked up this old beauty, that I gave my daughter a couple of years ago.  It was still sitting in her garage, and she didn't have any place for it.  So it came home.


It's very heavy, and it's not going anywhere again.  In fact, it will be a part of the estate I leave behind, and someone else can think about moving it.

Lois and I have lugged on it twice, and that's two times too many. 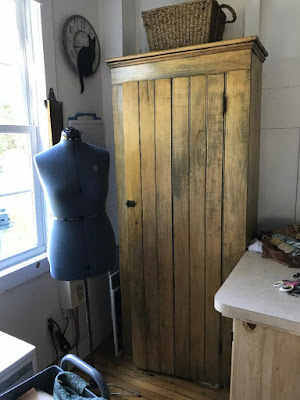 Willie has been here a month,   I think he feels pretty much at home. 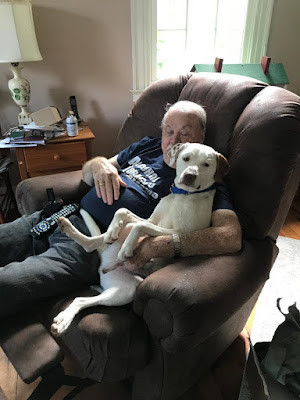 Though I will admit, that there have been moments when I asked myself WTH was I thinking?????


Some of his issues are just age related, I hope, and some are related to the lousy start he got in life.
Someone asked me WHY I adopted him in the first place.

Well, to be honest, I didn't think I was doing enough.  And that thought kept reoccurring, and I couldn't shake the feelings of guilt that came with it.
Here I am, with a huge house, and a huge fenced in dog yard, and I have one dog; when there are so many languishing in shelters.
And I'm home, most of the time.  A dog's dream.

Then I saw Willie, not once, or twice, but three times.

I just couldn't leave him there another minute.   It was a total gut reaction. 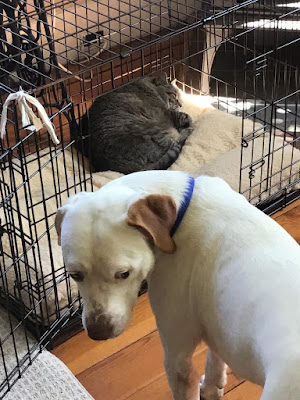 So I got the prong collar, which is working well.  Eventually, maybe he can graduate to a harness, but not now.
We also bought a crate, my FIRST ever, for those times when we have to leave, and honestly, I don't trust him not to have an anxiety attack and do some damage.  We only leave him in it for an hour, or an hour and a half, and he's doing well with it.

The most annoying thing about him is his reactivity on a leash.   Took him to the vet the other day, and at the mere sight of another dog, he lunged, and barked, and howled, and cried.   He acted deranged.  I tried to calm him down, but it was nearly impossible.

And yet, he went to doggie day care today, and he plays with a whole gang of dogs.....no problem.
I don't get it.

On the other side, he is the most lovable creature on earth.   He loves Naya, he loves kids, he loves everyone he meets.

He plays hard, and then he crashes.
Like a kid.

He is annoying, and dear.
What a combination. 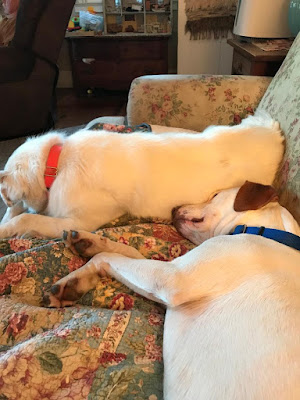 Putting together some more clothes for our last two events....one next weekend, and one in November. 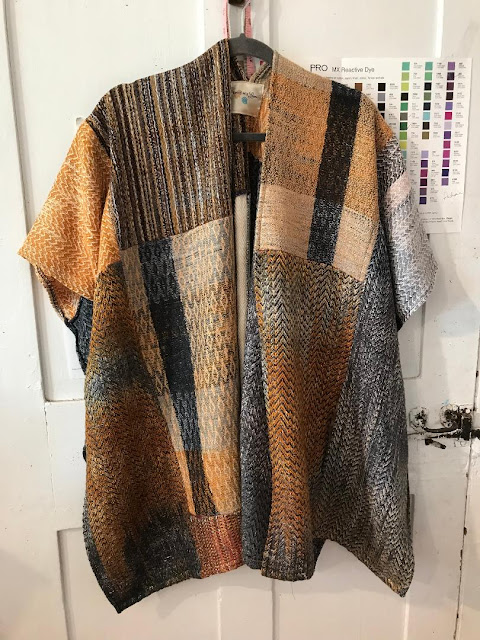 This is a Mickey cape. 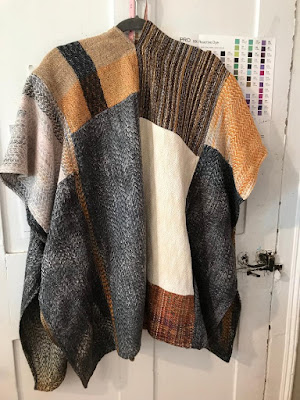 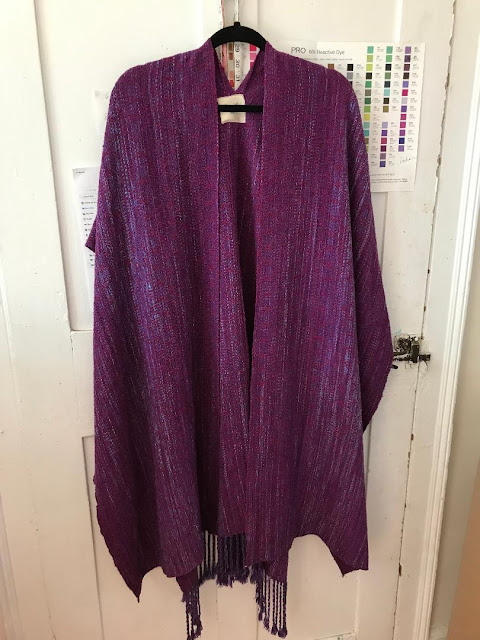 And a shorter one. 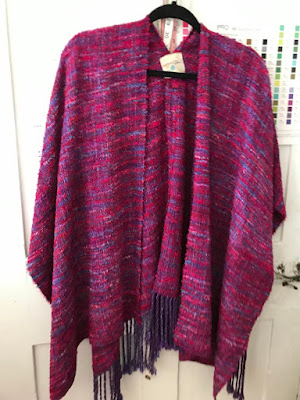 I will be glad when the frost kills the ragweed though, it is not my friend, and makes my headache so much worse.

I guess you just can't have it all.

I wonder what Willie thinks about a cat in his kennel? Has he had a bad time with crossing her, that keeps him hanging back?

Second... there are lots of good resources out there on the web. I subscribe to Whole Dog Journal and they have a free distribution by email also. The latest is on leash walking. They even have a book on the subject: https://www.whole-dog-journal.com/product/walking-your-dog/?MailingID=162&utm_source=ActiveCampaign&utm_medium=email&utm_content=Stop+Leash-Pulling+and+Dragging+with+Ease+-+Here+s+How&utm_campaign=EB20190916-WalkingYourDog

I discovered several years ago that simply slipping the leash straight down from where it is attached (under a dogs chin at the neck) on the inside of a front leg and then holding it that way makes the dog walk normal amd not pull. Something to consider. Wish someone had told me earlier.

Finally, one of my dogs has a great tendancy to pull on leash. Then she starts coughing. She's certified for therapy dog work and a coughing dog just doesn't look good in the medical setting. A very simple thing that works with her: when I clip the leash onto her collar, I lay the other end of the leash straight back along her spine. Mid point or so I hold it there with my right hand and with the left hand I circle the end with the loop under her belly, back up the opposite side, and in front of where I'm holding that point on her spine. Much simpler than it sounds. Having that loose loop around her middle discourages her from pulling at all. The only disadvantage is that people are always pointing out that my dog's leash is tangled! That's it for unsolicited advice.

Rescue dogs come with issues that sometimes we know the why and sometimes we can only guess. For us, it was giving a small treat when we leave for work. Get home it’s still there in the same spot we left it for him. We get in the door to Boxer attention overload, slobber etc and then he runs right over and eats the snack. Four years later it’s never changed. He has bad nightmares and just like a child when he has them he wants to sleep as close to one of us as he possibly can. Walking him is completely out of the question. There is something there that no one can figure out. So we get yard exercise. Love him to pieces. So glad we got him but we have those days too. The love they give back is worth it all.

The ragweed has made me feel downright SICk these past few weeks. Bleh!!...

Willie is lucky you adopted him. Some adopters would not put up with the nonsense (which is not his fault for the most part) and would have returned him. He is a love and you are letting him show you that in the ways he can.

it seems to me that Willie's biggest problem is that he was in a shelter for a long time .. and likely before that he was abandoned .. i think - Sherlock here - that the vets office reminds him of the shelter - similar smells? similar animal fear/nervousness smells? but you know what? some of our adopted fur babes have issues .. and it takes time to adjust and feel safe .. love comes easily, trust is harder

you are one special woman .. just ask those cats and chickens ..

My fiend adopted a Hospice dog that was given 8 months to live because of Lymphoma. Turns out they never actually TESTED her.. my friend's vet says it's an infection and she's been treated. The dog is an absolute love.. with people, kids, adults.. but she found it goes after cats, so she's had to put her up for rehoming. She thinks she's found the perfect couple now. It's hard and I know she'll miss her

First off, I am sorry to hear you lost a good friend, Hilary. And it is nice that you now have a piece of furniture that your friend probably loved. Those are two lovely old cupboards. :-)
Willie...oh boy. Reading about him brings back memories of our Kane. He came to me with more baggage and quirks than I knew what to do with. Sometimes I think because he was my first dog I just blindly accepted what he was knowing he needed work and moved on with it. I took him to training classes, T-touch classes,doggie daycare and he failed everything with flying colours.
He hated men with hats, didn't trust anyone under 3 ft., all dogs he hadn't share a meal with (he had 3 friends) and the black squirrel that lived under our deck that turned on him. :-b
I spent 14 years training him. phew! He improved a little and I turned grey trying. But I loved him with every fibre of my soul. Willy might seem like a piece of cake to me but I understand the anxiety you feel when they lunge and bark with teeth showing at another dog. It is very stressful. Not a joke. So I hope he can change and be the perfect fella because I'm sure for you he would want to do that.
Enjoy these gorgeous fall days. hugs