I had a busy morning, running around.  I planned to weave this afternoon, but I got a phone call.
"Mimi?"
"Hi sweet girl." (that's what I call her sometimes)
"My skiing lesson is at 1:45 today."
"Okey dokey, I'll be there."

The plan was that when she went to West Mt this weekend, I would show up and take pictures of her having her lesson, since I bought it for her for Christmas.
So being a good grandmother.......I did. 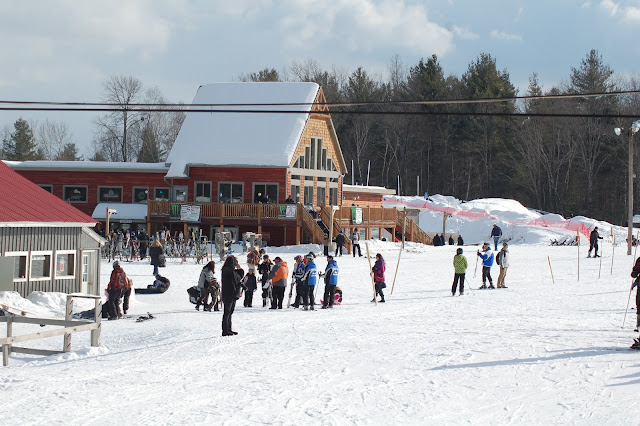 West Mt isn't the biggest around, but it is a really nice place, and today it was rockin'. 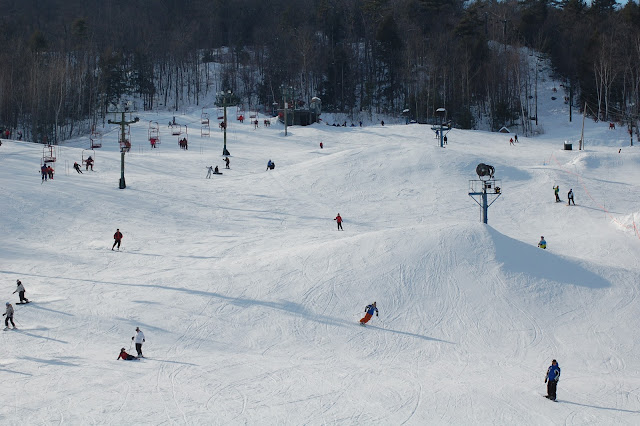 I couldn't find Gabby or my daughter, or anyone for that matter.  So I just took pictures, and looked like I knew what I was doing.
All of a sudden someone whoooooshed up right in front of me.  Luckily, I am not jumpy.
It was my 13 year old grandson, who is my height.  When did this happen???
"Hi Mimi." 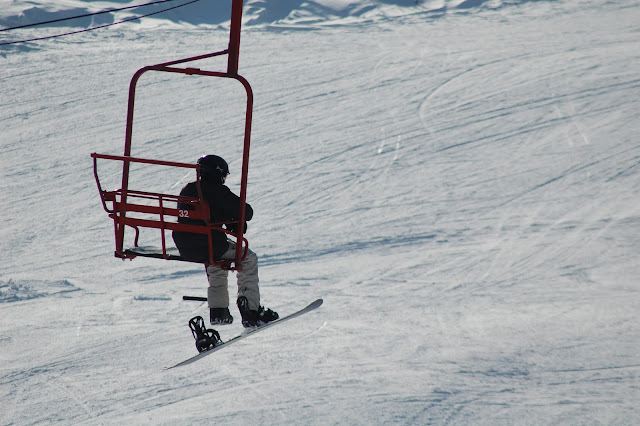 So he and his Dad took off up the mountain again, so I could catch them coming down.
Which was harder than it looked, cause everyone looks the same coming at you on skis and snowboards. 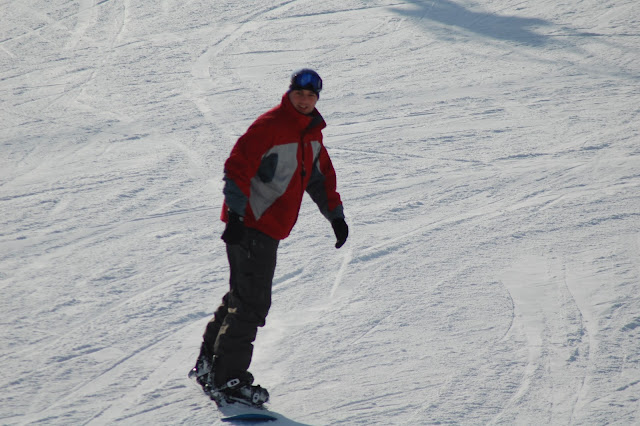 But I did manage to get a few good shots.  Of course, by this time I was pretty frozen.  The sun was shining, and if you were moving you were probably OK, but I was standing still. 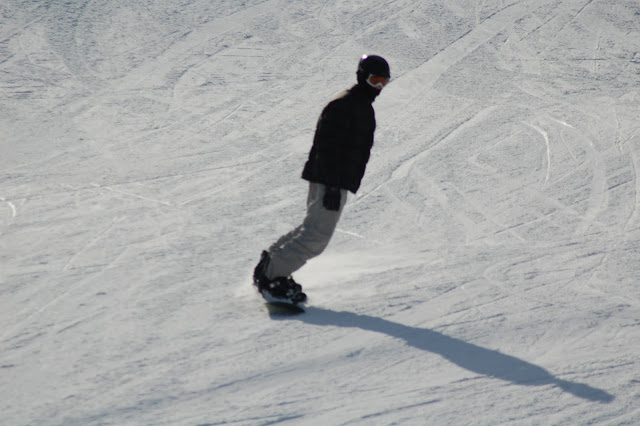 I am not a downhill skier, but the conditions looked to be awesome, judging by the people that flew by me.
I finally found Gabby, looking a little overwhelmed. 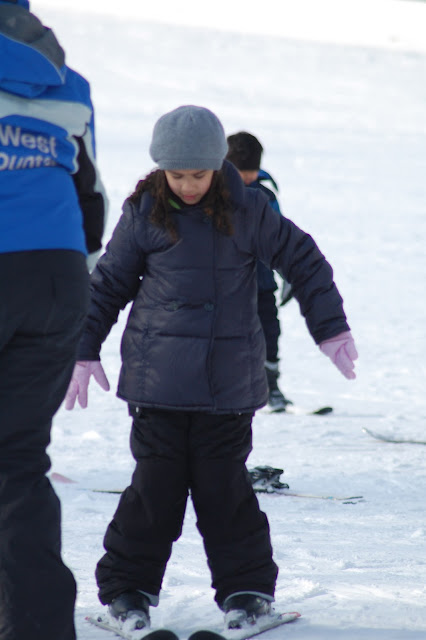 She didn't see me, she was so focused on staying upright.
My daughter looked like a pro, as long as she didn't move. 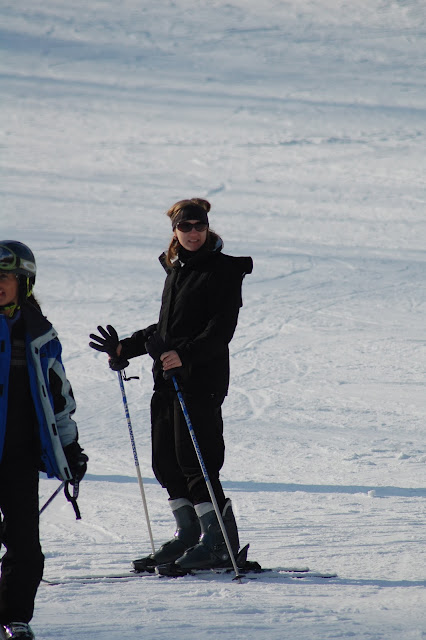 Before my daughters ever had children, I told them that my future grandchildren would have to call me 'Hilary'.  They were appalled, of course.   Which is why the minute my first grandchild was born, they designated that I was 'Mimi'......trying to head me off at the pass, so to speak.
It isn't that I minded being old enough to be a grandmother.  I just didn't want to be called "Gramma".
Sounds silly, I know.
But I think I know why.
My one grandmother came to stay with us for almost a year, when I was five, and died soon after she returned to England.  I don't remember her.  She wanted to eat me up, so my mother tells me.   I wish I remembered that.
My other grandmother, GRAMMA, lived with my aunt and uncle.   She was stricken with rheumatoid arthritis, which she called 'rheumatism'.  They didn't do anything for it back then.
She was a workaholic, and a bit of a rebel when she was young.  She was the first woman in her little hometown to drive/have her own car.  It was a Model T.  She had a speak easy in her kitchen, and her husband, my grandfather, was a rum runner until he died of pneumonia at the young age of 42,  leaving my grandmother with two small children.  For her  this was no big deal, she had already raised all her brothers and sisters, after her own mother died, and her father drank himself into oblivion.  She even had a part in a silent movie that they shot on the north end of Lake George.
But by the time I knew her, she was crippled, and nothing like that vibrant woman that she was.  She progressed quickly from a cane, to a walker, to a wheel chair.  Eventually my aunt and uncle could stand it no more, because she was not the most pleasant person to be around.  Bossy,  and unhappy with her situation.  So to the nursing home she went.
I have many memories of her, but one of them is going to the nursing home after school, cutting her toe nails and washing her feet, taking her for a walk, pushing her wheel chair up Lake George Avenue to sit on the small beach at  the end of the lake.
I longed for her to love me, but it was my cousin, Billy, one day older, that she loved.  It was him that she asked for, and his praises she sang.  Though he seldom came to see her, having more important adolescent things to do, and even though I was the attentive granddaughter who jumped and danced to her tune, ah, I was a GIRL.  And I was not that important in the scheme of things.   I never blamed him.  I knew it was her.
So no, please don't call me Gramma.
Call me Mimi, your adoring, doting, way too generous Mimi.
Gabby says, "Mimi spoils me."  And she is right, I do, and I will.  And someday, when you remember me, it won't be the way I remember my grandmother. 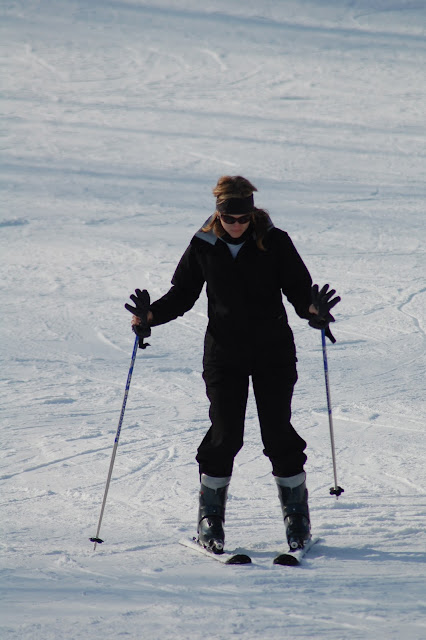 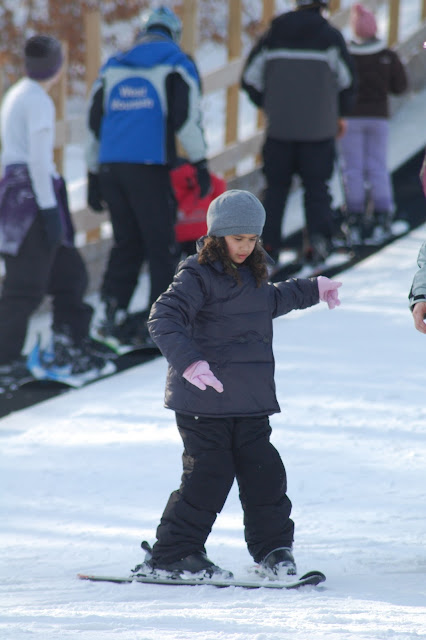 I get to go home and have a hot cuppa tea.
I think my toes are thawing out at last.

Wonderful post. From your happy family enjoying the winter wonderland to long-ago memories to those you will leave for your own grandkids. They are lucky to have a 'Mimi'...

I didn't want to be called Gramma so I had my grandchildren call me GranAnnie... they try the gramma name but I won't answer..until they call me GranAnnie.. I love having grandchildren they are straight from God.
I love the winter snow ~ sledding, walking and making snowmen.. So glad you went to take pictures.. Photos last forever, even after the snow melts.
Have a Tiggeriffic Day~! Ta Ta For Now from Iowa:)

Your grandchildren are very fortunate to have you as their Mimi! Wonderful pictures!

Lucky grands, they are. I can't blame you for not wanting to share the title of Gramma. Mimi sounds perfect to me. I'm feeling the pull of wanting to be a grandmother... if only it was up to me! ;)

Ahhh, what a fun Mimi you are. The snow and skiing looks great......right from where I'm sitting in my toasty warm kitchen.

I am Grammy Di to my ggrandchildren.

Such a full day you had! My toes would be falling off from the cold.

Wonderful story-thanks-I too couldn't wait to be a grandmother-but not a grammie or mimi-for such reasons-I'm a very,very happy "gigi"! Keep stitchin, Rain

Hey... I thought you didn't like winter... or snow? Add a grandchild and its always better huh?

(Geesh, I'm gonna rent one as its taking far too long waiting on my daughter to 'get busy'!)

So if this comment counts towards the 200 prize... I'd like what ever is the one that made you smile when it was all done. That you had fun putting together. It would go in my studio...

So now that you've embraced winter (okay one day) I should now take pictures and post my annual spring flower post.

Gabby is adorable with all the concentration. She is a much braver person than I. And you...dealing with the snow for your grandkids! What a wonderfull Mimi you are!

I just stumbled over your blog, from another blog. Had fun cruising around. Love our outlook! Your bags are wonderful. Wish i had found you sooner. There is a wonderful blogging event going on until Thursday that you can check out, but yesterday was the last day to become a participant. It's called One World One Heart - great way to meet other bloggers who mostly are artist - http://awhimsicalbohemian.typepad.com/a_whimsical_bohemian/one-world-one-heart-1.html
Blessings,
Colleen
One World One Heart #313

Grandchildrens *sigh* So far i have grand dogs and grand kitties. There's still plenty of time but I for one want a real live little human s.o.o.n.
"Mimi" is a good name. Nice ring to it.

I'm "Granny" to my four grandsons. And my eight-year-old grandson is NEARLY as tall as me already! And I'm 5'6". Guess he's gonna be a big one!

Grandkids make it all worthwhile, don't they? Yours are adorable!

I like Mimi...very much. Can I adopt that for when I am lucky enough (please Lord!) to have grandchildren? (but also..please Lord, not too soon).

Doing some catching up. My oldest grandson "named" me. I am Meme. It was actually his way of asking me to pick him up..."me, me", but that became my name to him, all the neighborhood kids (grandson lives 5 doors down) & the following 3 grandchildren. Grandkids are a blessing.