The size of things

I have had a questionable relationship with food.  My appetite has always been hearty to say the least.
I was always very active, so it was never an issue.  I ran, I worked, hey, I was YOUNG.

For many years, I didn't notice it, my metabolism seemed set high enough to burn off what I put into my body.  But as I got older, I began to get the extra weight around the middle, and Lord have mercy, I looked "matronly" even to myself.
I avoided mirrors.
My profession somewhat contributed to my gain of weight over the years.  As an RN for 30 years, I wore scrubs, and because I worked in a prison, I made sure they were as baggy and loose as I could get away with.  Let's just say it was easy to ignore those extra pounds.
I would appease myself by telling myself that I was no where near as overweight as that enormous person I saw at the grocery store.
But does it matter, really?
I knew, and have known, for some time, that I needed to lose it.
Seven years ago, I did.  I went to Weight Watchers, and dropped 20 lbs.  I felt great, got into all my clothes for the first time in a long time, and was quite proud of myself.
But it has creeped back on, plus another 5.  My excuse, probably not a bad one, for the last 2+ years, was that I couldn't deal with the headache, AND a diet.  It was just too much to ask of myself.

There were times, when my headache was so bad, I sent DH out to buy a bag of Cheetos for me. A big bag.
It didn't help the headache, but it made me happy regardless.
I didn't share either, by the way.
Being a vegetarian does not mean that you will get thin...in fact, I find that I eat more carbs than I ever did, to make up for it.  Not good.  Not good at all.  Occasionally, I consider eating meat again, but I just can't get myself there either.

I have researched so many options.  The internet is full of diets, and plans, and theories. But since WW worked for me before, I see no reason why it won't work again.  The trick, for me, is not to think about it as a diet, but as a change in life style.  It is about being cognizant of what I put into my mouth.
My daughter said that she read someplace that exercise is just the tip of the iceberg, the bulk of the issue is what you eat.  I believe that.
I know that I don't want to get obsessed with some new fad that won't last.

Since I am not a meeting person, I joined WW online.  There's a free APP for my phone, and I can track what I eat, and find points values no matter where I am.  I have been doing it for three weeks, and I have lost 10 lbs.  It works.  And honestly, it really isn't that hard.  It is just MINDFULNESS about food.
I still go out for pizza on Friday night.  I just PLAN for it.  No more willy nilly, eating whatever is in front of me.
Paying attention.  That's my game.
My 50th class reunion is this summer.  My lifelong friend and I have decided that we are going to look "mighty fine" for our age.  Not to impress anyone else, hell no.  Just to impress ourselves.
Just to feel really good about our weight, for once.
I am also tempted to buy (5) 5 lb bags of sugar, and put them somewhere  where I can see them often.
Because that is what I've been carrying around.  10 down, 15, maybe 20, to go.

What really clinched it was a photo that my daughter and I took while I was in Florida.  We were sending it to my son in law, to make him feel bad that he wasn't there, in the sun, drinking his favorite beer, Kalik from the Bahamas.

Against every fiber of my being, I would much rather ERASE it.........I am going to share this photo with you.......because in a few months, I am going to be sharing a photo of me WITHOUT that spare tire.
I PROMISE.
Nothing like putting yourself out on a limb, eh???? 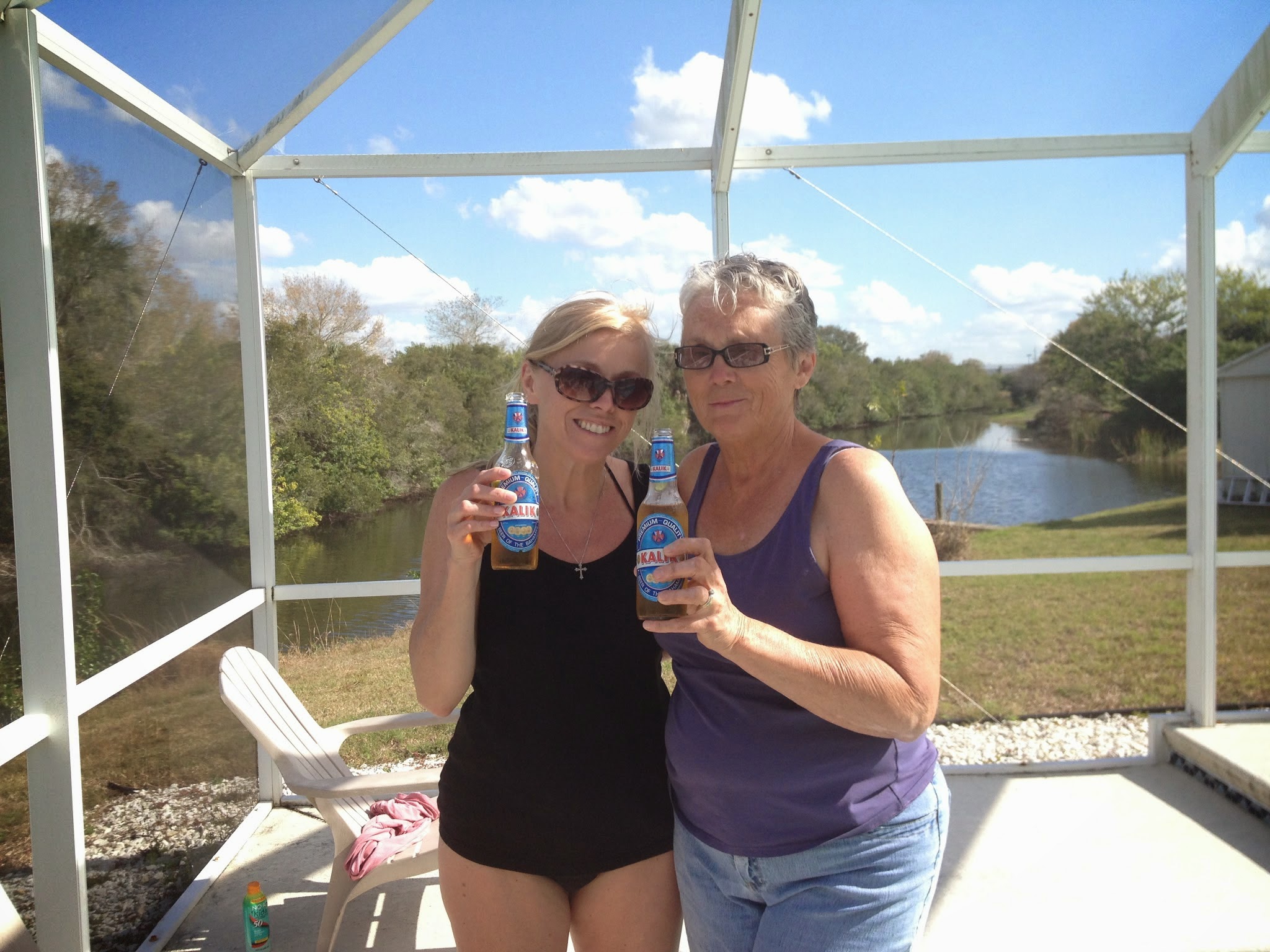 Yup, I am ok with getting older.  What point would there be NOT being ok with it?
And I don't mind the wrinkles, and the hair getting whiter by the day.   I put up with the achy joints, I know that's just part of the whole picture.
But the ghastly weight around my middle......well, I don't have to put up with that.  THAT, my friends, is up to ME.

I am on a mission.

I may be getting older, but I am also getting thinner, if it's the very last thing I ever do.

And no, I am not a big beer drinker.  I would never give up points for that.

You are the most determined person I have ever met (albeit on-line) so I have no doubt that you will reach your goal. You go girl!

YOU are such a fine inspiration….heading to iPhone to find WW app. TY, dear one.

I feel the same way.. and we are taking a family portrait while on family vacation this summer and I do not want that spare tire. SO... here we go.

Thank you for sharing, I don't feel alone :-)

Same thing happened to me a few years ago, and I got an app called "Lose It" for my iPhone. It made it easy to pay attention to what I was eating, and now, two years later, the 15 pounds is still off. Although I rarely comment here, Hilary, I always read your posts when they pop up in my reader. Your bravery always astonishes me, and yeah, I would have shredded that picture, but you are much braver than me. :-)

Congratulations on making the decision, and doing so well so far. It's an investment in good health you will never regret.

Yep. I hear ya. I've gained far too much weight this past year and it's all around the stomach, sides, butt... you name it. Time to get serious here in Virgina as well.

I love Weight Watchers! I became a member back when you had to eat liver once a week, tuna, make your own ketchup and flour out of dry bread crumbs, not the good old days! I have even become a lifetime member! I need to take care of myself and go back this week! I need some good vegetarian recipes to use once in awhile. I'm not a big beer drinker but one day after a bad day teaching first graders I announced I had 18 points left I could use them on quite a few light beers!

I am a life time member of ww. But working full time, I no longer exercise the way I used to and my weight is almost to my starting point.
I like the app idea.. don't want the meetings.
Like you I embrace aging.. going gray is ok with me, but not fat. Hate it... thanks for the inspiration!

Thanks for the nudge! I have just been diagnosed with MS; it is going to change the way I do things but I want to do something about my weight! 15 pounds have just settled around my middle without my permission. I am going to dispose of them the way I clean out a closet-its out of here! Hope you feel better soon, Hilary!

Oh I hear you.. I have way too much hanging over the waist band of my jeans.. and far too much filling them out, also. I think you're sending a few of us in the right direction today. Ten pounds in three weeks.. I'm impressed.

Yay! WW is the best way of life eating plan there is ... i lost 25 lbs on it over 25 yrs ago when i stopped smoking .. i have gained back only a few pounds 7 to be exact ... i keep losing 3 then regaining it .. but i decided that i just cannot stand the way i feel when my pants are tight .... so its interesting to read your post and see we're on the same quest armed with the same ammunition tho i am going to do the 'old' diet i cant do exchanges or counting .. i know i need to eat 3 oz of protein 3x a day, 3 helpings of salad or veggies, lots of water and 2 pieces of fruit .... and i will

I applaud your strength to reach your goal; something I've been lax in with excuses of travel and work. I'm making major changes too and when I return from California I'm beginning the 10-day Smoothie Cleanse. Not so much for the weigh loss, but just to see if I'll feel better and have more energy. I can't wait to read about your progress dear friend, XOXO

About five years ago I was in for my annual visit and asked my GYN why my waist was growing when I hadn't gained any weight. I don't like that question - do you have another? he quipped, then added - It happens to everyone and no one likes it. I am that same weight today and yet my waist is now greater than my hips. There must be a physiological reason but it beats me what it is. You'll feel better without the 20 pounds but don't count on getting your waist back!

To me, you look pretty darn good. I admire your determination to make changes that you believe are what will be healthy for you. I have much more weight to lose than you do, and now maybe I will check WW online too.

I've been struggling with my weight a long time. To me, you look great, but it's how YOU feel that matters.
Maybe I need to give WW online a try.....I gotta do something.
Exercise alone isn't doing it. My fiber job is mostly sedentary. Need a jump start. You are MY inspiration! Thank you.
Martha