I should be on the river. 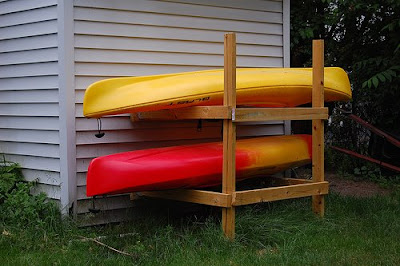 Here are my kayaks, waiting for their first trip up the river. My husband made this great rack for them behind the house.
I have been chasing my tail all week, but finally, my mother is home from the hospital. She had a cardiac cath, and then a stent, and hopefully, she will even be compliant with the medications they gave her.
I have to get ready for the LARAC festival, right here in Glens Falls, in the city park. It is a two day juried show, and I mostly do it to just promote the studio. I quite often get custom orders from people who see me there......sometimes months later. And it is a good thing to let local people know where I am. It is a pretty good advertising venue, and if the weather is good, it will be a good weekend.
This year I am demonstrating, so I have to put a warp on my Baby Wolf, something that I can weave away on during the two days. That will be a challenge, to demonstrate, and run the booth at the same time. But I will just do my best. I try not to get wound up about those kinds of details, figuring that they usually work themselves out.
I think I am going to do some 8 harness towels, if I can get my brain to quiet down. It has just been one of those weeks....worrying too much, having a crazy schedule, and not having two minutes to myself to just settle on anything. It doesn't make me feel very good, I have to say.

Update: I heard some screeching early this morning, outside the bedroom window. It was 5am. I got up and came downstairs, and went out on the back porch. In the next back yard, I saw the momma kitty, lying in the grass, and this scruffy black cat was circling her. I am afraid she may be in heat already.
Later, I saw her kittens, the two that are left, jumping out of the bushes. I took some food, and some milk out to them. As soon as I was out of their site, they came out and devoured it. So, the plan is, to feed them all this week, and not bother them much, and then put the Hav-a-heart trap out there covered with brush, and baited with some really smelly fish cat food. I want to catch the kittens, but I REALLY want to catch the momma kitty, and get her fixed before she has more kittens.
I wish people would be more responsible. I really do.
My husband said today that there were feral cats outside of OTB, and that someone made them a shelter out behind the building. I said, that's great, but how about catching them, taking up a collection, and getting them neutered???? How about that for an idea???
Is it me? Or are people just generally clueless about the long term effects of doing NOTHING.
Sorry, I could stump my way across America about the plight of homeless dogs and cats in this fair country.
If I weren't running a weaving studio, I would likely be the local cat lady, or the local dog lady......you know, that nutty old lady that has a houseful, and never turns one away.......that
would be me.
Instead, I have the two cats that are pretty famous on this blog, and Eddie......my prince.

As I was making dinner tonight, the phone rang. My best friend, since I was five, fell today and broke her hip. So back to the hospital I went.....I have been there a lot this week. My husband and my mother had dinner without me, and I stayed with my friend til they got her moved from the Emergency Department to the Orthopedic floor. She was in a lot of pain, and faces surgery as soon as they get her medically cleared.
I finally got home, had some dinner nuked in the microwave, and some rhubarb cake.
Nothing like being home after a long day, rhubarb cake, and a cuppa tea.
Priceless. 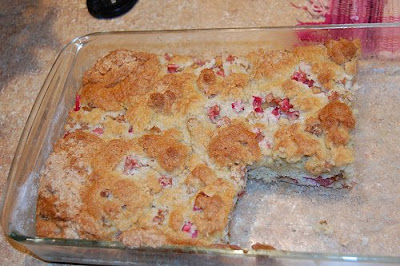 Amen!!! I'm with you when it comes to irresponsible pet owners.

Sorry to hear about your friend. She's lucky to have you looking in on her!

Selling and demonstrating. You'll be busy and lets hope sell a lot. Have fun.

You have a lot going on....I hope everyone's health issues resolve as quickly and well as possible.

Even though I love to kayak, last year I didn't get my boat on the water at all. This year I'm trying to make up for that I guess!

It's so hard to strike a balance sometimes!

My daughter's family has been letting the affectionate neighbor's cat into the house - they already have adopted two pound kitties - and then one morning the neighbor's cat had kittens under my granddaughter's bed. They're trying to find homes for the kittens, get the mama fixed and find homes for two of the babies - they're keeping one. I told her she doesn't fit the cat lady profile. Hard to understand why the neighbor didn't fix their cat in the first place.