Yesterday was a quiet kind of day, as my three children were otherwise engaged.
It was different, as we usually get together on Mother's Day, but this year it just didn't work out.

I read someone's post on FB, about not being appreciated on this holiday, and someone else's comment about how the day was fraught with expectations, her exact words were "an exercise in unmet expectations".   Another comment said there was too much pressure to have a "nice day".

At any rate, I had made a plan in my head, that I was going get some things done, and have a nice, uneventful, productive day, and that I wasn't going to get sucked into that vortex of feeling bad because the day wasn't Hallmark card perfection.
It was OK.

So the very first thing I did, was the thing that had been on my mind for a couple of weeks.  I cleaned the outside porch.
I sent my daughter a photo, with the explanation that it was as good as I could do, given that Bubbalee's heated bed is under that table, and her "chair" is an ugly, green recliner that she spends 16 hours a day in.  And God knows, I didn't want to upset Bubbalee's routine, little diva that she was. 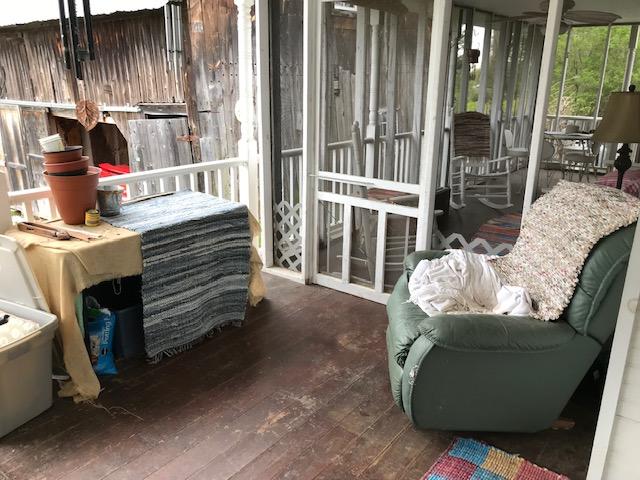 More than ten years ago, Bubbalee appeared at my house.  Wild and untouchable. 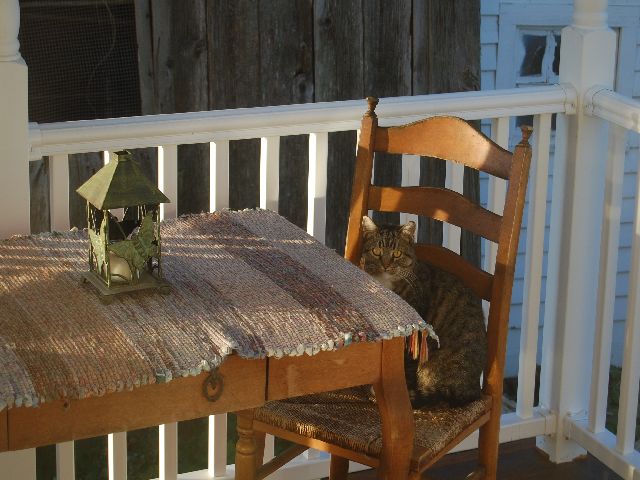 She lived in the barn, and had two litters of kittens, which we caught and found homes for, before we could catch her and put an end to her childbearing years. 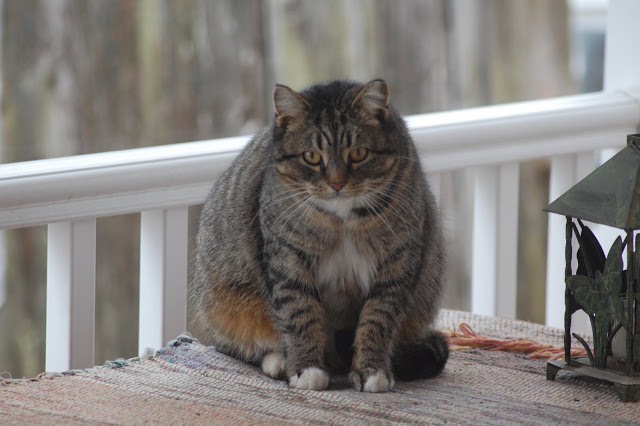 She lived between my house, and the neighbors, until a few years ago, when she chose to  permanently stay  at mine. 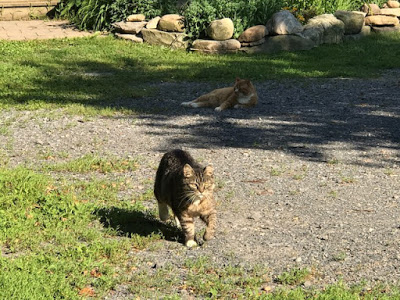 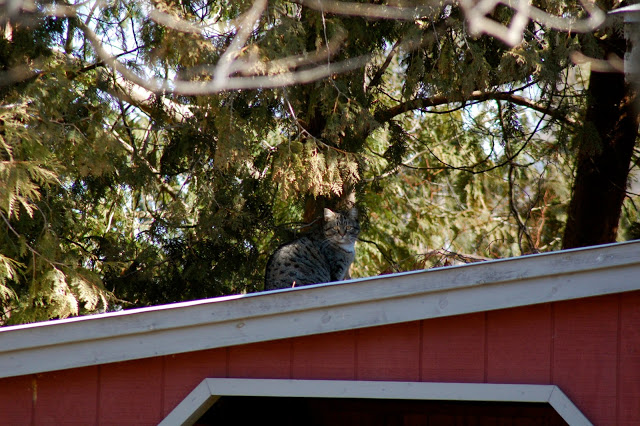 She had very distinctive white socks. 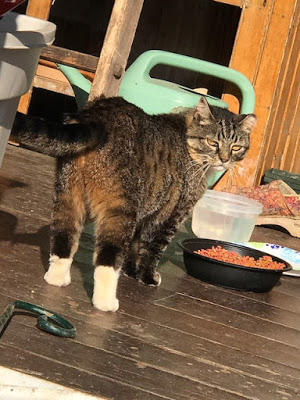 Here is she when she was very pregnant for her last kittens. 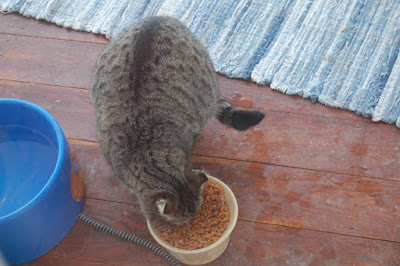 In the solar house. 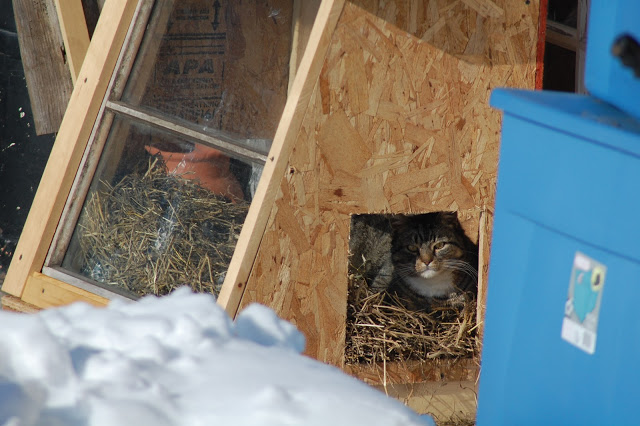 In the last couple of years, she has stayed very close to home.......she never wandered far from the house, the labyrinth, the chicken coop, the barn.
She met you when you got out of the car, she followed anyone who was outside.
And after years of being fearful of any human contact, she finally decided that she loved attention.
And she got it, from everyone she saw. 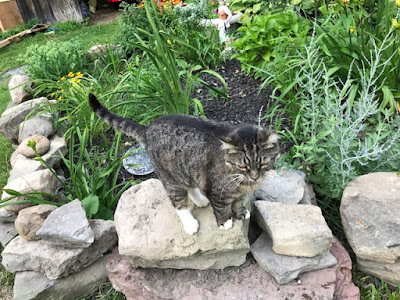 She loved to be petted, but never contained.   When I tried to put her in the cat carrier to go to the vet, I ended up in Urgent Care with an infected hand. 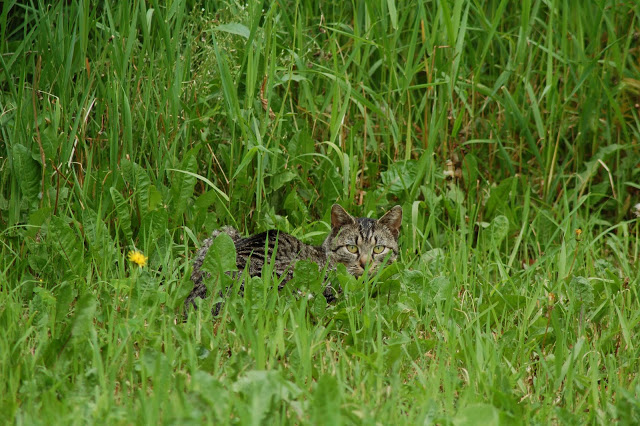 But I forgave her.   She just lived life on her own terms. 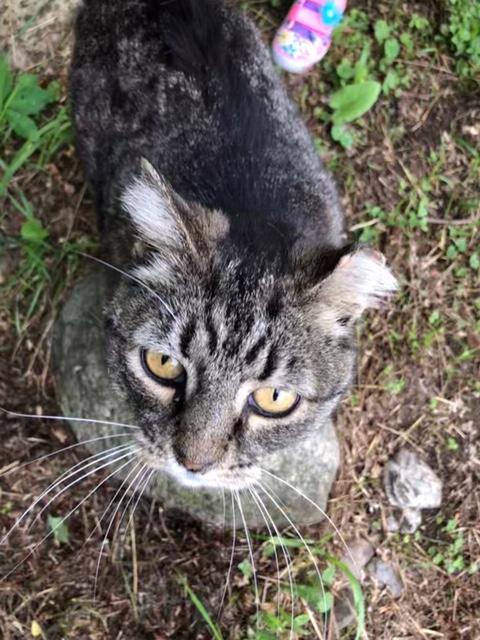 I have no doubt that she was happy here. 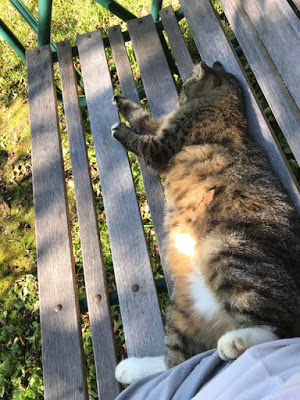 She ended up being very loved, and loving us right back. 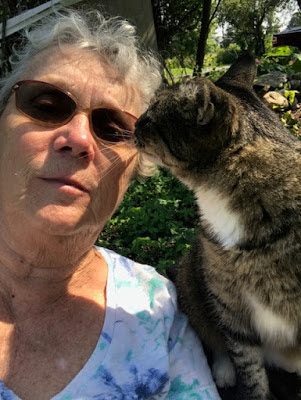 And she was very vocal. 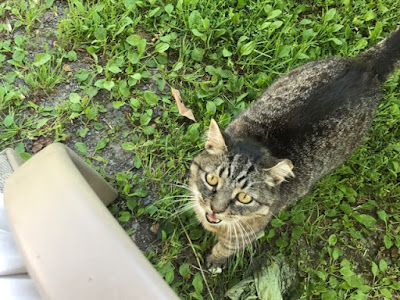 Dale loved  her, called her Bubbalicious. 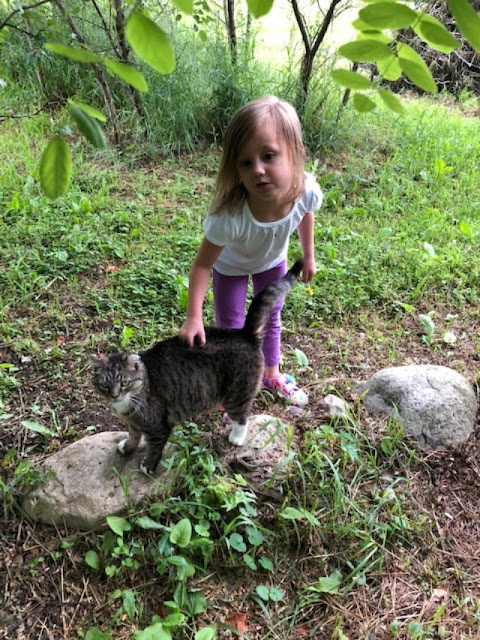 Cooper followed her around. 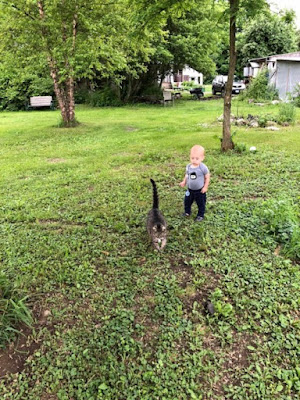 Ava wanted to take her home. 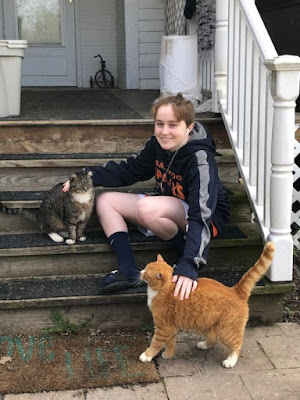 Last night, when we came home from dinner, she was laying in front of the chicken coop.   Because she was quite deaf, I reached down to touch her, and that's when I realized that she was gone.

I don't know what to say.

Bubbalee.   We will miss her so much.  She was part of our days, a constant presence.

I woke up this morning, and my first thought was, oh my God, Bubbalee's not out there.  When I went out to feed Goldie, it felt so strange.

I am pondering how quickly life can change.  In an instant.   We don't, and can't, know the future, on any given day.

Which is why, once again, I have to remember to "stay in the day", to make it a good day, one that resonates with me.  One that registers on the good, the plus, the positive, as much as possible.

It is truly all we have.

At least you know that she had a good life, on her own terms, and went peacefully. What more can any of us ask for? Sending tears and hugs.

Oh my dear friend, I'm so sorry you lost your Bubbalee. :( You have given your loving home and heart to so many creatures, and long may you continue to do so. I know it doesn't hurt any less but please remember that you gave her a life of love and contentment. Hugs to you. <3

While I wipe my eyes... she had a lovely life with you and a peaceful end. Console with that.x

I feel for you and your family losing Bubbalee - it's just as hard losing a 4 legged family member as a 2 legged one. She had a wonderful life with you.

I am so sorry to hear of Bubbalee's passing. I've loved reading your blog over the years and appreciate what great care you take of strays. She will be greatly missed by your readers too.

I remember when Bubbalee came to live with you...and all you did for her through the years. You were both lucky to have each other. Hugs!

I remember Bubbalee's story and it's hard to believe it's been 10 years!... the gift in the ending to her story is.. she had a peaceful life on her terms and what appears to be a peaceful end. You were all so good to her.

I don't fret over the days that aren't Hallmark when we're told they should be. Every.Single.Day on this earth is a gift, I have truly come to feel that. It is what we make of it.

Please accept my condolences, it sounds like she was an amazing cat, and no matter how long we have our much loved pets, it's never long enough.

I’m so sorry about Bubbalee. I’m so blessed to have gotten to know her. She was always in that recliner when I went out to partake in my nasty habit of having a smoke. She would always let me squeeze into that recliner with her and give her some love while I was out there. She will be missed.💔

she had a really good life she was no dummy, she knew your house was THE best forever home .. i know she will be missed .. hugs to you and to your grands, especially Cooper, who will surely miss her too

Oh, I think I'd like to sit in that ugly green chair for a while and be surrounded by the diva's presence. I'm so sorry you've lost your pal. She was truly loved and cared for.

Bubbalee will be missed. I loved hearing the stories you shared about her! So sorry for your loss!

So sorry you lost your Bubbalee. She was a lovely cat. They become such a big part of our lives. Hugs.