Mostly I haven't been blogging, because I have been overwhelmed with my life.

I don't know why that's so hard to admit, but it's the ugly truth.

The headaches, three years later, still rule.  How is that possible???

The most recent MRI shows no bone growth, and my Skype last Thursday with my neurosurgeon  did not give me any answers.  The good news is, I guess, that my doctor says my MRI looks good.
He doesn't think my headache is being caused by my Chiari, my surgeries, or regrowth of bone.

He is stumped.
Oh, good.

He suspects that my sinuses are somehow involved, so he asked me to use an Afrin spray for 4 days.....to see if I got relief.
I didn't.
In fact, I had the worst headache EVER.

But I am willing to pursue the sinus issue, and have an ENT appt in two weeks.  I am not giving up, even though some days it feels like I want to.


Today was a sunny fall day, and I had one project that I have wanted to do for a while.

I wanted to get my chickens to clean up my garden. 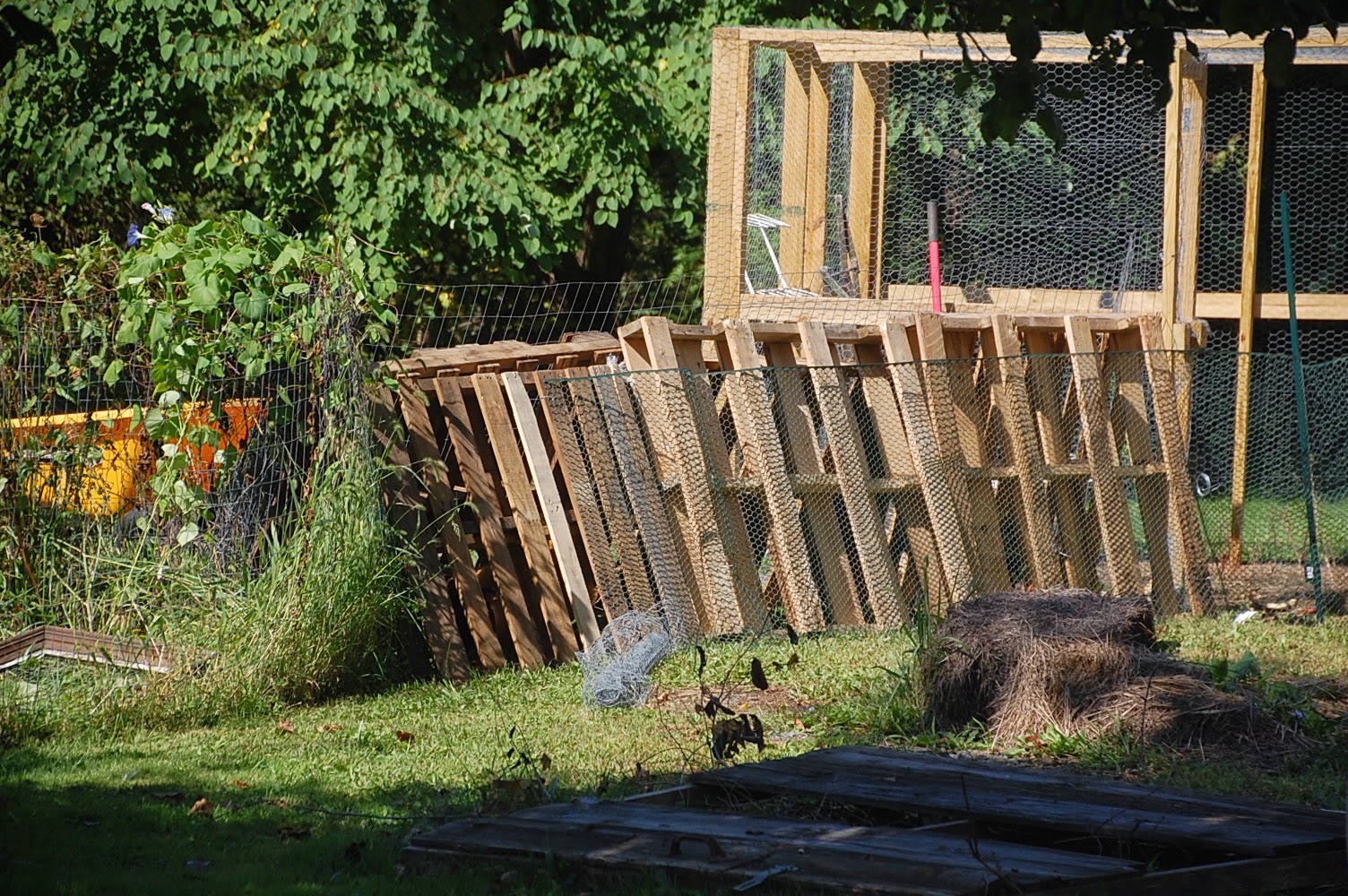 Lois helped me, and we made a "tunnel" out of some pallets, and some leftover fencing. 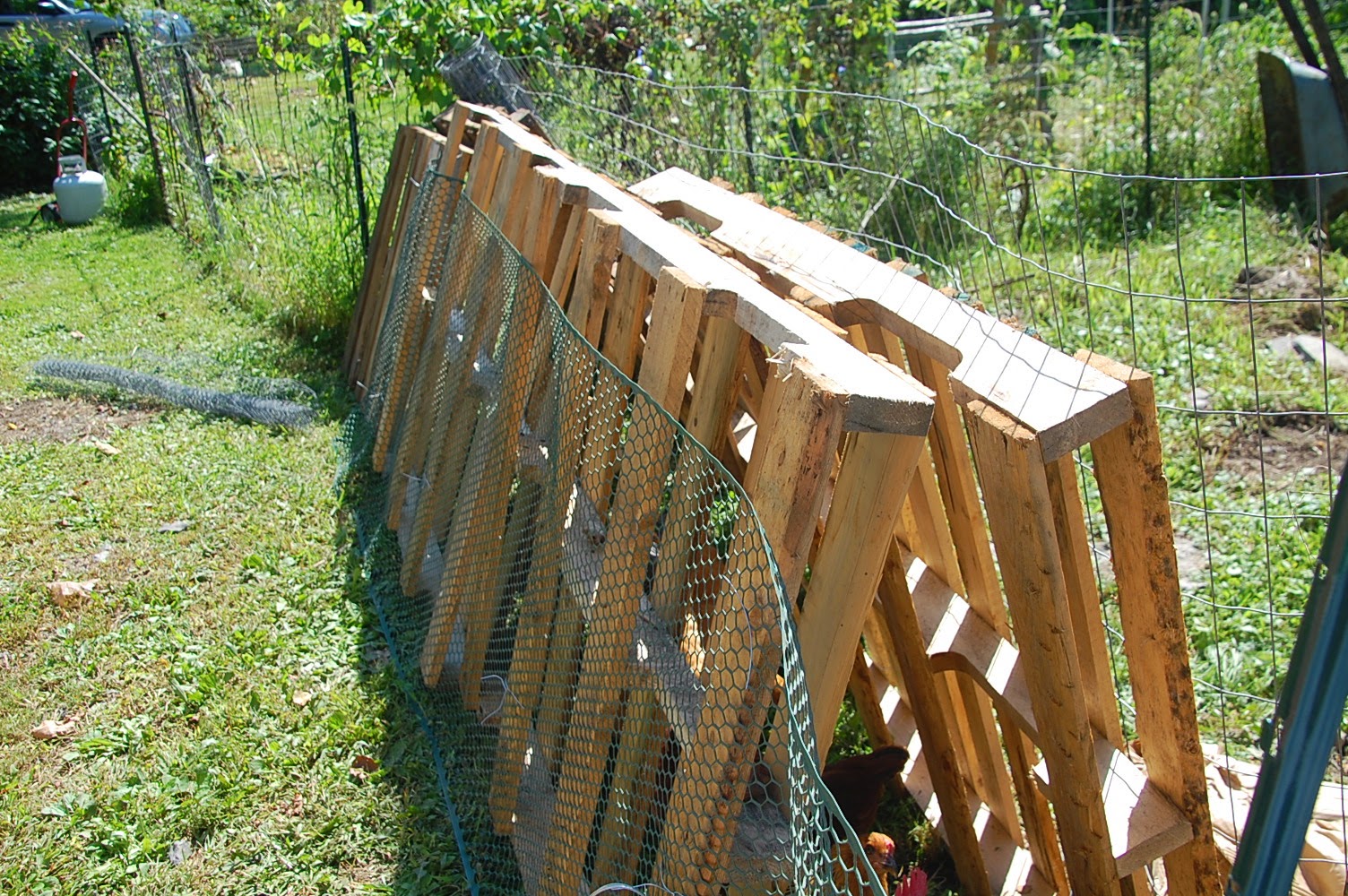 Within 5 minutes, one of the buff girls squeezed out through the slats, so we had to cover the pallets with the fencing. 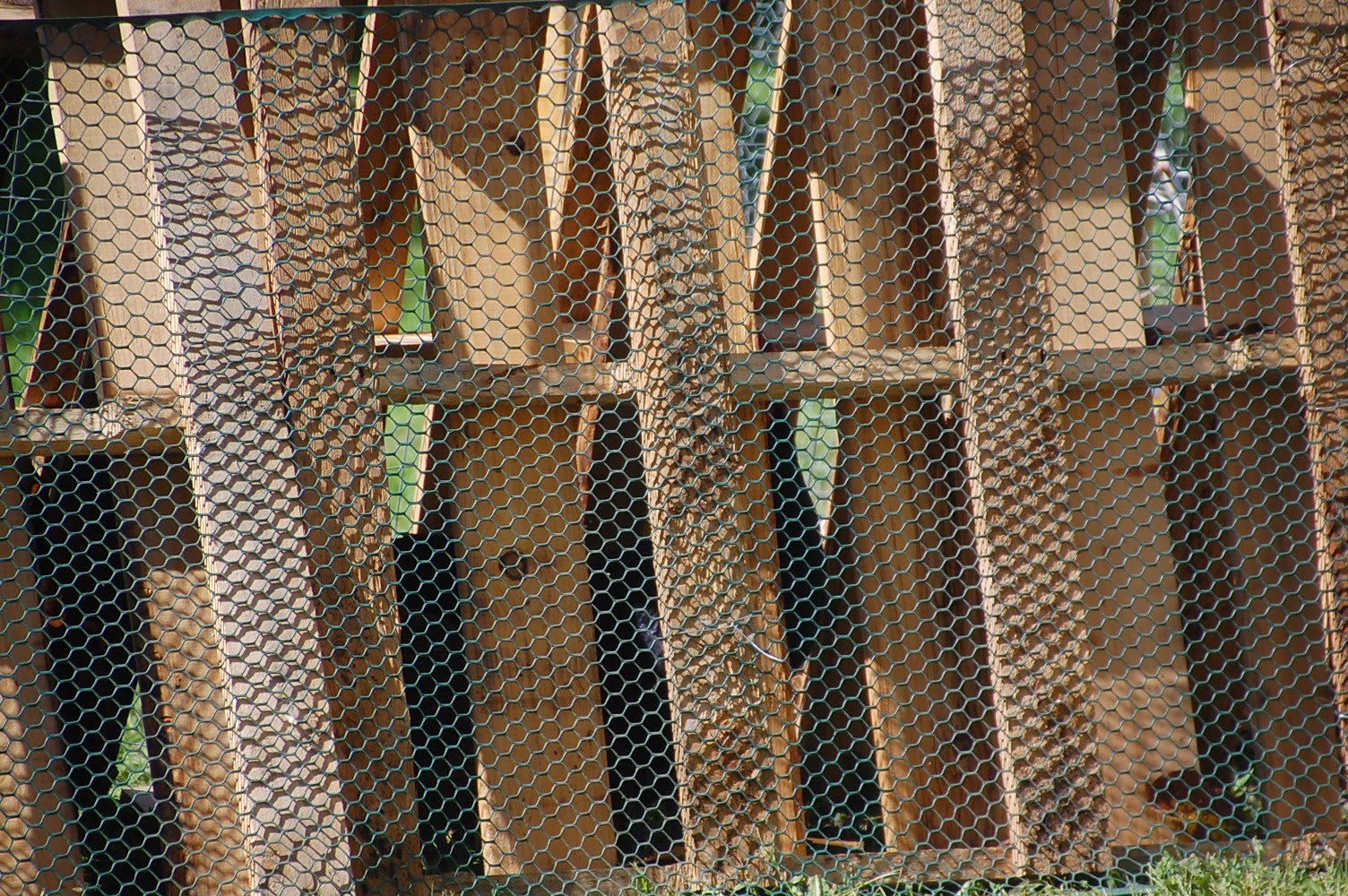 The garden got out of hand, as they sometimes do at the end of summer.
Here is where the tunnel opens into the garden. 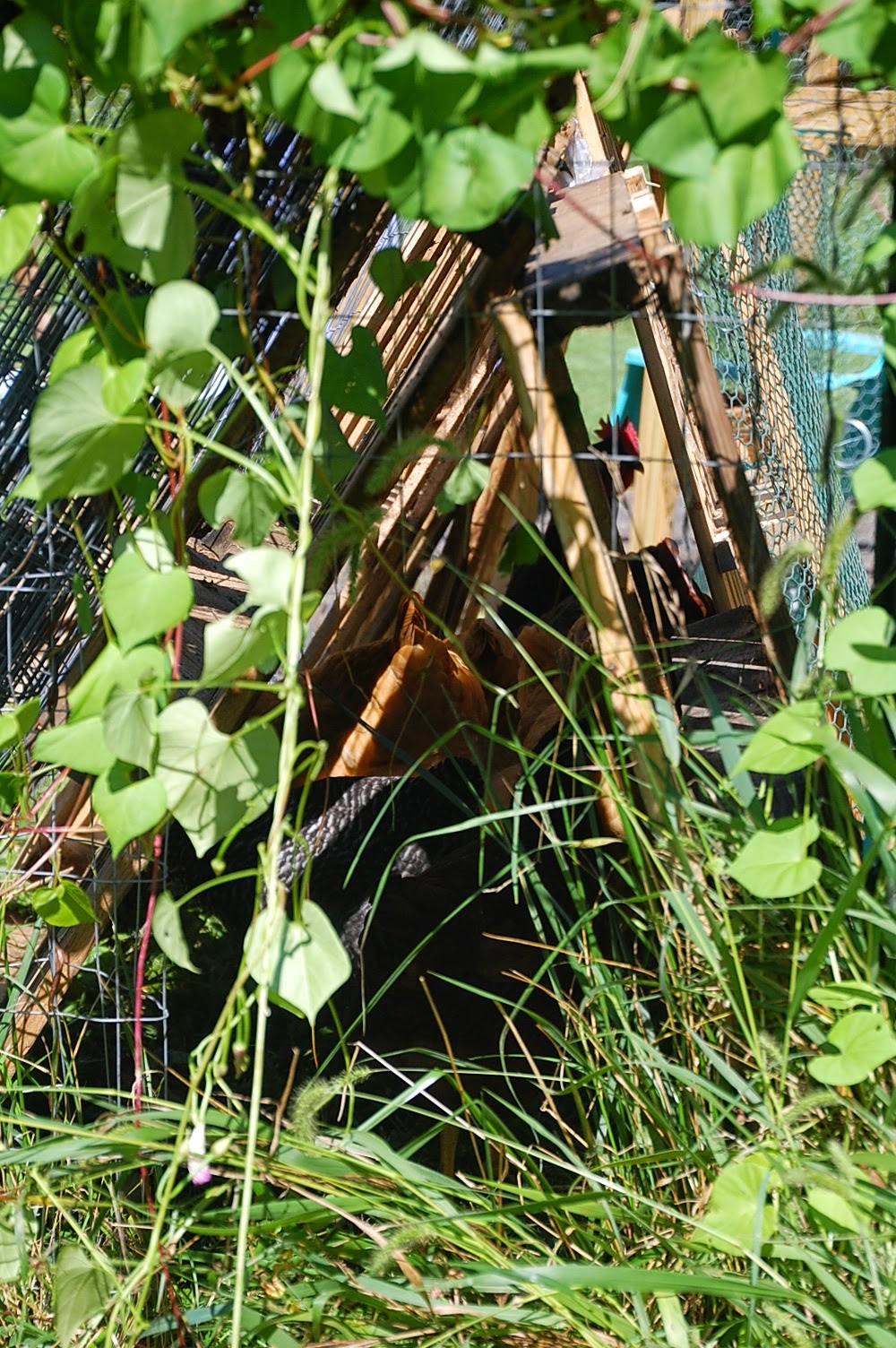 The flock stayed in the tunnel for most of the day.
They weren't quite sure what to do with that big open space at the end of the tunnel. 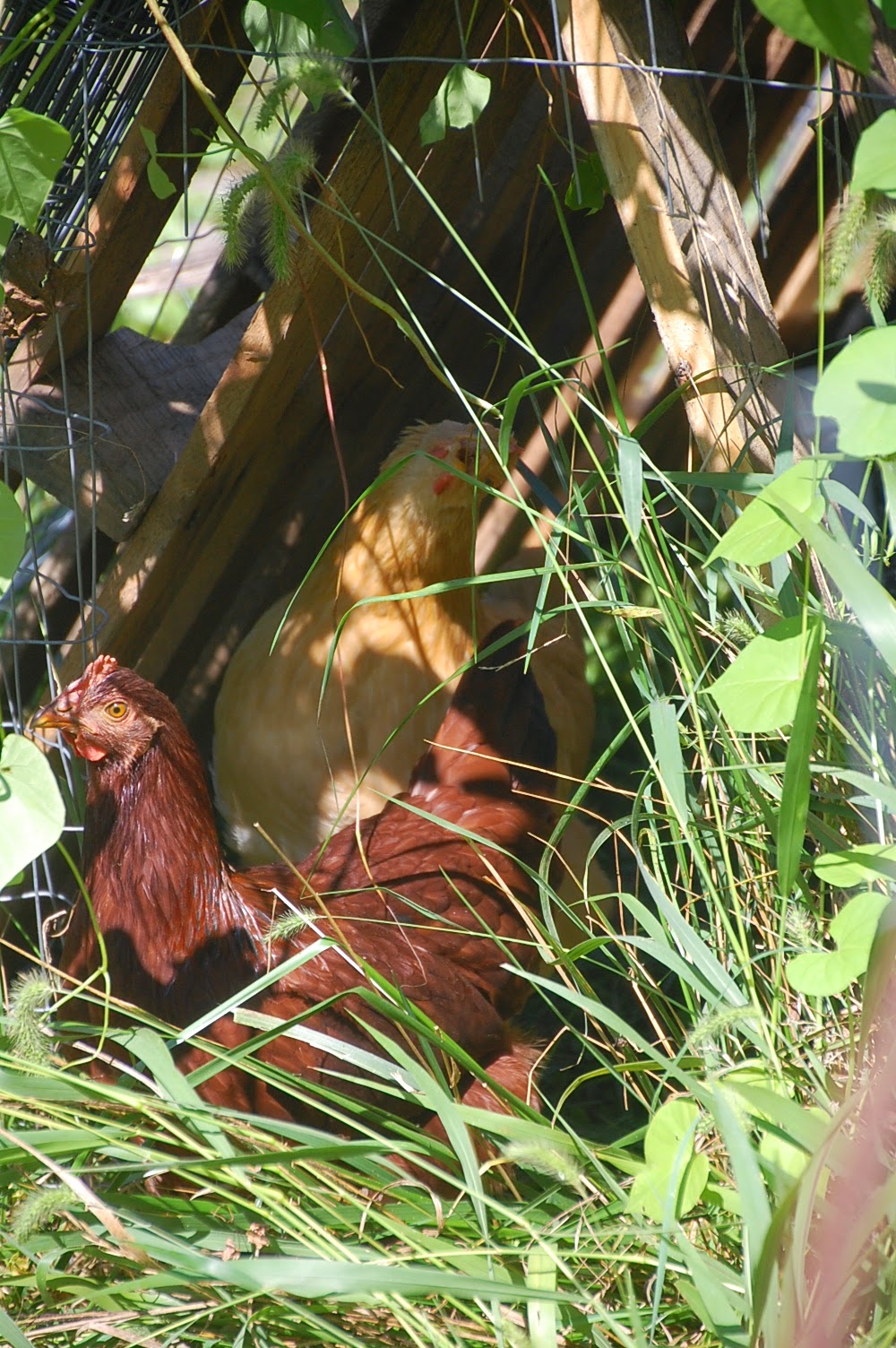 A few of them did get about three feet into the garden, but they didn't stay long. 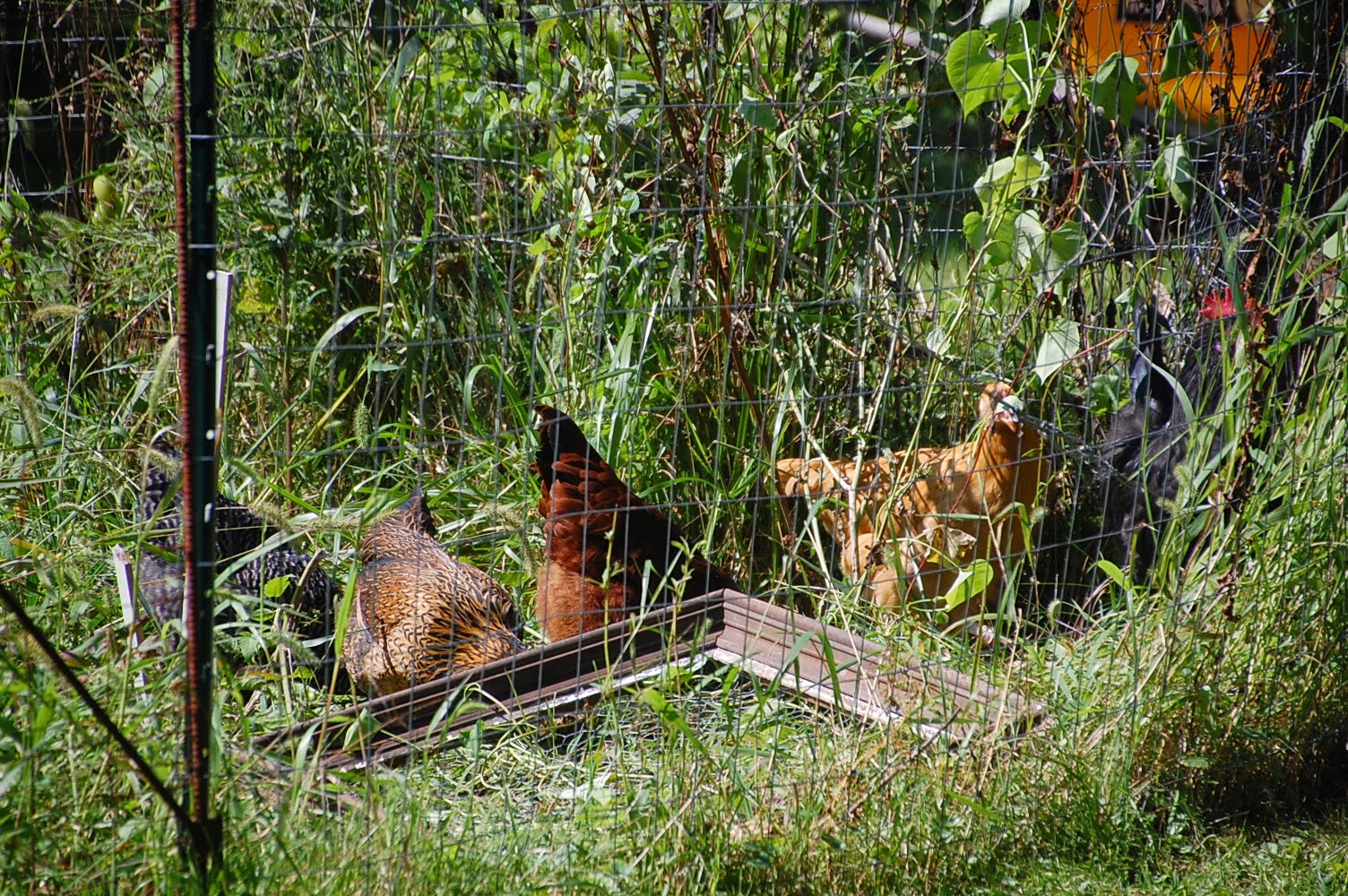 I read about a man in England, who had "chunnels" made from wire, all over his property, moving his chickens around, to "work the land". 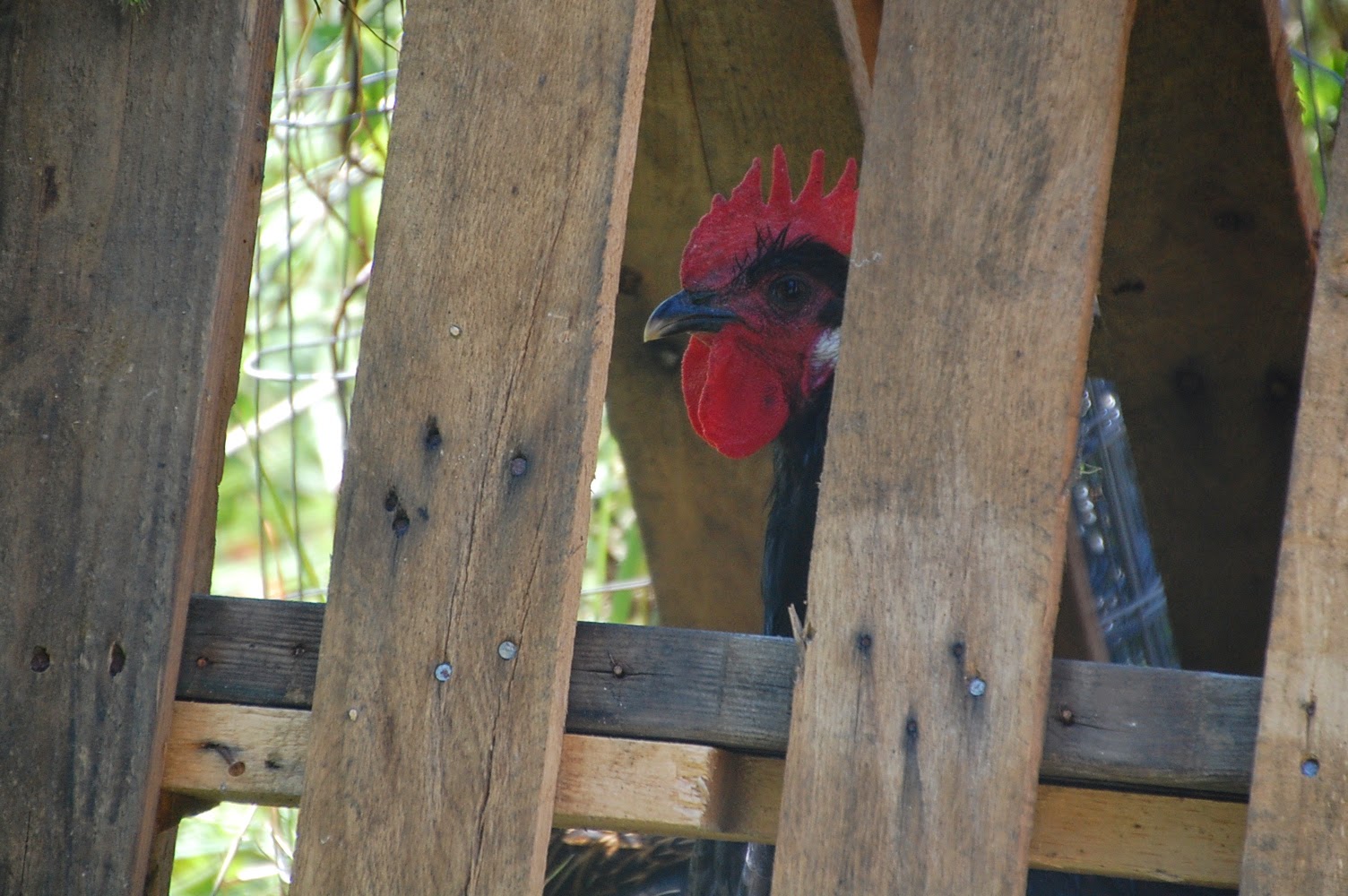 I told the girls they weren't living for free, that they had to make better use  of their time. 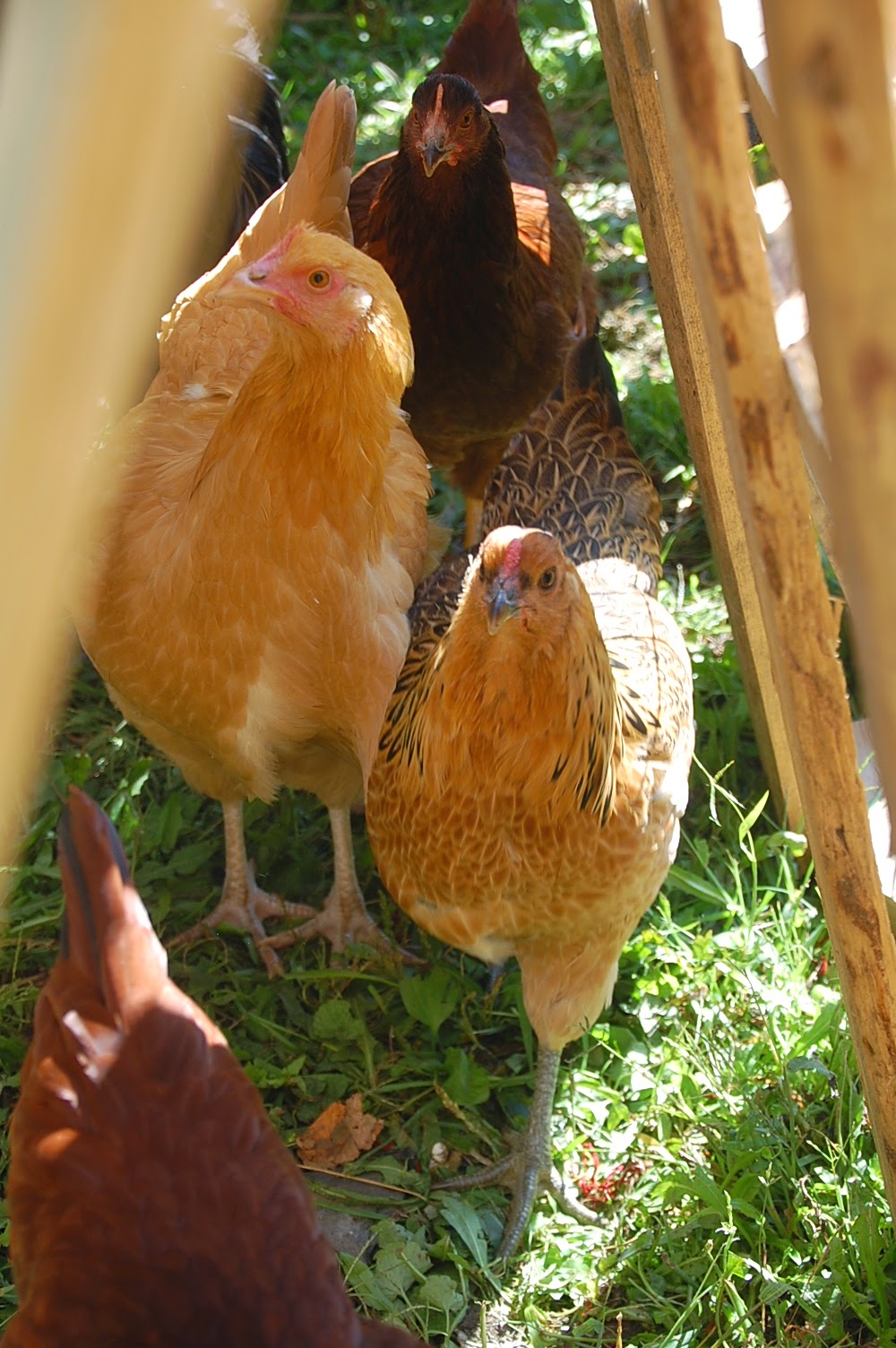 I explained that I would really like the garden to be cleaned up, sometime before  Thanksgiving. 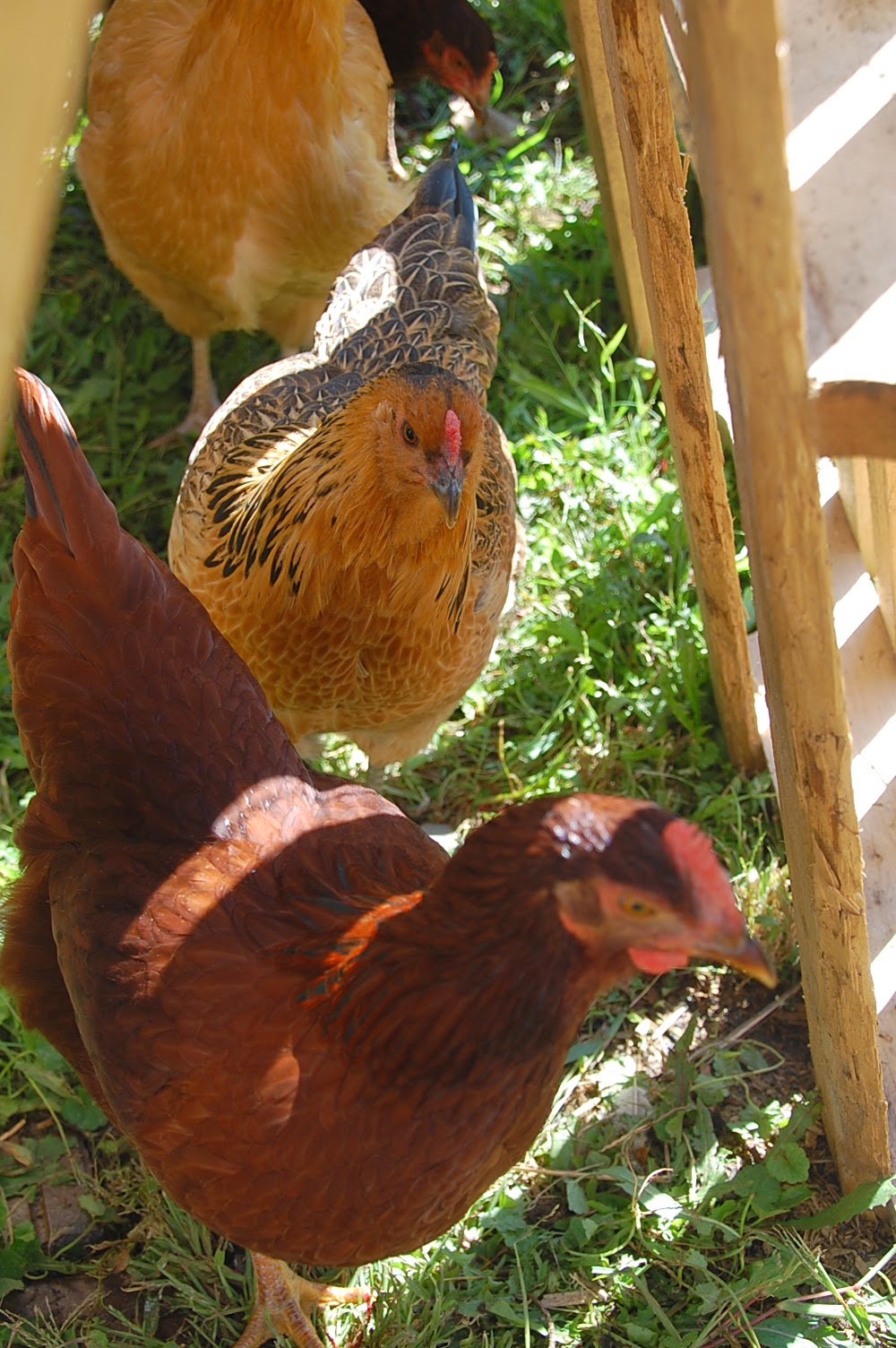 Which means that you need to work yourself out of the tunnel, at some point. 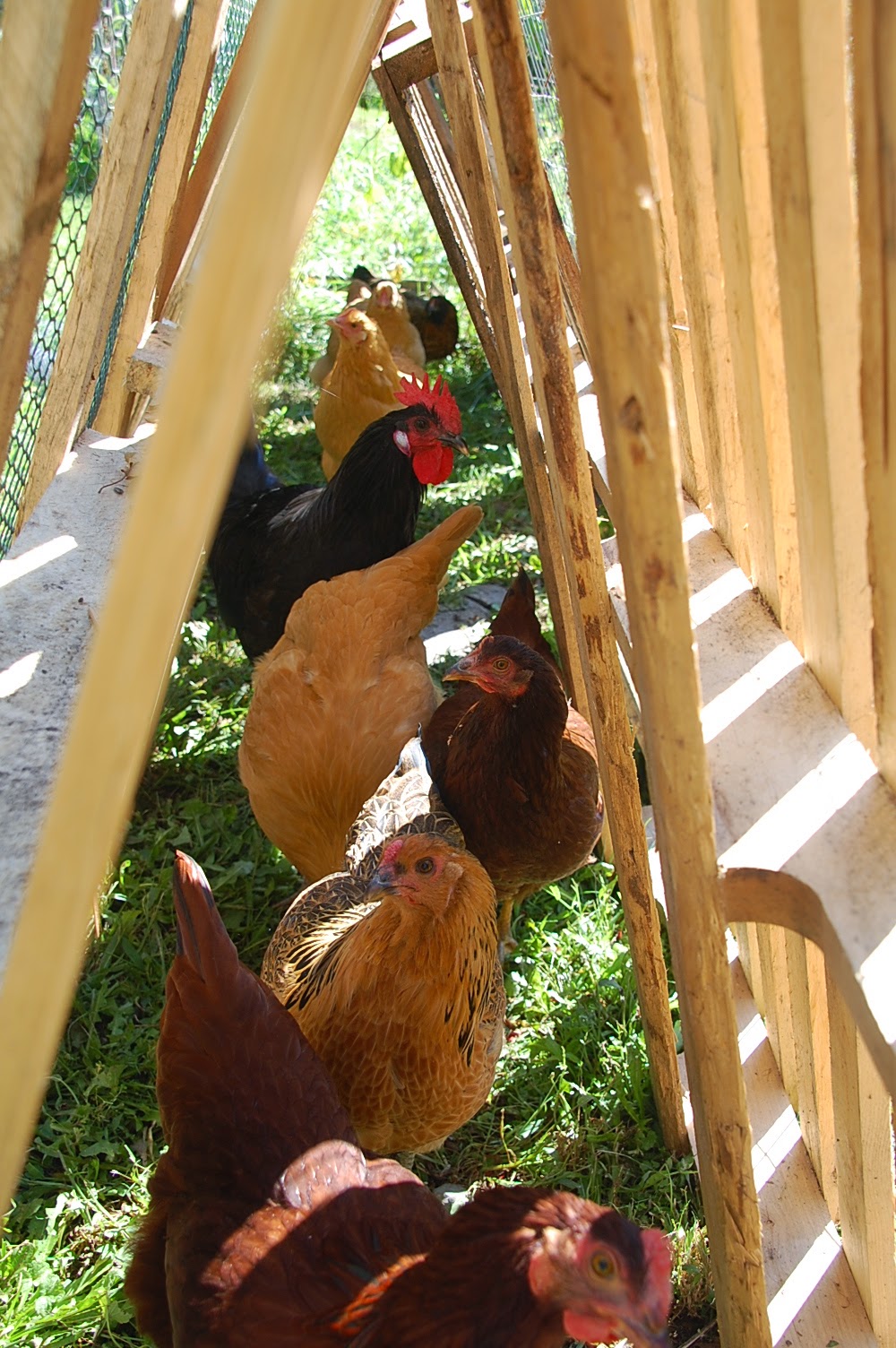 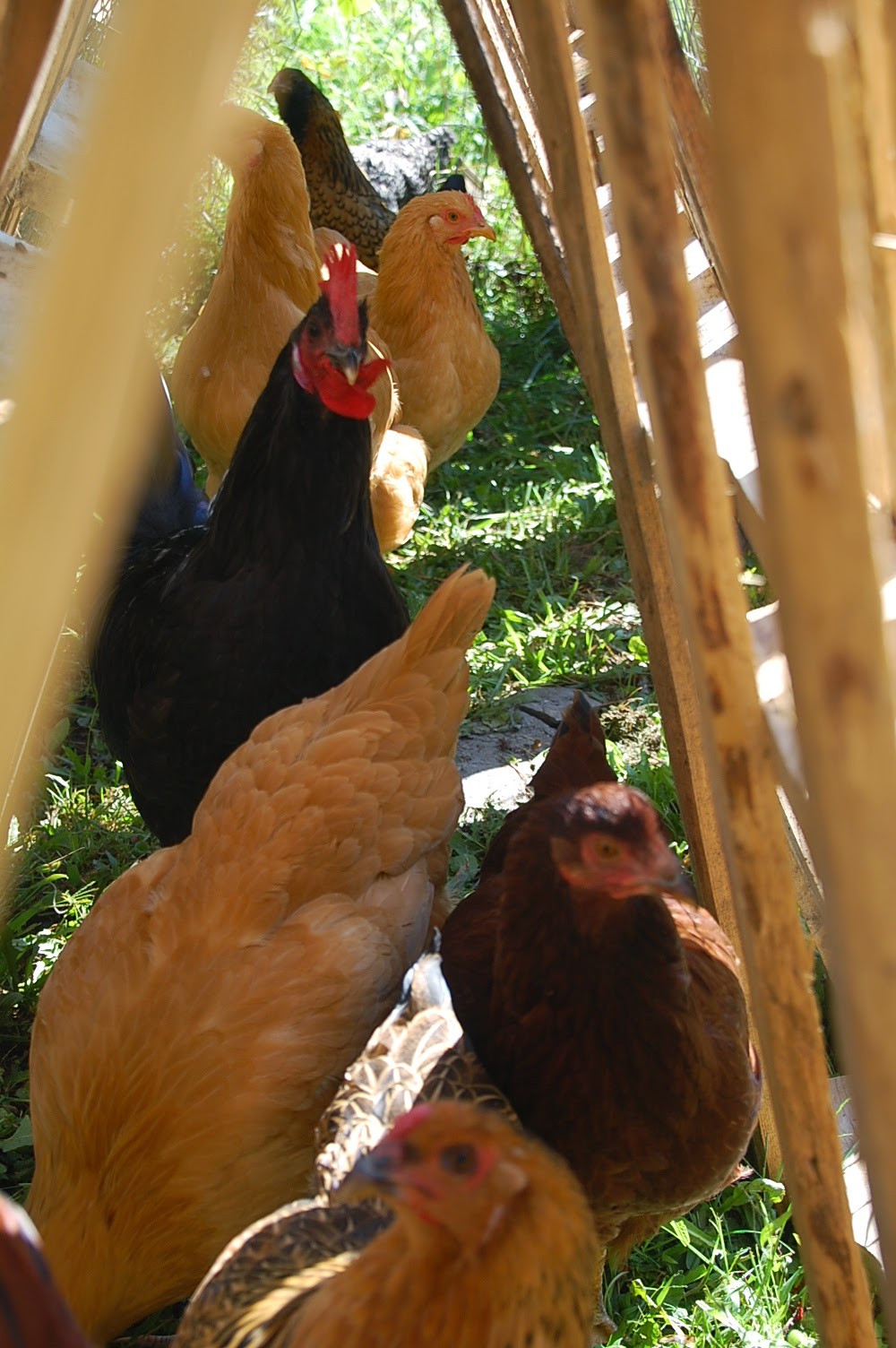 Bart says, " I'll tell them, but first we have to make sure we eat every bug in this tunnel." 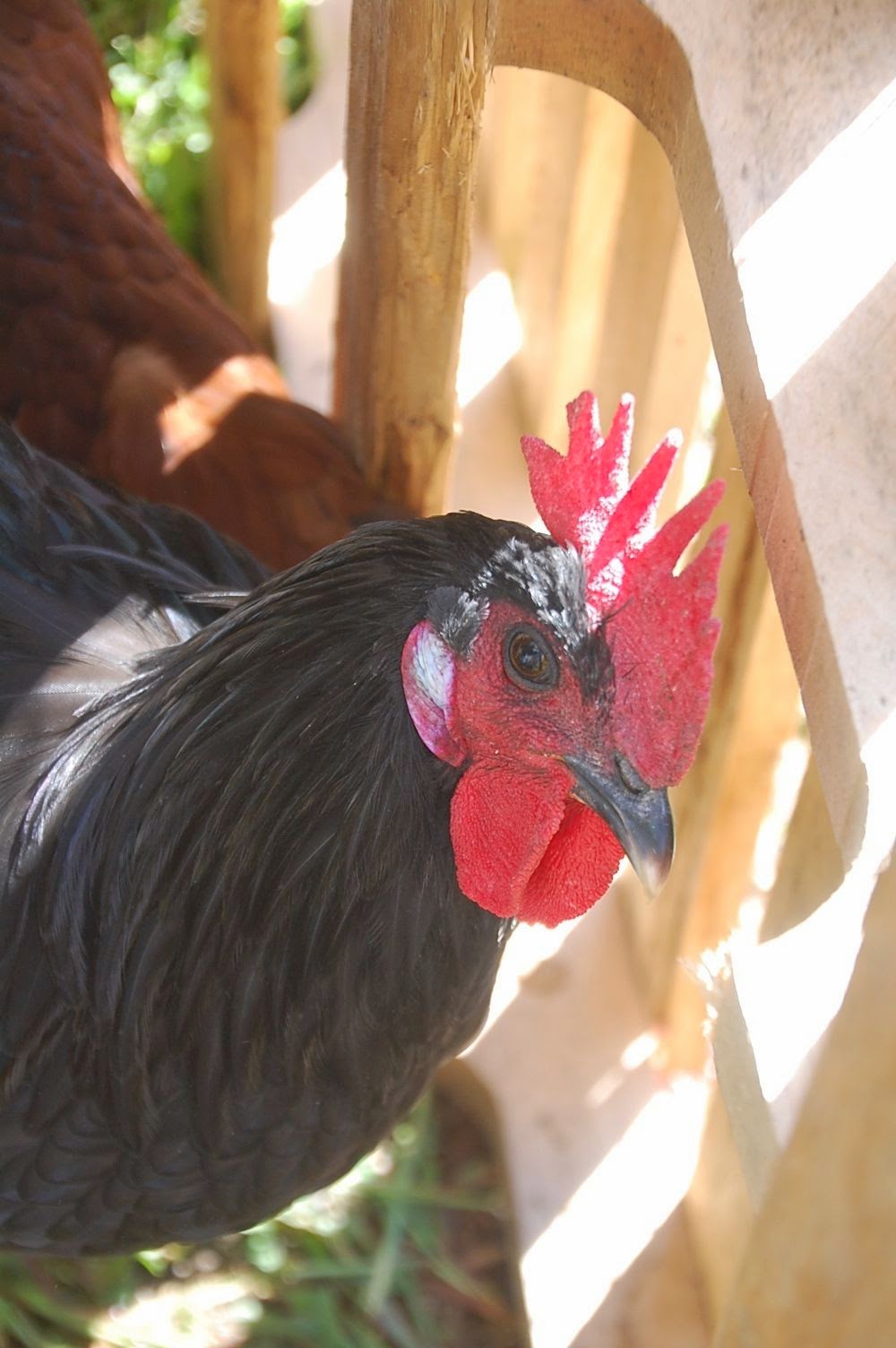 I know how you feel. I had an aneurysm repaired in 1996 - and this summer I have been plagued with headaches. So I worry. Been the ENT route and trying another one - but the wait to get a referral to get an appointment with a neurologist and get an MRI is excruciating. Headache seems to be all about ruling things out.

Hope your ENT gives you some relief (stay away from Afrin - the rebound effect is terrible).

You are a strong lady, Hilary. I can certainly understand if you have bad days and just want to shut the world out. I really hope this pain comes to an end soon for you. I really do. I had to take a second look at this contraption you built for the chickens. I wasn't quite sure what you were doing. Anyway, hope they figured it out. They sure are cute. :) Hugs, Deb

I hesitate to make suggestions, because people who've been suffering for a while have already tried just about everything, but I'll thow this out, just in case: A friend was suffering from intractable migraines and couldn't get relief. They found she had a rare kind of sinus infection that was wayyyyy up there (not your run-of-the-mill infection). It required some specialized antibiotics and a cleanout using special tools, but it worked. I hope they find a solution for you.

what do i know but it seems as if the Afrin making things worse proves the sinuses are involved .. good news that .. hopefully the ENT can help ... i still think stress plays into this but then i blame stress for everything ... you can blame it for this comment .. i would xo

I am so sorry that the headache is still plaguing you. Thank you for the update on the MRI, I was wondering and you don't even know me! LOL My chickens didn't like open spaces, lots of predatory hawks out there this time of year. I hope the ENT has some answers for you.

I can't imagine that kind of constant pain. I would go mad. I love it when doctors tell me they are stumped. Not. Chickens are not fans of change, are they? No matter how we try to add quality to their life....your girls are really lovely.

I love the chicken pictures and story! Perhaps you could make it into a little picture book for the baby. :-)

Chickens are so pretty! Im sorry your head is still such a trial, youd think they could fix things with all our advances. Id been having terrible headaches and it turned out to be high blood pressure. Im sure you've ruled that out already but you never know. I hope you find some relief soon. Cheers!