Work back and forth on remaining sts knit the k, and purl the p.
Work until this piece is 2" long.
Bind off loosely.

I got this from The Rug Weaver's Source Book, the chapter by Inga Krook, and also Handwoven Magazine Volume IV, number 3, Summer 1983.
I also had inspiration from a fellow weaver, Lee Greenewalt, from Shoreham, Vt, who makes fantastic double binding rugs.
Here is mine: 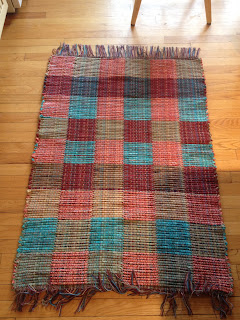 My rug was 32" wide, I wove it 56" long.......to allow for take up.
I used 495 threads of poly cotton rug warp, multi colored, randomly placed.....
My loom was four harness.
From Inga's instructions:
"The double binding technique is a 4 shaft block weave.  The threading has a repeat of 4 threads.  Block I is 3,4,3,1.  Block II is 2,1,2,4.
These four threads are repeated as many times as the width of the block requires.  When you change from one block to the next, the fourth thread is left out to make the border line between the blocks sharper.  This leaves the tabby with a double thread in the same place, but it is of minor importance, as the tabby is used only in the beginning and at the end."

Two colors of fabric are used, alternately, on separate shuttles, taking care at the selvedges to cross the strips to lock them in.  When your block is high enough, change colors.
You could do this whole rug in two colors, or you could do it like I did mine, which is throwing caution to the winds, as usual.  I like the results better.  I changed both colors every time.

I cut my strips narrower than usual, since one color packs in under the other.

Once you get your loom threaded up, my advice is to just play with the colors, cause that is what makes this rug so much fun.
Email me if you have any questions: crazyasaloom@aol.com or ragrugs@crazyasaloom.com
Enjoy!!!!

Home
Subscribe to: Posts (Atom)
Welcome to my world.